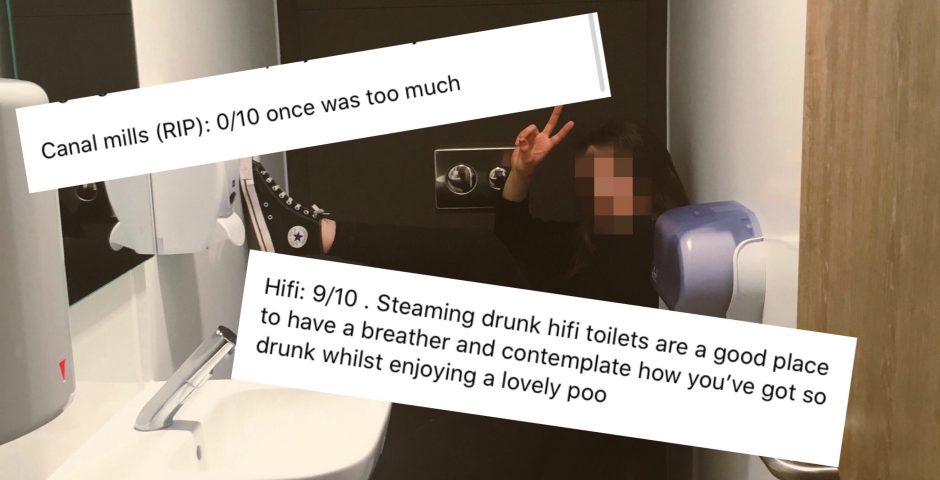 EXCLUSIVE: We spoke to the girl who rated her poo experience in every Leeds club

She even wrote us a poem

Last Thursday, an unknown man – subsequently dubbed "nightclub poo boy" or "poo boy" for short – submitted a LeedsFess comprising of an exhaustive and iconic ranking of the toilet facilities at nearly every Leeds nightclub. 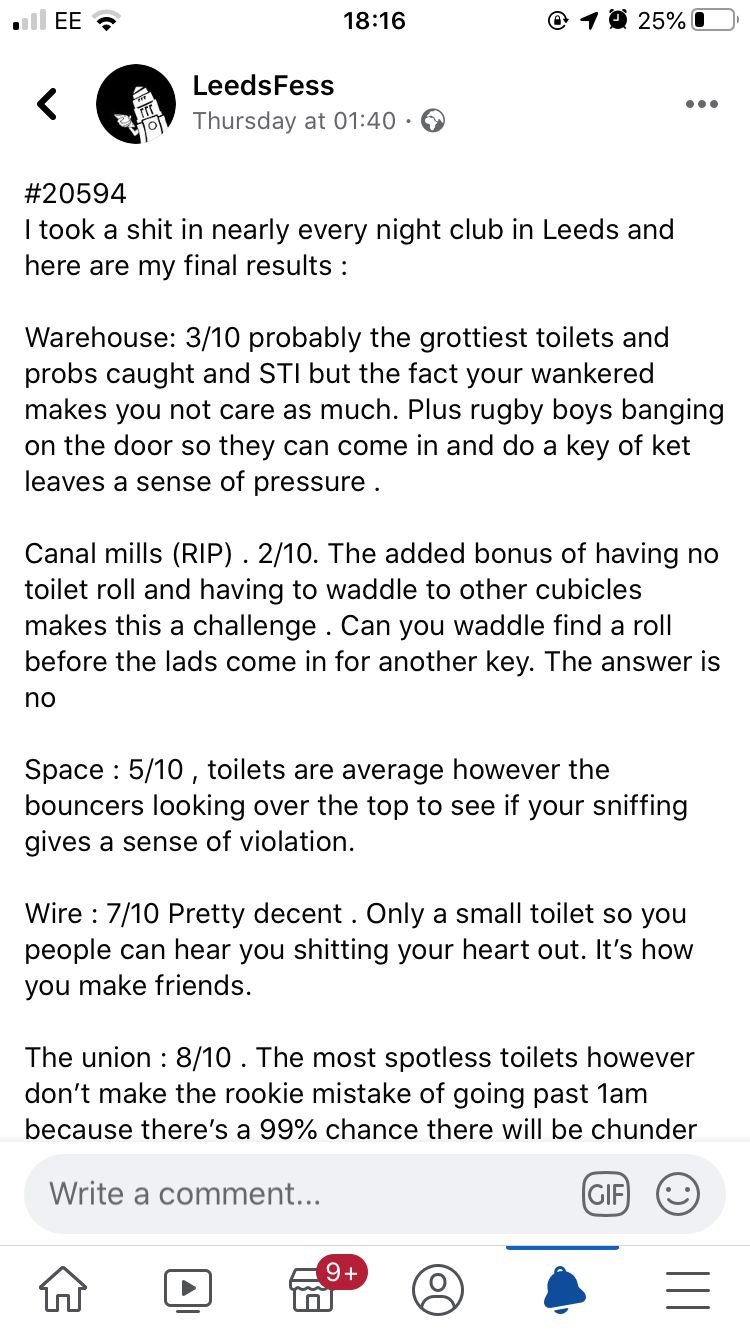 The post was a roaring success, boasting an impressive 660 likes and 257 comments.

We all thought that was it as far as poo-related reviewing was concerned – but lo and behold, a girls' version was soon published onto LeedsFess too. 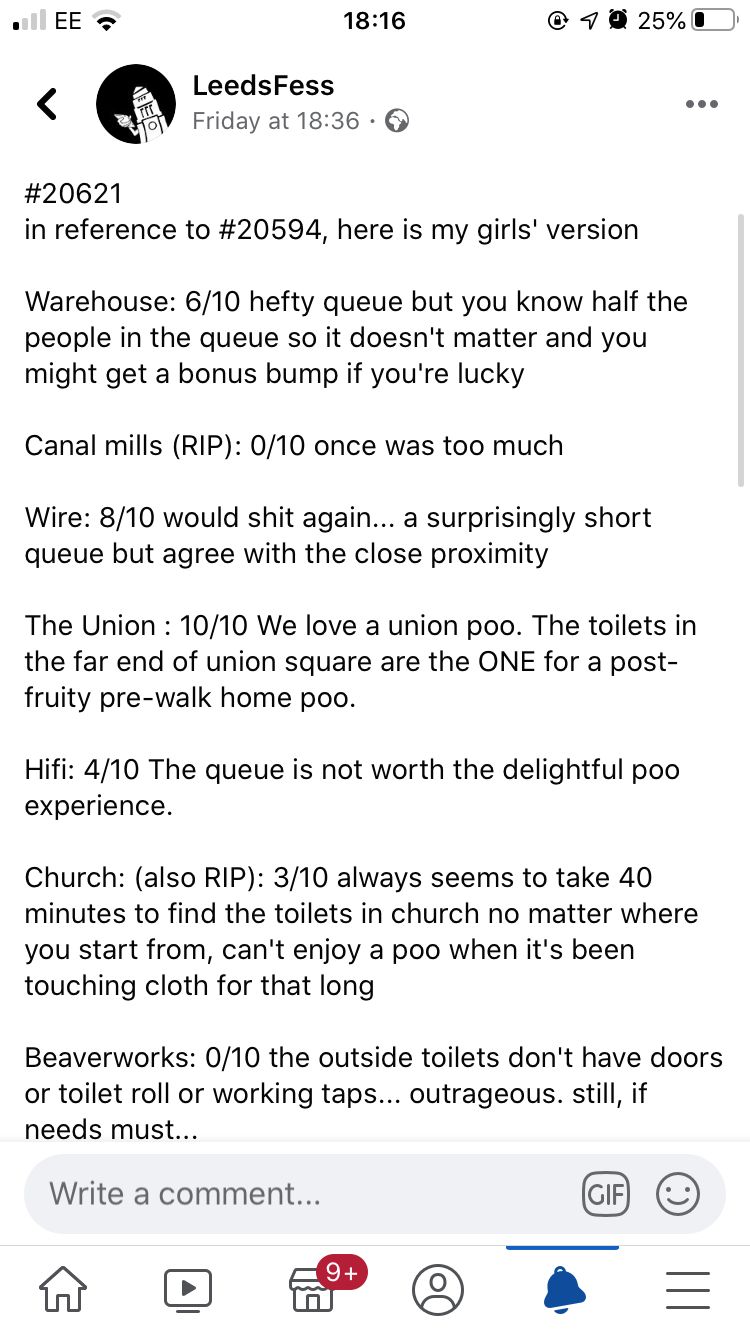 On Saturday, the plot thickened with a LeedsFess published from poo boy, asking poo girl for a drink. 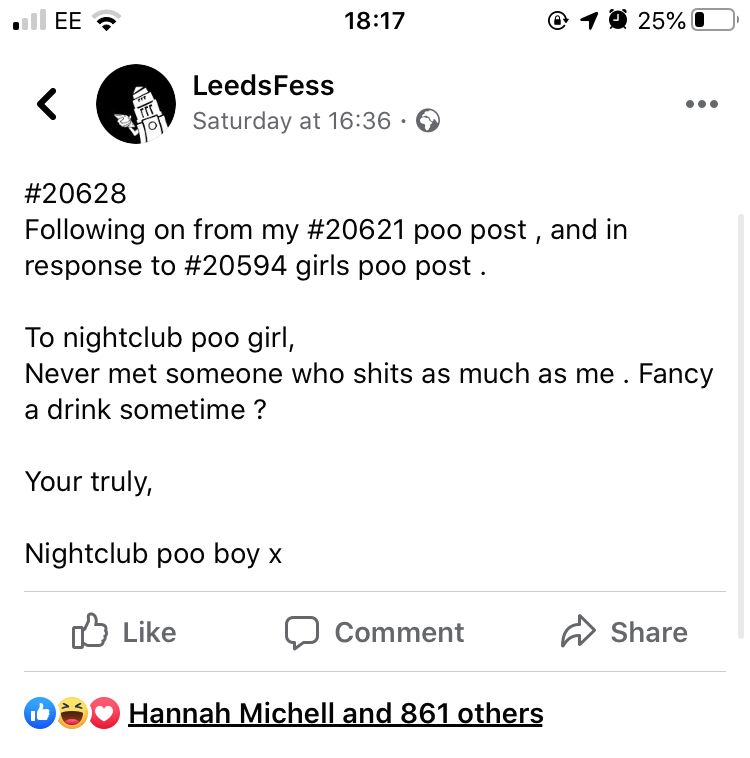 But then the scent goes cold. No further correspondence.

Until The Leeds Tab intervened and spoke to poo girl herself to get all the behind-the-scenes goss.

So how long has she been keeping tabs on all those poos in nightclub loos? "Since second year maybs??" she told The Leeds Tab. "I did write it in phone notes, but I have lots of ratings in my phone notes, like boys I've slept with, places to nap on campus, things like that."

We asked her what prompted her to send in her own rankings following the OG post. "The boy poo ratings angered me because obviously did not take into account queue times (Hifi I'm looking at u)."

Our thoughts turned to poo boy, and the blossoming romance between the pair. Though poo girl isn't quite sure what her ideal date with poo boy would be – "I detest dates", she says – she wouldn't be opposed to "introducing him to the unrivalled pleasure that is the loos right next to Old Bar".

"I submitted an ode to poo boy on Saturday to LeedsFess and it's still not been posted and I'm really sad." Fortunately, The Tab are here to help, and we can exclusively reveal the poem here in full:

"I never thought I'd meet someone who

Loves a poo as much as you

A cheeky poo to spice up your night

Some people think it's hard to admit

But what I say is we all shit…

We've found that mostly we agree,

We know the union's the place to be.

I'm questioning if you're my kind of guy,

You've been to Space, maybe that's why,

But what if this is your destiny,

If we never bet it would be a shame,

So tell me poo boy, what's your name?"

Shakespeare could never. Poo boy, if you're reading this – do the honourable thing and slide into our DMs so we can set you two up properly.

Know something? Are you THE Poo Boy? Send tips to [email protected]

Want to break stories like these? Join the team – no experience required! DM us via @thetab_leeds on Insta or The Tab Leeds on Facebook.