Why have they not done this on Bake Off yet?

Picture this: Your mate has told you about a really cool house party his course-mate is throwing this Saturday – you walk in, six beers in hand, and find 20 fully grown adults stood around five different Colin the Caterpillar cakes discussing to what extent Connie the caterpillar is the new feminist icon we didn't even know we needed.

Oh, and there's a girl in the corner taking notes on her phone for some kind of article she wants to write after. 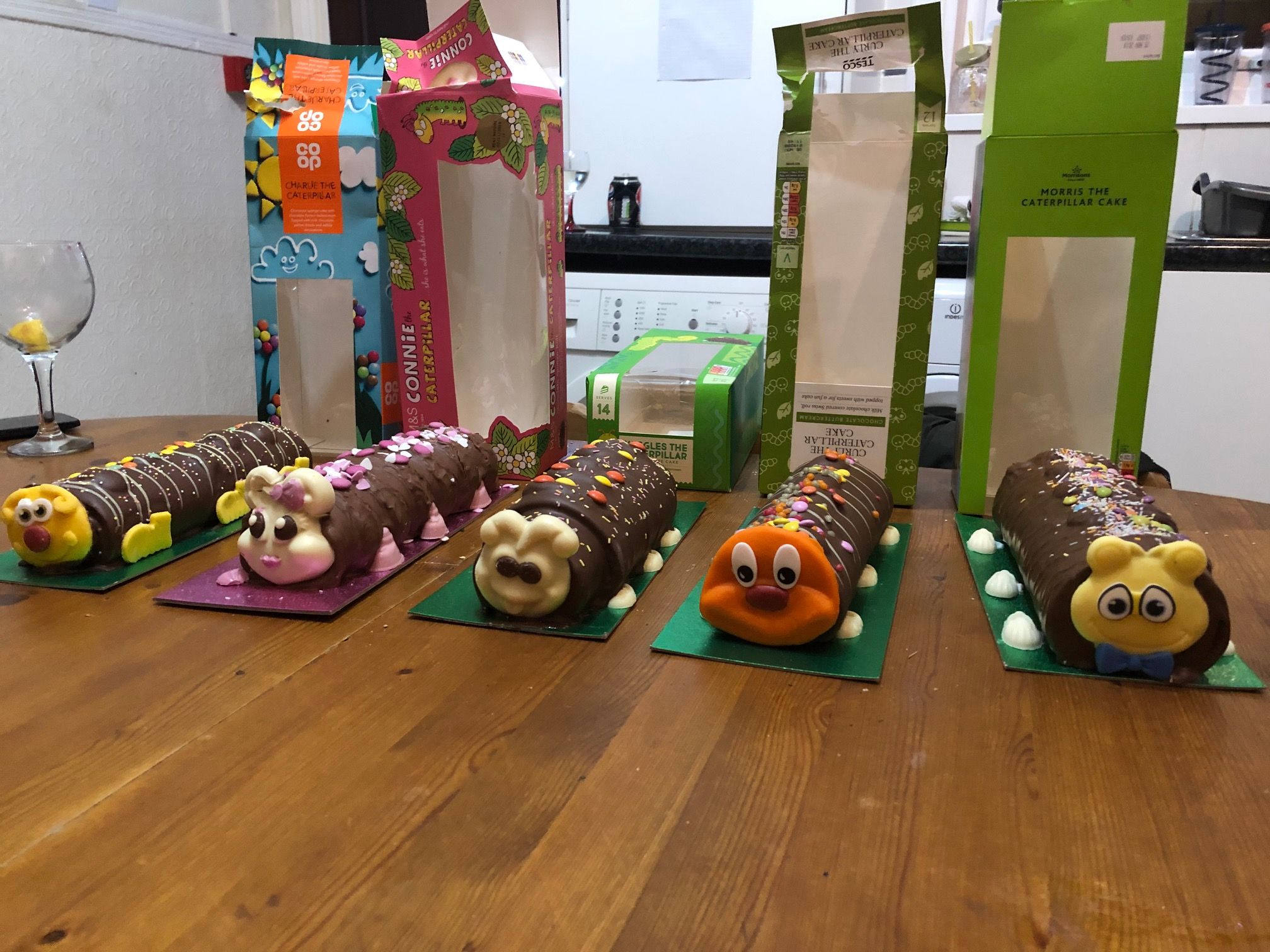 Just like how baby boomers pride themselves on casual homophobia and their inability to talk openly about mental health, Colin the Caterpillar is the pride of our generation. He's the OG, Britain's MVP, and could probably even get us out of this Brexit mess if only he wasn't made of inanimate food stuff.

Colin the Caterpillar was originally only sold in Marks & Spencer, but in the last few years other supermarket chains have been competing to make the best Colin dupe for their own bakery shelves. 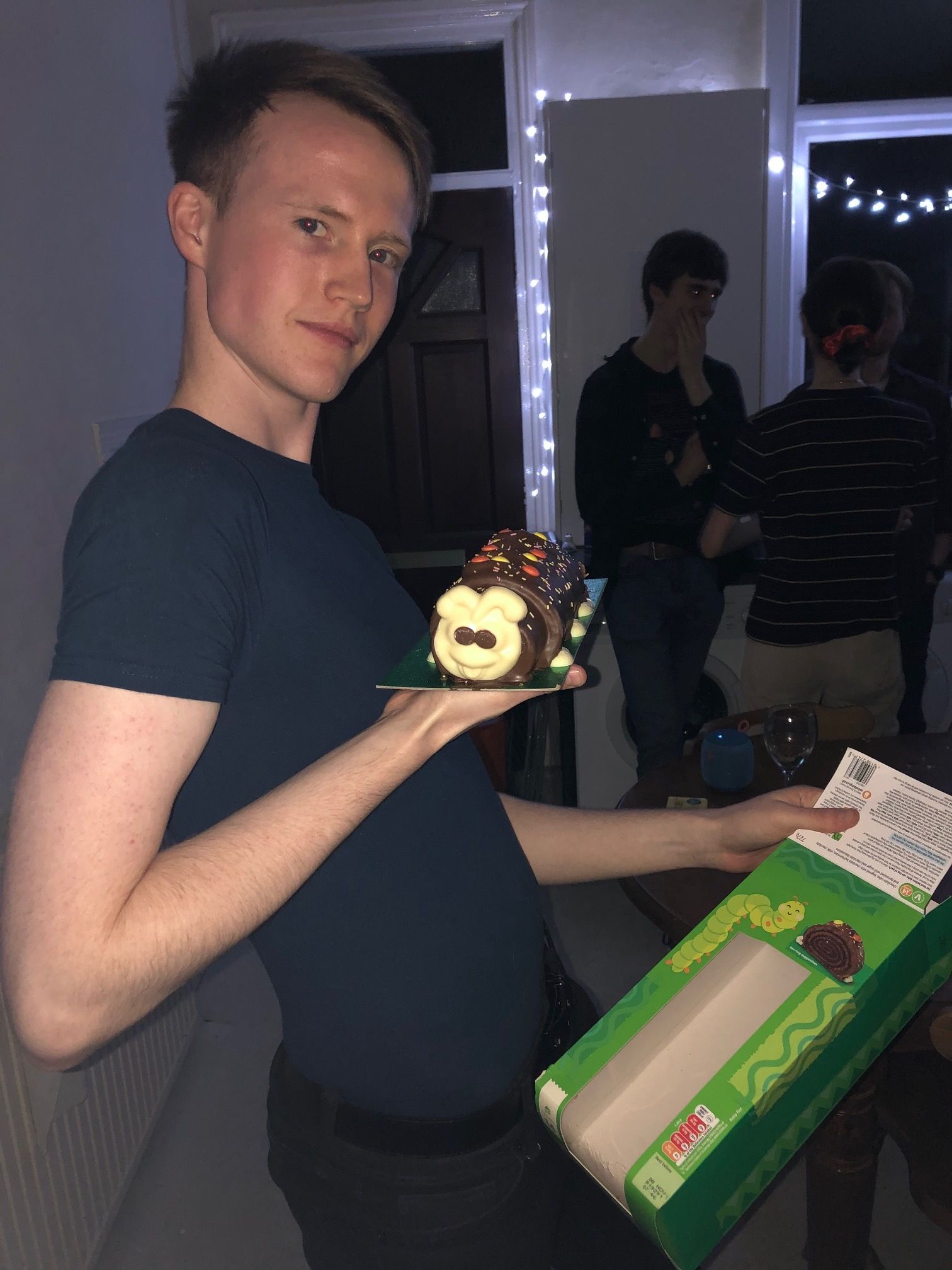 As well as Connie, we got stuck into Wiggles from Sainsbury's, Morris from Morrisons, Curly from Tesco, and Charlie from the Co-op.

And here's what we thought.

Being Colin's other half, we had high hopes for Connie the Caterpillar – and it's safe to say we weren't disappointed. As well as her delicious chocolate shell and moist sponge filling that was the perfect balance of light and fluffy, Connie's sprinkles were evenly distributed averaging at three pink Smarties per cake slice. 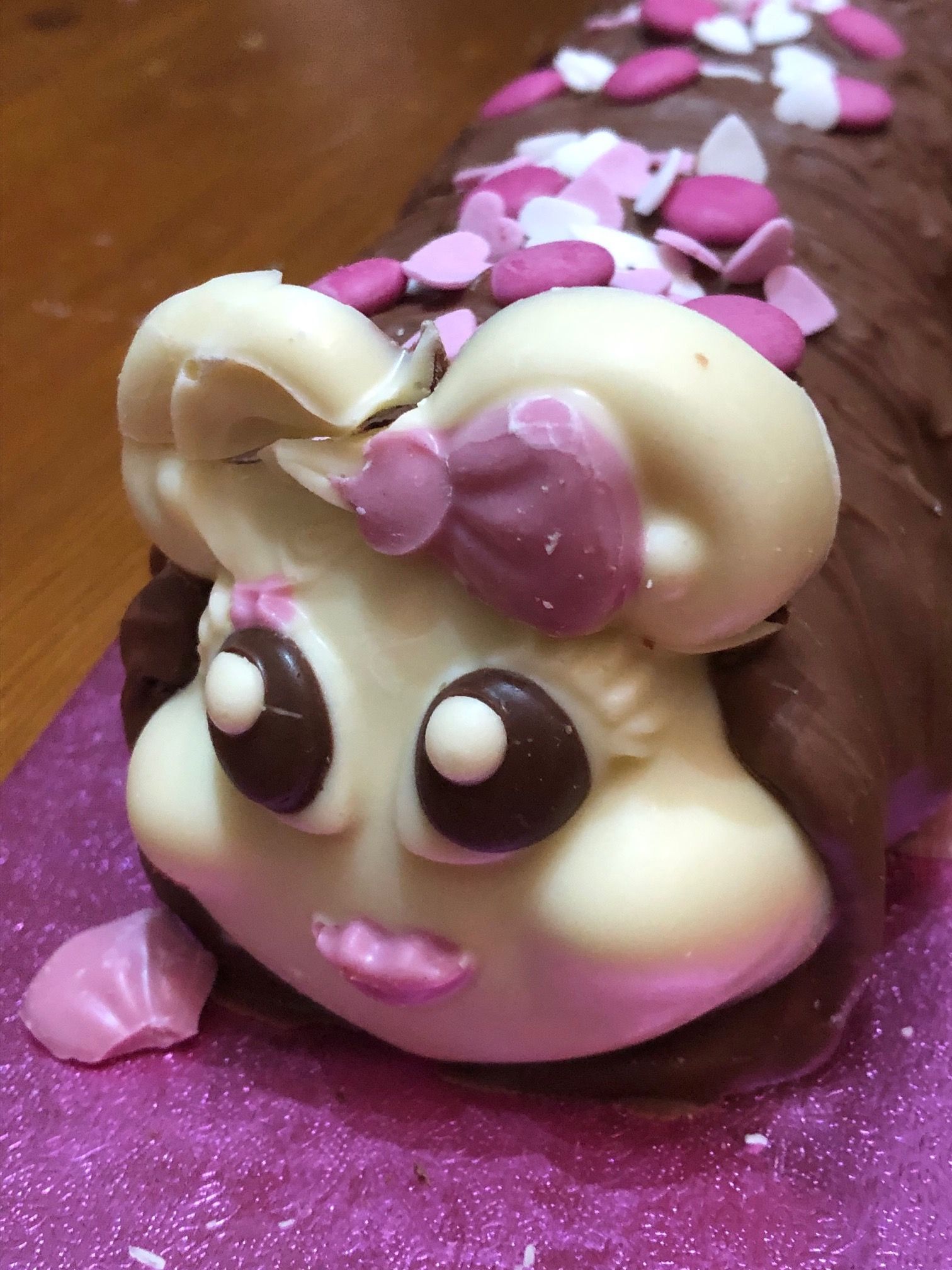 The more we looked at Connie, the more we thought she was a feminist icon. With her don't-fuck-with-me eyes and the fact that she was wearing six little ankle boots, we decided we would vote for literally whatever she was standing for.

Unfortunately, after a while, we also noticed that Connie did slightly resemble more of a rabbit than a caterpillar. Soz, Connie.

Unlike many of his caterpillar counterparts, Wiggles had his own thing going on. A big middle finger to the alliteration that had been used so many times before, Wiggles was unique; he has his own brand and he knows exactly what he wants, when he wants it.

Although the standard caterpillar cake shape, Wiggles did have a bit of an extra something something going on, but that's okay! In. This. House. We. Do. Not. Body. Shame. 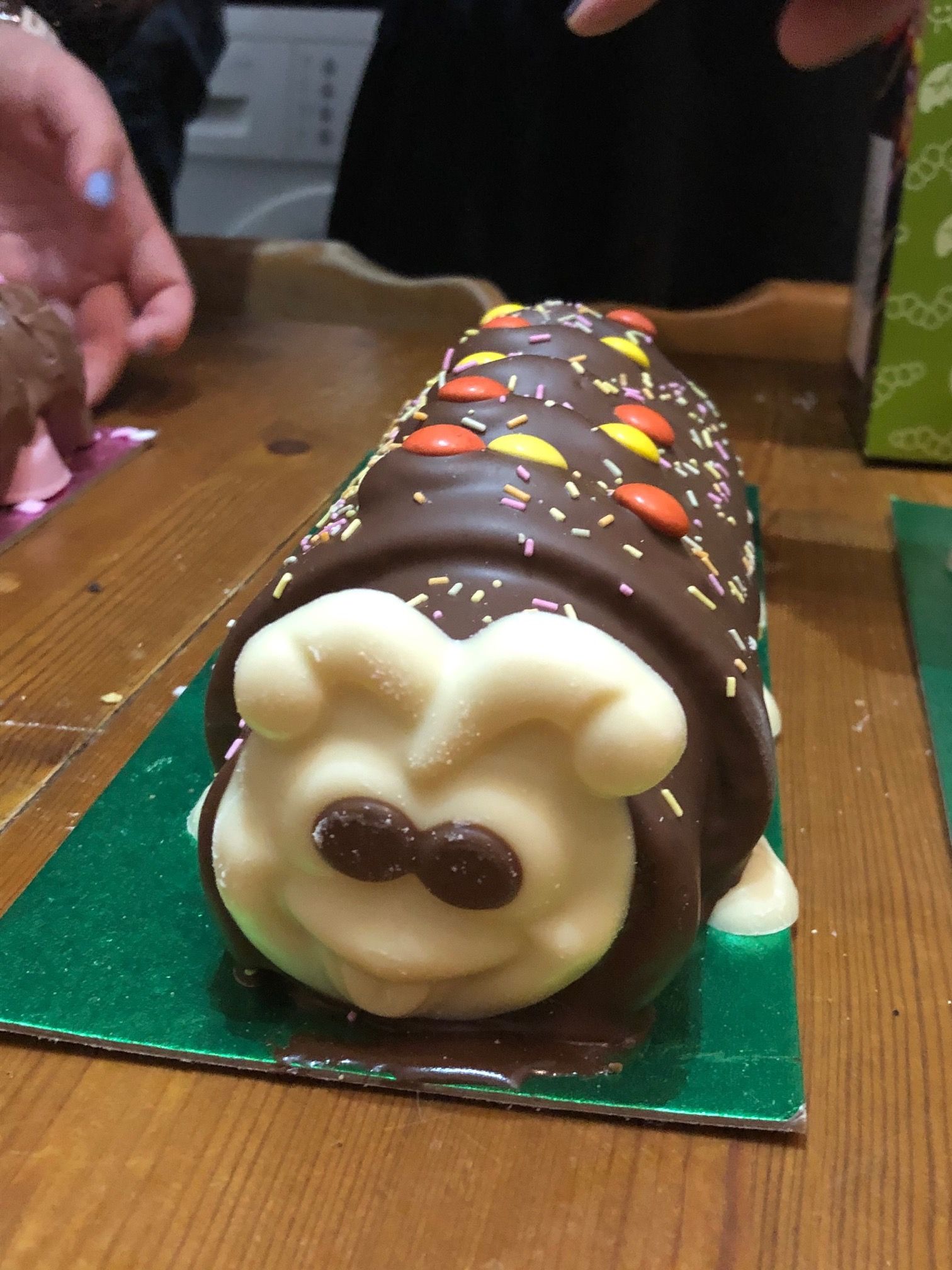 In terms of taste, Wiggles was moist, but his sponge wasn't as sweet as Connie's. His decorations were a bit shit as well, and he was definitely lacking in terms of sprinkles.

In fact, we thought the box was decorated better than the cake itself and it even had a "make your own mask" bit on the back. Delicious and interactive! It's a thumbs up from us. 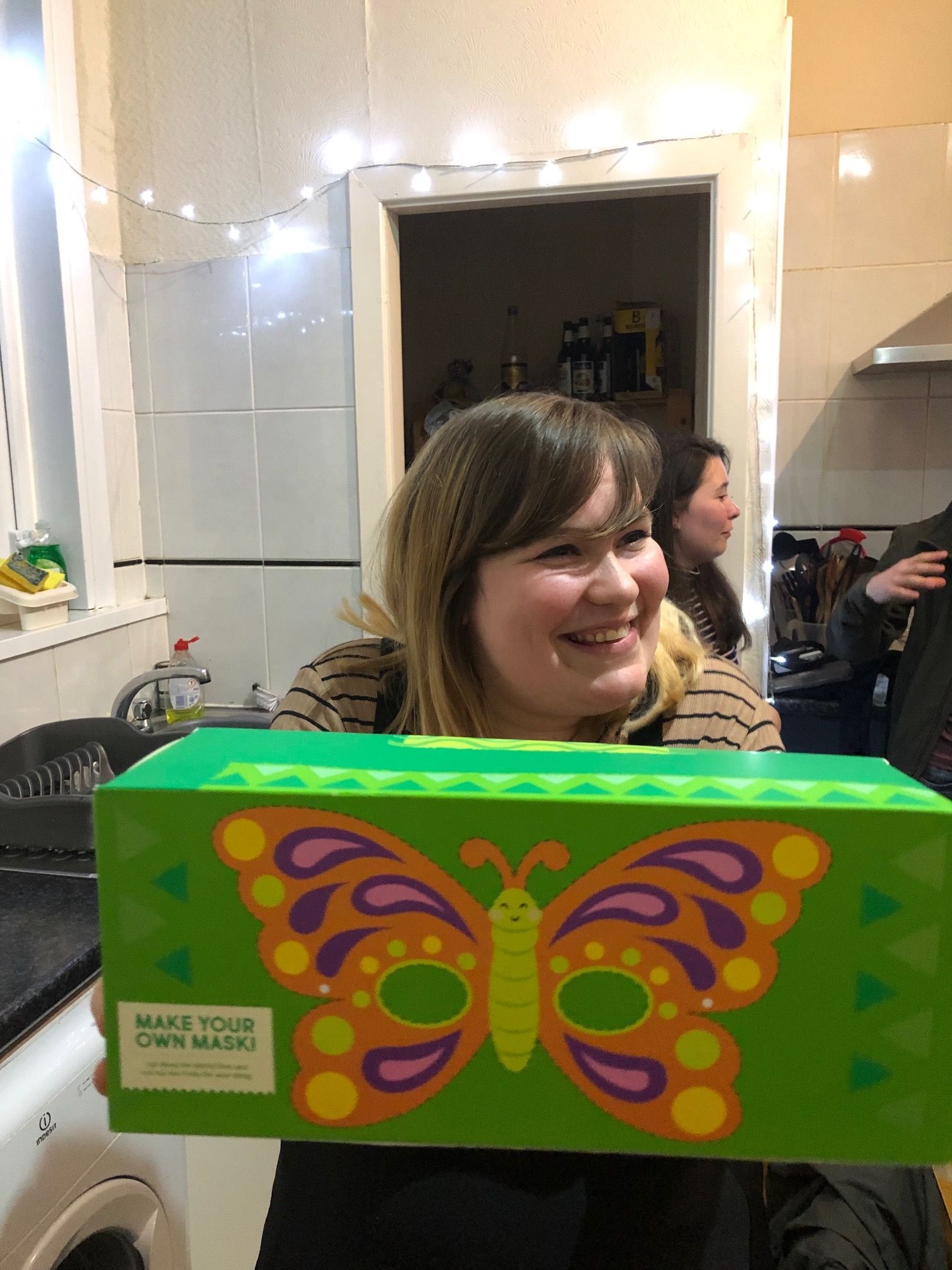 One look at Morris and we knew we were in for a good time, the kid had his very own bowtie and was absolutely shit covered in hundreds and thousands.

Look at that little face! He just looked happy to be there, tbh. 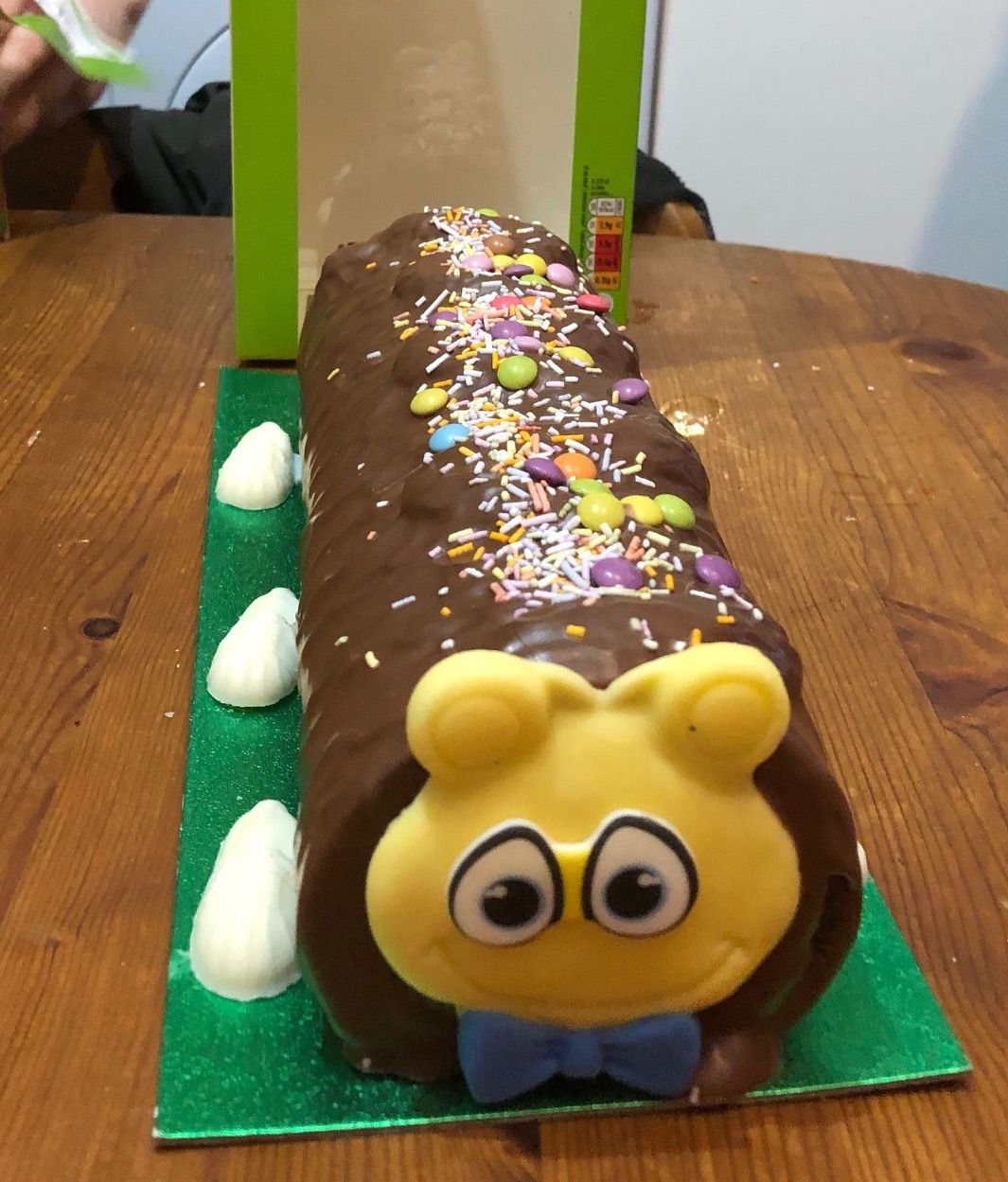 Sadly, Morris didn't deliver in the taste test. As well as being a bit dry and for some reason FRUITY, he tasted like he was made from what we could only describe as fake chocolate. Not that Morris gave a shit, though – he was just happy to be out the house.

Right, I'm not being dramatic but Curly the caterpillar was fucking terrifying. Honest to god, I can't wait to delete this photo from my camera roll. This is the kind of shit you see mid-sleep paralysis standing at the bottom of your bed. 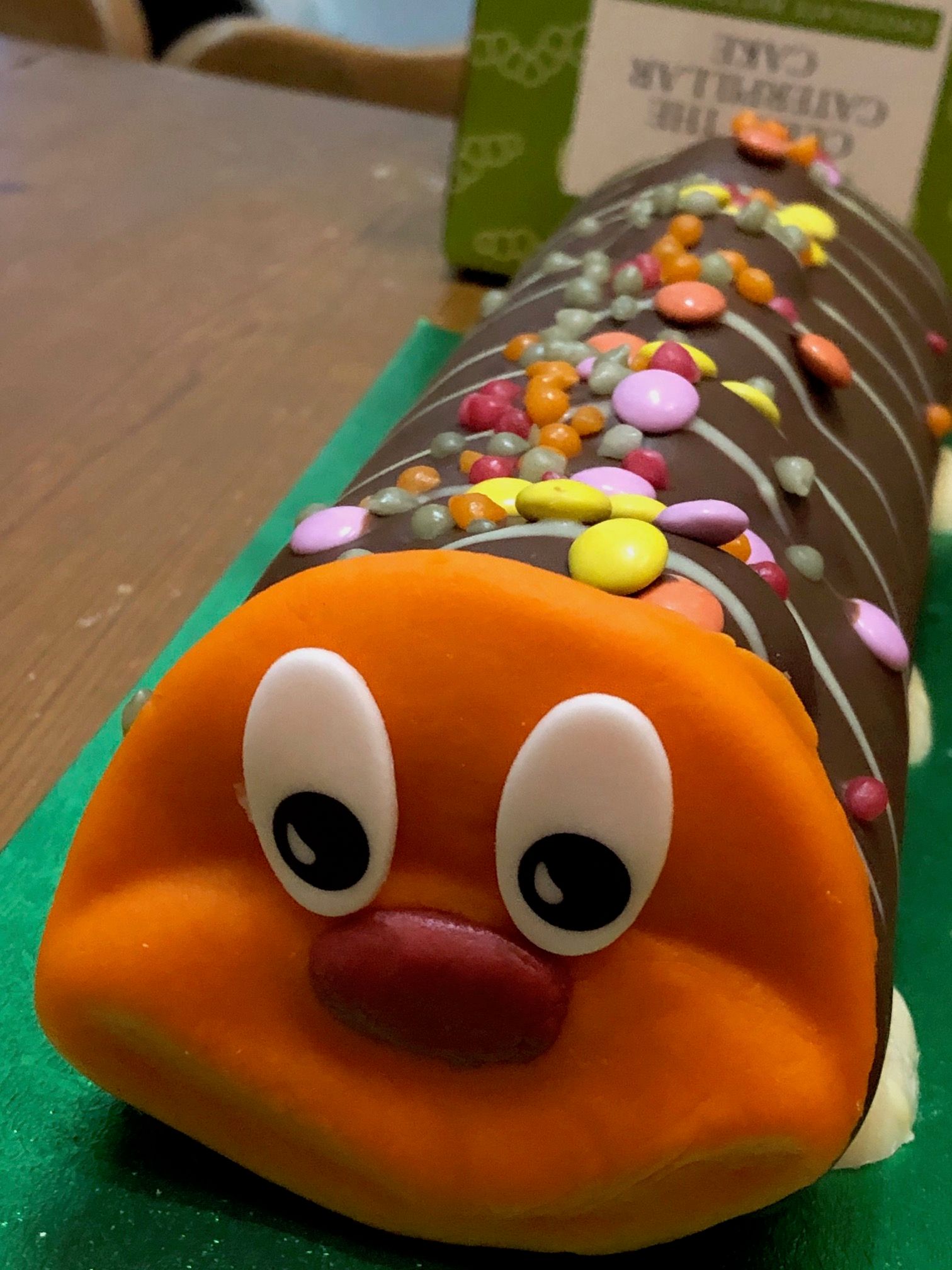 Why does he look like a train? Why is his head twice as big as his body? And why the fuck is he bright orange?

Despite a sufficient quantity of sprinkles and a semi-decent if not slightly one dimensional taste, we just couldn't get past how freaky looking this caterpillar was. This kid had SEEN SOME SHIT and it wasn't until we looked at the box that we worked out what. 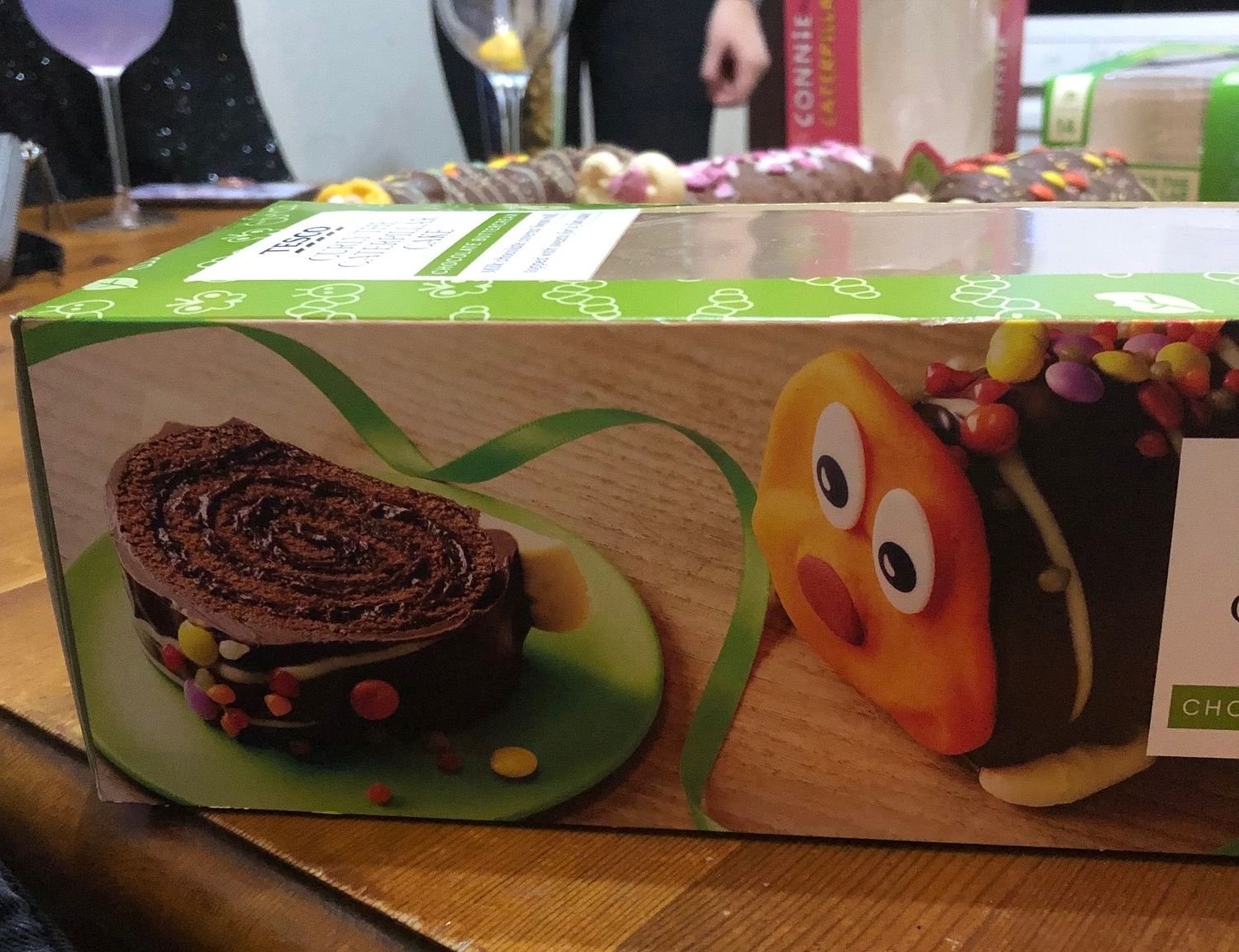 Yes, we would also be absolutely scarred if we had to look at the sliced up innards of our friends on a daily basis. @Tesco, wtf??

If Curly is that drunk kid in the club stuck in an existential crisis of dread and nothingness, Charlie is his fucked up friend. 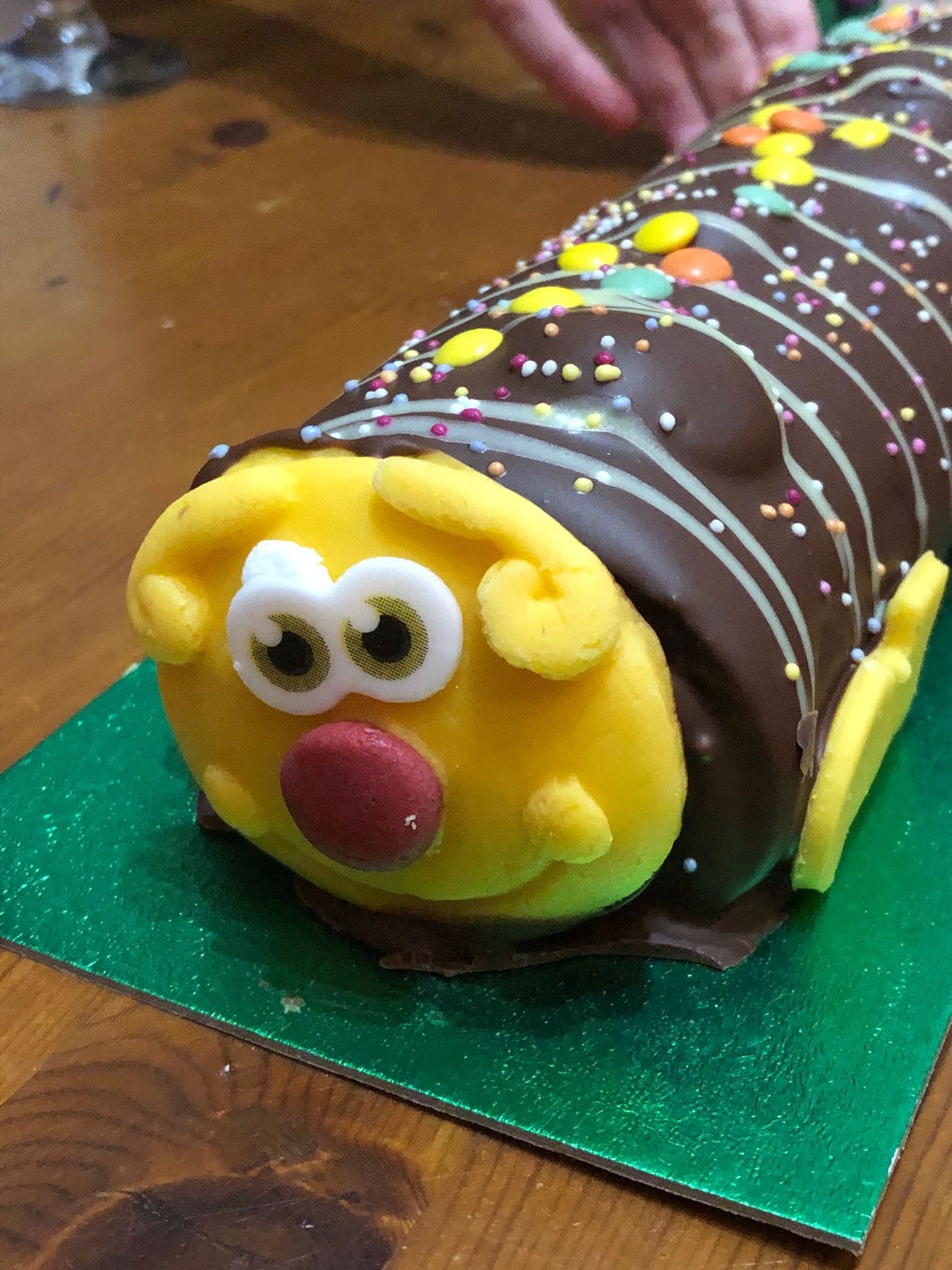 Clearly named after all the coke he's been sniffing, Charlie is absolutely off his nut. He's got that random chaotic energy that coke heads just seem to exude and only someone on THAT wave could decorate a cake with so much eccentricity.

We were surprised we didn't get high ourselves just eating him.

There's a reason more than seven million Colin the Caterpillar cakes have been sold since 1990, it's the best of the bunch. A feminist queen who had clearly got her hands on a Kylie lip kit, Connie was the best house party snack and the ultimate hangover cure.

Want to break stories like this? Join The Tab Leeds now! Get in touch via DM @thetab_leeds on Insta or The Tab Leeds on Facebook.