The Tab’s A to Z of Leeds: an alternative guide

From Akmal’s to Zulfi’s and everything in between

Leeds. Home to the Popina's mega breakfast challenge and the weird and wonderful place that is the Beaver Works' smoking area. Also home to some 60,000 students, perhaps yourself included.

Navigating the niche world of Leeds student culture might appear a daunting task, especially if you're a Fresher to whom the words 'Fruity' and 'Crispy' are simply mere adjectives. That's why we've created this nifty guide, organised alphabetically, to help you survive the mean streets of Leeds.

Welcome to our A to Z of Leeds. 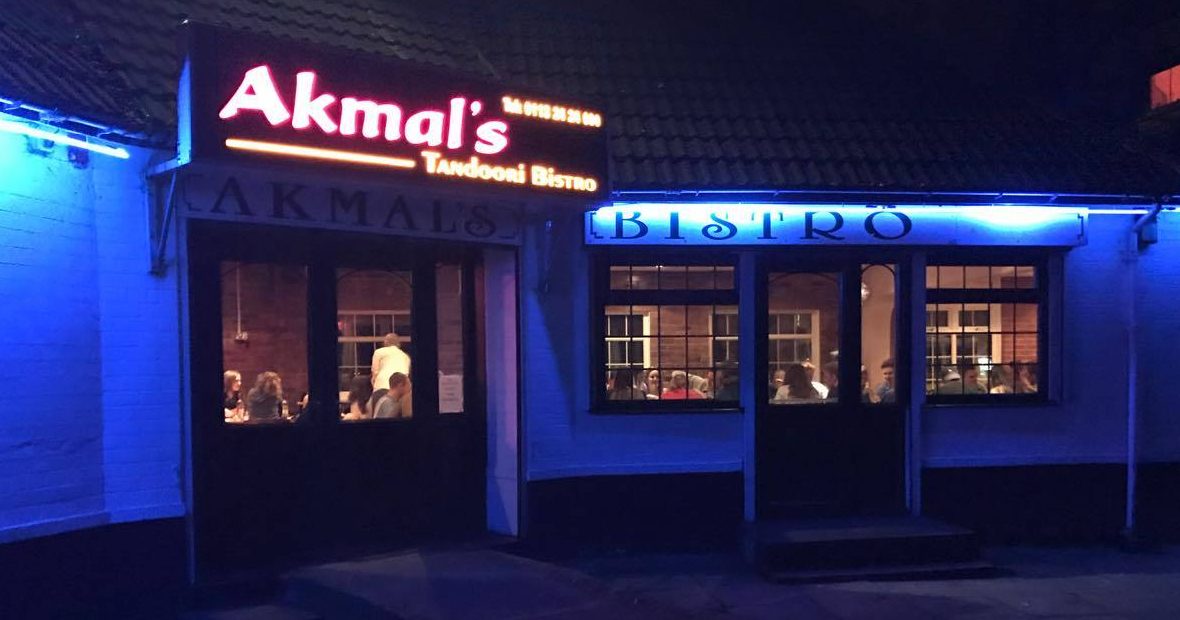 Yeah it basically costs £5 just for a panini and a drink and you'll literally catch anxiety from the stress of trying to order, but you'll tell yourself something like 'the bread is good quality' to excuse it all, whatever that means.

One star hygiene rating? No problem! And everyone has a friend of a friend who found a pube/toenail/bogey on their order once. But do you care? Of course not! It's all part of living in #edgyleeds. 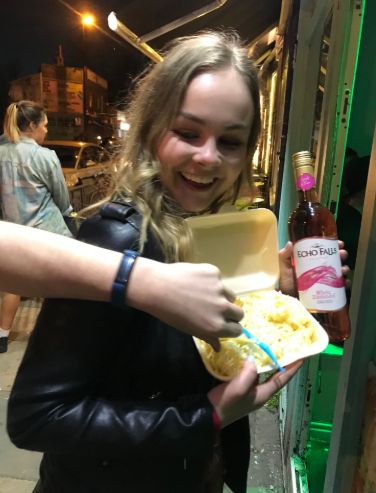 Not a damn soul:

why is this literally everyone in leeds https://t.co/xmuGs0Cgi6

'Mate I love this song have you heard it? It's called Glue, by Bicep. Yeah it's pretty niche haha I have quite an eclectic taste. Man I like everything. From techno to acid house to deep house haha my taste is so varied you know? I hate mainstream music haha. Mate do you know 'Mall Grab'? Yeah he's sick, he's coming to Wire we should so go. We could split a gram. Not that I need drugs 'cos music is my high. Haha. Calm.'

The union night where the ugly people go to get with each other. Literally impossible NOT to pull. Apparently you can't get in if you're above a 7/10. 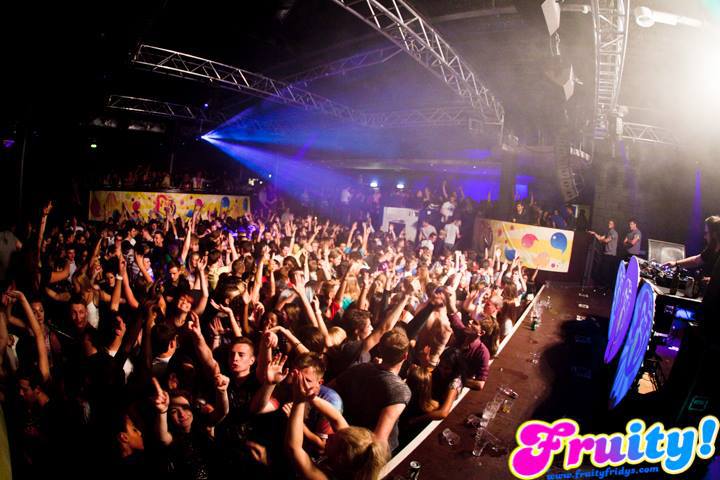 Baby's first 2cb trip. If 'Leeds Festival' wasn't already a thing, Gottwood would have changed its name to 'Leeds Festival' by now, never mind the fact it's nowhere near Leeds. Rumour has it, you actually have to show them a picture of your Leeds student ID to get in, as well as take an oath vowing to not shut up for a good 2-3 months about what a 'sick time' you had.

Home sweet home. Yeah, the bit past RPP is a bit scary at night and the student population is driving up housing prices like there's no tomorrow, but it's home to most of us. (Read: home to anyone wishing to have friends and/or a social life). 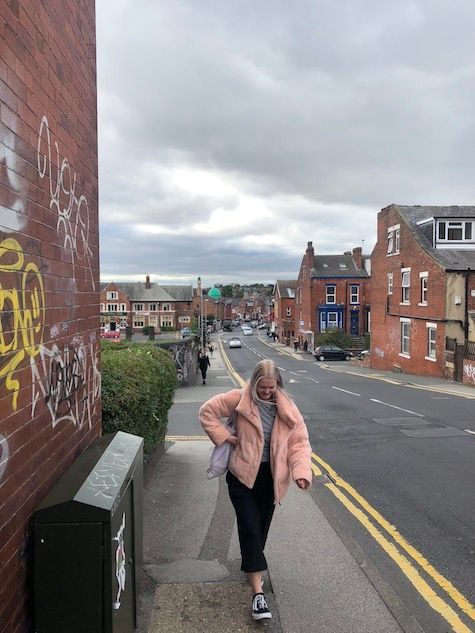 What's the point of going to Leeds if you can't broadcast to your 600 ambivalent acquaintances what a bless time you're having? Bonus points for: scanned disposable photos, use of HUJI, badly-edited red-eye corrector.

having a nice time with my friends

You sit in the smoking area of RPP feeling superior to all of your friends still faffing about with rollies. You truly feel as though you are living in 3019 as you engulf everyone in another noxious cloud of cherry-scented fumes. Through the smoke you can't see that everyone is actually laughing at you and rightly so.

Almost definitely cut with speed and god-knows-what, Ket is a Leeds' student's staple diet. God, I must look so cool, you think, as you take your third key of the night, hoping as many people are looking at you as possible. You then stagger outside to vomit and fall over into a group of intimidating third-years. Cool as ice.

Just like Gottwood should be renamed 'Leeds Festival', Leeds should be renamed 'London'. Not that the city or the culture really has anything in common with The Big Smoke, but it seems 99% of students come from there. Or, more likely, come from Surrey or Hertfordshire, which according to them is still London. Calm.

Because apparently it's 1984 again. We do admire the confidence of Leeds' mullet-wearers though, so we can't take the piss too much.

Usually requested as a Christmas present come the end of first term in a desperate attempt to assimilate. Because who doesn't want to look like everybody else? But well-worn by the time term resumes in January because they're not cool unless they're slightly battered and old-looking, obvs. It's normal for females to pair them with those Topshop ribbed black flares, as seen on the Flaremax Instagram page.

Has anyone actually finished the whole thing? And does anyone actually enjoy them? Who knows, but everyone must at least attempt to make the pilgrimage from Woodies to Dry Dock wearing an overpriced Luigi costume at least once during their time at Leeds. 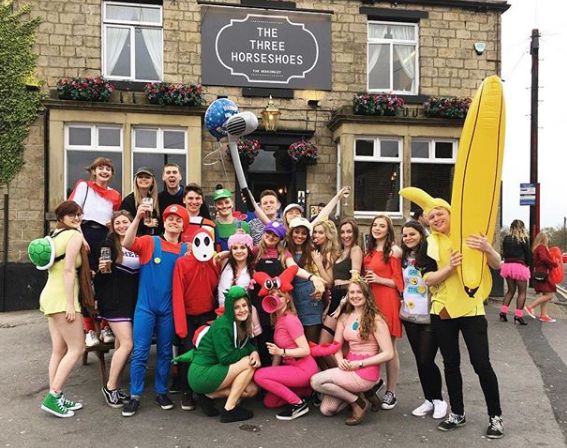 It's Day 1 of Leeds uni. Your name is Talullah Ponsonby-Wellington-Labrador. You move into your flat in Charles Morris – what, Daddy couldn't actually expect you to share a bathroom with randoms, could he? You meet your flatmates. There's Kitty, another Talullah, Maxmillius, and Quentin (who is actually minor royalty). The three of you went to Stowe. You call Mummy to let her know your new friends seem 'your type of people', which means they too paid £30k+ a year for their education. Daddy paid your rent upfront so all your loan is about to be blown on badly-cut drugs and Waitrose deliveries. Life is good. 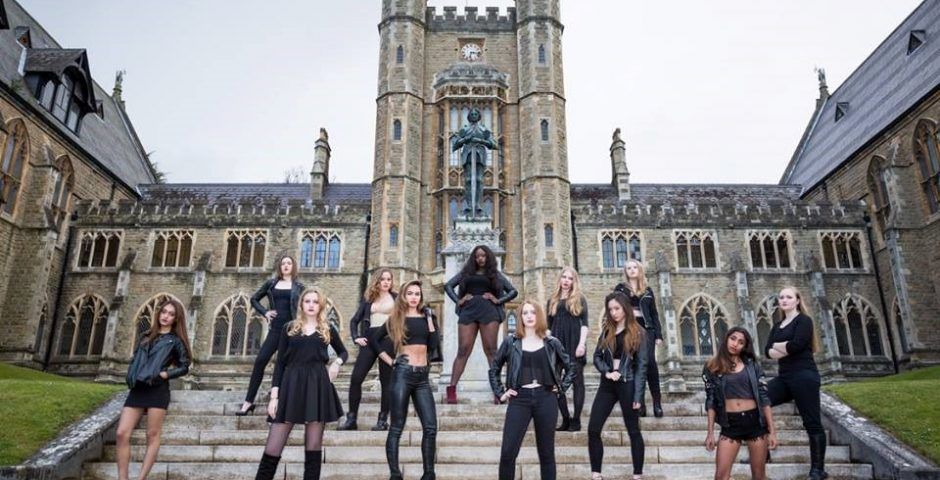 Home to Pitza Cano and Chopsticks, AKA the finest takeaways in Leeds. Expect to order bi-weekly from these two institutions once your MDMA habit has rinsed you out of serotonin and you find yourself depressed and physically unable to cook or even eat a vegetable.

Whether the Brudenell or Royal Park Saino's is your regular, we think every Leeds student can safely say Saino's has been a rock through it all. Failing uni? Go to Saino's. Girlfriend dumped you? Go to Saino's. Developing an alcohol problem? Go to Saino's. It's okay. Saino's will always have your back. 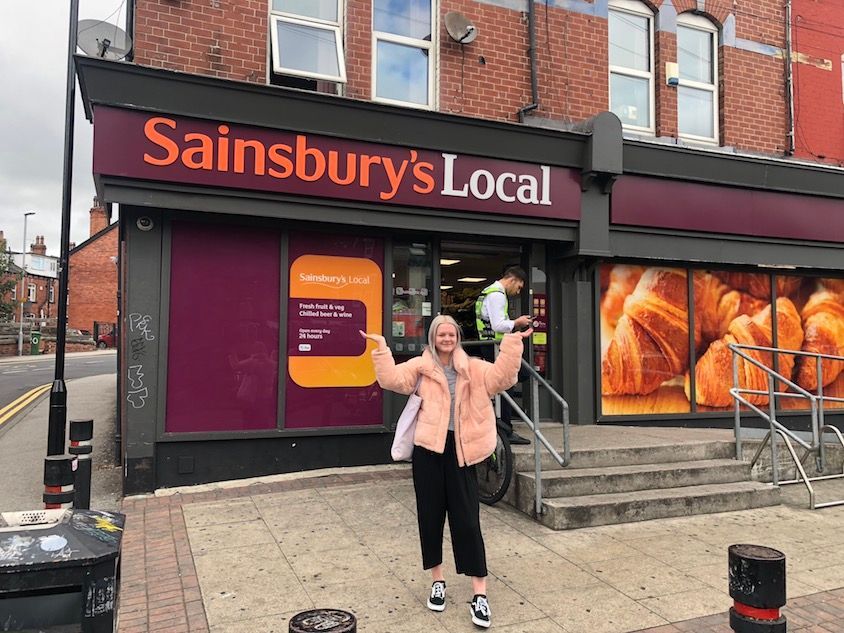 The little graffiti tag all over Leeds and Hyde Park which never fails to raise a smile. Extra points if you have a tattoo of the symbolic two faces. 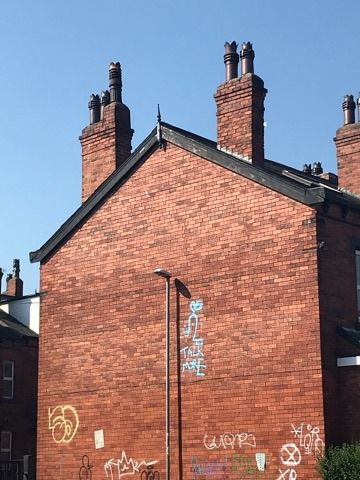 AKA the Leeds University Uniform shop. Yeah, that FILA sweatshirt probably cost £3 to make, but now that it's down to £50, you physically can't say no. Also home to the infamous Leeds 'green puffa'. 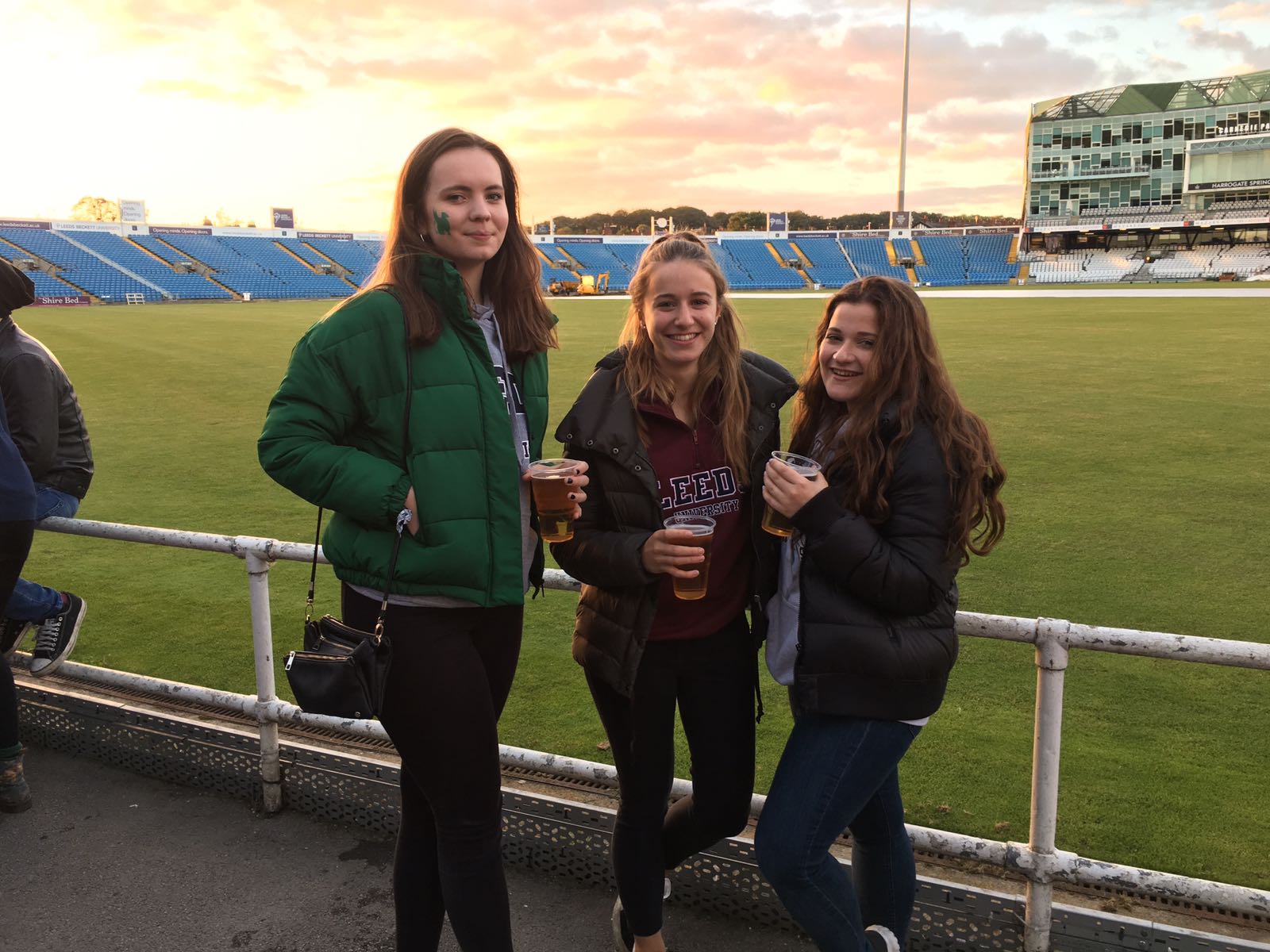 We actually can't make fun of vegans because to be honest, we wish we were as dedicated and determined as them. Fair play for doing your bit for the environment. Pass us the cheese.

As soon as the temperature exceeds 20 degrees, expect to see men, women, and man-children alike descending on Woodhouse Moor (and calling it Hyde Park in their Instagram posts). One Stop and Saino's are sadly never quite prepared for the 200% increase in Dark Fruits sales. 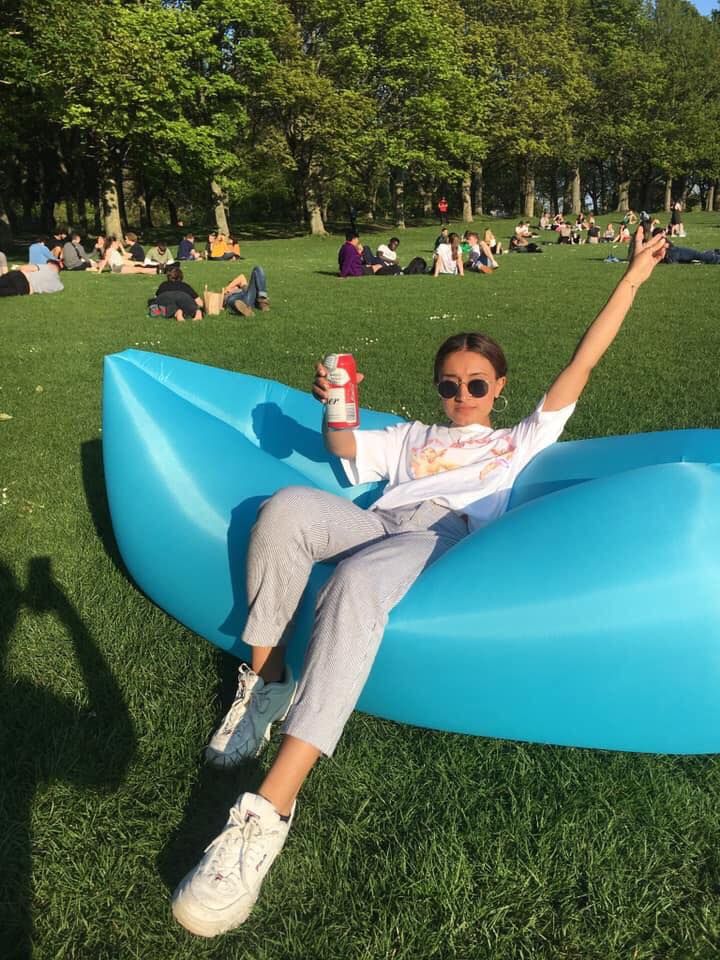 The natural progression from ketamine. They grow up so fast.

'Yeah so this one time on my year abroad.' Basically the third-year student's equivalent to a first-year's 'gap yah'.

Painfully under-appreciated, Zulfi's is a culinary wonderland located on Brudenell Road. This fine establishment also boasts a one-star food hygiene rating, but its chips are 100% worth the relatively high risk of food poisoning. Bon appetit! 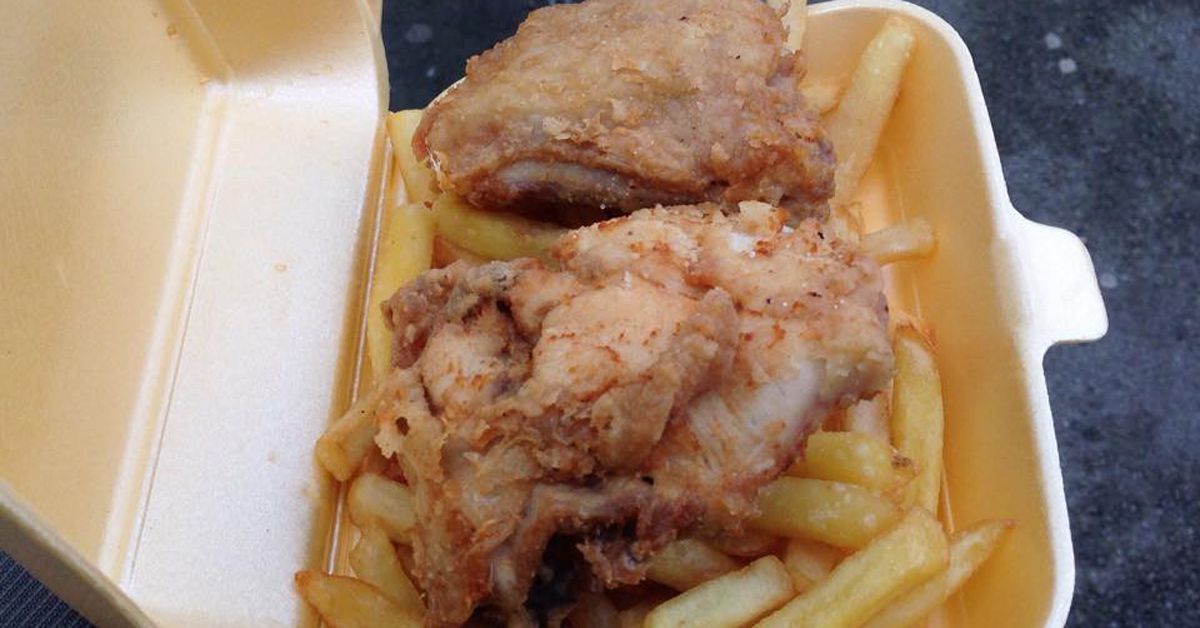