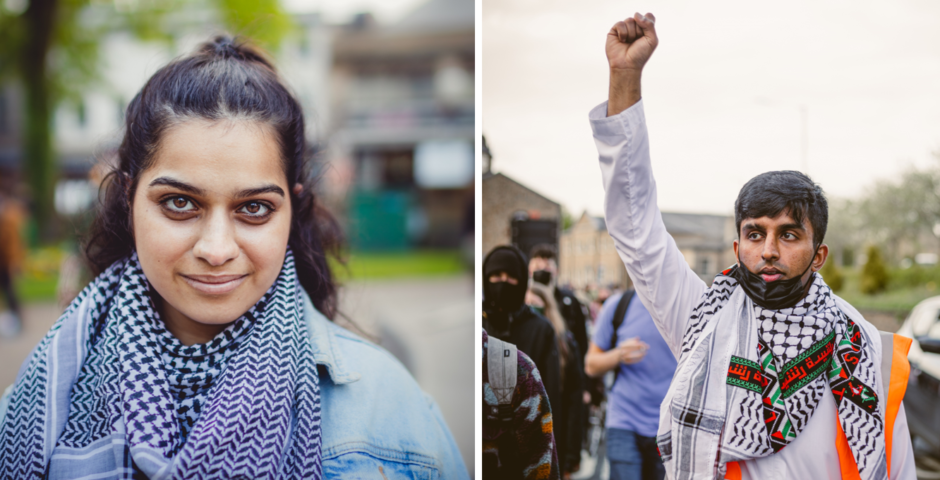 ‘I am proud to stand with my Palestinian brothers and sisters’

The Friends of Palestine society and supporting students gathered on Alexander Square with leaflets and a loudspeaker to protest the ongoing Israel-Palestine crisis, last Friday.

After several speakers delivered unscripted remarks about the dire situation faced by Palestinians who have been left defenseless to airstrikes, lynch mobs, security raids and illegal home seizures, they implored those gathered to listen to use their voice on social media to amplify the calls for peace and justice.

The group then moved to Edward Roberts Court where they flew their banner to support from the Sultans of Lancaster staff. 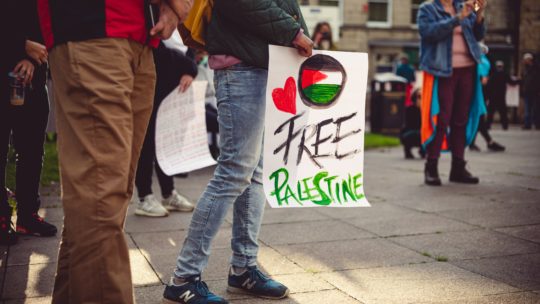 ‘Being a Palestinian student is hard in Lancaster’ 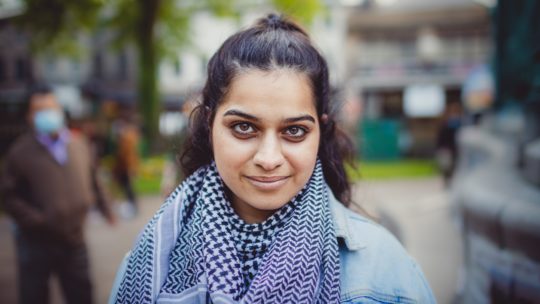 Yasmin, aged 21 from Bowland college, has been a member of the Friends of Palestine society since she first joined Lancaster University. She said: “Being a Palestinian student is hard in Lancaster and over the past three years, I have experienced difficulties with students and LUSU because of my support for Palestine.”

On the matter of the university allegedly financially contributing toward the Israeli-Palestinian apartheid, she said: “It’s important we know where our money is going. According to the Palestine solidarity campaign and Freedom of Information requests, over £60,000 is going to companies that provide weapons to Israel used to commit inhumane acts towards my people. We all want peace in the region, however, peace will not come without justice for us Palestinians. Free Palestine!” 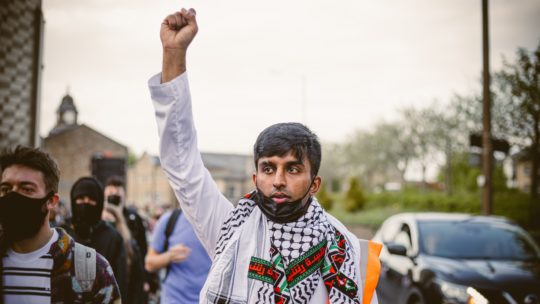 Haddi, aged 22 and a politics student from Fylde, is another leading activist on campus, who has been victim to sustained and targeted harassment in the past for his outspoken condemnation of the actions of Israel against Palestinians.

He said: “I’ve campaigned for Palestinian human rights ever since I was a teenager. I am proud to stand with my Palestinian brothers and sisters.”

He implored university students to mobilise, protest and demand a policy of Boycott, Divestment and Sanctions be employed toward Israel in the same fashion as used successfully toward South Africa in the 1990s.

‘One two three four, we don’t want your bloody war’

After the campus display, the protestors went into town to join the far larger gathering at Dalton Square. More speakers participated in shows of solidarity, draped in the colours of the Palestinian flag. Chants rang out across the plaza: “One two three four, we don’t want your bloody war; five six seven eight, stop the killing stop the hate” and “From the river to the sea, Palestine will be free”. 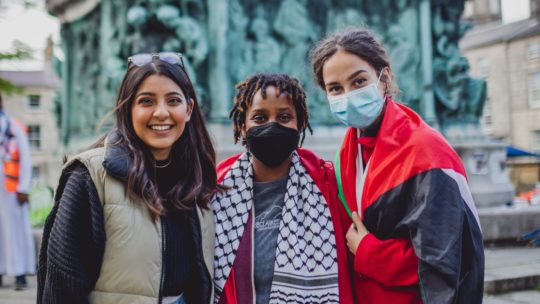 Wacera, aged 21, approached the issue from a place of empathy. Wacera said: “The Palestinian struggle is one against imperialism and western colonisation. As a Kenyan coming from a previously colonised country it is only natural for me and other free people to raise a voice for those going through the same pain that we went through 60 years ago.

“The liberation of Palestine is linked to our global struggle to decolonise our lands and end imperialism in all its shapes and forms. Free Palestine!” 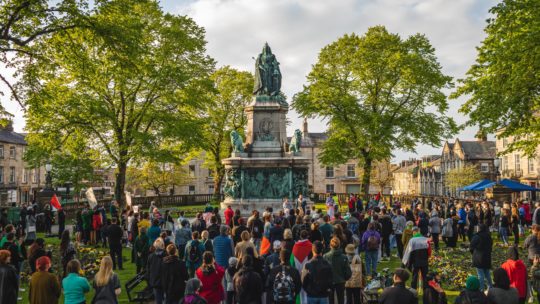 The leaders of the protest attended a huge rally in Manchester the next day which they live-streamed in support of the Palestinian cause. Over the weekend, the South African government has spoken up about the issue, strongly condemning “the unjust attacks by Israel on Palestinian civilians” and has called for an international investigation, demonstrating again the effectiveness of such protests and boycotts in the past.

“As an outward-looking, global university we have been involved with Palestinian universities for more than a decade – these links include an exchange programme, a formal Memorandum of Agreement (with An-Najah University), scholarships and other collaborations designed to strengthen links across research, teaching and broader engagement.

“We stand in full support of any student or group experiencing harassment. Lancaster University does not and will not tolerate hate, prejudice or abuse particularly where an individual or group is being targeted for their ethnicity, faith or views. Hate and intimidation have no place in our University and we will not hesitate to act where our processes find this to be the case.

“We also stand for free speech, openness and dialogue and will support any student that wishes to express their views providing they are not a direct malicious attack on another individual or contributing to a climate of hate.”

For more information about the ongoing crisis in Palestine, click here.