If you thought the hustings damaged your brain, wait until you see what this does to your liver

Sitting through the hustings is akin to drinking a bucket of paint; you know it has to end at some point, but my God is it a painful evening of having to swallow some unimpeachably dire drivel that you know full well is only going to harm your brain in the long run along with an excruciating bowel movement or ten which is were this analogy starts to break down somewhat.

Long and short of it, the hustings are to the human brain what Maroon 5 are to quality control. If you attend, you’d best settle in for a delightful evening of thinly veiled grandstanding and speeches so moral that they’re bordering on saccahrine.

Instead of a boring piece reciting every little thing that was said at the hustings, why not have a bit of fun by using every cliche used at the hustings as a guide to get thoroughly spangled?

So sit back, get the livestream up (even though the video died after like 10 mins, the audio is still there), and allow us to make the hustings no longer a waste of time, but merely a waste of sober time.

How to eradicate your liver in one night

Since we don’t want to be held accountable for rendering anyone paralytic, or causing anyone to awake bleary eyed completely naked on a ferry to Iceland, buzzwords such as Sugarhouse don’t have to be a full shot, otherwise this would make the Purge look like Winnie the Pooh.

With that out of the way, here are the rules.

Drink a thimble of alcohol every time someone says:

Take a full shot every time:

1) The livestream cocks up. Double shot if this is accompanied by nervous laughter.

2) A candidate mentions their JCR experience twice in under 30 seconds.

3) A candidate shits on LUSU. Triple shot if this is in conjunction with a thinly veiled reference to Canton Court.

4) A candidate blames the culture of Lancaster uni for their inability to do their job.

5) Jack O’Dwyer Henry says “conscience”, “principles” or “right” in his speech explaining why he no-showed.

6) Someone in the audience knocks over their drink. Double up if their phone goes off.

7) A candidate says they’ll improve communication between the students and uni management, without actually saying how they’ll do it. Double if this is accompanied by “real student change.”

8) A candidate doesn’t directly answer a question. Quad shot if they lead with “Like [insert name] has said” as a cover for the fact they have no idea what they are talking about.

9) A candidate for Sports talks about how ‘inclusive’ sports at Lancaster are.

10) Someone brings up the oversubscribed number of students without saying how they’ll tackle it.

11) There is a clear but unstated reference to dodgy trustees.

12) Student media gets a mention.

13) George Nutall says the reason for the Student Unions tumble through the league table is not his fault, it’s because the SU doesn’t have its own building.

14) Geroge Nutall laments what a shame it is that no-one is running against him. 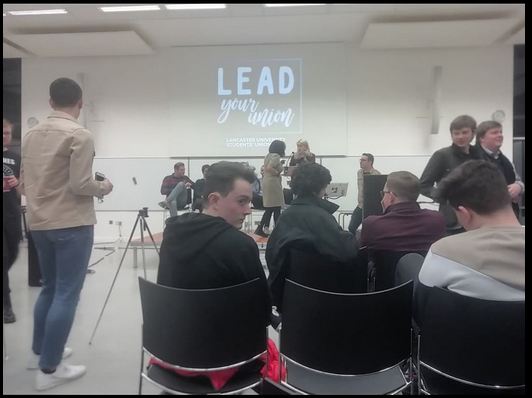 Destroy your liver? Completed it mate

And with that, the hustings are at last bearable. This is not to say that student politics are unimportant, just merely that it it is so heavily based on unachievable promises, tacky soundbites and mind-numbing repetition of the latter complaints that one has to be either a saint or drunk to engage with it. As we are not Saints, getting drunk is our sole recourse.

Remember, drink with a spotter, or at the very least with a friend who isn’t as drunk as you. They’ll have to sit through the hustings semi-sober though, so you might be down one friend by the time you see them next.