A County college first year has been living with a leaking ceiling for half a month without any progress to its being fixed. In a city where the average rainfall level is 25 per cent more than the national average, spending winter below a roof collecting water has been a damp one for this fresher who wanted to remain anonymous.

The student told The Lancaster Tab: “I came back after a night out and fell asleep in bed. I woke up half an hour later to drips on my bed. It was coming from my ceiling which has been leaking every night it rains for half a month. I just rolled over and fell back asleep.” 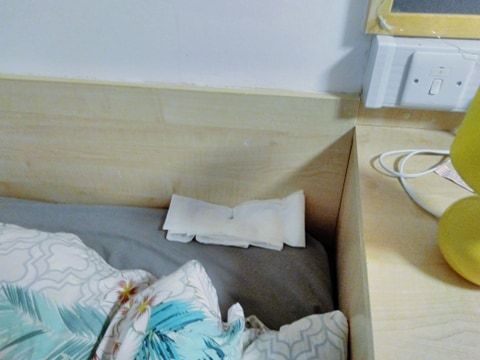 “It drips there, where the tissues are.”

“It was damp before but it’s got so bad this term because now it drips when it rains. They’ve been trying to fix it for ages and come in at least a couple times a week to look at it; they ask me if it’s still leaking, I say yes, and they leave again. 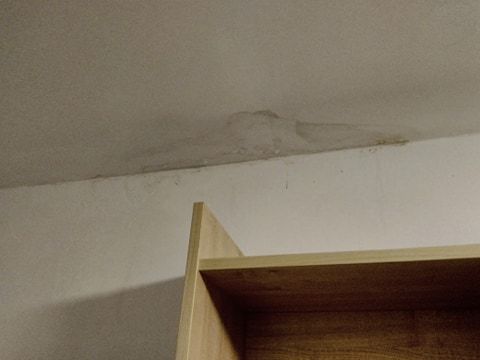 Two weeks after a repaint

“They scraped the mould off my wall and repainted the ceiling two weeks ago but it didn’t fix the problem and it started dripping again. After that, they called in the company who originally built County Main because there’s a structural problem with the waterproofing – they think it’s collapsed.”

The same structural issue with the waterproofing has happened in the stairwell outside the flat’s front door. “There’s a constant drip from the ceiling above the stairs when it rains. Someone occasionally puts a bucket under it but it’s usually the students who live in either flat outside of it. I’ve never seen anyone from maintenance come to look at it but it’s been reported multiple times,” said a second anonymous student living in County Main. 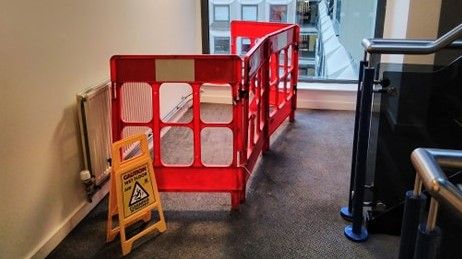 ‘We let the porters know when it drips – which is every time it rains.’

“Two weeks ago,” continues the first year living in a room that drips on her bed, “it was taking so long to fix that they offered me some amazon vouchers to make up for it. I’m not sure who I’ve been talking to but when the college staff came around to carry out room inspection, I had to explain why everything was in my wardrobe to protect it from damp, because they had no idea.”

But it’s not just drips causing students stress in County, there’s pretty severe black mould and damp problems too. In the same flat, another student was on steroids for her asthma during the first month of Michaelmas term. “I was prescribed them twice because of the state of my room. There was black mould around the window (which is still there), the window is dodgy closing, and the heating goes off in the middle of the night – all things that are known for making asthma worse.

“I struggled sleeping, woke up too breathless to attend lectures, and the cold air sent me into coughing fits or asthma attacks so that I couldn’t leave my own flat. The doctor prescribed me multiple inhalers and steroids on two separate occasions and personally advised me to buy a personal heater (despite the accommodation rules) because our heating is switched off at 11PM. 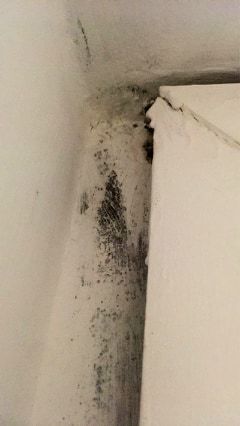 “I tried to scrape it off myself when nobody came to fix it.”

“I didn’t socialise because I couldn’t go anywhere and missed so many lectures that I’m still feeling the impact now. It aggravated my asthma and mental health problems so much that, when my academic advisor offered the option of restarting next year, I seriously considered it. I felt uncomfortable even talking to my college about it because there was (and is) mould a lot worse than mine in most rooms that have been reported and never sorted. One of my flatmates had to buy a dehumidifier to reduce the spread of mould across her walls; I knew that if they wouldn’t remove hers, they wouldn’t remove mine, and they wouldn’t even consider the heating.

“Heating is a huge issue because there are draughts everywhere, few of the windows properly close, and the heating is automatically switched off at 11PM for “environmental reasons”. But we’re 18, 19, and 20 in this flat – we’re old enough and environmentally conscious enough to switch off the heating ourselves. If the heating stayed on all night, maybe I wouldn’t still be taking two inhalers and waking up breathless in the morning and maybe there wouldn’t be black mould in every room.

“It’s inexcusable that the mould was not removed before we moved in. It’s an absolute joke. There are silver fish in the bathroom, black mould and damp crawling up the walls, drips coming from the ceiling, and during our room inspections, they had the nerve to complain about boxes behind the door.” 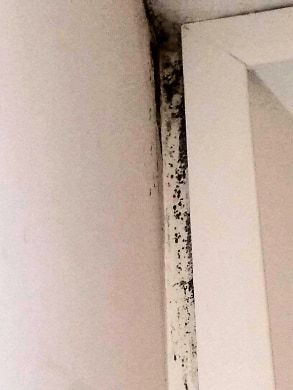 “People who came into my room thought it was just a massive black shadow.”

When contacted, the university had this to say: “Unfortunately, due to the extreme weather conditions we have experienced water ingress issues in the County Main building. Our maintenance team have responded appropriately and are working to resolve the problem. We cannot comment on any individual cases but the health and well-being of our students is our main priority. During events like this Accommodation staff will be in contact with students to check on welfare and where appropriate alternative offers of accommodation would be made. We would encourage any student to contact their Accommodation Manager if they have any concerns at all about their own health and well-being as well as that of others.”

The maintenance team working to resolve the problem explained, “We’ve had three guys in to inspect the roof but it’s not obvious where the damage is because of the way the roof has been built; water could be getting in, past the waterproofing, and, because the roof is flat, could run all the way from somewhere else to where it eventually drips. We’ll be putting an inspection hatch in the ceiling [above the stairs] to investigate where the leak is coming from but this could be a very long process. It’s because of the historical building we’ve been left with, the way it’s been built, that this happening.”

The law states that tenants have the right to “live in a property that’s safe and in a good state of repair”. The anonymous student has not been told how much the vouchers will be amount to and has not been offered any part of their rent back in reparation.