Following the turn of events that saw students at Lancaster Uni vote overwhelmingly in favour of halting the sale of the Sugarhouse, the Students' Union have announced they are abandoning talks to sell the nightclub.

The referedum on the sale of the Sugarhouse took place in week eight of Michaelmas term, turnout was at 26% of the students, with 93.8 percent of students voting in favour of abandoning sale talks: 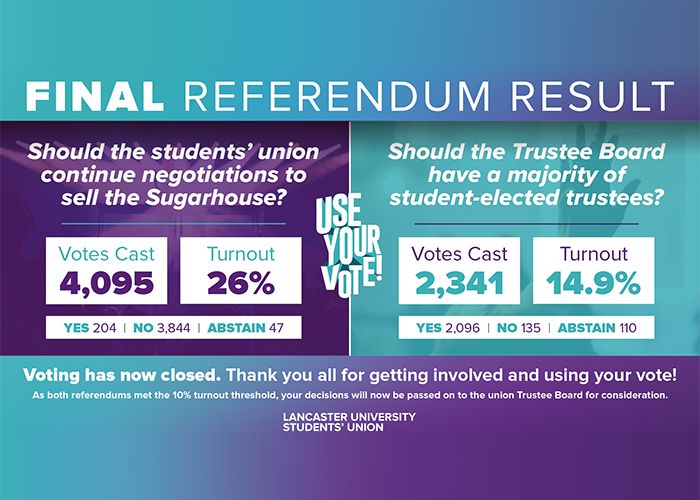 In a statement released by Lancaster University Students' Union, they say: "Our board met this week and agreed to uphold the result of the referendum, meaning that the Sugarhouse is no longer for sale."

George Nuttall, LUSU President said: "It's no secret that the Full-Time Officers opposed the sale of the venue and I'd like to thank everyone who signed the petition, took part in our AGM, and voted in the referendum.

"You showed the strength of opposition to this proposal and made your voice heard, thank you."

The Union's statement concludes with the acknowledgement that the union is looking into the future of the club: "The union will explore what is required to secure the long-term future of the business."

There will be a celebration event taking place in Sugar on Friday 13th December.