Is this LUSU presidential candidate taking the piss?

It’s LUSU Full-Time Officer election season. The candidates are campaigning hard, draping their banners over the Furness balcony and harassing people foolishly walking across Alex Square without headphones in. LUSU’s recent Democratic Review survey revealed that 70 per cent of you know about the FTO positions (although only nine per cent know what all of them do), and they’re pretty hard to escape from, this time of the year.

One of the roles up for grabs is the LUSU President and four people are currently running for the position.

One of them is Adam Gardner, and he might be taking the piss. 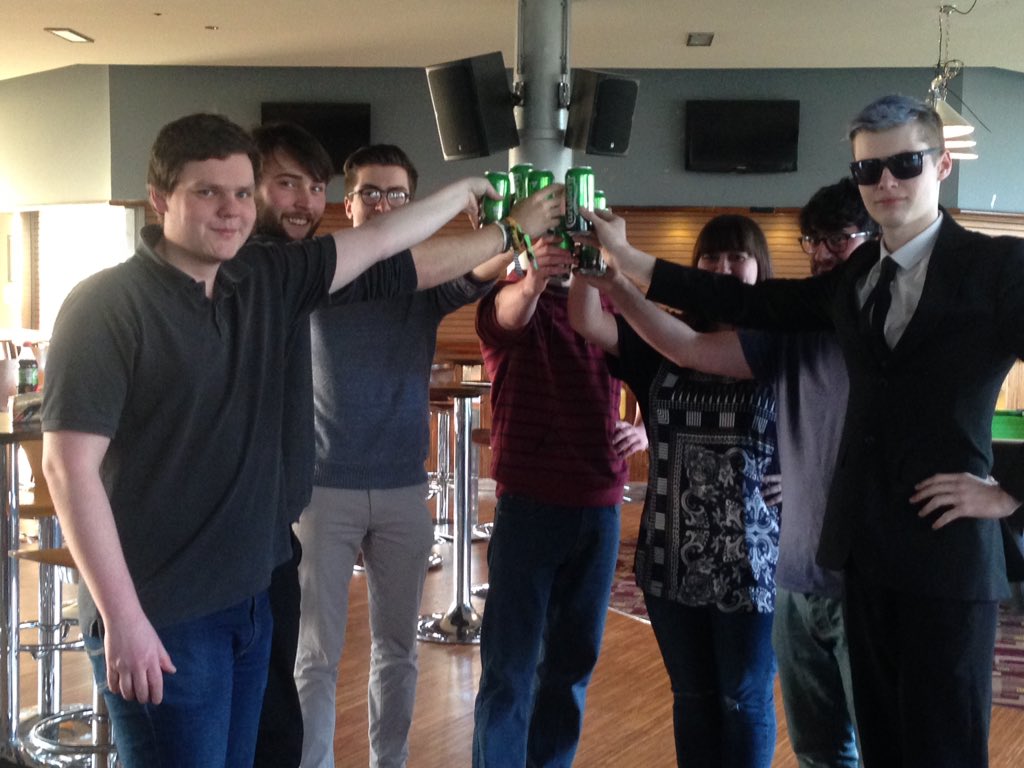 Of course they had a post-hustings afterparty

His manifesto starts with a misphrasing  of the French Revolution motto of “Liberté, égalité, fraternité”, which rather sets the tone. The rest of the manifesto reads quite sensibly though, with Gardner pledging to create “a fairer, more representative and clear cut LUSU” along with a wish to “tackle the issue of the lack of cheap healthy food on campus” to “improve our sporting performance”.

But then there’s his Facebook campaign page “Please vote A-DAM Gardner #1 thank you“. And his poster: 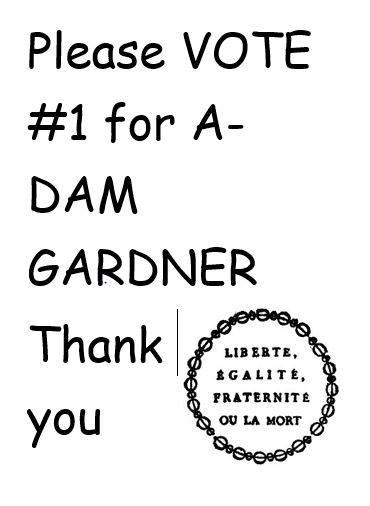 A work of art

The Comic Sans. The still visible cursor. The hyphenated, linebroken name. The quiet desperation. It’s beautiful. But are his policies as much of a pisstake as his marketing?

“Cheaper healthy foods” and “Improving the sports centre” seem legit, but interspersed throughout are policies like “Free sanitary products, such as Tampons, condoms and miniature soap and shampoo” and “More books in the library“, with no mention of what the latter would consist of. Perhaps a suggestion as to Gardner’s motive comes from manifesto points “Focus more on issues for Lancaster Campus, not worldwide politics like Israel/Palestine” and “Monthly publishing of FTO spending“.

LUSU gets a lot of shtick (both deservedly and undeservedly) for their perceived reputation as do-gooders and moral crusaders, as well as for their occasional frivolities. Is Gardner’s campaign an attempt to reach out to those student who are perhaps disengaged with the union? Is he using satire to make serious points in an attempt to change things? Or is he just a twat who wants “Slow and fast lanes on the spine” and “Better DJs in Sugarhouse” (don’t we all)? I spoke to him and his campaign team to find out. 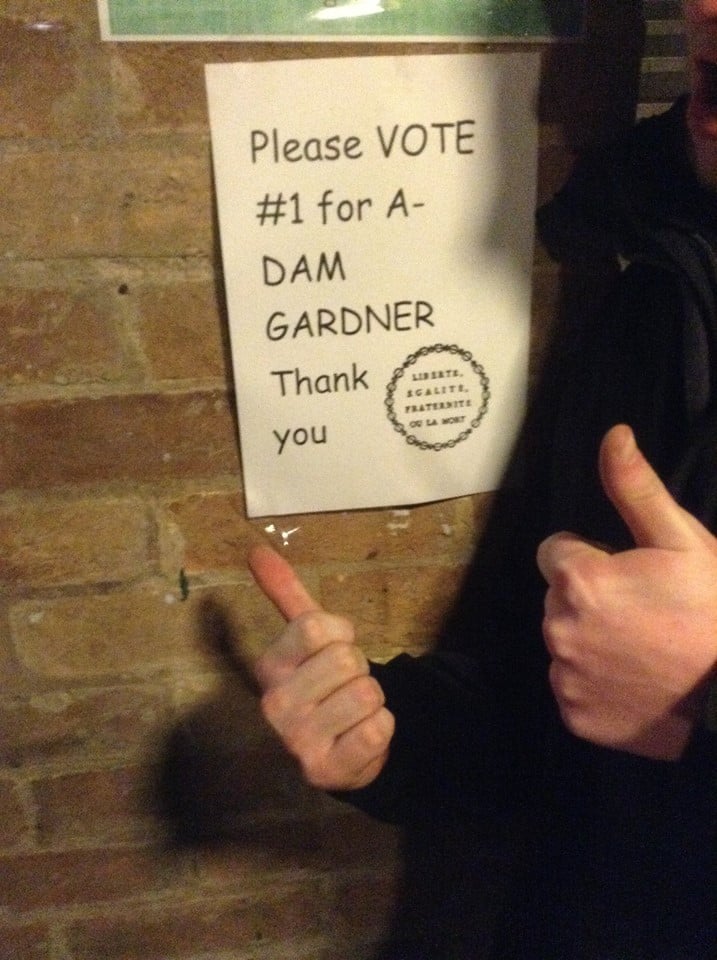 Gardner on the campaign trail

Are you taking the piss or is there more to it?

Adam Gardner: We’re serious, we just happen to have a funny campaign.

Cian Jarvis: Humour is the best way to reach the people.

AG: Yeah, we’re trying to reach all the people who have stopped caring about LUSU because of their silliness.

Why’d you decide to run?

AG: I was on a bar crawl. Chris said he’d put his name down, so I did too. Then I actually did. 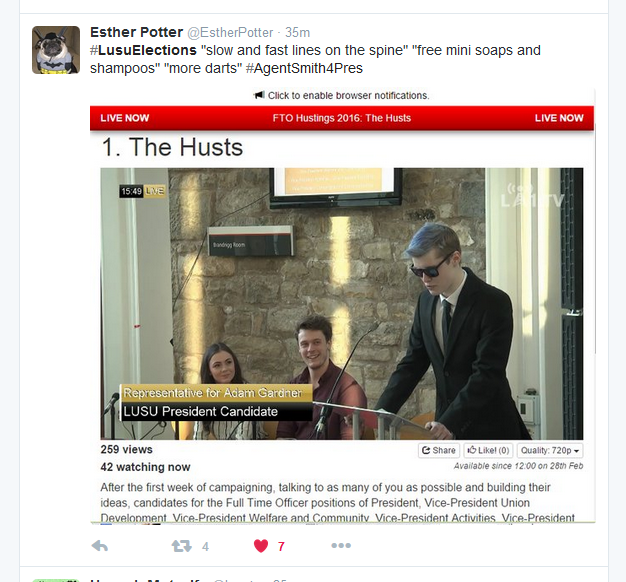 This happened, and it was wonderful

Say you can only get one more book in the library. What book do you choose?

You have a policy of free sanitary products for all, including mini hotel soaps and shampoos. What fragrance will they be if you win?

AG: Mint because it’s generic, like me. A fragrance of the people.

Who is your favourite President?

AG: Emperor Palpatine had some important manifesto points, but if it has to be a President— I don’t know his name, but there’s a US President who someone tried to assassinate, but the gun misfired. The President then started beating the would-be assassin with his walking cane.

Chris Conn: That was Teddy Roosevelt.

It’s pretty obvious that you’ll have to sack one of the FTOs to pay for all those mini hotel soaps. Which position gets the chop?

AG: I think the most useless role is President, and my first act will be to abolish my own position.

CC: The correct answer was Welfare.

AG: Oh you can’t say that, the uproar.

CC: But do you need Welfare when you have miniature soaps?

CC: We should make “bomb Cartmel and return Barker House Farm to its original glory as an actual farm” an official policy.

AG: My campaign can be summed up thusly: it’s time to get our head out of the clouds and our feet back into the soil.

Gardner couldn’t make it to the FTO hustings this Sunday, so had his campaign team read out a manifesto. The entire beautiful disaster can be viewed here (3:42:00), but highlights include a 13-point 5-point manifesto, and his representative standing up and walking out as soon as the first question is asked. How did people react?

LUSU VP (Campaigns and Communications) Katie Capstick had the unenviable task of summarising the debacle in a sensible, balanced manner. She acquitted herself admirably. 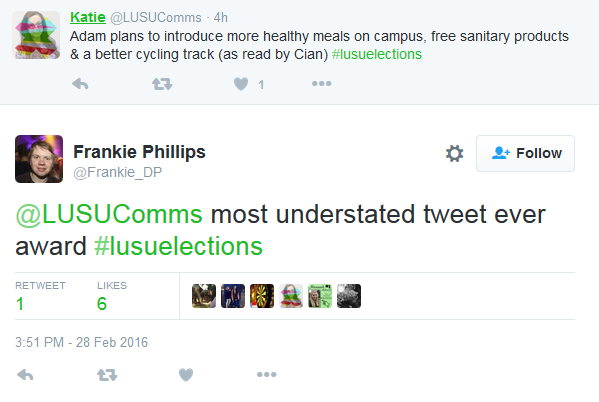 He’s got my vote.