Whether you’re in the mood for feminist perspectives or breaking down medical stigma, King’s students have it covered

Despite the pandemic, lockdowns, and general governmental rules which prevent us from leaving the house- some motivated personalities are still getting involved in activism.

This year in particular, the world has seen important campaigns and protests for change. The protests against police brutality in the name of George Floyd which began in America sparked global protests demanding long-overdue racial justice. Inequalities are being addressed everywhere, and social media is no exception.

King’s students have long held a reputation for being the first in line to chain themselves to a parliament fence, and now they’ve taken that energy to Instagram: 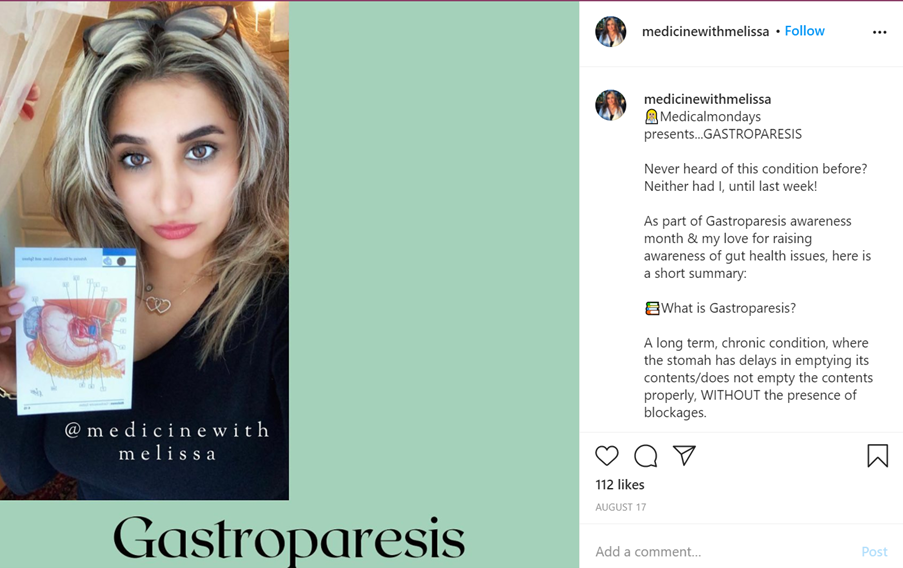 Melissa Torkizadeh is a medical student with big ambitions, creating her page during the lockdown to document her journey studying through university. However as her following grew, the page quickly evolved to provide education on common medical complaints and support those living with complex conditions.

Speaking to The Tab, Melissa says “I’ve always been aware of stigmas associated with health conditions and talking about gut health in particular. As I embark on my journey I hope to show that by talking openly and raising awareness, this is the first step to breaking barriers that exist!”

Many students have struggled with their mental health during the lockdown, and Melissa said “I think normalising conversations around mental health and the interaction with physical health is essential. It’s important to show that life has peaks and troughs. On social media, people tend to post only the good things however I am keen to show that both sides exist and you are not alone in feeling low or anxious sometimes!”

Speaking to us about the content she creates that documents her medical school journey: “I tend to get the comment “you don’t look like the type to study medicine” and this is something I wanted to address as my page grows. There are different types of students out there and it’s important for us to have a realistic view.” 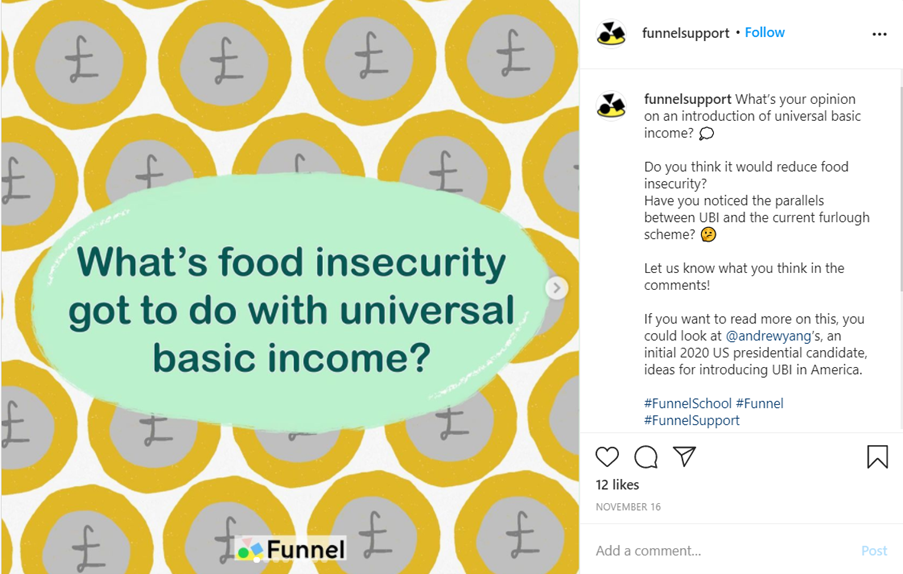 Funnel Support Network is your go-to page to learn about food insecurity and how to help, in Southwark and the wider London scene. Funnel is also a charitable organisation which donates to local food aid projects – greatly in demand following the national lockdown.

Speaking to The Tab, one of the founders Karim Ali explained: “After working with donations for a few months we realized the social challenges underpinning food insecurity were a lot deeper than simply helping food projects run for another week. With this in mind, we started using our platform to share advocacy information to try and tackle the underlying social and economic factors that contribute to food insecurity.”

“Food insecurity and the poverty trap are very relevant to the King’s catchment area in Southwark where there are great degrees of income disparity and low availability of public housing.” Speaking on the scope of the issue, Karim added: “Food insecurity is a symptom of many larger social and economic challenges within our modern society.”

Explaining their long-term plans, Funnel Support Network aims to engage its youthful support: “The biggest challenge today is connecting the generations that will be impacted by today’s decisions and the generations which remain the decision-makers today. Our long term plan with Funnel is to pivot towards Funnel for schools, an educational program that teaches school and college students about the importance of grassroots community work and advocacy through the topics of food insecurity and climate change.

I’m hoping to empower the next generation of change-makers.”

Their Instagram page serves to draw attention to food poverty in south London, and the challenges faced by over 7 million people in the UK suffering from food poverty. The regular posts explain food poverty, food insecurity and highlight the huge amount of food wasted in the UK. Cheers Karim, your team is doing some fantastic work. 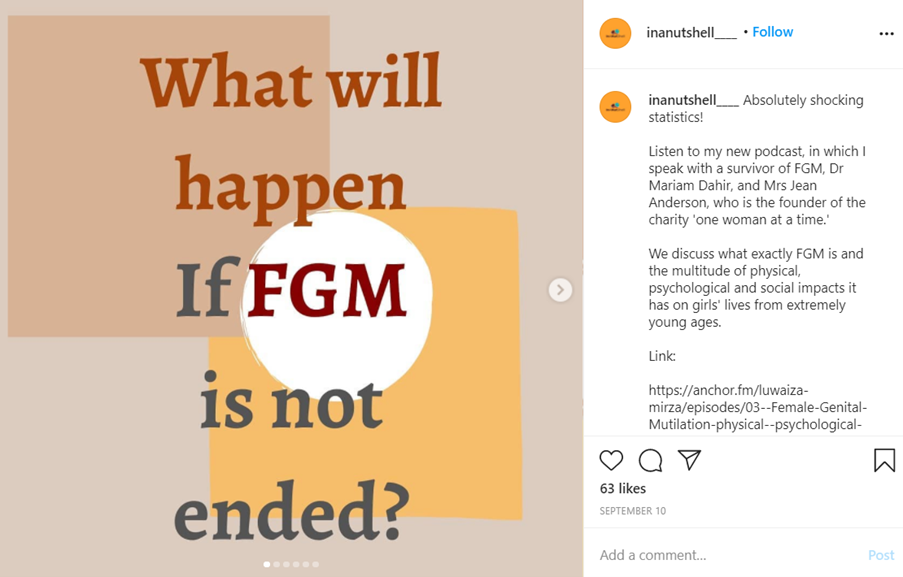 Founder Luwaiza Mirza created the Instagram page In a Nutshell to go with her podcast at first, which explores humanitarian issues she had heard about but never truly understood.

“I made the Instagram page to encourage myself to learn more about current global topics and share my findings with my friends and followers,” Luwaiza said, speaking to The Tab.

In a recent episode of the podcast, Luwaiza covered female genital mutilation (FGM). As a medical student, she is keen to raise awareness and educate professionals and her peers alike about the life-changing consequences of FGM.

“In terms of FGM, it is incredibly relevant, although extremely hidden. Most girls and women who have had FGM suffer in silence and aren’t comfortable enough to share private information. Now with Covid, FGM is important more than ever, especially in developing countries. Lockdown and isolation have meant that people are able to conduct FGM more freely.” Luwaiza has a unique perspective by studying medicine at King’s: “I think for medical students and professionals, it’s all about raising awareness of FGM and what it actually is and being sensitive to those who have undergone it, to provide the best care for them.”

Luwaiza also released a fantastic podcast tackling the Israel-Palestine conflict, which involved two experts from UCL and SOAS. Well worth a listen. 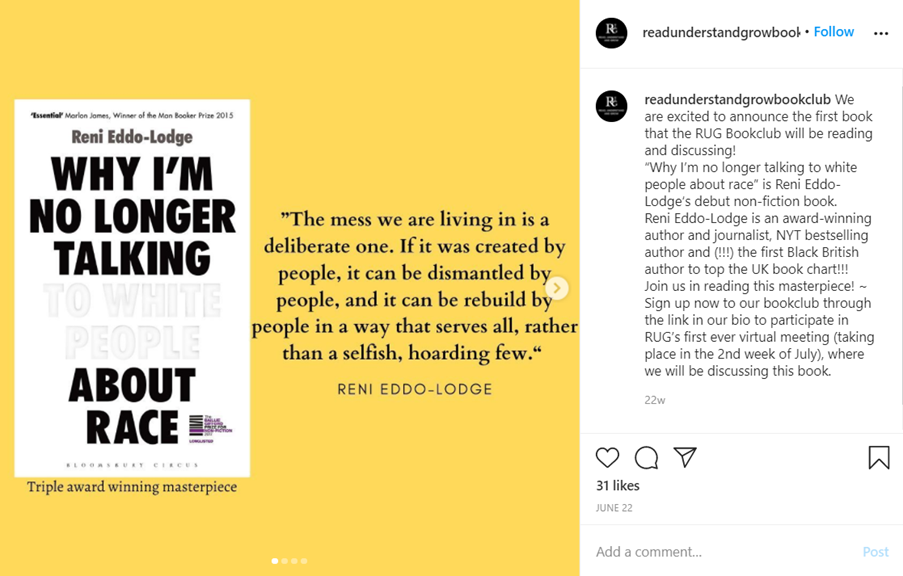 Launched in the wake of the BLM protests, Read Understand Grow book club was formed by Leonardo Morosini and Anita Iuhasz.

On why they started the page, Leonardo says to The Tab: “The aim of the RUG book club is to educate people (including ourselves) about issues concerning racism and other social issues. Most of us have been taught in a Eurocentric way which favours the ideas and works of white people.  Consequently, reading the works of black and ethnic minority authors is a great way to simultaneously promote their works and learn from them.

Explaining their motivations behind educating their audience “Realizing how little we are taught about the issues faced by black and ethnic minorities is what inspired us to want to be more aware of these issues and celebrate the works of BAME authors. Our goal going forward is to keep conversations about important social issues going.”

“Oftentimes, after new acts of police brutality, people go to social media to show their solidarity but unfortunately, the fight often stops there. We want people to actually commit to the work of continuously educating themselves about these issues – not just when it is trendy or when it benefits them.”

The founders stress that their community is open to everyone and a safe space: “The RUG book club always welcomes new members who are willing to question and discuss their beliefs in a safe community, and de-colonise their minds.” 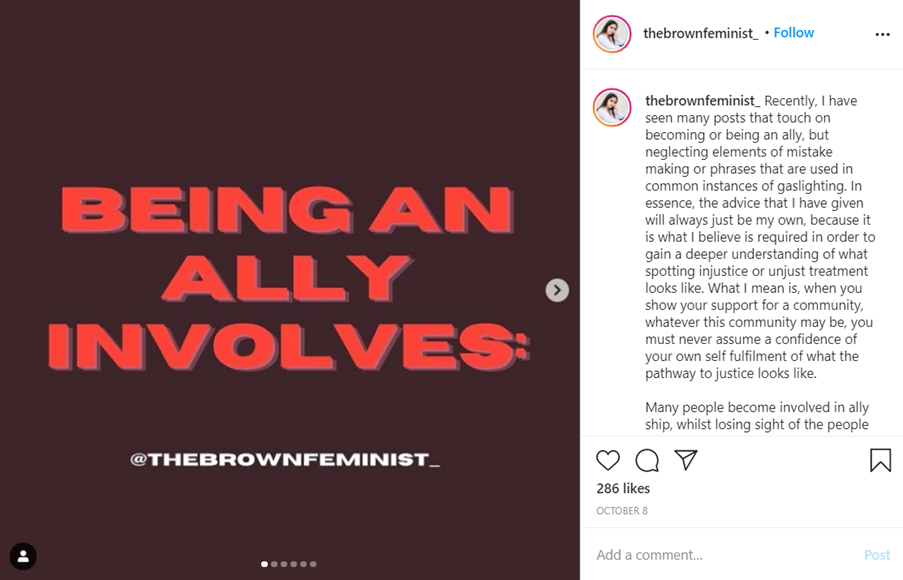 The Brown Feminist account takes on the challenges of feminist identity, Islamaphobia and gender politics. Much of the content promotes intersectional feminism and education about rape culture in the UK.

Some posts also address feminist identity in Britain, from the perspective of the page’s founder Samar Irem Khan, who said to The King’s Tab: “I have become increasingly interested in complexes for young South Asian Women (and women of colour in general) that are common in academic environments. Being granted academic leverage at the expense of operating under others to cover ethnic dimension. It was important for me to express and declutter notions that are often said on our behalf.” She adds “I write about what I know – and try my hardest not to breach that self-contract.”

Samar made it clear for us “South Asian women, in particular, are conditioned and confined to many narrow ideological assumptions, the classic spinster for advocating equality – despite the need for these conversations in our communities. There is a range of cultural setbacks that have fallen on our shoulders. I wanted to create a safe and proactive environment for all women, where these confrontations can happen in a productive manner.”

Samar regularly engages with their following, “I take interest in hearing from students in particular. It’s encouraging to see the relief in these conversations, which is what motivates me going forward.”

•‘Diwali has been cancelled’: King’s students on their celebrations from home

• We spoke to Kanaan Pitan, the lockdown TikTok star and King’s chemistry student