Charles Amos lost a vote of no confidence this afternoon

The King’s Conservative Association has announced this afternoon that their President, Charles Amos, has been removed following a vote of no confidence.

The announcement was made on the Association’s Facebook page that the vote had been unanimous, with only Amos himself voting against his removal.

The vote occurred after Amos made several controversial comments regarding the handling of coronavirus, feminism, immigration and single parenting.

Dear KCLCA Members,It is our duty to inform you that during a meeting of the committee held today a vote of no…

Posted by King's College London Conservative Association on Monday, 25 May 2020

Amos has faced controversy in the past few weeks for his comments on feminism, COVID-19, and immigration. In an interview with The Tab he told us he favours “a fully privatised NHS” and that he is “firmly of the belief that third-wave feminism must be bashed.”

The Association said in the post that these comments were “counterintuitive” to the aim of “fostering impassioned debate on campus and serving as a home for conservatives of all stripes and backgrounds.”

This is contrary to Amo’s own views, who believes that the attention born from his controversial status has been “broadly beneficial to the [Conservative] movement.” 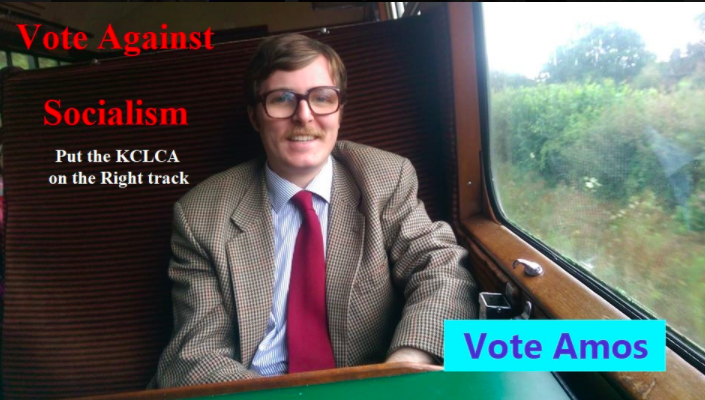 Melissa Gurusinghe, the former President, has been temporarily appointed until an election can be held “in the coming weeks”. Although the Association expressed that Amos is entitled to run in the upcoming election, he was discouraged from doing so, with the Association saying that they hoped he would “reconsider any decision to run in a future AGM in light of his own statement that he “is not passionate about the Conservative party”.

Amos’ former allegiance to the UKIP party seems to have caused division from his fellow Conservatives, despite his assertion that “within the Conservative Association at King’s, Nigel Farage is an immensely popular figure.”

The Conservative Association also expressed dismay towards Amos’ “use of our Association as ‘a vehicle to realise the ends’ of his own personal views,” and state that the Association “does not exist as a microphone for its President, rather, it is the other way round.”

Some have criticised the Association’s decision in the comments of the Facebook post, with Cambridge’s Thomas Neville Society  calling the move “an act of treachery” as well as calling the Association committee “pathetic little bottom-feeders.”