Be warned – their ratings are brutal

Run by Nadar and Zoé, the page works by people sending in a photo of their meal deal, and the pair rate the quality.

Nadar and Zoé have become known for their brutal ratings of the meal deals they are sent, and it's not a surprise from reading their bio: "If you think you have been unfairly rated or wronged, you're wrong." 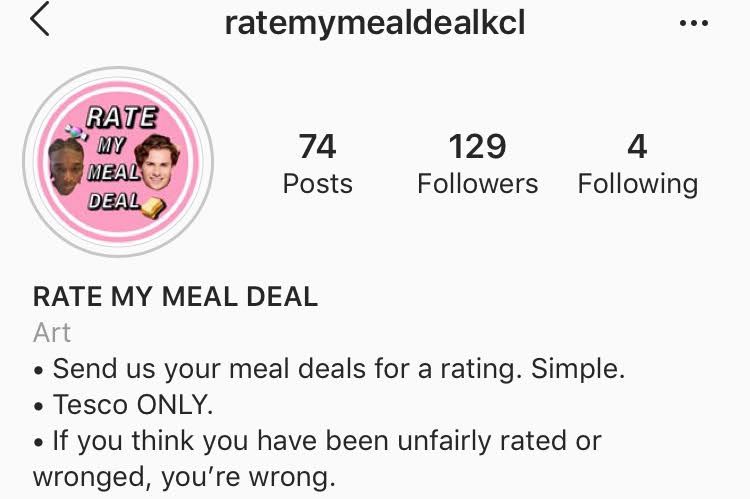 They're not messing around

The King's Tab spoke to the creators of the page to find out the ins and outs of their rating system.

As many great things are, the page was born “under the influence of one too many bevs”. And they don’t take themselves too seriously, by their own admission.

“After uni one Wednesday, I got a meal deal, as one often does. Later on in the night, I went to Guy’s Bar for sports night,” Admin 2 told The King's Tab. The two admins declined to name which is which, for added mystery.

Stepping out to get some air, they thought about the “satiating” meal deal they had had earlier in the night, hoping to get another on the way home. 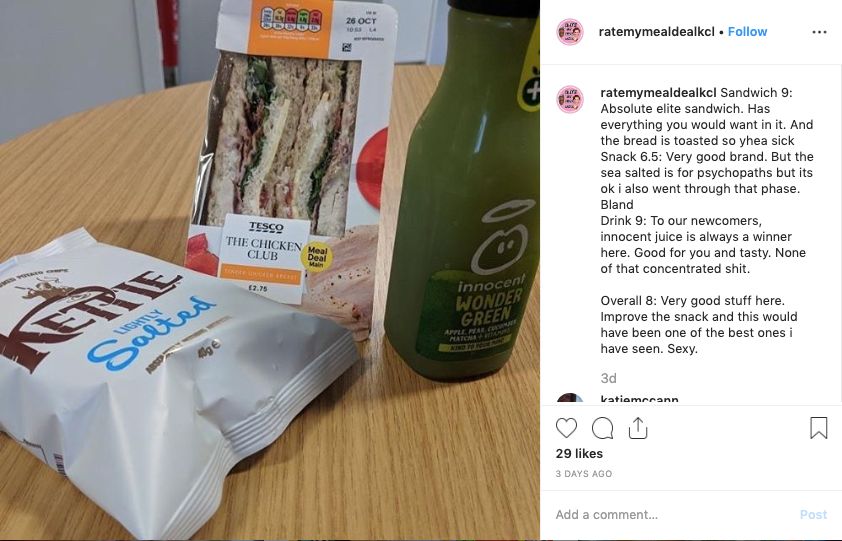 “Whilst in the smoking space, I saw Admin 1 queuing,” they said. “Knowing that Admin 1 also loves a phat meal deal, I spoke to him about my meal quite passionately. We agreed it was a good meal, and suddenly, an idea came to me – I offered we make an account to ‘rate’ other people’s meal deals for jokes."

“It all started there. Since, we have been taking pictures of our friends’ meals,” said Admin 2. “With time, people started sending us their meal deals, and interacting on our page."

The pair did not hesitate.

“On May 29, we received one of the grimmest meal deals of all – prawn layered salad, with Tyrrells crisps and a bottle of coconut water,” they said. “Immediate churn. Disgusting. We’re still traumatised. We advised the sender to get help immediately.

"A few meals have rivalled this one, most of them including prawn or egg mayo because that shit is rank." 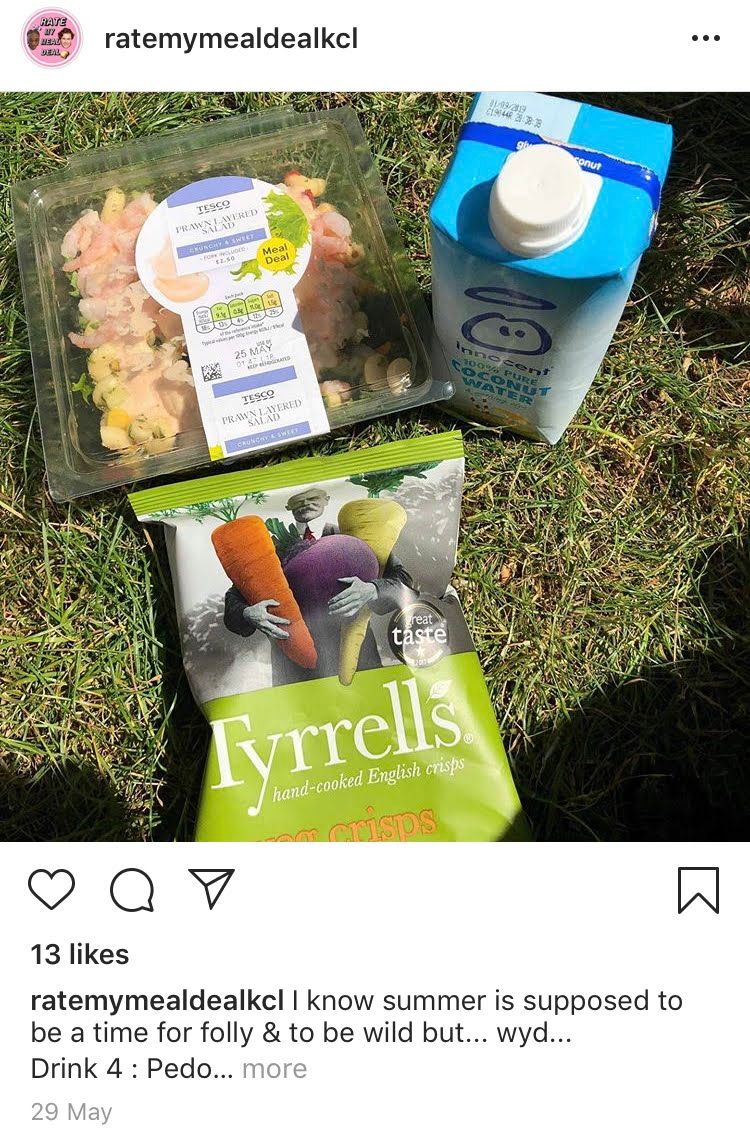 What is the best meal deal you've rated?

“One of the first we have rated. With Walkers Max Paprika crisps, a roast chicken, bacon and avocado sandwich, and an Innocent juice, it immediately became a meal close to our hearts,” they said.

“This meal slaps in part because of the Innocent, which has become a top choice. We often advise this drink because it has less bad sugar than the Naked juices or sodas, and we care about our followers." 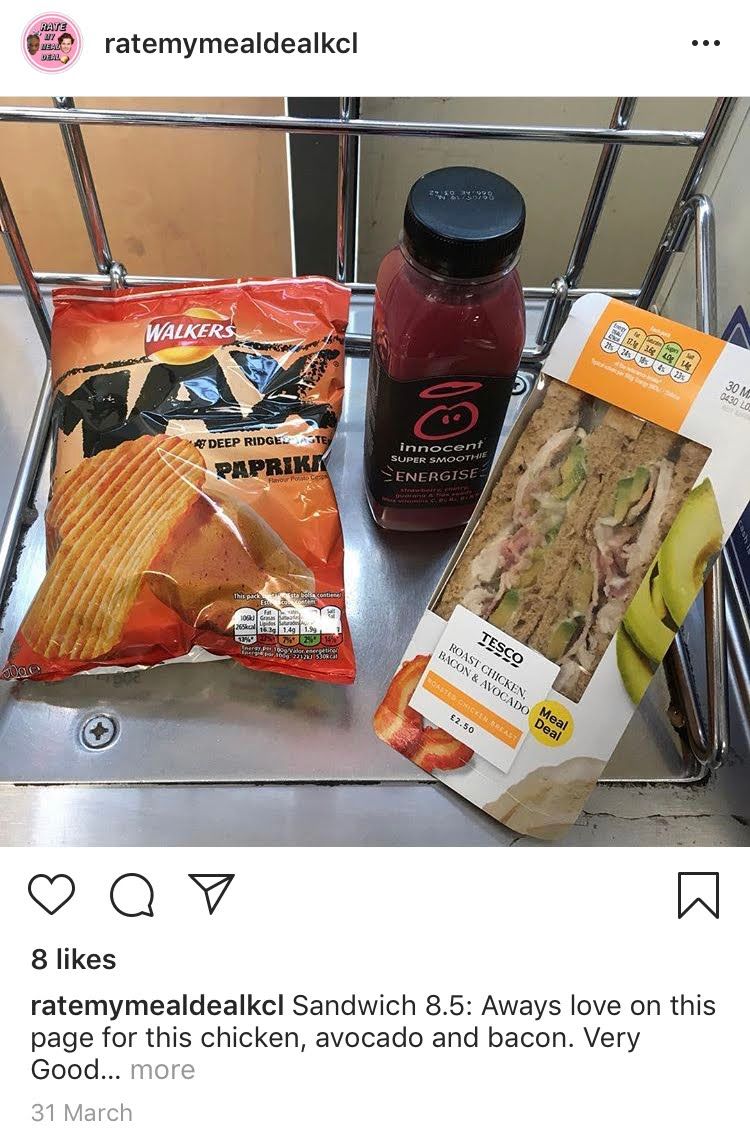 "It immediately became a meal close to our hearts"

They also “push snacks with recyclable packaging", because they are “woke as shit”.

• What your Pret drink order says about your grades

• Strandies: here are the best food options if you’re trying to break your Pret Addiction

• I lived in New York for study abroad, and these are the things that I missed the most about London