‘You were identified on CCTV’: KCL confirms screening of student activists

He said they were under instruction from the Metropolitan Police

Footage obtained by Middle East Eye shows KCL security staff and KCL Director telling students that the Metropolitan Police instructed staff to restrict access to Bush House, and that "a list" of students whose cards would be deactivated was created.

The staff member admits it was "a mistake" that those singled out were also denied entry to other uni buildings, such as the library. The KCL director told students they were identified by CCTV footage of campus protests.

Update – King's have released a statement, saying: "Some members of our community have raised complaints about how arrangements for the Bush House opening, particularly those relating to access to buildings, were managed during the event. In response to these complaints, Dr Ian Tebbett, Senior Vice President for Operations, is commissioning a full and independent review of the arrangements to assess the processes that were followed."

A Security Advisor at KCL, said: "Not being able to get access to the library was a mistake.

"We were under instructions from the Metropolitan Police to reduce access into Bush House due to the event that was taking place.

ALL STUDENTS INVOLVED IN THE CLEANERS CAMPAIGN HAVE HAD THEIR CARDS BLOCKED @KingsCollegeLon https://t.co/xZtAUzIZnT

Asked by students on what grounds was the list produced, Richard Kent, Assistant Director of Campus Operations, said: "It was produced on the grounds of… There are a number of protestors who've been visible at a number of protests over the last year, two years.

"You were identified because you're on CCTV."

The Queen's visit on Tuesday was greeted by an audience of hundreds of students. Her majesty was there to reopen Bush House following its renovation. Story highlights from The King's Tab Instagram story shows she had left by 11am, however students reported ID cards not working until 2:30pm.

Student activists reported their ID cards had been deactivated during the visit, preventing them from entering uni buildings. Several who had been told by security staff they had been singled out spoke out on Twitter.

These initial reports were unconfirmed, as affected individuals did not respond to requests for comment, and instead redirected press enquiries to a statement from Justice4Cleaners, which claimed the deactivation of ID cards "prevented students from attending exams, work shifts, classes and assessed presentations." 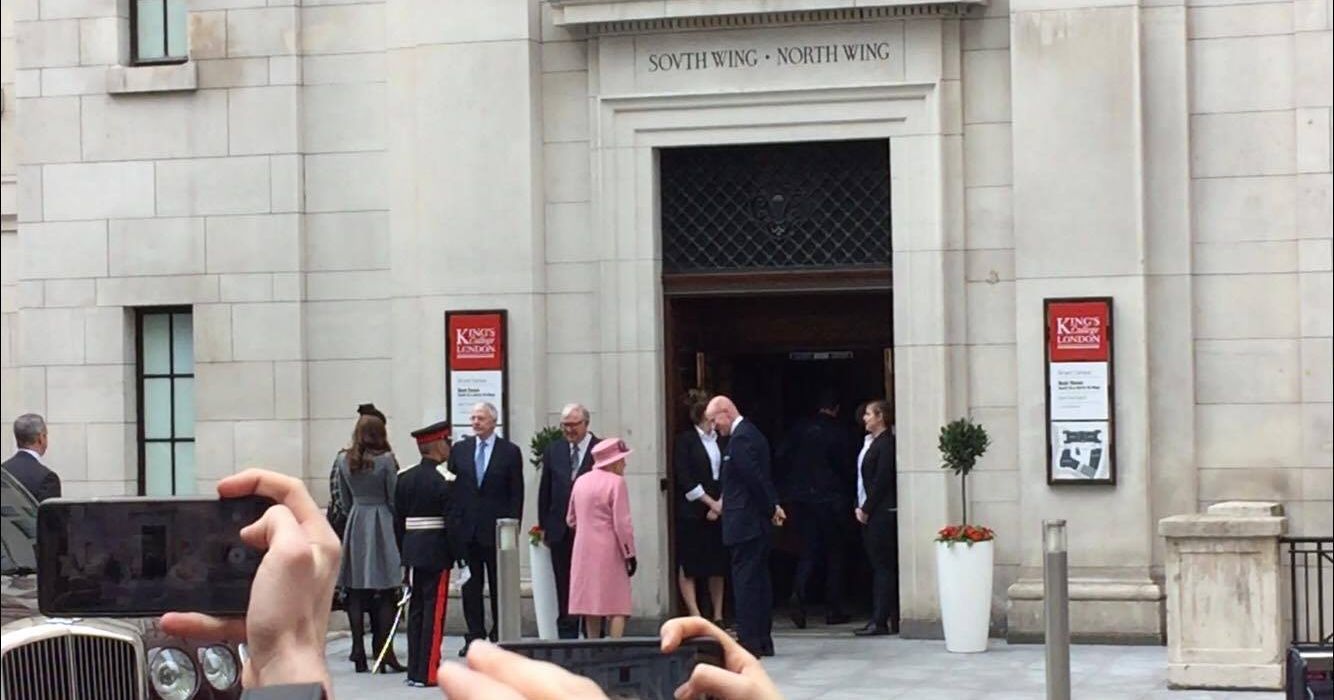 The Queen was there to reopen Bush House

King's College London did not initially confirm reports either, saying: "We had an event today which demanded the highest level of security and we had to minimise movement through buildings for security reasons. At times some of our buildings were not accessible."

When The King's Tab put specific allegations that student activists and students of colour in particular were being screened, King's said: "we have no further comment on our statement."

The Metropolitan Police told The King's Tab: "We do not discuss matters of security."

KCLSU could not initially confirm whether King's had screened specific students, but condemned the potential "surveillance" of students, saying: "It is concerning if students are being placed under surveillance by their university – this is a place of learning, not a police state, and surveillance has a chilling effect on students’ freedom of expression.

"It is especially concerning to us if students of colour are disproportionately being surveilled and profiled as security threats. It is also concerning if access to facilities critical for academic work has been denied without proper information being given to students.

Justice4Cleaners and Action Palestine organised a protest yesterday, and an open letter to Ed Byrne protesting the screening of students has garnered over 350 signatures.

The letter says: "As KCL staff and students, we are deeply concerned by this preemptive act of exclusion from campus of students without just cause.

"None of the students subject to this exclusion have any record of university misconduct. Such profiling of students is based on the political viewpoints and racial and national identities of students, and violates the commitment of KCL to providing a safe and inclusive academic community and campus for all."