KCL Action Palestine, a student group campaigning to end King's "complicity in the illegal occupation of Palestine," staged a protest this afternoon at London's iconic Waterloo Bridge in support of the UN Day of Solidarity with Palestinians.

As well as a huge sign that read "Apartheid Off Campus", the protestors also held green and red flares in the colours of the Palestinian flag over the bridge in a symbolic portrayal of solidarity.

Today, on the UN Day of Solidarity with Palestinians, KCL Action Palestine responded to the call from Palestinian civil…

The group posted a statement on their Facebook page, criticising the university's engagement with Israel and its links with Technion, Israel's Institute of Technology. According to their statement, the Institute develops weaponry for Elbit Systems, a company that allegedly 'makes surveillance and killer drones, large weapon systems, and ammunitions that Israel uses against a *civilian* population. It is also involved in surveillance and monitoring of Israel’s Apartheid Wall, walls along the Gaza Strip, and the US-Mexico border.'

"In addition to this, Elbit Systems tests its weaponry on Palestinians in Gaza, selling those weapons as ‘Field Tested’ or ‘Battle Testes’, to oppressive regimes – such as Saudi Arabia and Myanmar." 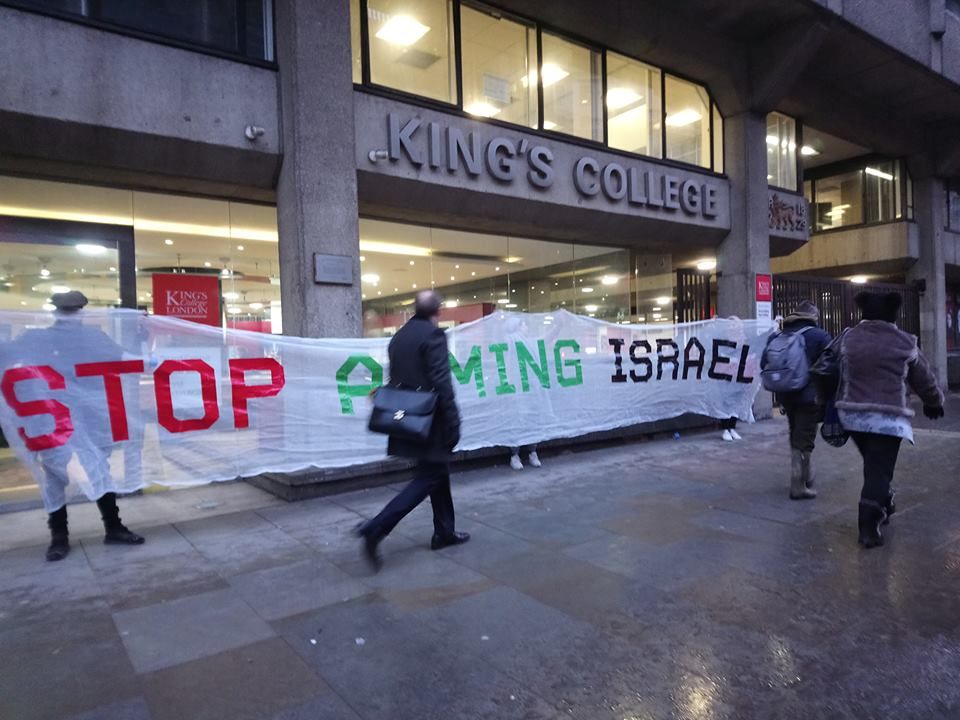 The group have previously staged many protests across King's campuses, including the Strand (pictured)

With this protest, and many of its previous acts, the group is hoping that King's will cease its links with such institutions and are calling on KCL to "respect and welcome its Palestinian students, and end the surveillance and targeting of students who dare to dissent – because the more KCL supports Israel’s oppressive, white supremacist regime, the more violent its attacks on POC students become".