I tried Bush House’s Vegan Cafe for a day

Most people have probably considered going vegan at some point but most of us don’t have the will-power or are just not willing to give up our Sunday hangover favourites.

But with the new Vegan Café opening in Bush House, I grabbed a buddy, put on my most hipster outfit (rainbow t-shirt, dungarees and Nikes) and headed over to see if perhaps I too could become a more interesting person. 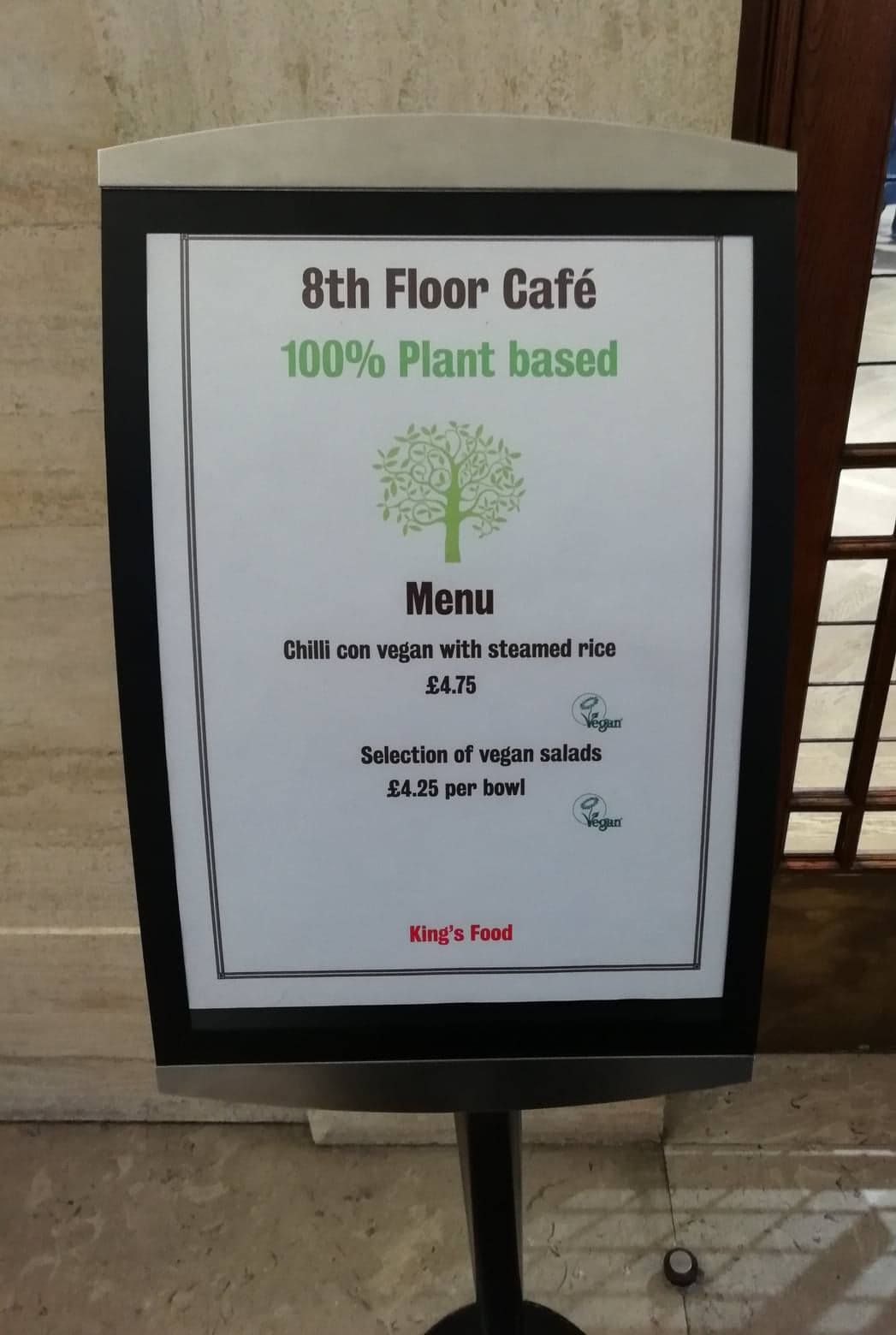 My new-found motivation to save the planet was quickly lost. The salad wouldn't have filled a rabbit. What was there was absolutely stellar but for a pricey £4.25, I was expecting something a lot more than the morsel of food my bowl could hold.

I filled it to the brim with three out of the four salad selections available – edamame and tofu feta cheese, sweet potato salad and a mixed vegetable salad. I would have been happy to pay £2 for the salad as a side dish but £4.25 is steep for a student even if the ceramic bowl did make it aesthetic goals. 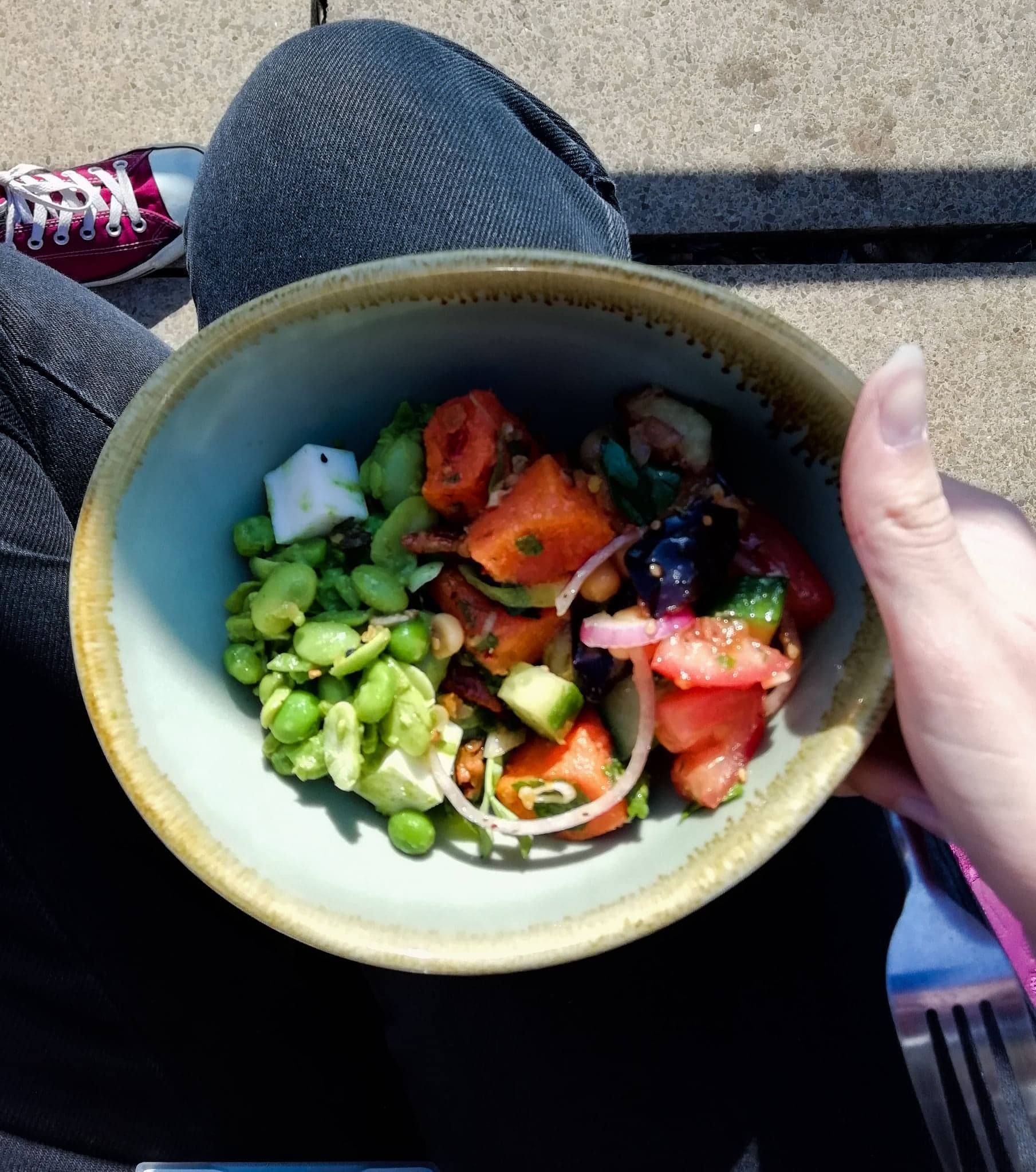 My buddy was buzzing for the advertised Chilli con Vegan (clever) with steamed rice but was told that the dish of the day was a vegan shakshuka. Not exactly what she got. What she received were red peppers and chickpeas floating in a liquid that once resembled tomato sauce. It was difficult to comprehend that just a week ago we were living it up in Bella Italia, using our 50% student discount to eat delicious homemade pizza for the same price. Oh, how we had fallen since.

Although this dish was filling, and the cooked peppers were awesome, most of the dish’s substance came from the chickpeas which texture was so slimy that it couldn’t be finished. 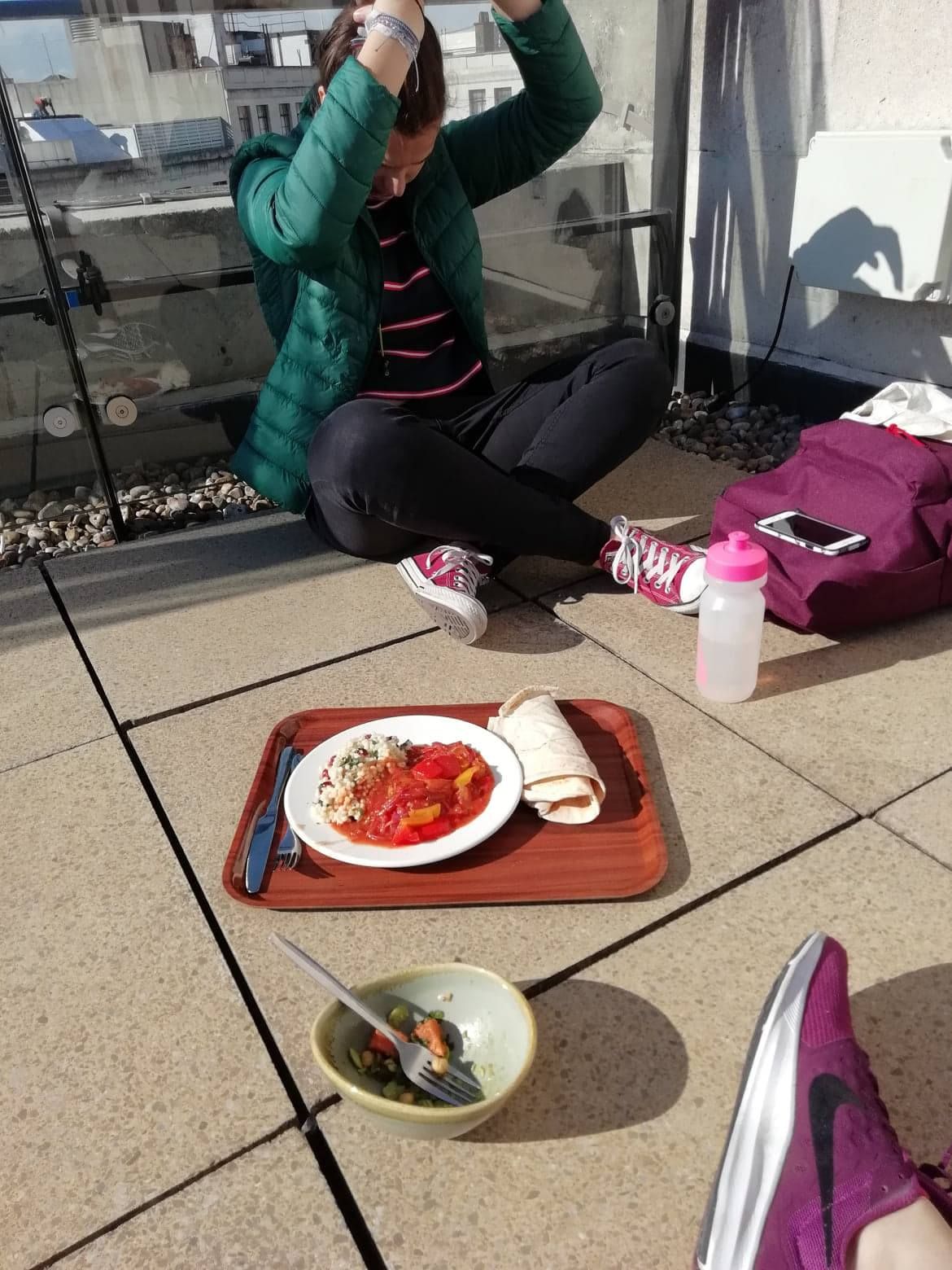 We had given up our seat on the terrace to go grab the shakshuka because, although the cafe opens much earlier, there is only salad available before 12pm. By the time we got back, the only seat left available was on the floor. The cafe was packed but nobody seemed to be eating the food available at the counter. Funny that. But the Vegan Café is situated on the eighth floor of Bush House with the terrace looking out towards the Thames with the London Eye and Westminster in view, so we felt that, really, we had the best seats in the house. 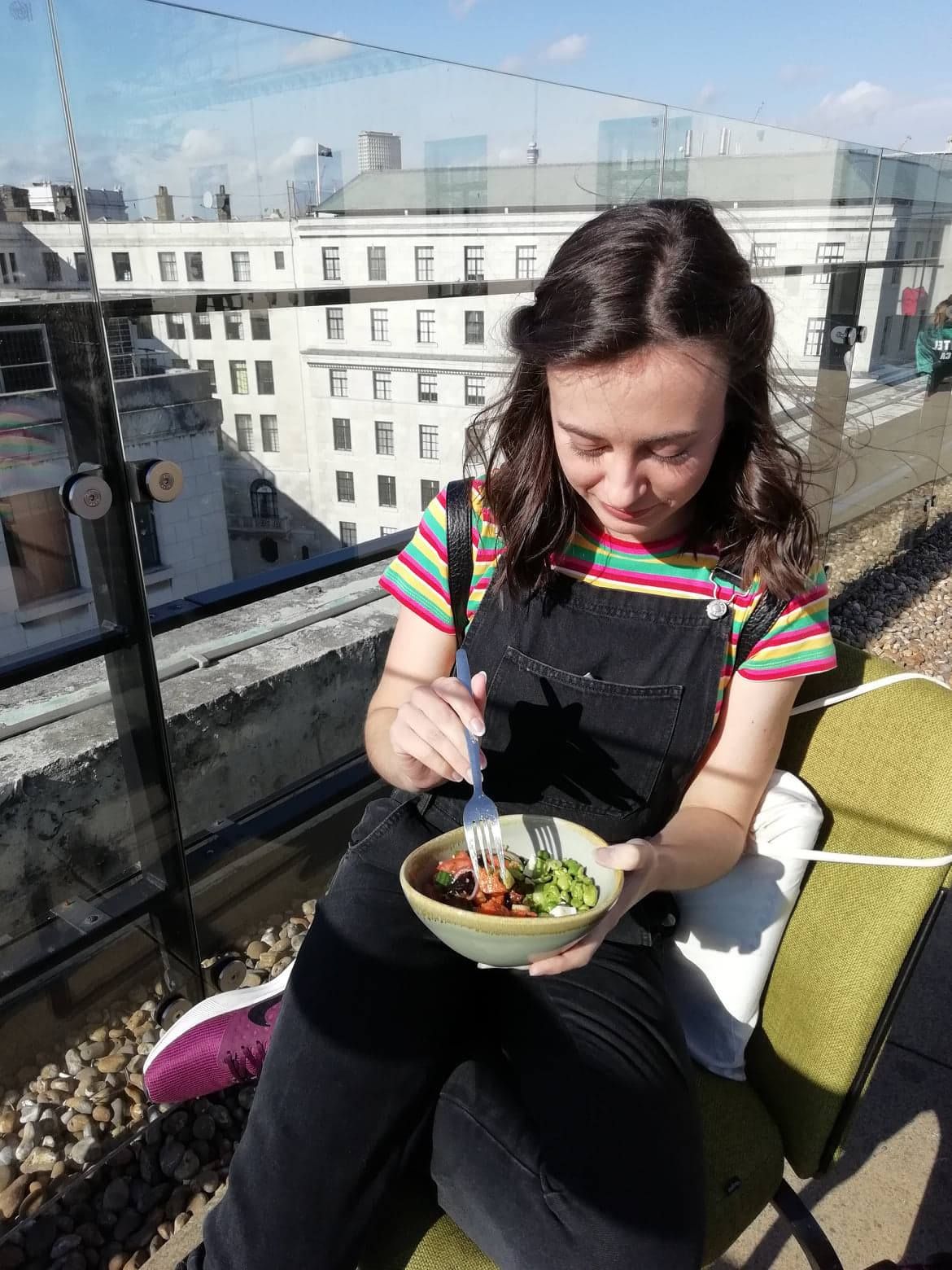 Leaving the cafe, we felt hungrier than we had been before we went in. Our 'bite to eat', having been too literal, only served to whet our appetite for something more substantial.

Let down and disappointed we turned to an old favourite: Greggs’ – the immutable staple of the Strand. The glue that holds every broke and hungry student together. 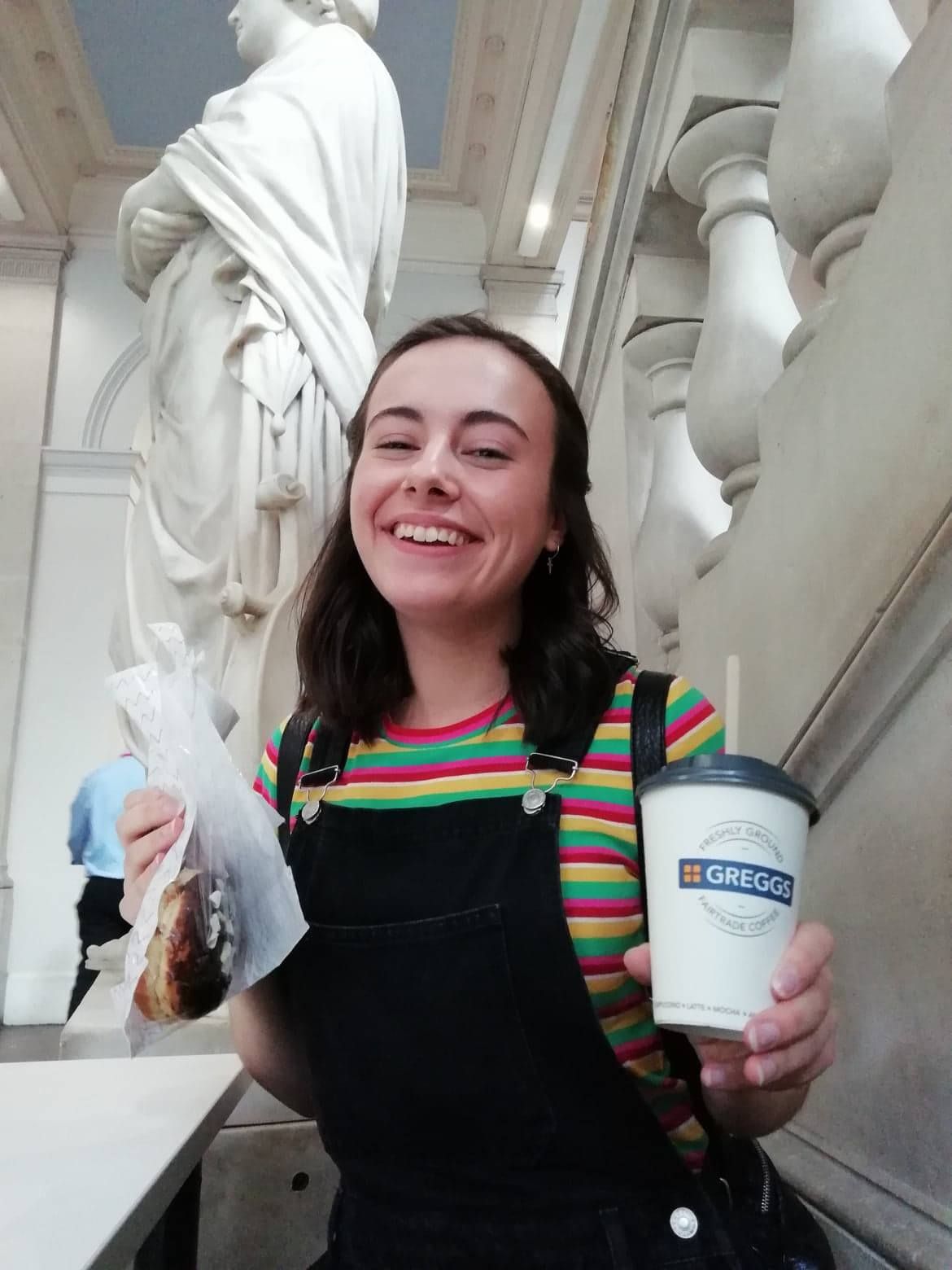 And oh my days. It was orgasmic.

That triple chocolate, gluten included, cream-filled donut was topped with delicate milk-chocolate swirls and when it was paired with a sweet, foamy, full-fat milk mocha it tasted like the stuff of gods.

And that was it. My desire to better our planet was diminished. While I admire those among us who can sacrifice some of their victuals for the greater good, for me, tofu cheese will never compare to a Greggs’ baked good.