After years of staff complaints over unfit working conditions and months of student-staff protests lead by groups such as KCL Justice for Cleaners in support of UNISON, King's Management have agreed to employ their cleaning and security staff directly, last night's Council meeting revealed.

Outside Somerset House where the College Council meeting is taking place. The cleaners situation is being discussed…

Posted by KCL Justice For Cleaners on Wednesday, September 26, 2018

The KCL Justice for Cleaners campaign, lead by students, staff and academics, has been pressuring the university for over three years to directly employ staff rather than to continue employing them from contractors, which meant that cleaning and security staff were not given the same pay and general benefits as those employed directly by King's.

As well as protests and countless meetings with King's managerial staff, Justice for Cleaners has documented the past year of their campaign through a short film directed by two King's students, Leah Rustomjee and Jared Phanco, available on their Facebook page (below).

"They see you as a number, not as a person". Against Outsourcing at KCL.

Faced with systemic discrimination and precarious work conditions, cleaners at King's College London continue to resist and organise. We documented the campaign actions for the past year. A short film by @Leah Rustomjee, assisted by Jared Phanco. Make sure you click "Watch in HD"!

Posted by KCL Justice For Cleaners on Tuesday, September 11, 2018

The campaign's success is a huge step towards ending out-sourcing and creating a fairer, more equal workplace at King's and other UK institutions, with similar decisions also being made this week by other London universities such as Goldsmiths. 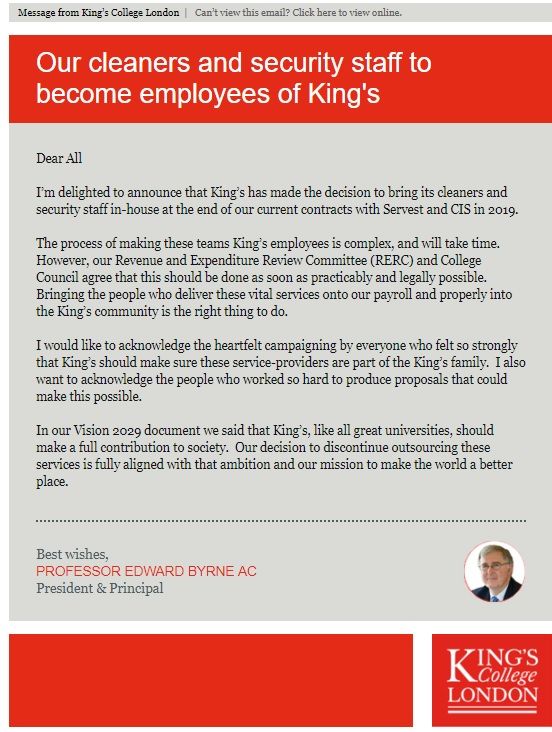 King's principal Ed Byrne has released a statement, sent out via e-mail to all students and staff, announcing the council's decision to bring cleaning and security staff in-house.

However, the e-mail has also revealed that the changes won't take place until after the end of King's contract with Servest and CIS, the cleaners' and security staff's current employer, in 2019.

KCL Justice For Cleaners have released an official statement on their official Facebook page regarding the success of their campaign. The full statement can be read below.

WE WON!! ✊🏽✊🏽 💖 This is the cleaners victory! Since Servest took over and reduced the number of staff in half, they've…

Posted by KCL Justice For Cleaners on Thursday, September 27, 2018