Breaking: Reports of ambulance called at SOAS strike after a lecturer attacked at protest

The lecturer’s knees were dislocated

Earlier today, on the picket lines of SOAS's campus near King's Cross, a staff member has been injured by students attempting to prevent anyone from crossing the picket line outside the main building.

People on the picket were violently attacked by angry students determined to break the picket line. One girl had her leg dislocated so badly an ambulance had to be called. #USSstrikes #ucustrikes #SOAS

Both the main building and the library have been closed.

Today at #soas the library staff was stopped from entering the main building. Lot of people were attacked including my professor who was literally kicked. They also set fire inside the building. Am I in an educational institution??? pic.twitter.com/FWut1GsjZD

After reports that strikes are planned to continue through exam season, following the University College Union's rejection of proposals made by Universities UK earlier this week, tensions are clearly high at SOAS.

A rope line, comprised mostly of student protestors, was photographed physically obstructing the entrance to the main building.

.@soassu stop denying that there is no violence at SOAS today. This is an illegal blockade of the building and is only damaging the legitimacy and effectiveness of the strike action. #UCUstrikes #soas @SOAS #stoptheviolence https://t.co/W7XjJk09nF pic.twitter.com/xlktw0Hw14

Witnesses claim that fires were started inside the main building, while an email sent out to students by administration said that "students are advised that they should not seek to enter the main building," although "it is safe for those who are already inside to remain."

My lecturer has been physically attacked by the @soas picket line today. Is this the sort of attitude that @UCU supports ?

The email highlights that those responsble are primarily students, not staff, and ends with an apology to those affected: 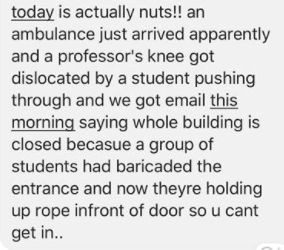 A message we recieved from a student earlier today

"We strongly regret that the behaviour of a small number of students taking action in support of UCU strikes has resulted in our students being unable to continue their learning in the main building at present."

I am going to sneak into the soas library and my lecturers have chained themselves to the building. LOOOOOOOOL I pay 9 k a year for this

An ambulance was reported to have arrived in the wake of the incident. A girl was seen being taken inside, but the condition of the injured lecturer is unknown.

Strikes across the country come to an end today. However, UCU members from London universities, who were late in starting, remain on strike on both Monday and Tuesday next week.