Revealed: The KCLSU candidates identified in Monday’s protests at Strand

A second candidate has been identified

Robert Liow, the only running candidate for Vice President of Welfare and Community of King's College London's SU, was identified by Shout Out UK as a participant in Monday's protest.

The Tab King's can now exclusively reveal that Lauren Wormington, running for the KCLSU position of Vice President Education of Arts and Sciences, was also a participant in the protests.

On 5th March, a confrontation arose between attendees of an event in the Edmond J Safra lecture theatre and a large number of masked disruptors, many of whom claimed to be part of Antifa.

The event, a talk led by Carl Benjamin (aka Sargon of Akkad) and Yaron Brook at the invitation of the King's Libertarian Society, quickly descended into violent chaos, with many participants exchanging blows.

Antifa protestors broke into a lecture, a fight started and the whole building was evacuated

Laura Wormington can be seen in some of the video footage, face uncovered, holding a sign that reads "Students fight the Alt-right."

When approached by The Tab for more information, she referred us to a statement on her election campaign page. 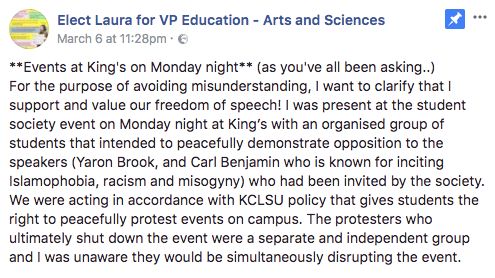 Wormington also wished to emphasise that she was a ticketed guest for the event.

Meanwhile, Liow was spotted in footage taken during the protest, holding a megaphone and wearing a bandana round his neck that was continuously falling down. All other protestors taking part had the same uniform yet people filming the event can be seen to pull them down to identify them.

He posted a statement addressing this on his Facebook saying that "I want to state that I support freedom of speech, which includes the right to peaceful protest, and condemn the use of violence against anyone.

"Tonight's unfortunate actions do not represent the left at King's, nor do they represent me." 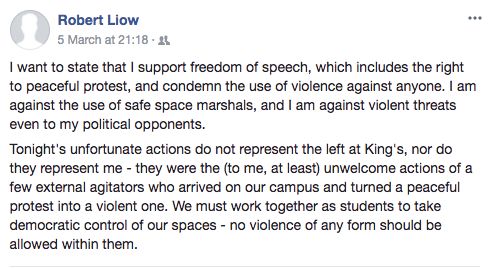 "I am not anarchist, Antifa or associated with Antifa. I masked up in self-defence because people were trying to film me. I did not use violence or condone the use of violence and I was exercising *my* right to freedom of speech by protesting the event peacefully, without the use of violence."

Liow was approached by The Tab King's for more information but he declined to comment.