A full rundown of the GKT Women’s Rugby Team playing KCL in the Macadam Cup, as told by Louise Aaron and Rachel King

Are you ready sports fans? It’s that time of year again. The annual celebration of aggression, skill and post-match frivolity. GKT have been chasing KCL all year and on Wednesday, the match is set to be a flying by the seat of your undershorts kinda ride, for both sides.

Don’t know your hooker from your haka? Your gain line from your grubber? Never fear, the lovely girls of GKT are here to tell you a bit about their on (and off) pitch antics in preparation for the biggest match of the year. Hold on to your scrumcaps kids, you’re about to meet the spiciest rugby girls inside the M25.

Louise joined the squad last year and has been leaving trampled opposition players in her wake ever since. You think this photo’s fierce, when the other team come face to face with Louise they’re begging to go back to touch. 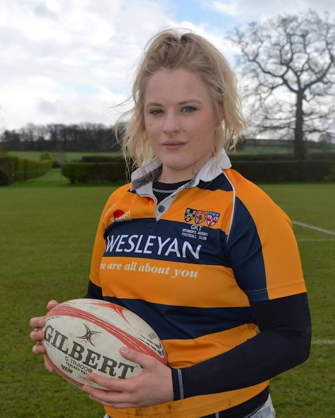 Ball carrying: People bounce off her

Special skill: Causes more injuries to her own team in the scrum than the whole of KCL put together.

Don’t fooled by our resident Canadian’s adorable smile; this little munchkin is excellent at turning over balls in the scrum and will take out KCL players aplenty, even if she does then apologise for the inconvenience. 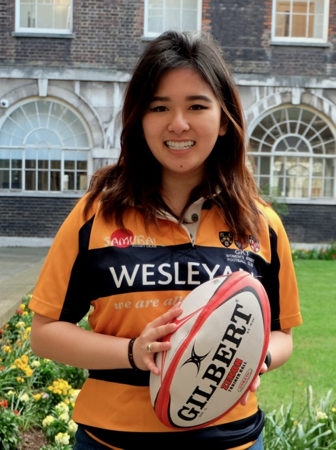 Shocking fact: Has been to see One Direction four times.

Katie plays rugby pretty well for someone who can usually be found captaining KCLs Volleyball team. Look at those quads though. 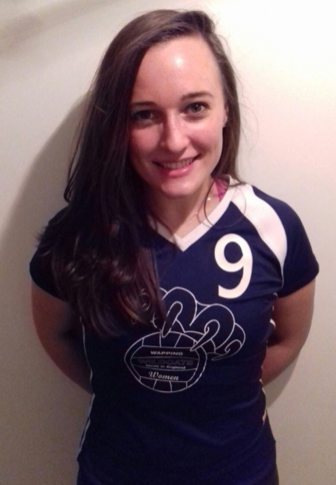 Handling: Successfully transitioned from hitting the ball to catching it

Spiking: Only when provoked

Fun fact: Rumoured to be the bod in ‘that’ GHRFC tie pic.

Rachel is so busy jetting around all over Europe that we couldn’t even get her down for a photo. It’s okay, we still love her. 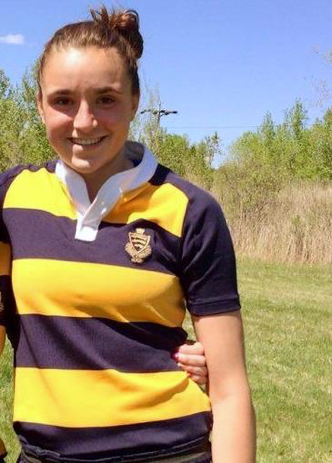 Special skills: Running around the pitch with an utterly confused look on her face (she’s not confused, we think it’s a ploy)

Some say she’s more machine than human and that instead of sleeping she just needs to be charged in NHH for 30 minutes. All we know is she’s not concussed, what are you talking about, her head didn’t even touch the floor it’s completely fine. 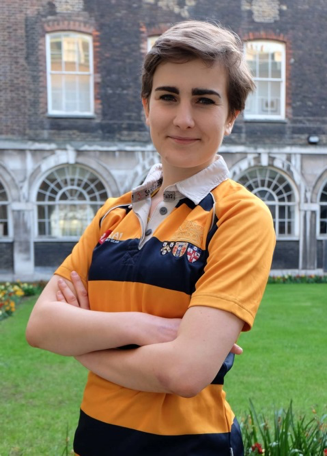 Fun fact: During her stint as Captain Teona once gave a team talk so aggressive the other team wet themselves and went home.

Whilst relatively new to the beautiful game, Keen Louise has taken it in her stride. Known for her motivational (borderline aggressive) team talks and unparalleled dedication to Guys Bar, she doesn’t believe in hesitation, ‘injuries’, or concussions for that matter. 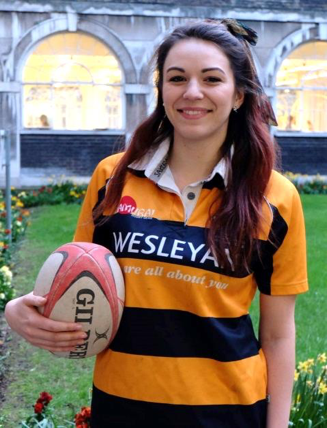 Pace: She’s overly proud of it

Tia is cradling the ball like a baby because the ball is hers. She loves the ball. Do not try to take her ball. She will not let you have the ball. She feels similarly about Parmesan. 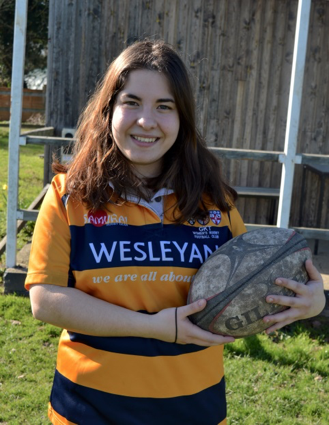 Special skill: Tia’s low centre of gravity and absolute disregard for her own safety means she could probably tackle a wall and win.

Don’t be fooled by her ‘10-era K number, this old girl is still solid as a rock and determined to smash through some KCL girls to prove it. 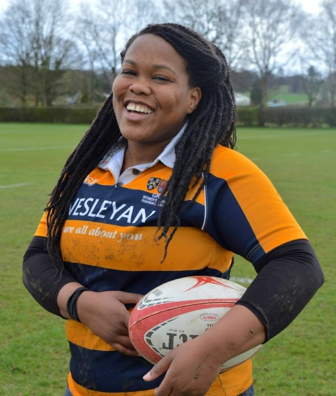 Passing: What does this word mean?

Special skill: Pioneer of the ‘pony-tail tackle’ a dangerous but effective move that will get you carded 50-100% of the time.

New to the squad this year Phine lives, breathes and makes love to rugby. Known for her backchat and zero-tolerance policy on being in the channel, she has the makings of the perfect 9. 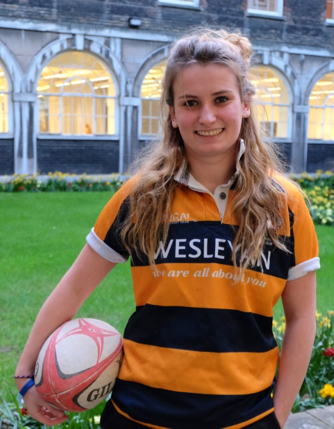 Fun fact: Was once told by a ref to ‘look up integrity in the dictionary.’

An intercalator from Birmingham Emma has taken a break from Netball to try her hand at rugby. She is very shy and will not do the worm if you ask her and has also never stolen food from somewhere that rhymes with Buys Gar. 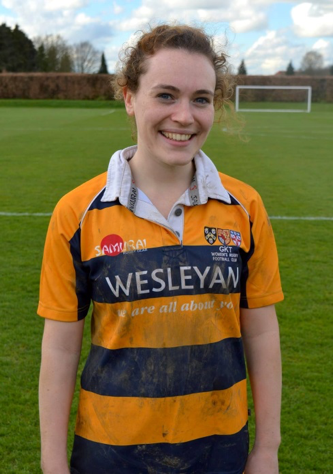 Fun fact: Her tour name this year was ‘Vegetable abuser’. Make of that what you will.

Don’t let this pretty face fool you; on the pitch Circé is about as friendly as she is when you point out she’s not actually from France. 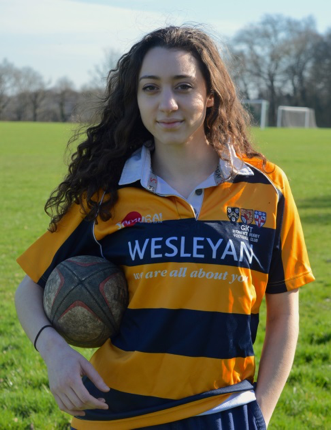 Tackling: Ridiculously fierce, not sure how she manages it

Special skills: Tearing up the dance floor despite the highest injury count GKTWRFC has ever seen.

Raph’s sprinting Bambi impressions are in fact an elaborate scheme to make the opposition underestimate her, along with pretending she doesn’t understand the ref. Hors jeu what now? 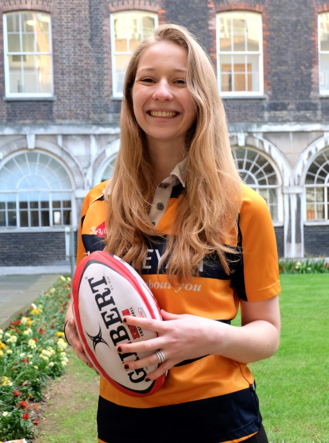 Sasha rocked up to training one day in trainers and leggings having never played rugby and proceeded to become the squad’s top try scorer within 3 matches. We’re a bit jealous really. 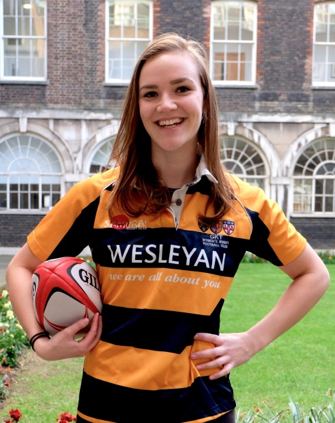 Pace: Generally we just watch her run it down the field

Ability to safely put the ball over the line: Non-existent

This honorary GKT girl has firmly cemented her place on the team and in Guys Bar. The ultimate utility, she’s a Prop who jumps in the line-out and occasionally drops to the wing. We like that. 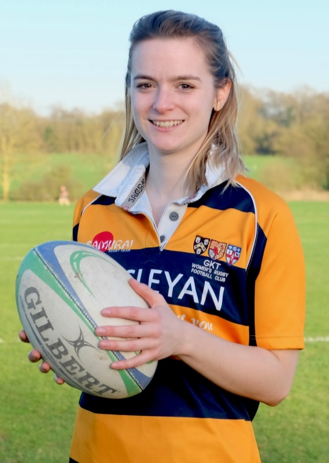 Position: Winger/any other position on the pitch that takes her fancy

Another ex-Captain and solid Full-back, Anna enjoys people getting past her about as much as she enjoys Brexit and the gender pay gap. 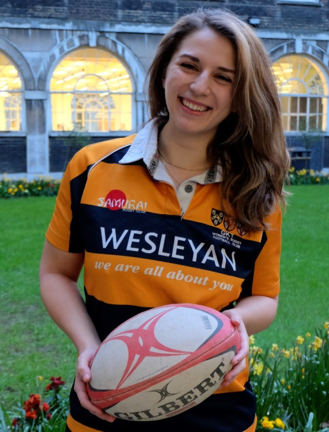 Tackles: Morally better than yours

Fun fact: Has a phobia of bananas which will never ever (ever) get old,

New to the club this year we think Elsa likes us, although her hair braiding technique is so painful we’re not sure. 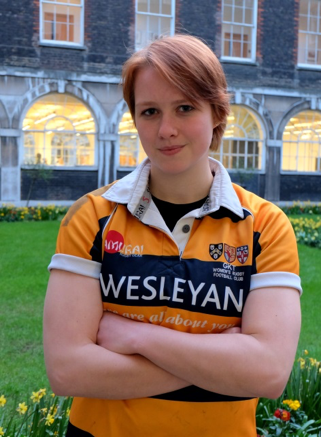 Ability to stick to one sport: 0

Special Skills: Sliding around on her back in skin tight lycra. Ask her about it.

Relatively fresh to the squad, Rhea is quickly proving herself and has succeeded in being the only girl to take it literally when we tell her to fall on the ball (this is a good thing). 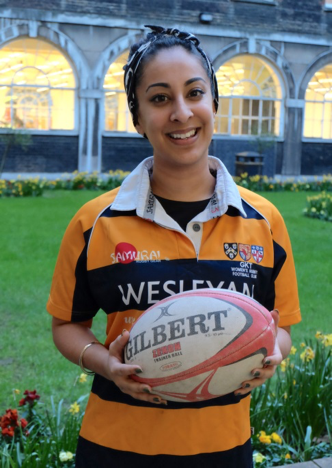 Having picked up a rugby ball for the first time this year Charlotte is looking less like she’s going to be sick on the pitch every week. 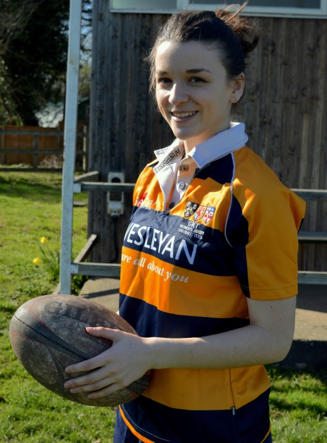 Catching: Ace, almost like she’s played a lot of netball

Passing: Shocking, almost like she’s played a lot of netball

Fun fact: That is in fact exactly how you hold a rugby ball (not).

Despite the fact it’s her last Macadam, Nyima couldn’t quite make it to photos, even when threatened with a number of embarrassing Chicken Cottage photos. Unfortunately we’re too scared of retribution from our beloved former social sec so we’ll go with this slightly more flattering one. 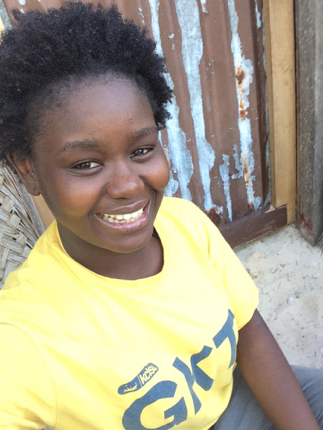 This Fijian warrior just can’t get enough of GKT and is never allowed to leave (although her favourite bev is an Amaretto and pineapple which is frankly just ridiculous and we judge her for it). 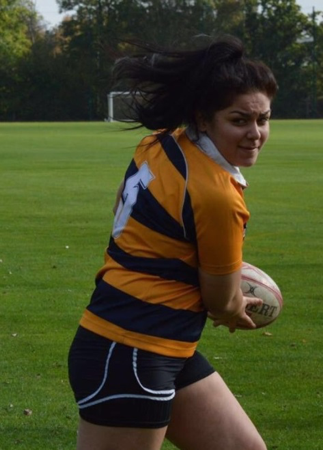 Fun fact: Laurel’s mum (hi Marj) once forced her back on the pitch following an injury because ‘FIJIANS DON’T GIVE UP’.

Georgia joined the squad last year and has been a solid utility forward ever since, but is probably better known for her exploits off the pitch. None of which we can mention here because of the injunctions. 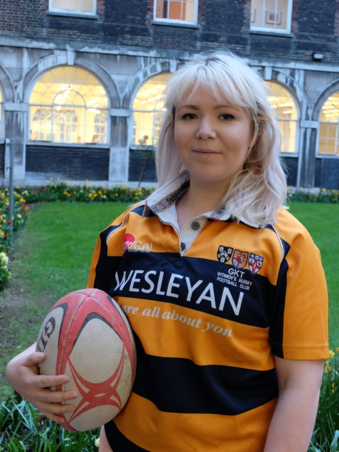 Scrummaging: Solid even when injured

Autobiographical quote: “Working her way through a team near you”.

Despite smashing 4th year, looking after other people’s children, feeding a team of hungry rugby girls and commuting from who knows where, Freya still makes every training session and match with a smile on her face and a box of cookies. 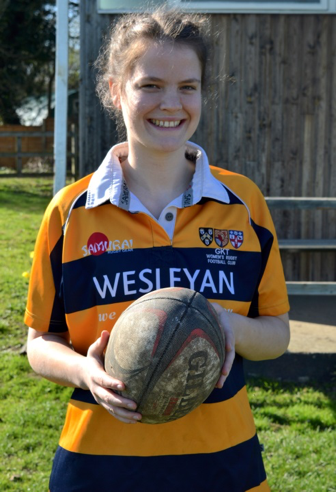 When not on the pitch, Rhy can be found taking some of the many wonderful photos you’ve seen of GKT this year. Including all the gurning ones. 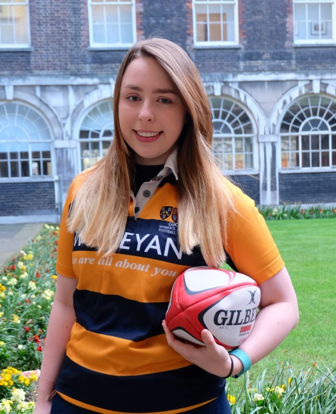 Unflattering photos of other people tackling: Too many

Special skills: Looking after all of biomed and generally being an all-round lovely human.

Saba “Tackle of the year” Zainab 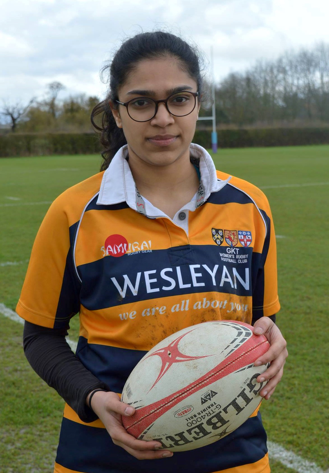 The lovely Saba has recently perfected the tactic of looking all innocent and sweet, then smashing out an epic takedown when you least expect it.

Special skills: Coping with 30 rugby girls asking for random bits of travel reimbursement four weeks late with no receipts, and not complaining about it once.

Due to geographical issues (Macadam week is the perfect time for a ski trip) our other captain hasn’t made the line-up. However, given that she’s done a pretty good job this year we couldn’t really leave her out… 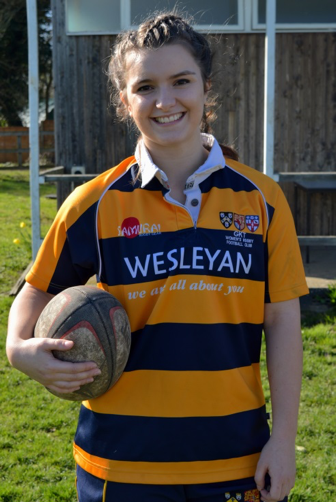 Feelings towards rucking: So much love it’s a bit weird

Fun Fact: Is able to pee in a cup at the back of a moving coach. Is unable to keep said pee in the cup and will be remembered for this forever.

Undisputed Queen of Sass, Vice-Captain Emily is gutted to be out with a nasty ankle injury. Don’t worry though; she’ll be the loudest, most American voice cheering from the side-line. 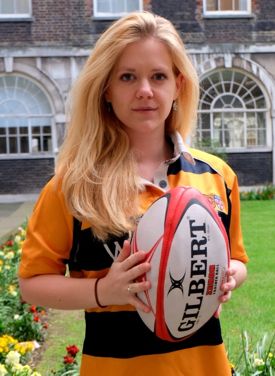 Opposition shins broken in the scrum: 26

Fun fact: Emily once had to sub off because her mucus was triggering her gag reflex.

Another new girl, Jo was taking part in a fantastic 87-0 win when she decided she’d had enough and broke her metatarsal. This was potentially made worse by a dodgy piggy back off the pitch (sorry Jo). 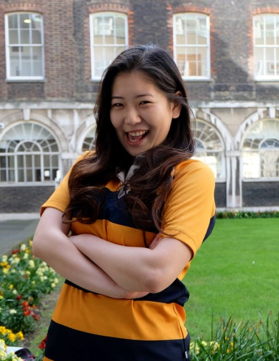 Special skills: Jo has a giggle that makes opposition teams stop running and give her the ball because it’s so cute.

Potentially there was an injury a while ago but we’ve forgotten and are now convinced Eliza is just taking a sabbatical year to become a yogi. 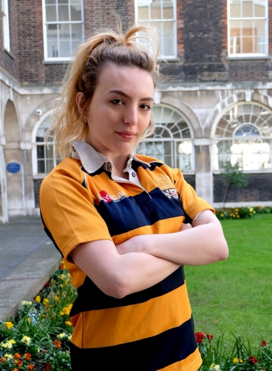 The match is taking place on Wednesday 29th March, at Honor Oak Park Sports Ground. No need to purchase tickets, just come and watch the match at 4pm.