Uncontested elections and VPs breaking rules: HUU democracy is dying and here are the receipts

This MATTERS, we swear

Student election season – second only to Christmas in terms of joy and meaningfulness – is well underway at Hull.

Yet, all is not well. The Tab Hull can today reveal the dire state of democracy at Hull University Union (HUU).

In a series of DAMNING revelations, we tell you, the students of Hull:

– Minutes of Union meetings aren't being made available, meaning you can't see how decisions are made

– Student turnout in elections is as bad as it's ever been.

The problem's got so bad that candidates for HUU positions are attacking HUU in their manifestos. Danny Ingram, a candidate for President writes: "Many people have been concerned about scrutiny and democracy at HUU for years, which is why we're so eager to radically reform the Union."

From mass-uncontested elections to your elected representatives apparently refusing to do their jobs properly, The Hull Tab asks whether it is any wonder participation in elections are so poor.

Despite this shocking state of affairs, it doesn’t look like things are going to get much better next year.

Of the 36 positions up for election, 55 per cent received no nominations at all. Luckily, people put themselves forward for all the paid VP roles.

A further 20 per cent of the positions received only one nomination, therefore they will go uncontested with students only having a choice between the single candidate or voting to re-open nominations (RON)

Mind you, no election result can be poorer than Michael Howe’s election as the Business School’s representative on the Union Council in 2017, who received just ONE vote and WON

According to the Union’s Standing Orders (the rules put in place to govern how things should be run), your elected representatives should write a fortnightly report detailing both what they have been doing for the past two weeks, and a breakdown of engagement they have had with students.

It's compulsory, and "takes about 10 or 20 minutes to do", according to a current member of the Exec.

However, The Hull Tab can reveal that HUU elected officials – paid between £18,000 and £19,000 – have been ignoring this duty, which we believe is vital in holding them to account.

The worst of all the Vice Presidents in terms of filing reports has been Isobel Hall. She's the current President for Education, and is now running for President in this year’s HUU elections).

Of the 13 available "Union Executive Committee" meeting minutes, Isobel only submitted her compulsory report up to scratch three times.

The report she submitted on the 4th December included her moaning at the end of the report that the form took her a whole 1 hour 15 minutes to complete! 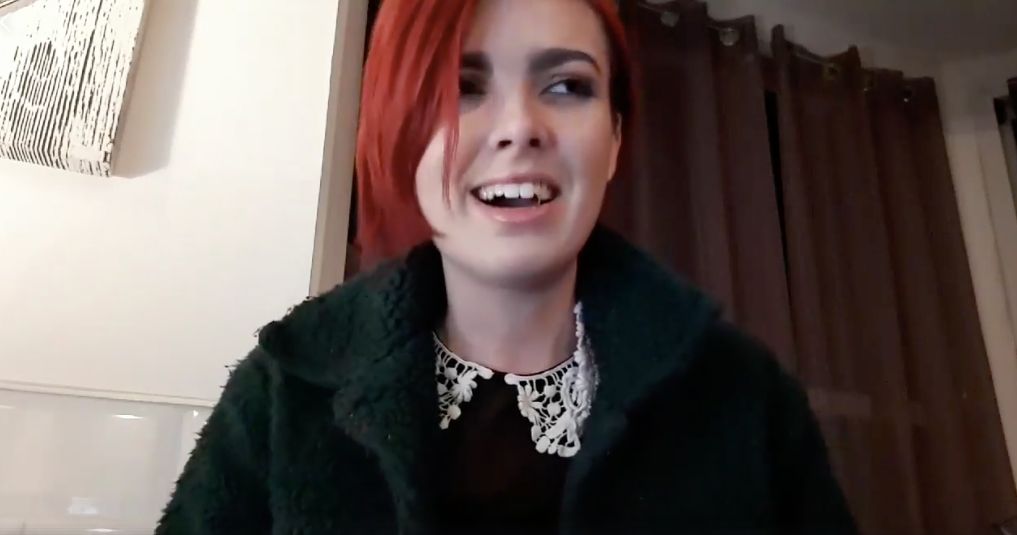 A still from one of Isobel's campaign videos

Another HUU official has told The Hull Tab that on one occasion she said the entire exercise was "a waste of her time".

The document also asks for an "Engagement Breakdown" of their time spent interacting with fellow students.

Here we can see the President, Osaro Otobo, detailing her student engagement for the previous two weeks in her report of the 26th October 2018. 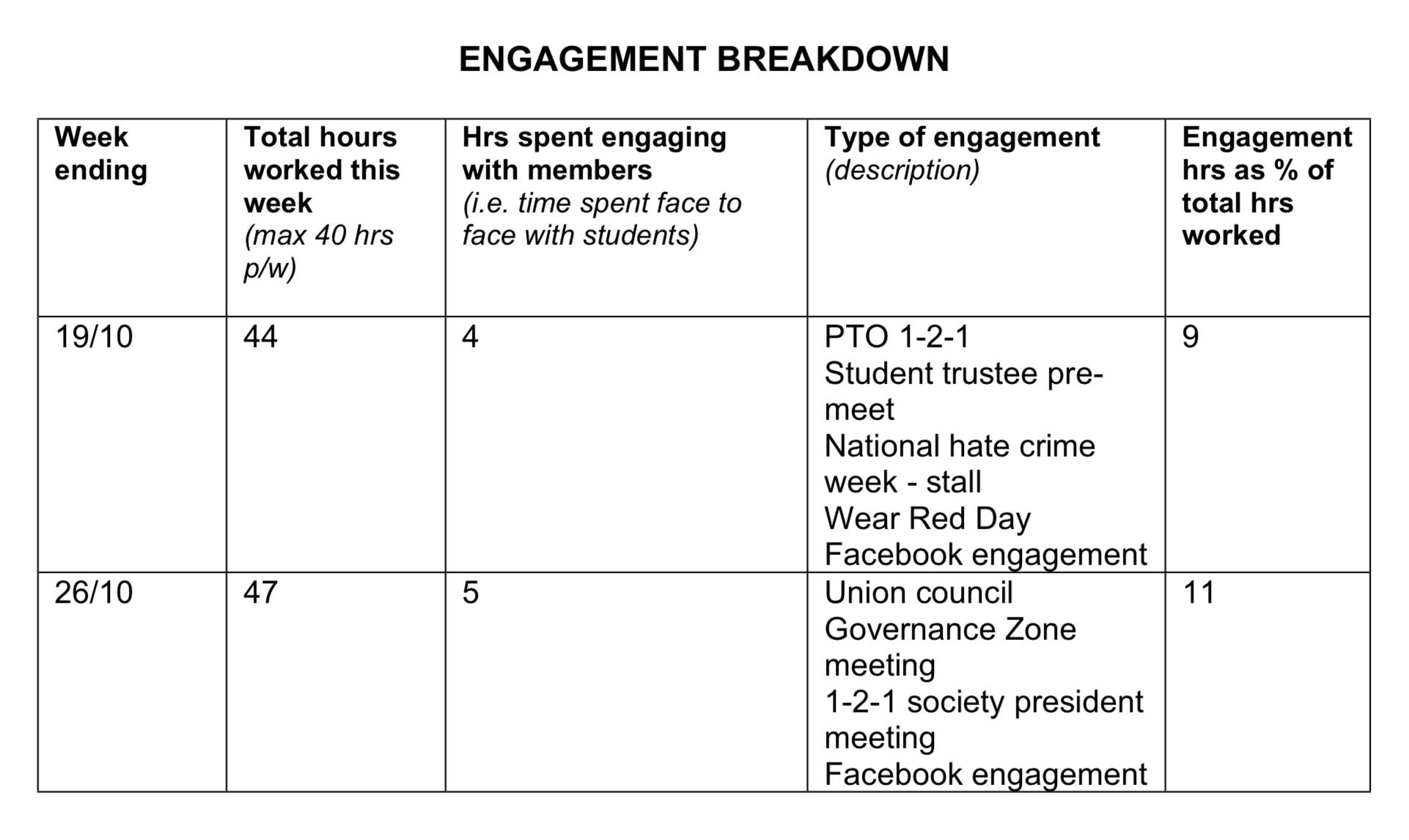 By contrast, Hall elected to actively forgo the scrutiny exercise, saying it's "not a fair indication of the work ethic of the individual". 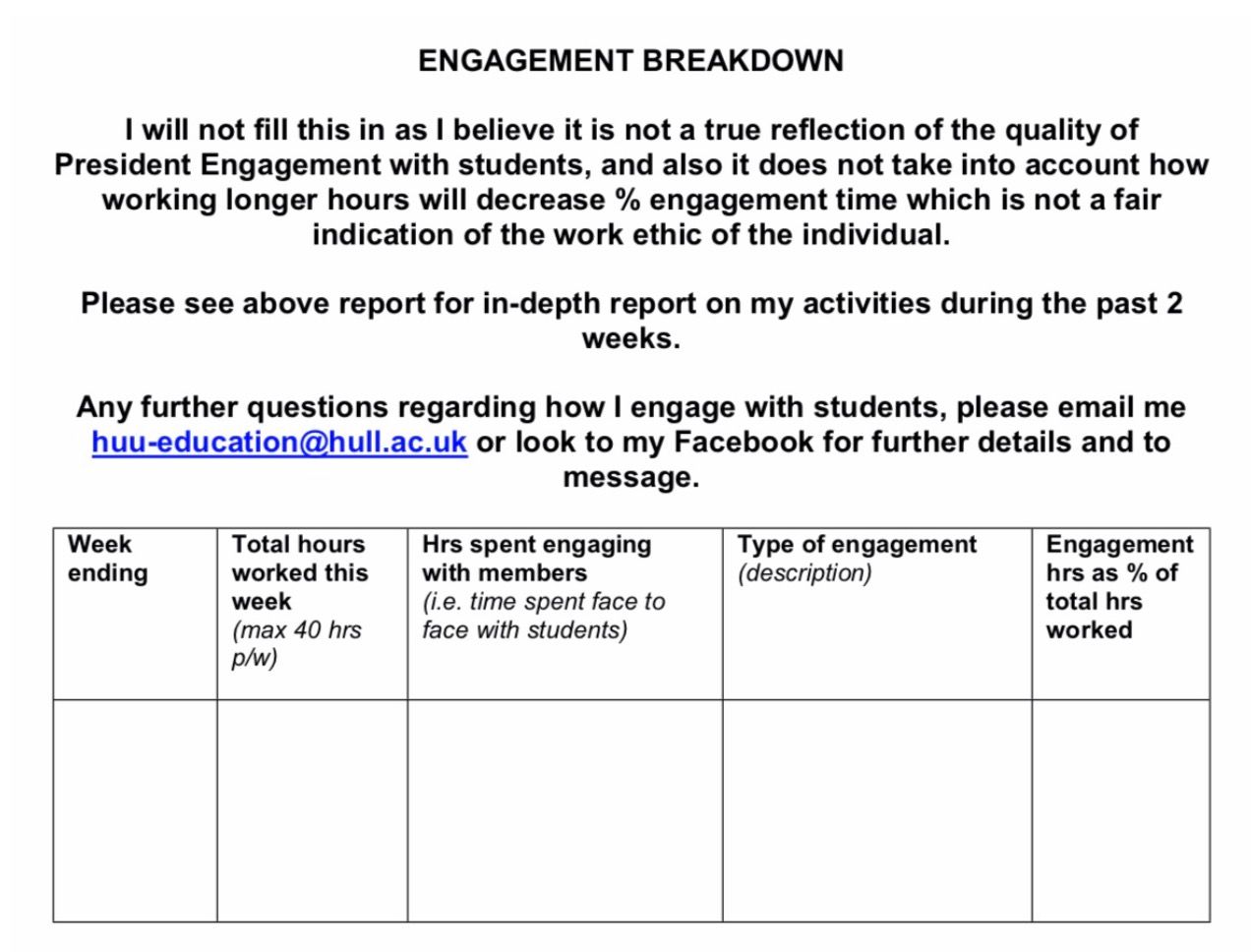 Another week she merely wrote “I can't remember !”

This has raised questions at HUU meetings. In the UEC minutes of the 13th November 2018, Isobel’s colleague—the President for Welfare and Community Andrew Costigan—formally questioned why her fortnightly report had not been written.

In a statement to the Tab Hull, HUU said: “Union Executive Council (UEC) is a formal meeting of the full-time Presidents of the Students’ Union. One of the functions of the meeting is for Presidents to report their progress and activities.

"The responsibility to scrutinise the reports, which contain progress on their objectives and how they have represented students in their position, is with the President team.”

Isobel did not respond to repeated requests for comment, or to any questions The Hull Tab had about the issue. However, on Facebook today her campaign page posted: "Student media has a massive role to play in our Union and we should be doing more to champion them!"

In a further blow to scrutiny of the University Union minutes for the five "zones" (Governance, Education, Activities, Sports and Welfare—each zone being headed by the respective president where they are scrutinised) have not been made available for well over a year.

For example, minutes for the "Welfare & Community Zone" have not been made available since March 2016.

Whilst a spokesperson for HUU informed us that their standing orders do not dictate the publication of minutes, merely that zone reports are included in Union Council minutes, you can see below how lacking these reports are in comparison to the old minutes. 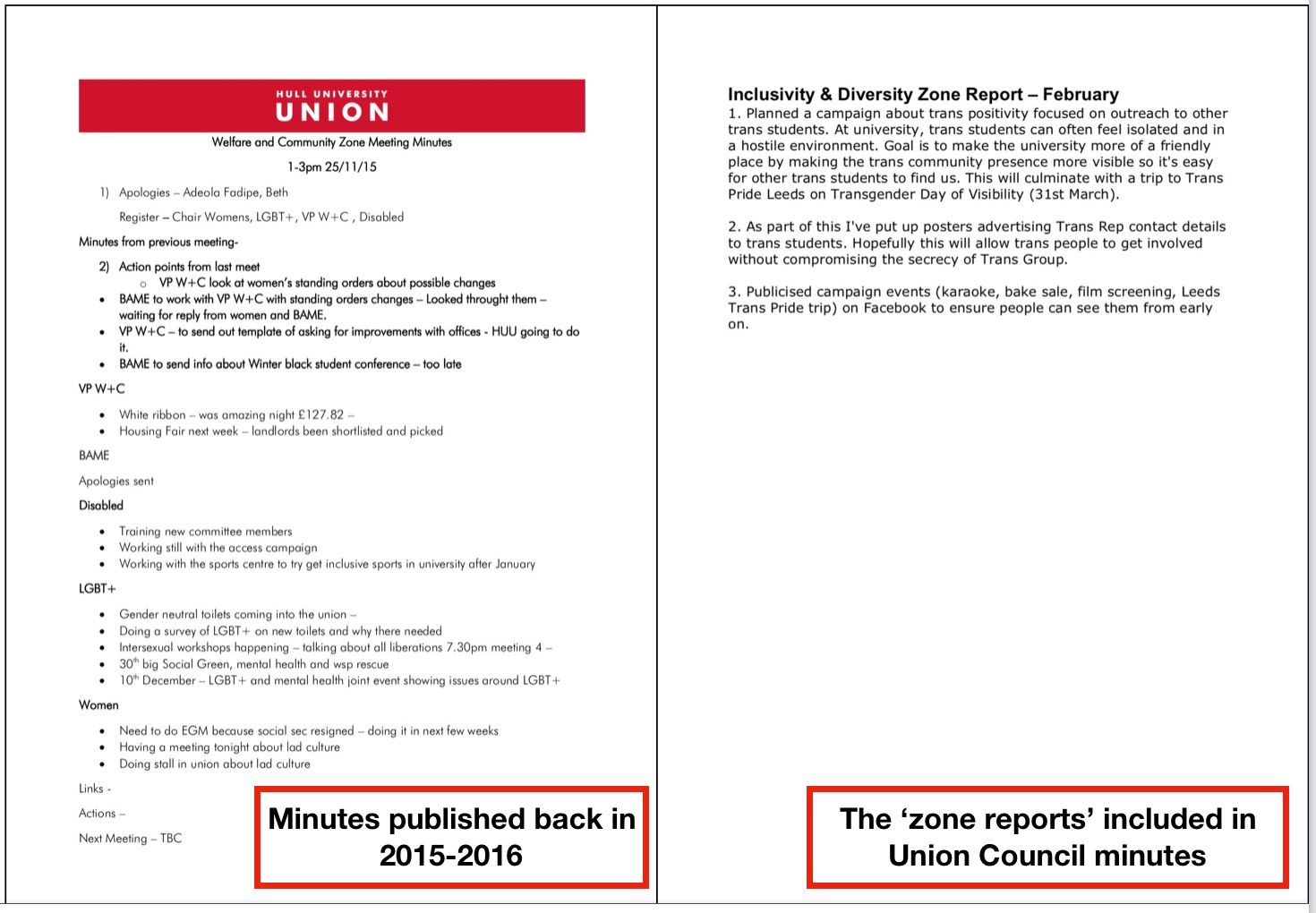 Danny Ingram—a HUU councillor for scrutiny and one of Isobel's opponents in the President election—said in his manifesto: "Many people have been concerned about scrutiny and democracy at HUU for years, which is why we're so eager to radically reform the Union." However, due to union campaigning restrictions, he was unable to give a specific comment directly to The Hull Tab.

Students have stopped giving a shit anyway, so it's fine

Our report bodes badly for expectations of student turnout for the elections also.

Last year turnout fell to a record low of 14.8 per cent—down from 20.9 per cent in 2014. A result which the Union Election report optimistically described as “particularly positive”.

– The Union relapsing in its quality of zone minutes

– Little chance of things getting better next year

– And a student body who don't care

We hope you have a wonderful election season!

The Hull Tab reached out to Isobel Hall for comment.

Some course student numbers have plummeted by over 50 per cent in two years: might yours be cut next?