They’re cracking down on ‘Desk Hogs’

Library staff have been removing people's stuff from their desks if they leave it unattended for an hour.

The staff will place a warning leaflet on a desk if they see someone's stuff has been abandoned, and give them one hour to return before items are removed.

If the items are left unattended for over an hour, library staff will remove them and place them in the lost property. One student in favour of the system told The Glasgow Tab anyone who left their stuff on a desk for an hour "surrendered their right to not have it moved." 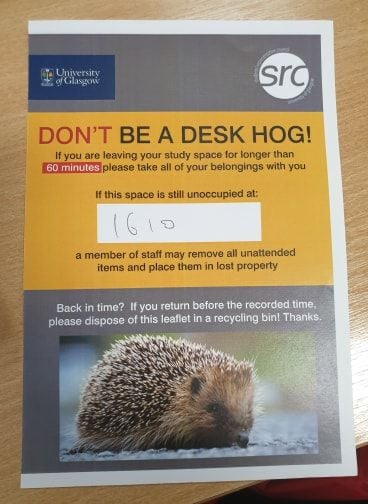 The leaflet reads: "If you are leaving your study space for longer than 60 minutes please take all of your belongings with you.

"If this space is still unoccupied a member of staff may remove all unattended items and place them in lost property."

Some students were taken aback by these leaflets. One told The Glasgow Tab: "I don't think it's fair for library staff to move their stuff without permission."

Another said if you leave your stuff for that long when other students need a space, then you have "surrendered your right to not have it moved".

The Glasgow Uni SRC has long been campaigning for people to stop being "desk hogs", but what exactly is a desk hog?

According to the leaflet, a desk hog is someone who takes up a space in the library with all their stuff, then leaves it for long periods of time, resulting in fewer study spaces being available for students who need them.

This has caused frustration for staff and students, especially around exam time. 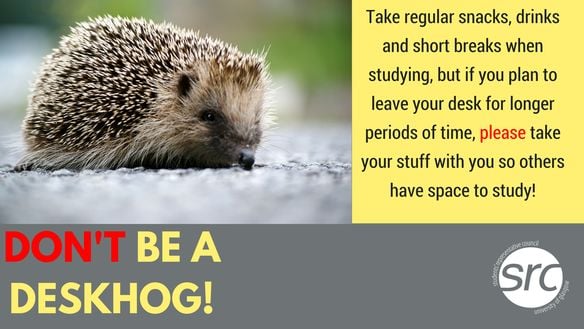 A similar poster in the library reads: "Take regular snacks, drinks, and short breaks when studying, but if you plan to leave your desk for longer periods of time, please take your stuff with you so others have space to study!"

What do you think? Should library staff be removing people's stuff after an hour?