‘This will not be the case at Exeter’

The University of Exeter have denied rumours that some students will not be able to graduate this year following extensive strike action.

A spokesperson for the University told The Exeter Tab: "Any industrial action will not stop students being able to graduate or continue to the next year/stage of their studies."

This comes after a leaked email between Students' Union presidents revealed that some students will not be able to graduate as a result of the upcoming strikes. 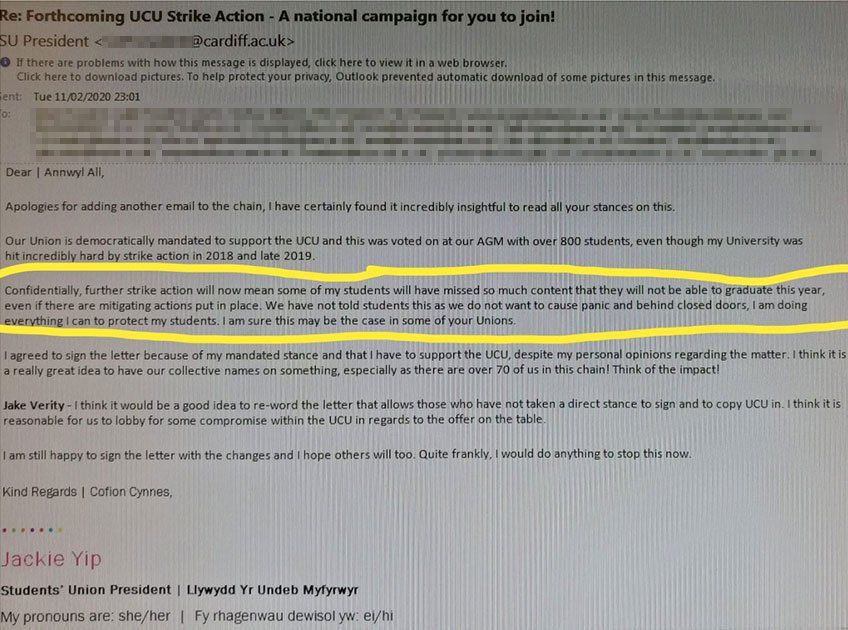 In an email chain between over 70 SU presidents, Jackie Yip, Cardiff SU’s president, says: “Confidentially, further strike action will now mean some of my students will have missed so much content that they will not be able to graduate this year, even if there are mitigating actions put in place.”

She adds: “We have not told students this as we do not want to cause panic."

Universities across the country are due to be hit with a further 14 days of strike action at the end of the month, after the UCU voted in favour of action over pay, conditions, and pensions.

A spokesperson for the Exeter Students' Guild told The Tab Exeter: "We are not currently aware of any issue with Exeter students graduating as a result of strike action."

Both the University and the Guild have encouraged students who have concerns regarding the strike action to consult the guidance on the University's website.

Read the full email below:

“Our Union is democratically mandated to support the UCU and this was voted on at our AGM with over 800 students, even though my university was hit incredibly hard by strike action in 2018 and late 2019.

“Confidentially, further strike action will now mean some of my students will have missed so much content that they will not be able to graduate this year, even if there are mitigating actions put in place. We have not told students this as we do not want to cause panic and behind closed doors, I am doing everything I can to protect my students. I am sure this may be the case in some of your Unions

“I agreed to sign the letter because of my mandated stance and that I have to support the UCU, despite my personal opinions regarding the matter. I think it is a really great idea to have our collective names on something, especially as there are over 70 of us in this chain! Think of the impact!

“Jake Verity [Sheffield SU president] – I think it would be a good idea to re-word the letter that allows those who have not taken a direct stance to sign and copy UCU in. I think it is reasonable for us to lobby for some compromise within the UCU in regards to the offer on the table.

“I am still happy to sign the letter with the changes and I hope others will too. Quite frankly, I would do anything to stop this now.”

• Exeter lecturers speak out on why they’re striking

• Exeter’s Class of 2019: The best dressed at graduation