New initiatives are being taken to improve student welfare

The University of Exeter have responded to a petition to increase safety measures in the city after a student was sexually assaulted on St. German's road last month.

Third year students Millie Chatfield and Izzy Smith, who created the petition, met with the Elected Officers of the Guild to discuss how to secure action from the petition, which now has over 12,500 signatures.

A meeting with University senior management was secured last week, which prompted a Task and Finish group to be set up to discuss how student welfare in Exeter can be improved. 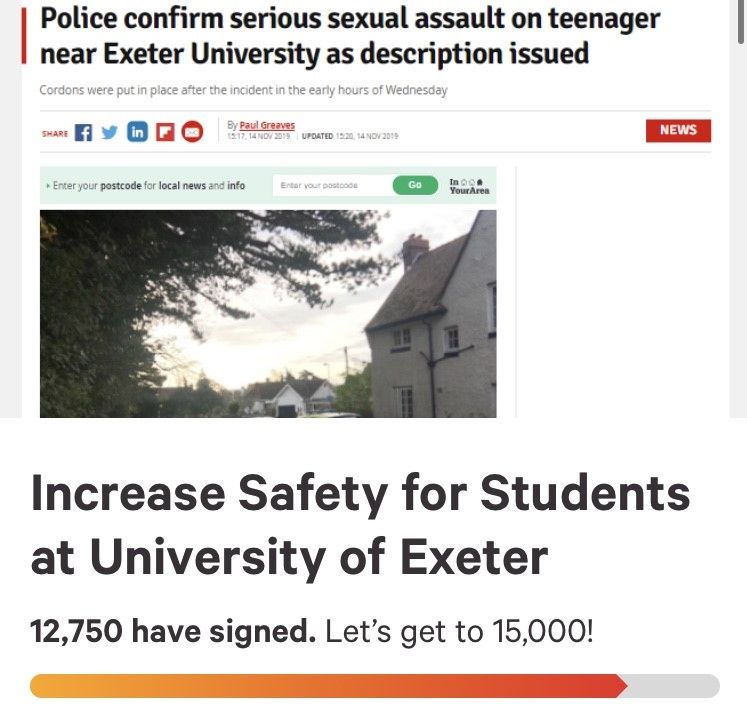 Millie and Izzy told The Exeter Tab: "We have been at uni together for almost three years now and as two girls who have always enjoyed Exeter’s nightlife we are all too aware of how scary and unsafe it can be walking home in the dark.

"We were sat in our bedroom chatting about how awful the recent incidents in Exeter are and half-joking we said “what if we made a petition?”.

"Once we started writing we realised how strongly we feel about student safety but we could never have imagined to receive the response that we have.

"The last two weeks have been so surreal, meeting senior management of the university has been an amazing opportunity and we’re so excited that we’re being listened to and real change is being implemented. We’re so grateful for the support we’ve received from students, the guild, and the university." 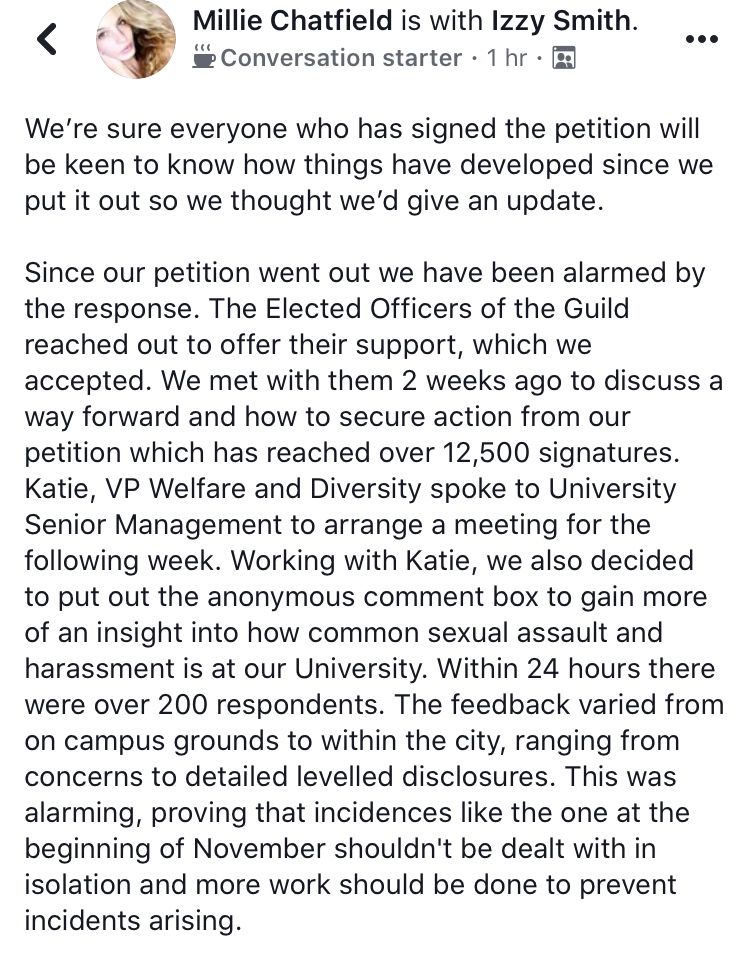 The Task and Finish group are addressing the following: the current transport infrastructure and best practice at other universities (including an investigation into a student safety bus), the safest routes home and how the University and council can promote these, lighting across campus and in the city, CCTV across campus and in the city, education/workshops around sexual harassment and assault, and welfare support for students affected by sexual harassment or assault.

In a post on the Facebook group Overheard at University of Exeter, third year Exercise and Sports Science student, Millie, writes: "the Task and Finish group is due to be completed by March in which the University will confirm the actions and implement those." 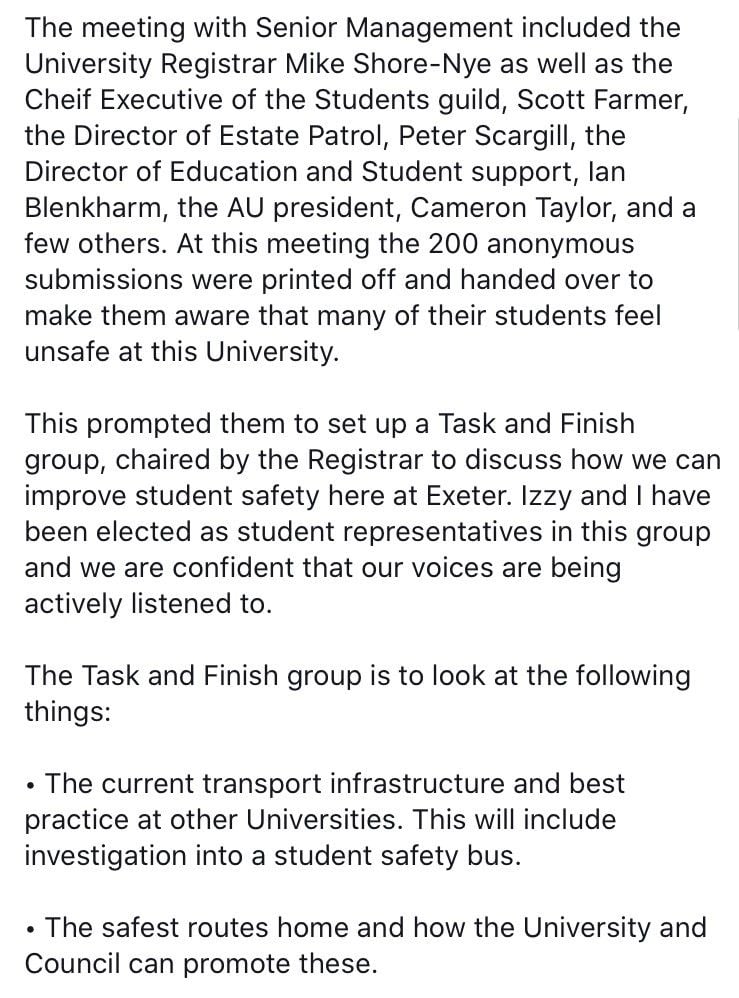 However the University are currently working on initiatives that can be implemented before Christmas.

These include: analysing anonymous submissions regarding sexual assault by students to spot trends and inform where safety precautions need to be put in place, cutting back foliage, working with students to produce consent and safety awareness videos, and increasing the presence of Police and Estate Patrol on campus. 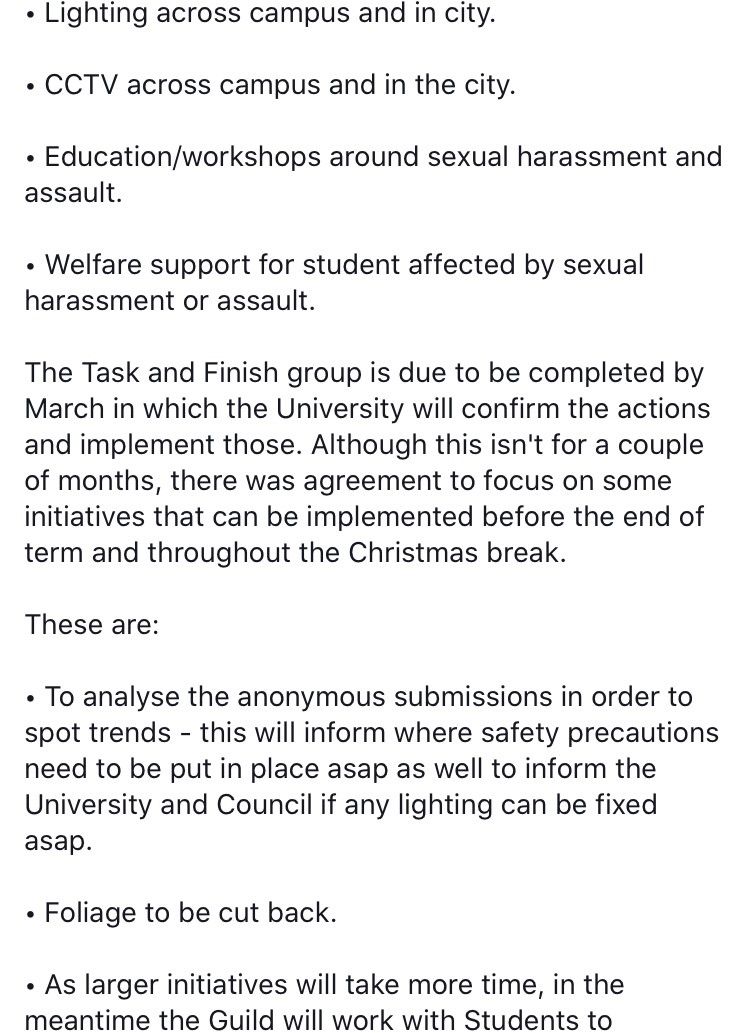 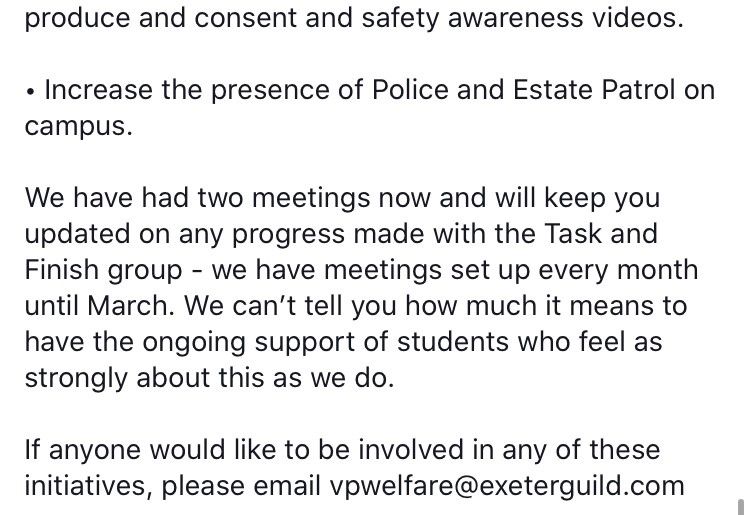 "We’re sure everyone who has signed the petition will be keen to know how things have developed since we put it out so we thought we’d give an update.

"Since our petition went out we have been alarmed by the response. The Elected Officers of the Guild reached out to offer their support, which we accepted. We met with them 2 weeks ago to discuss a way forward and how to secure action from our petition which has reached over 12,500 signatures.

"Katie, VP Welfare and Diversity spoke to University Senior Management to arrange a meeting for the following week. Working with Katie, we also decided to put out the anonymous comment box to gain more of an insight into how common sexual assault and harassment is at our University. Within 24 hours there were over 200 respondents. The feedback varied from on campus grounds to within the city, ranging from concerns to detailed levelled disclosures. This was alarming, proving that incidences like the one at the beginning of November shouldn't be dealt with in isolation and more work should be done to prevent incidents arising.

"The meeting with Senior Management included the University Registrar Mike Shore-Nye as well as the Cheif Executive of the Students guild, Scott Farmer, the Director of Estate Patrol, Peter Scargill, the Director of Education and Student support, Ian Blenkharm, the AU president, Cameron Taylor, and a few others. At this meeting the 200 anonymous submissions were printed off and handed over to make them aware that many of their students feel unsafe at this University.

"This prompted them to set up a Task and Finish group, chaired by the Registrar to discuss how we can improve student safety here at Exeter. Izzy and I have been elected as student representatives in this group and we are confident that our voices are being actively listened to.

"The Task and Finish group is to look at the following things:

"• The current transport infrastructure and best practice at other Universities. This will include investigation into a student safety bus.

"• The safest routes home and how the University and Council can promote these.

"• Lighting across campus and in city.

"• CCTV across campus and in the city.

"• Education/workshops around sexual harassment and assault.

"• Welfare support for student affected by sexual harassment or assault.

"The Task and Finish group is due to be completed by March in which the University will confirm the actions and implement those. Although this isn't for a couple of months, there was agreement to focus on some initiatives that can be implemented before the end of term and throughout the Christmas break.

"• To analyse the anonymous submissions in order to spot trends – this will inform where safety precautions need to be put in place asap as well to inform the University and Council if any lighting can be fixed asap.

"• As larger initiatives will take more time, in the meantime the Guild will work with Students to produce and consent and safety awareness videos.

"• Increase the presence of Police and Estate Patrol on campus.

"We have had two meetings now and will keep you updated on any progress made with the Task and Finish group – we have meetings set up every month until March. We can’t tell you how much it means to have the ongoing support of students who feel as strongly about this as we do."

• Over 3,000 sign petition for new safety measures in Exeter after sexual assault

• We asked Exeter students if they feel safe on campus, and here’s what they had to say