‘Operating an anonymous page is not the problem, posting racist content is’

Exeter University has accused the admins of ExeHonestly and Exefess of missing the point in deleting the original page and creating a replacement confession site.

This comes after confession site ExeHonestly was taken down following a series of racist posts, and a new page Exefess was created shortly after.

A University of Exeter spokesperson told The Exeter Tab: “The administrators of Exehonestly and Exefess seem to have missed the salient point. Opening and operating an anonymous Facebook page is not the problem. Posting racist and hateful content is the problem – and in the most recent incident a police matter." 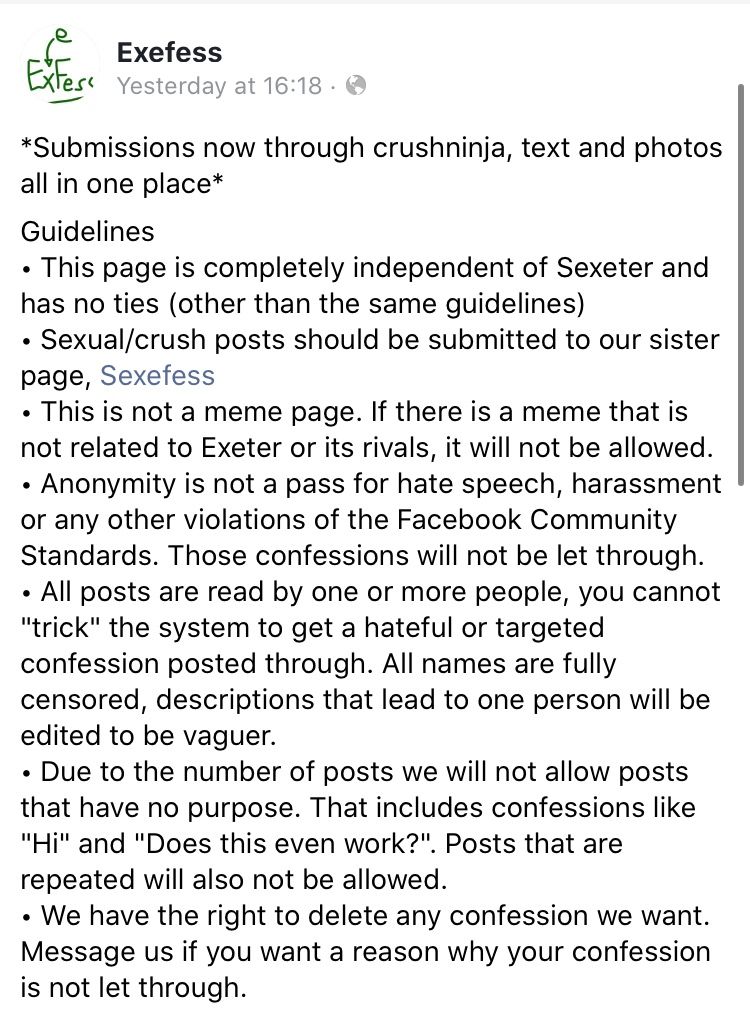 He added: “Their own guidelines state: ‘Anonymity is not a pass for hate speech, harassment or any other violations of the Facebook Community Standards. Those confessions will not be let through’. The administrators just need to follow their own guidelines to avoid investigation.

“Racism cannot be tolerated in any form in our community and if we obtain specific information about any of our students posting abusive or offensive content we will take immediate and appropriate action to ensure individuals are held accountable, including referrals to the police when required.”

Guidelines on the new site state that they are not affiliated with original confession pages ExeHonestly and Sexeter.

The University has escalated the accusations to the Police Hate Crime Unit.

One of the controversial posts published on ExeHonestly offered a bag of sweets to those who could answer the riddle: "What accounts for 13%, yet 52%?".

This is a combination of two white supremacist symbols. The first being 14, which is shorthand for the fourteen-word slogan "We must secure the existence of our people and a future for white children", coined by David Lane, a member of white supremacist terrorist group 'The Order'. The second is 88, which stands for "Heil Hitler"; H being the eighth letter of the alphabet.