Good Life has been forced to rename their “Tribal Dance” after Exeter students, including members of the University of Exeter’s Afro-Carribean Society, pointed out that it embodies “cultural appropriation”.

The word ‘tribe’ is contested as it first appeared in the colonial period.

However, this is not the first, nor the second, but the third time such a theme has been selected, and caused controversy.

First, back in 2012, Exeter’s notorious SSB was given the theme ‘Tribal’. This in turn caused Exeter Students for Social Justice to demand: “an apology and mandatory ‘Privilege Awareness Training’ for the organising committee”.

Then, last year a RAG event at Cavern was themed a “Tribal night”. The event page disappeared from Facebook and the issue was swiftly “resolved”.

The event this year is still going to happen, on Wednesday 29th March at the Phoenix, and is now called “Temple of Dance”. The Facebook event description has substituted the word “tribal” for “disco”. 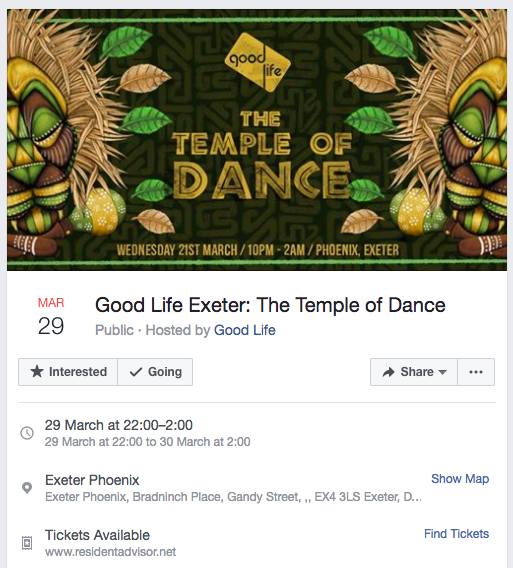 Elizabeth Burrell, a member of Exeter’s Afro-Carribean society, told Exeposé the event was: “for middle class white kids to dress up and ‘play’ ethnic, then go home and giggle. It is clear that ‘tribal’ here is used as a euphemism for “barbarian”, “African”, or “black”. And quite frankly it’s appalling. How can BME students feel comfortable in Exeter, when organisations put on events that alienate them?”

Matt McDonald, journalist and noted Exeter alumnus, told The Tab: “This is the third time in recent memory that a tribal-themed event in Exeter has been met with controversy and uproar. You’d have thought event planners at our embarrassingly white uni would have realised by now – especially as people are so much more sensitive than they were when this first happened.

“It’s pretty ironic that at such a fine academic institution, these people are not learning.”

Good Life has apologised for any offence caused.