The dad of an Exeter medic spent £10,000 on private investigators to hunt down the killer of his daughter’s pet cat – claiming police bungled the case.

Outraged Neil Tregarthen, 56, took action after his daughter Aylish’s moggy Farah had been shot by an air rifle.

Neil says he was was left furious after the police dropped the case through a lack of evidence. 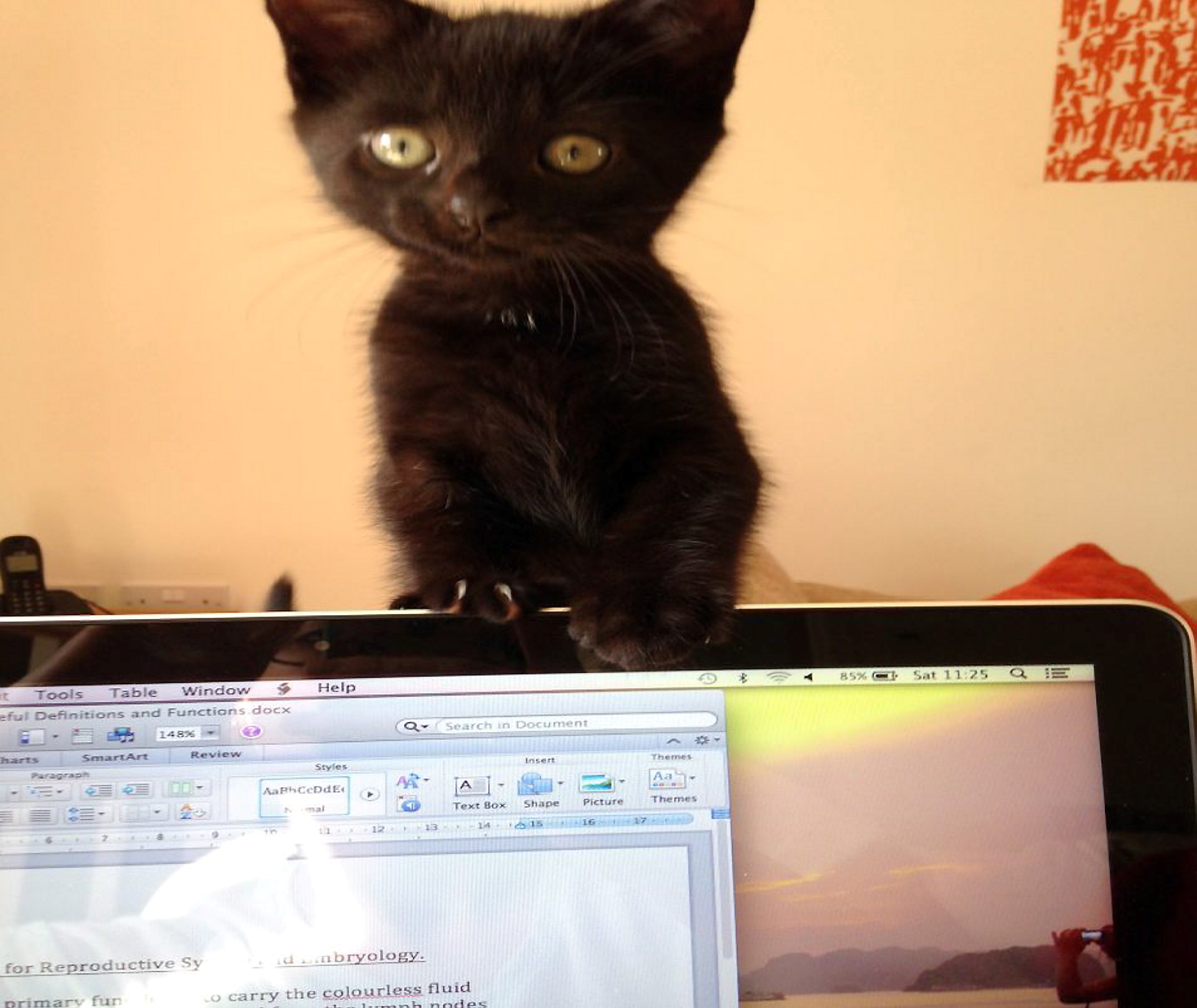 But the determined dad hired a firm of private investigators to track down the kitten killer – costing him a further £10,000. 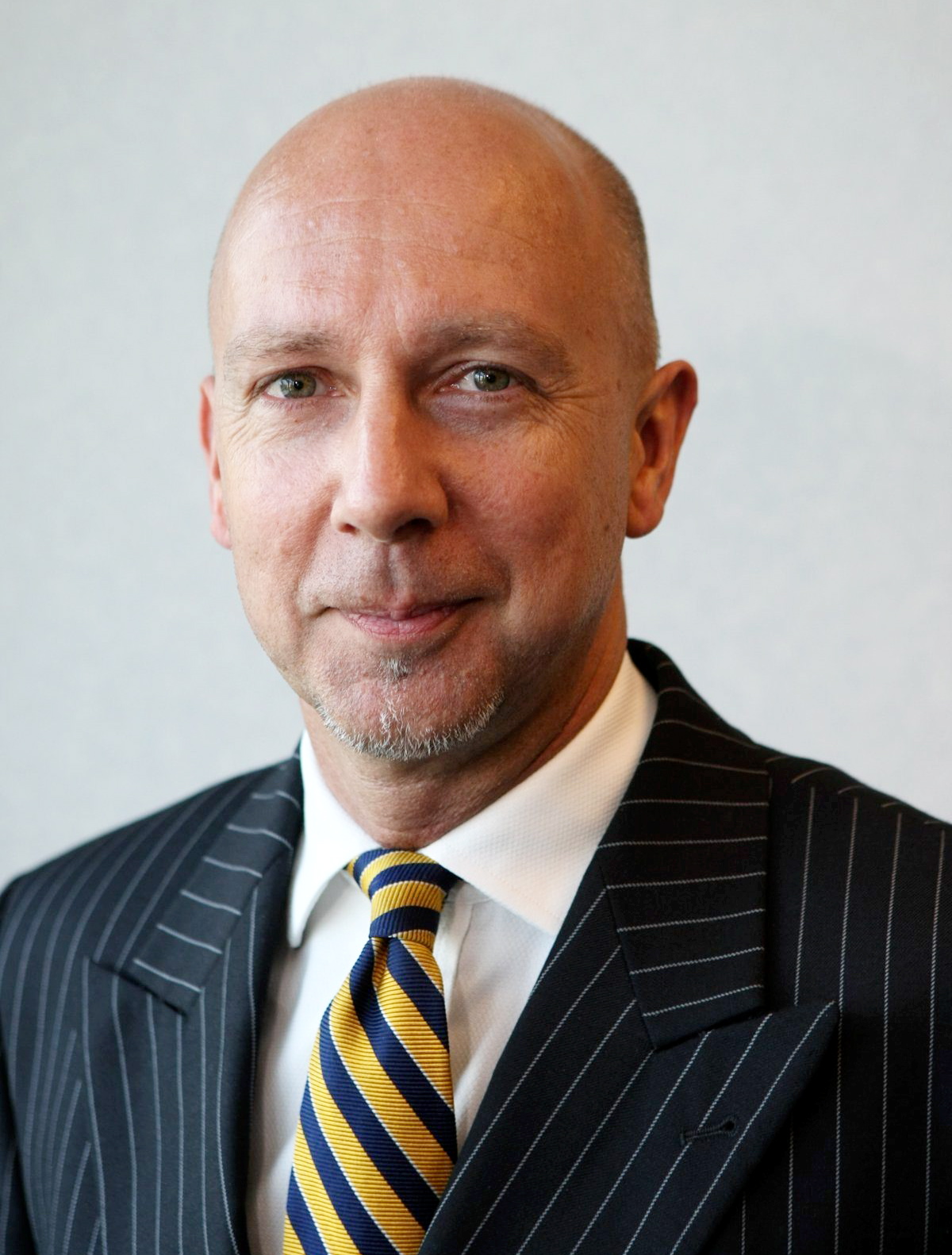 Neil, of Truro, Cornwall, decided to take the case on himself, and with the help of private investigators spent months collecting information and monitoring suspects incognito.

Unable to witness a crime in action, they instead collated all the information they had gathered, and presented it to the police for them to follow up the investigation through official channels.

Neil, a retired business owner, has now expressed his anger after police dismissed the report as being “full of rumour and speculation.

He was shocked by the police’s decision to abandon the case, despite the fact that most of the leg work had been done for them.

He said: “It was a terrible thing that happened, but it was more upsetting watching Farah die than anything else.

“She died of blood poisoning, and as a consequence had a very long, painful, lingering death.

“We found out quickly there had been a number of incidents with air rifles in the area where Farah would go, so we knew it was likely the culprit was out there – we just had to find out who it was.

“We hired an accredited private investigation firm, which was staffed by ex-police.

“We started with what everyone does at the start of an investigation – we raised awareness.

“We printed off flyers offering a reward for information, and put them up in the area.

“We also set up an anonymous phone line, for people to ring in with information.” 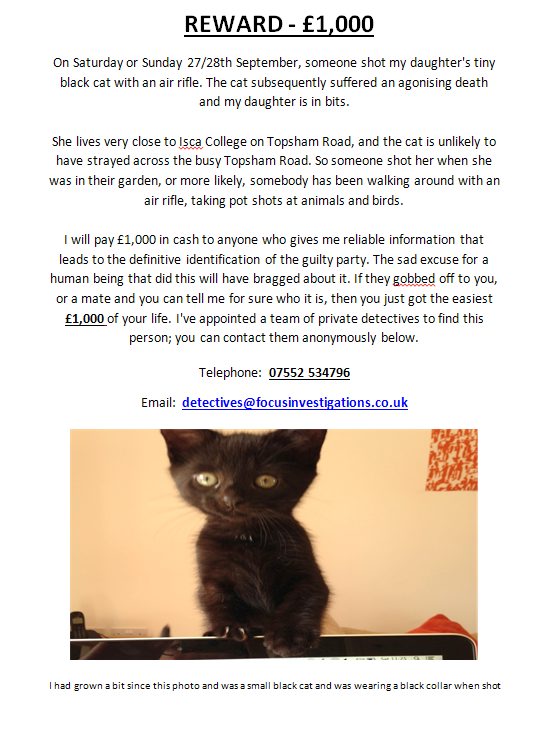 Sickened by the act Neil reported the incident to the police but was told by officers there was not enough evidence to pursue the case.

But Neil says they were inundated with phone calls from people offering information, which were then followed up by face-to-face interviews.

The interviews revealed a startling amount of similar information, which seemed to point the finger to a group of youths living in the area. 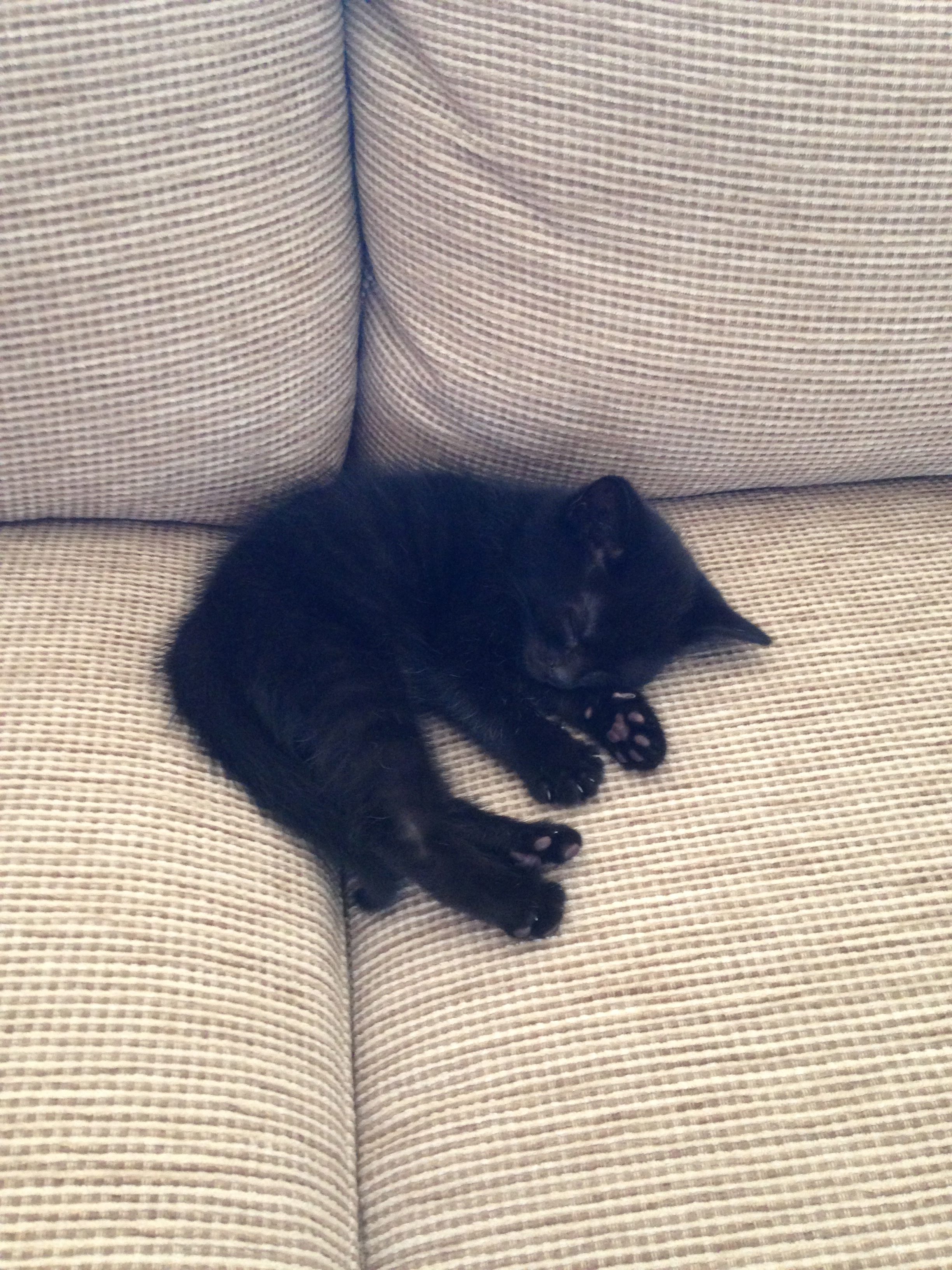 Several members of the group had criminal records of incidents with air rifles, and on their Facebook pages had posted photos and videos of them injuring animals, and guides on how to attack cows.

The private investigators then tried to track down the suspects, and would pose as members of the public in areas where they knew the youths frequented.

This included dressing up as fishermen.

Neil said: “We got no end of phone calls, and many of the interviews we conducted pointed out a similar set of circumstances.

“We narrowed it down to four youths so set about doing surveillance work. We would camp out on the river pretending to be fishing.

“We surveyed certain areas by pretending to be members of the public.

“Ideally we needed to witness an incident, but that never happened.

“We compiled all the information we had, and presented it to the police.

“The police said that the report was full of rumour and supposition, but the reality is that every police investigation will start with rumour, but you then build intelligence, which we did with this 15 page document.

“We needed the police to knock on doors and ask difficult questions.

“We did 85 per cent of the work, then Devon and Cornwall Police would not even go knock a couple of doors.

“The investigators may have cost around £10,000, but I would pay double that any day of the week if I thought it would stop this sort of behaviour.

“I know I am in a fortunate position to be able to do so, but I think it is money well spent. It is about society fighting back.” 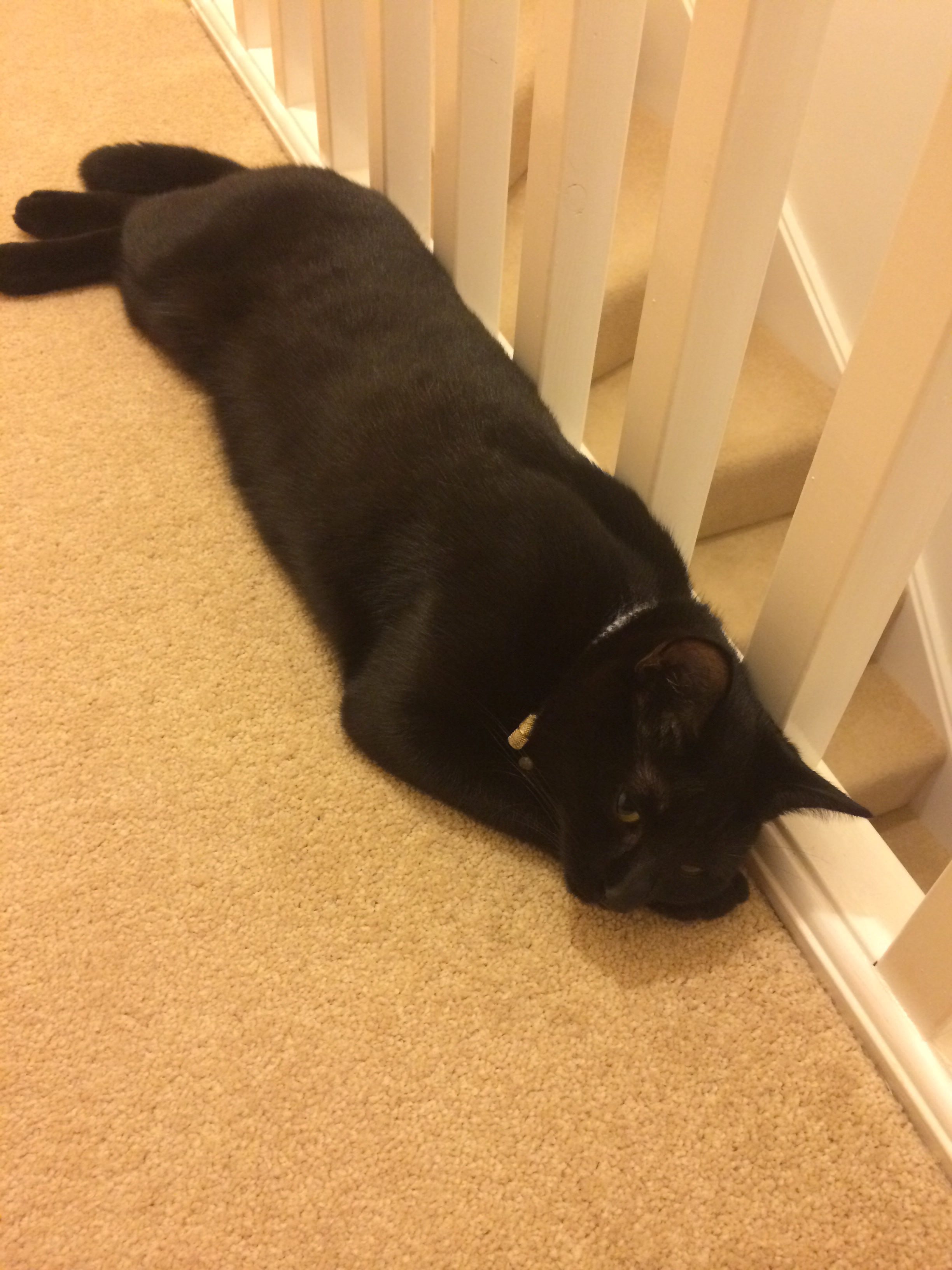 She would let him out of the house to explore but was shocked when one day Farah crawled home, and lay bleeding on the floor.

Releasing he had been shot, Aylish quickly called her father, and the pair rushed Farah to the vets but he died on the operating table.

She said: “It’s disappointing and very frustrating, I feel like there is no justification with not investigating something that is illegal.

“Now we have a lot of information to give them to aid them, but they’re still not willing to do an investigation.

“We sympathise with the budget cuts, they have limited time and resources, which is why we chose to investigate it. To still have the same response is very disappointing.

“I’d rather it had never have happened, I am grateful that I know what goes on in the area.

“It would have been very difficult for me to not know what happened and why it happened.

“Knowing what might have happened is difficult, but not knowing would have been worse. Now we can try to make a difference.”

Devon and Cornwall Police said in a statement they had investigated the original crime fully.

Neighbourhood beat manager Steve Parsons said: “I have examined the report and it is packed with rumour and speculation – not evidence.”