62 per cent of students have experienced assault personally 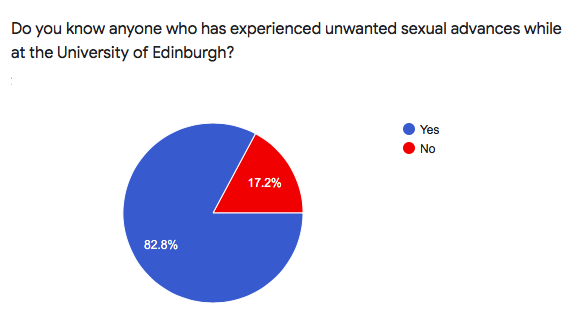 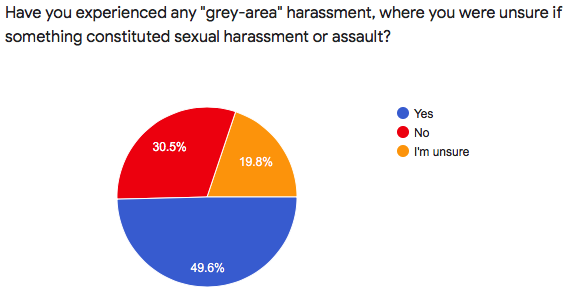 Half of students felt that what they had experienced could not fully be classed as sexual harassment or assault, with nearly 20 per cent saying they were even unsure if they had experienced grey-area harassment itself. These experiences range from unsolicited groping in clubs, being catcalled, and even being coerced into sex. Many of the incidences described mention alcohol and being drunk. Several respondents mention sex made non-consensual due to significant intoxication. One response said in reference to clubs: “Everyone is felt up, groped, and it’s assumed they like it.” 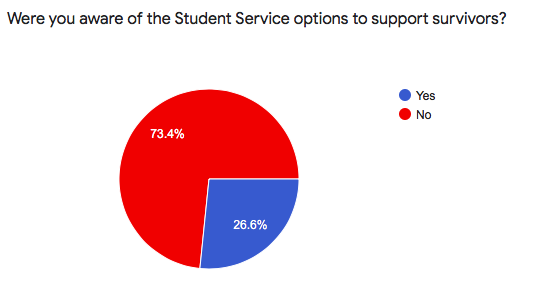 The vast majority of responses reveal most students weren’t even aware of the student service options for support with 89 per cent saying that they have in no way used University support.

Further, out of 10 per cent of students who said they did use student service options for support, 39 per cent said they found the services “poor”.

Of the 57.3 per cent of students who admitted to knowing a perpetrator of sexual assault, the majority of responses claimed that no disciplinary action was taken. One response elaborated: “They didn’t receive any disciplinary action. If I report them, I won’t be anonymous. If I am to report them anonymously, then it won’t be flagged to the student. It’s a flawed system.”

Where do we go from here?

The University told The Tab Edinburgh in a statement:

“The University does not tolerate sexual violence within its community, and takes any reports very seriously.

“Significant investment has been directed to help us achieve these aims. This includes the recent appointment of a Sexual Violence and Harassment Liaison Manager, who will provide support for survivors of sexual violence and harassment, as well as overseeing the new ‘Report & Support’ platform, which will make it easier to report such  incidents.

“We are working with a wide range of groups across Edinburgh to tackle sexual violence. We are part of the ‘Fearless Edinburgh’ partnership, which brings together Edinburgh College, Police Scotland and the NHS. We are also working with frontline support groups such as Edinburgh Rape Crisis Centre, and funding more support for survivors through them.

“A range of confidential help and support is available for anyone affected, with the Students’ Association Advice Place providing frontline support for those who have experienced sexual violence, harassment or assault.”

Forget Hinge and Bumble, Edinburgh Goes Dating is back and better than ever