The occupation of Appleton Tower has ended

The occupation of Appleton Tower has officially ended as activists retreated from the building late on Saturday night.

Appleton Tower had been occupied since Wednesday morning, preventing lectures and tutorials from taking place.

The end of the occupation comes following significant backlash from informatics students, as well as from student across the entire university, about the disruption it caused to their coursework.

In a statement posted today, Staff-Student Solidarity Network Edinburgh, the group behind the occupation, said: “As anticipated, many students were inconvenienced by the occupation’s impact on coursework, and we greatly appreciate the patience and support of the tower’s usual occupants. We were very disappointed by a vocal minority who lashed out at the occupiers, and were not receptive to our attempts to open discussions and meet their needs.

“This was not representative of the majority of the students, many of whom took time to meet with us and attempt to reach common ground. We have had constructive interactions with students and staff and hope to build on the relationships we have created in the future and that we can further recognise their specific interests in our ongoing fight against profit-focused university structures.”

Appleton tower is OCCUPIED in solidarity with striking staff! More updates soon.Lectures are cancelled. Informatics students are free to use their equipment. Don't go to class!

Staff-Student Solidarity Network Edinburgh stress that their occupation was in support of UCU’s demands for pay equality, job security, manageable workloads, and an end to pay devaluation (including pensions), as well as their own demand to “end to the hostile environment on campus”.

Whilst public opinion amongst Edinburgh students has been overwhelmingly in favour and supportive of the UCU strikes, the on-campus response to the occupation was largely negative. Despite activists running the building as an “open occupation”, meaning students were free to enter and leave as they pleased, strong backlash came from informatics and other STEM students who needed both access to their labs and teaching time to complete crucial coursework.

A poll conducted on The Edinburgh Tab’s Instagram page found 77 per cent of respondents (at time of writing) did not support the occupation. 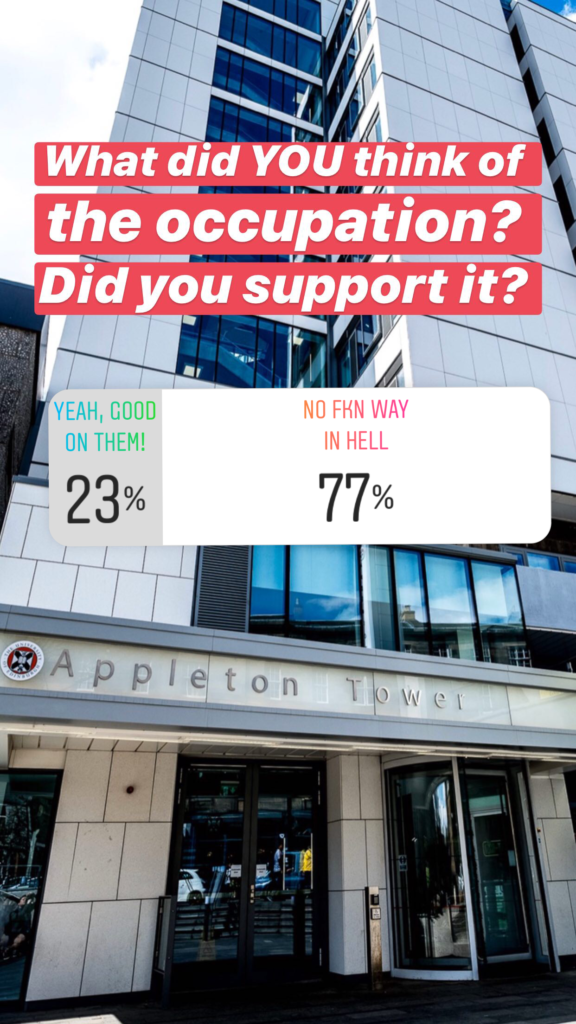 Posted by Edifess on Saturday, 29 February 2020

On day two of the occupation, student journalists with The Edinburgh Tab took a look around Appleton Tower. Inside we heard a heated conversation between a group of occupiers and a representative of Edinburgh University. The conversation was focussed around the cleanliness and fire safety of the building – with the students seeming to imply they would be willing to remove barricades by Monday to allow essential cleaning and maintenance staff in the building.

The Edinburgh University representative reasserted several times just how much of a fire risk the occupation was creating due to the age of the building, amount of electronics inside it and the barricades blocking emergency exits.

We also spoke to some tech professionals who hire out computer labs on the eighth floor of the building for private business work. They were very concerned about the health and safety risks posed by the occupation, and though they were grateful to be allowed into the building in the first place, they told us they found the occupation created a “hostile” and “awkward” environment in the tower.