She claims the racist language used was ‘pop culture’ appreciation

A white fourth year female student at Edinburgh University has been widely condemned for sharing a selfie on her Instagram story accompanied by a racial slur.

The photo, which was uploaded on Friday night, was captioned with a tag of the student's boyfriend, followed by the words "y u hiding lil n****".

The image has been described by Edinburgh University's African Caribbean Society as "harmfully far-reaching" and a display of "carelessness of the individual in question when it comes to using derogatory language."

The student claims she used the racial slur in a "pop culture" sense. 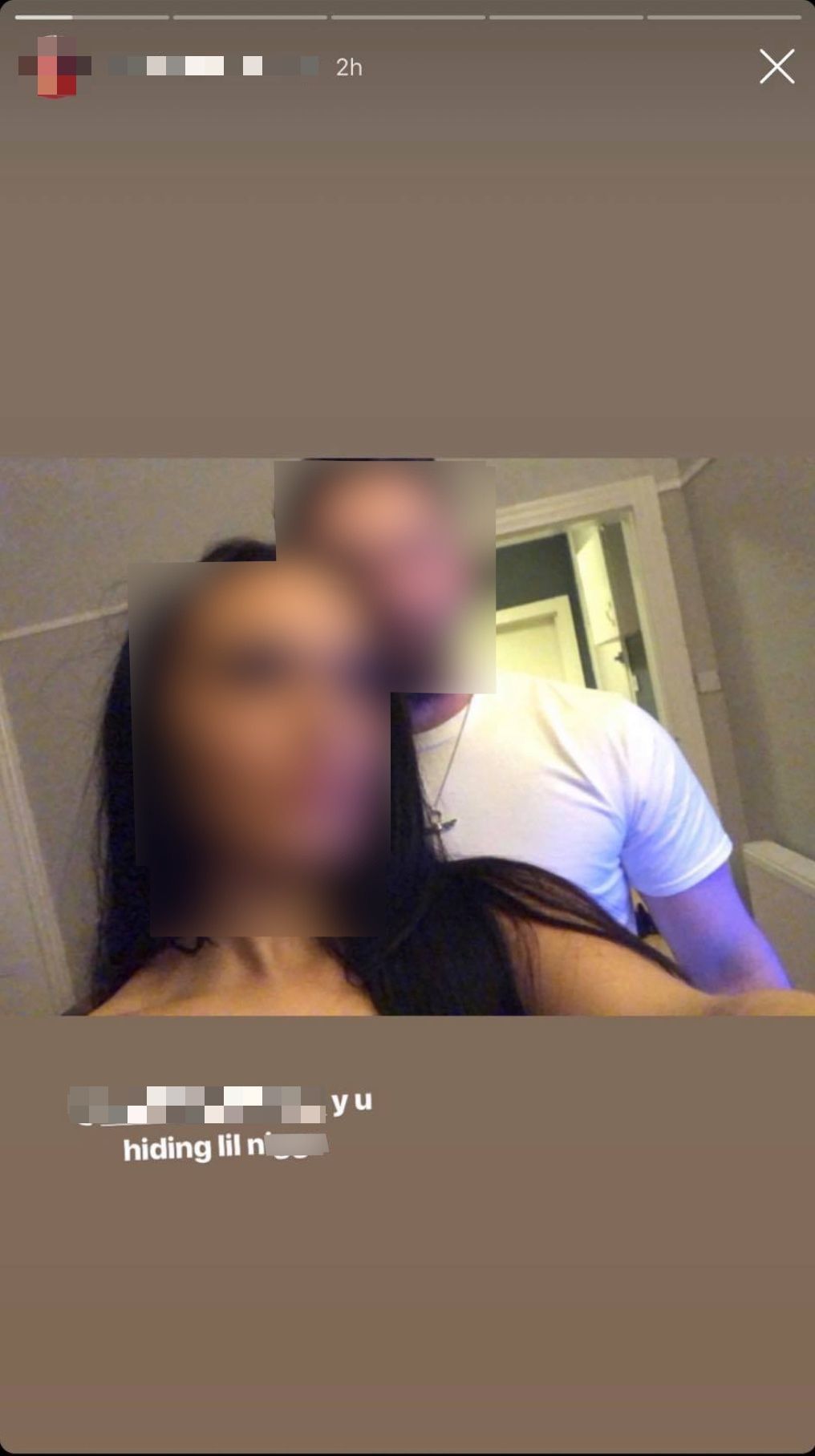 The Instagram story was deleted after four hours, but its effects, particularly for minority students, transcended across the university.

One student, who posted a screenshot of the image on Edinburgh University's Black and Minority Ethnic Facebook group, told The Edinburgh Tab: "This is not a question of hurt feelings or censorship, but rather the fact that Edinburgh University is a place for educating the next generation of leaders in Scotland and beyond, and this type of racist ignorance maintains historical norms that we are trying to leave behind.

"So this goes way way way deeper than a non-black person saying the n-word. Black people are directly harmed but non-black people should also find it unacceptable because it's antithetical to the society we are trying to build.

"What’s worse is that she chose not to engage with black colleagues who questioned her about it. She blocked them and chose to defend herself to a white mutual friend which adds to the culture of silencing black women.

"Although she said she meant no offence, we all know that the n-word is a special case where no intention is needed. It's one of those things where the effect is inherent in the word and everyone knows this, so let's not pretend otherwise." 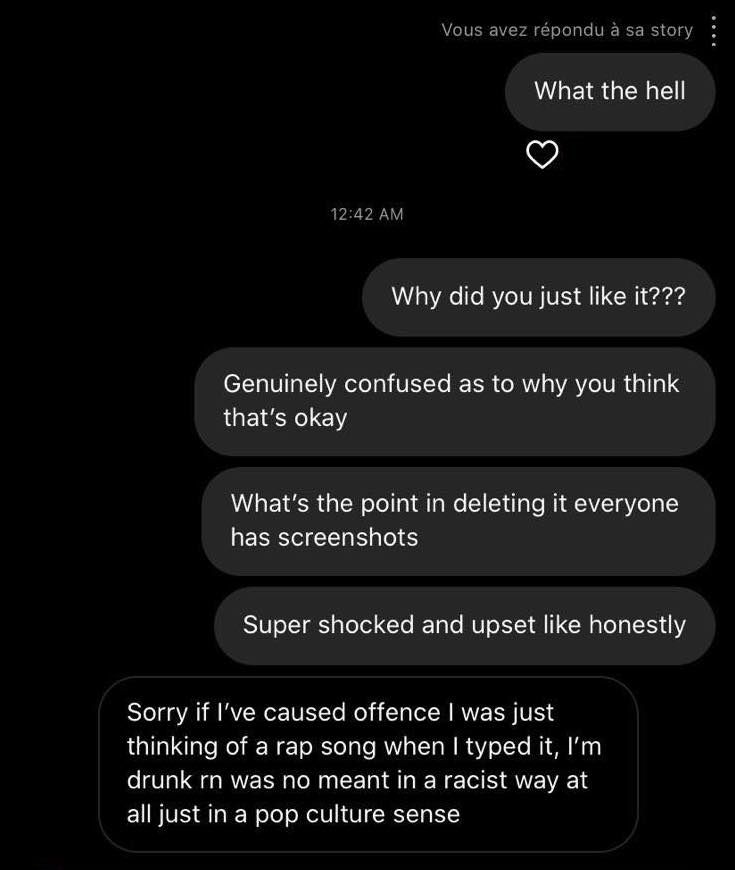 A group of students will be bringing the image to the attention of Edinburgh University on Monday.

The student in question told The Edinburgh Tab: "I apologised to the person who messaged me and said sorry and that what I posted was not meant in an offensive way at all.

"I won’t use that word again since it has clearly upset and offended people, there was no malicious intent and what I meant by “pop culture” was not that these words were to be taken lightly but that it is words frequently used in rap music/culture – I did not mean to offend anyone. I will not be using this terminology again. I did not aim or try to victimise anyone by this post.

"The Insta post was of me and my boyfriend at pre-drinks before going on a night out and the caption was not meant to offend anyone."

Unfortunately, it has been brought to our attention that a student at the university posted a picture to her instagram…

Edinburgh University's African Caribbean Society posted on Facebook: "Unfortunately, it has been brought to our attention that a student at the university posted a picture to her instagram with a caption containing a very derogatory term.

"While we are conscious that this was posted on her private social media platform (i.e. not said verbally at any university location) we still feel that its effects are harmfully far-reaching; and if nothing else, display the carelessness of the individual in question when it comes to using derogatory language. We’d like to state first and foremost that this is NOT an attack on the particular individual, but rather this is us as a society highlighting and educating others on the dangers of problematic behaviours as a whole- we have no ill regard towards the person.

"It is disheartening that people still feel entitled and justified to use such derogatory language colloquially as if they are mere throw away words all in the sake of “banter”. Too often BAME students (and, as in this specific case, Black students) are at the butt of this never-ending ‘joke’ and frankly comments like these display a high level of ignorance and at best just recklessness – which often stems out of a privilege they don’t care to admit or address .

"ACS, as well as other BAME communities at this university, exist to create a safe space for all POC and BAME individuals, to celebrate our respective cultures, and to give a voice to our collective struggles as well as our achievements. Incidents like these go a long way to damage all of the progressive feats we have worked hard to achieve.

"One thing we can say at least is that such incidents should force the university to admit that racist and discriminatory behaviour are cropping into the culture here and these aren’t just isolated occurrences. It really shouldn’t take a group of BAME students being (rightfully) outraged and frustrated at this obviously offensive slur for it to be taken seriously. The University should show itself as a true ally of POC and BAME students (who study here and otherwise) by first condemning this behaviour, educating the culprits (and wider university), and working together with the BME campaign, ACS, and other likeminded groups to put forward effective initiatives that will get to the root of the problem.

"Here at ACS, we are always ready to extend a hand to those who want to be REAL allies and work together in partnership to build a better university for all students. ACS has respectfully decided to decline commenting on any articles about this issue because we want to address our members directly on our own social media platforms where our message, in its entirety, will be conveyed just as we intend."

A spokesman for the University of Edinburgh said: "We take any allegation of racism involving our students extremely seriously and we will be investigating this incident.

"We encourage all our students to think carefully about how they use social media and to do so in a mature and responsible manner."