An anonymous post on the Facebook page Edifess has sparked outrage for urging Chinese students to "be more proud of your actual names" and suggesting that using "real names" is "so much better than replacing them".

Over 40 students, many of whom have English and Asian names, have responded to the post, with most arguing against its premise, and one commenter labelling it outright "condescending". 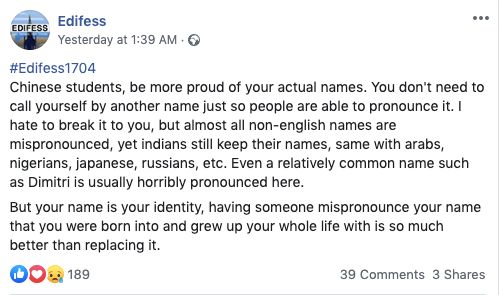 The post reads: "Chinese students, be more proud of your actual names. You don't need to call yourself by another name just so people are able to pronounce it. I hate to break it to you, but almost all non-english names are mispronounced, yet Indians still keep their names, same with Arabs, Nigerians, Japanese, Russians, etc. Even a relatively common name such as Dimitri is usually horribly pronounced here.

"But your name is your identity, having someone mispronounce your name that you were born into and grew up your whole life with is so much better than replacing it."

One student, Hannah Nguyen, responded: "Says the guy who put this in an anonymous confession. Have you ever considered practicality? It's hard to recognise that someone's calling for you when the consonant in your name doesn't even exist in the English language."

Another student, Violet Wong, said: "Addressing people the way they want you to not the way you want to is a sign of respect, Chinese or not." 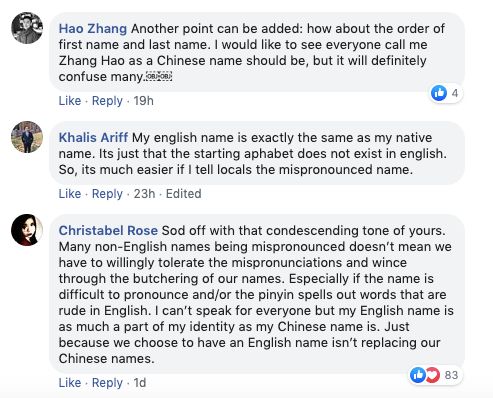 Christabel Rose, whose comment received 83 likes, described the post as "condescending" and replied: "Many non-English names being mispronounced doesn’t mean we have to willingly tolerate the mispronunciations and wince through the butchering of our names.

"Especially if the name is difficult to pronounce and/or the pinyin spells out words that are rude in English. I can’t speak for everyone but my English name is as much a part of my identity as my Chinese name is. Just because we choose to have an English name isn’t replacing our Chinese names."

Commenting on the Edifess post, President of Edinburgh University Hong Kong International Society, Janice Wong, told The Edinburgh Tab: "Hong Kong is a business hub that connects the east and west and is culturally and ethnically diverse.

"I would say that the international environment has led to certain practices that help with daily communication and business opportunities, therefore some people might have English names and some might not, but its definitely a defining characteristic of HK people, and does not mean that we are not proud of our names."

Edifess state on their page that "opinions expressed in submissions are those of the author and do not necessarily reflect the views of the admin team."