A scientific analysis of the nightclubs of Edinburgh, as told by TripAdvisor

“After Hive… I was reborn – this is my story”

With the Edinburgh Fringe just around the corner, and the arrival of the next bunch of flared-up uni freshers shortly after, it seemed a very fitting time to provide a run-down of the crème de la crème of Edinburgh's nightclubs.

Whether you're looking for a night spent dancing away to music as cheesy as a rancid Roquefort, or a evening of bass louder than the engine of Daddy's old Harley, Edinburgh has a club for you. But don't just take our word for it. Look no further than the highly scientific and completely trustworthy world of TripAdvisor reviews to find the venue that's your type on paper.

Ah, the patron saint of Scottish nightclubs. The famous venue that first opened in 1997 boasts an impressive history of awards, and even won Best Nightclub at the Scottish Entertainment and Hospitality Awards 2019. Surely its TripAdvisor reviews would be just as dazzling?

"What do you fucking want?" Welcome to Scotland, Clarence.

By the sound of things, Clive was still drunk at the time of writing this. He 'made' a 'Club exp.' without even having a 'Loungr'. Remarkable. Nonetheless, Clive's review may win you over if you're all about 'connecting to lots of people' on a night out.

The mention of Hive will either have you reaching for the anti-bac or standing at self-checkout purchasing own brand vodka for pres within 5 seconds. This one's definitely the Marmite of the Edinburgh club scene, and the 177 reviews on TripAdvisor are testament to Hive's love-or-hate vibe.

This was a whirlwind of a review. Be sure to 'Hive till Five' if you're looking to be 'reborn'…

Turns out we weren't ready for this review either. 'If Hive was a person it would get pumped'. Are Hive's visitors as weird as their reviews?

DnB hotspot Bongo's is the place for you if a serious case of tinnitus is what you're looking to gain from a club night.

'I love The Bongo Club <3' definitely sounds like a leopard print-covered, bucket hat-wearing yah who's trying a little too hard to break her Head Girl of St Mary's Ascot image. Nonetheles, we'll take your word for it, Poppy.

The heart and soul of the city centre, some would argue. However, poor old Gazza's TripAdvisor page was a mixed bag.

Alexandra will defintiely be a "I want to speak to the manager" mom when she grows up. 'Caroline' may be a tune, but it won't ever justify her giving Garibaldi's that 1-star rating. Fake news.

Not to be biased, but Justine definitely promotes for Cab Vol. Enough with this bullying, Garibaldi did not unify Italy to put up with this shit.

With queues that last longer than the duration of your degree and potentially the tiniest smoking area in the capital, it may come as a surprise that La Belle is undoubtedly one of Edi's finest. Let's see what the beautiful people of TripAdvisor had to say…

Adrian appears to choose which clubs to hit up on a basis of toilet cleanliness. La Belle's clubs 'seem' to be cleaned regularly and honestly what more could one look for in a night out.

Gosh, La Belle frecuenters are worryingly concerned about their club toilets. Ayla descibes La Belle's loos as 'different', and comments that they 'fit the feel of the place'. Who doesn't love going to a club that matches the feng shui of its toilets? I, for one, am sold.

One of Edinburgh's smaller clubs, Sneakys is the place for live music and intimate gigs. It's hot, it's sweaty, and has a creepy name, but the 100-man capacity venue is certainly never short of clubbers.

A place where 'no one can see your lame shapes'. Anyone else feel nauseous?

Last but certainly not least we have student favourite The Three Sisters. If you can remember even part of your night here, let alone recollect enough in order to leave a review, you're doing it wrong. Let's take a look at what TripAdvisor had to say. 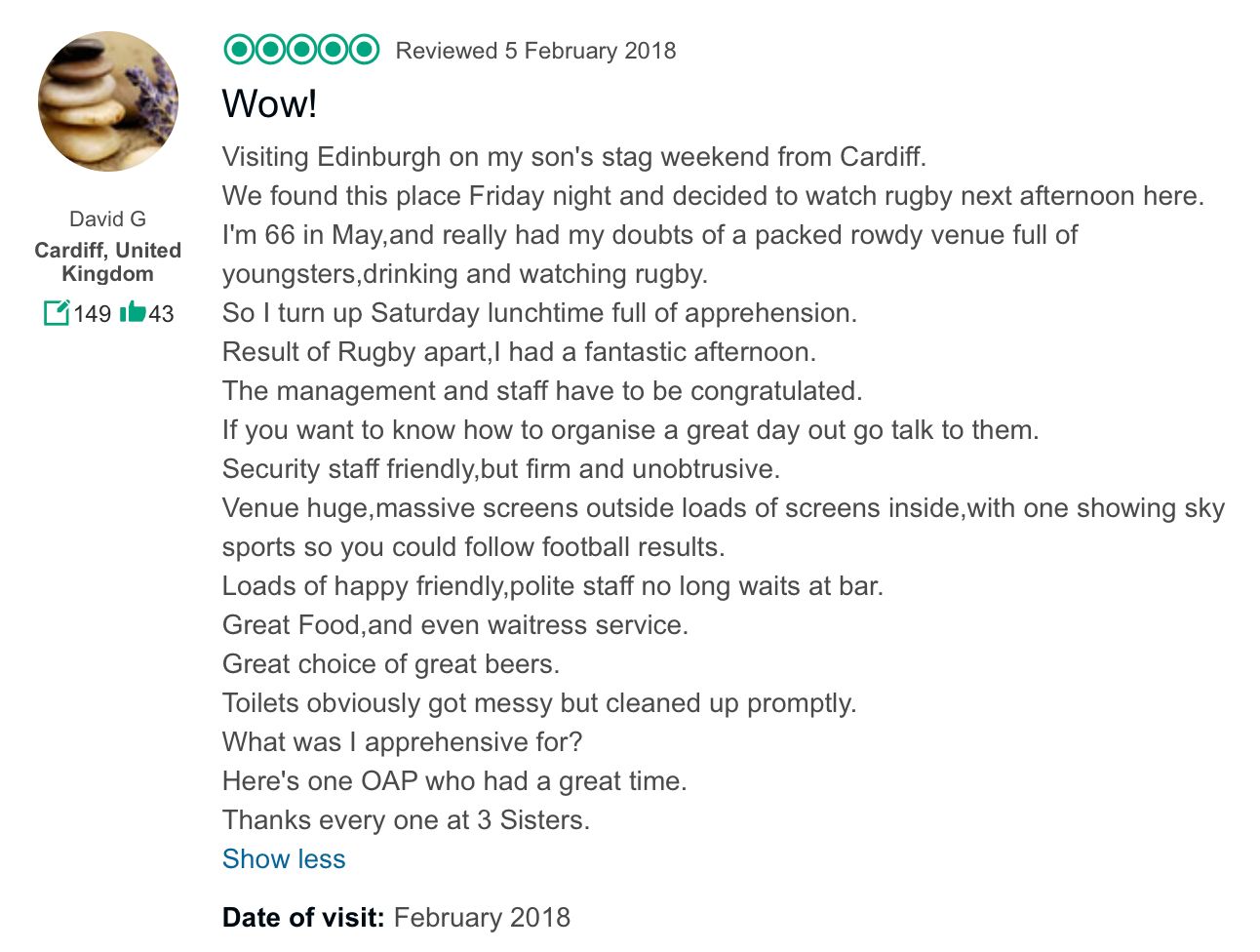 Rupi Kaur better watch her back with reviews like this on the scene. OAP David G, we stan.