“We really are getting too deep into the anatomy of Lagomorpha”

Arguably the University accommodation’s biggest name on campus, and the hallmark of all things perfectly pretentious in Pollock Halls, Oscar de la Rabbit has been residing periodically – as a matter of his protection – in Pollock since September 2017.

Known to, and loved by, the majority of his fellow residents, yet only having recently come into the knowledge of the accommodation staff, the myths and legends surrounding Oscar and his whereabouts are numerous.

We reached out to his anonymous owner in order to separate the fallacies and facts surrounding Pollock Halls’ most mysterious yet loveable resident.

Disclaimer: this interview was conducted through ‘sliding into the DMs’ of Oscar’s personal Instagram page and a telephone call in order to preserve both his doting owner’s identity and Oscar’s own personal security. 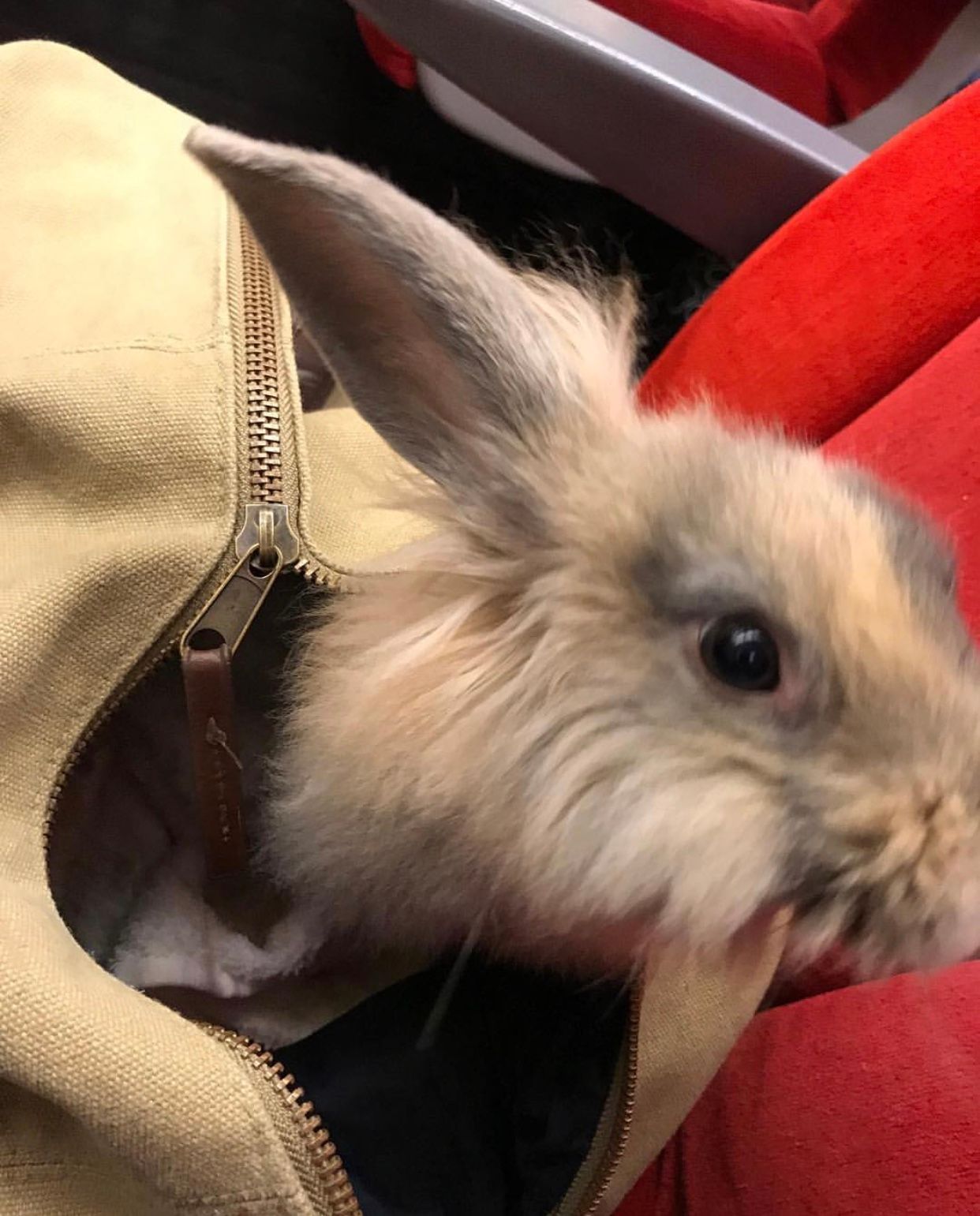 Pictured here on a train, one can only hope his carrier is Oscar de la Renta

How did Oscar end up in Pollock Halls?

There is much mythology surrounding Oscar’s origins and each story I hear from someone else who doesn’t know who I am, is more fantastic. I would quite like to keep it that way. However, what I can say is that he was here for much of Freshers' Week.

Did you keep him in a cage?

No – he’s litter-trained, so he lives in the room and he goes to the loo in a box and he has some hay that he beds in. The only problem is that he has recently taken to getting into my bed. What I have gathered is that if you were single, having a rabbit would genuinely work in your favour, however, if you’re in a relationship and you have a rabbit it’s a bit if a cock-block. A small, fluffy, quadruped ruminant in your bed is not the best pretext for some things.

How do you keep your room smelling fresh when its full of hay?

Well it’s not full of hay; he beds in a box. I occasionally find a stray piece of hay here and there but I just pick it up and put it back. To be honest, some of the shit people that people tread in from Cowgate from the bottom of their shoe is a lot worse than hay.

How do you keep Oscar hidden from the cleaners?

The official line is that he or she has no idea, and I think we will leave it at that.

When did people first find out about Oscar’s residence in Pollock Halls?

It was public knowledge from the very start which is actually quite astounding. It is testament to the fact how very little RAs and wardens actually do. They didn’t come to know of it until, I think, late November, or, if they did know before, they were certainly very slow about trying to sort it out. The warden conducted one of the most haphazard, cap in hand, and genuinely ineffectual investigations I have ever seen. It was based upon emailing everyone who followed the Instagram account without actually considering to look at to who’s Facebook it was connected. I have since disconnected it, and made the account private. And, of course, thankfully, I could count on the strong moral convictions of the residents of my accommodation block – and a bizarre code of First Year omertà that they didn't sneak on me, which is rather nice.

Have any situations arisen in which Oscar has been close to being caught?

I had the head of the domestic staff knock once and ask to come in, and I just simply asked her to come back later, because, at the end of the day, you are in a normal tenancy relationship here, which means you do not have to let someone into your room when they knock, regardless of their position at the University. They must give you twenty-four hours notice and providing that is given I am more than happy to let them in. 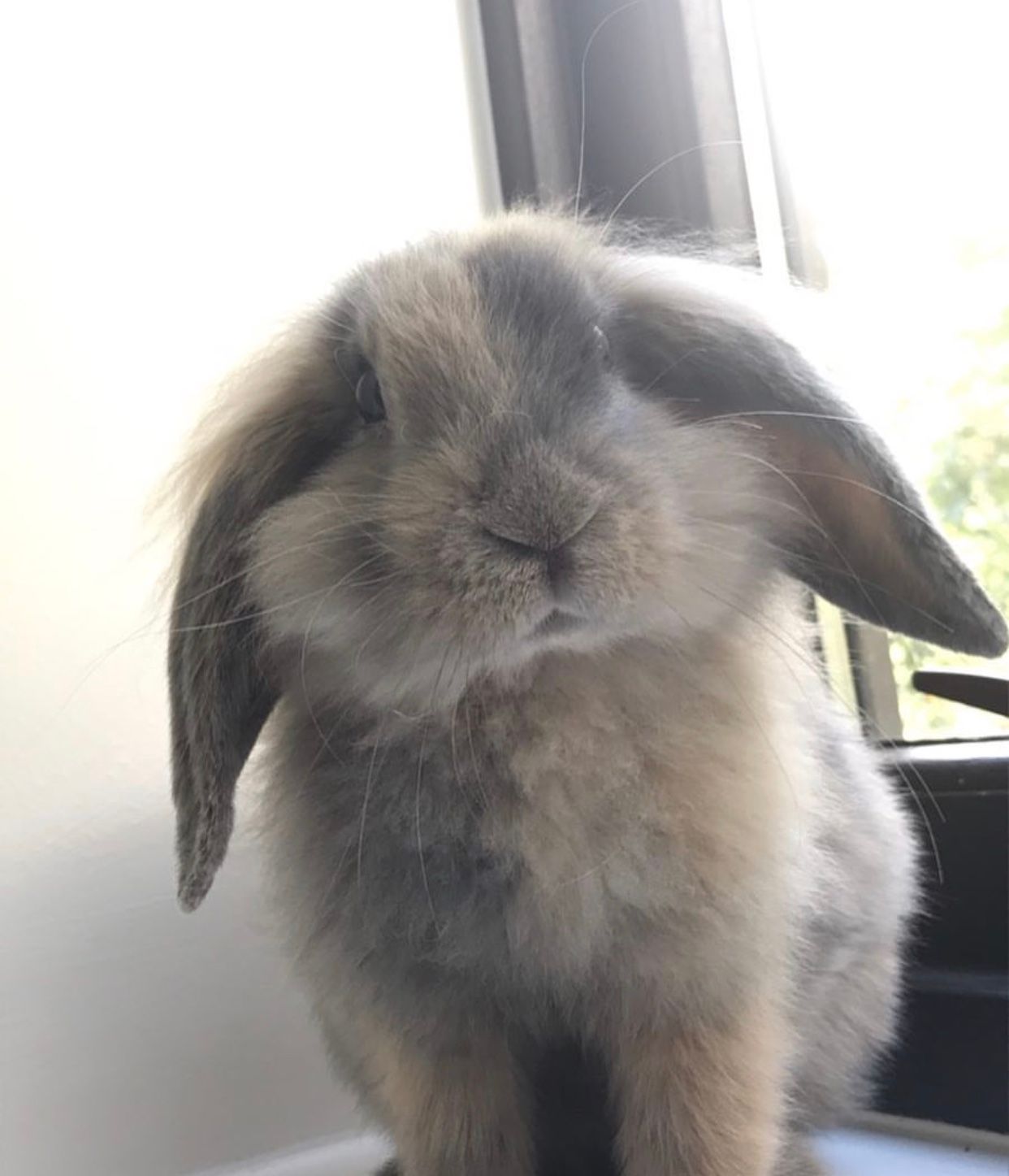 The best looking fresher in Pollock? Without a doubt

Where is Oscar currently residing?

We have a family flat in the New Town – and his residence, be it here or there, depends entirely on the month, the week, the day etc. He has also been all over Pollock Halls on visits to Holland, Grant, Turner…

How do you keep him hidden when transporting him in between the Houses?

I have a Barbour so I just put him in the poacher's pocket of that. I suppose the hardest part is trying to find a suitable flat for next year – I would quite like one with a garden for him. That’s another thing actually, a lot of people think it’s cruel to keep a rabbit inside, but it is completely fine for certain rabbits to live indoors. A rabbit hutch in the garden is significantly smaller than my room in Pollock, and I deliberately don’t keep stuff on the floor to allow him more room to run around.

What is his diet comprised of? Hopefully not the JMCC (the rather lacklustre canteen at Pollock Halls)

Well, we used to steal food from the JMCC. He does have to eat real food; sometimes he eats things as a treat – he loves ice cream and he really likes bananas.

But you have to be careful because that sort of food is really bad for him. It is mostly hay and pellets that he feeds on. You would be surprised – actually – the healthy amount of food recommended for a rabbit is really not that much. Most people significantly overfeed their rabbits – in reality, they are ruminants, so are supposed to constantly eat to keep things moving through their system as opposed to eating one large meal – their digestive system isn’t the same as ours. But we really are getting too deep into the anatomy of Lagomorpha. 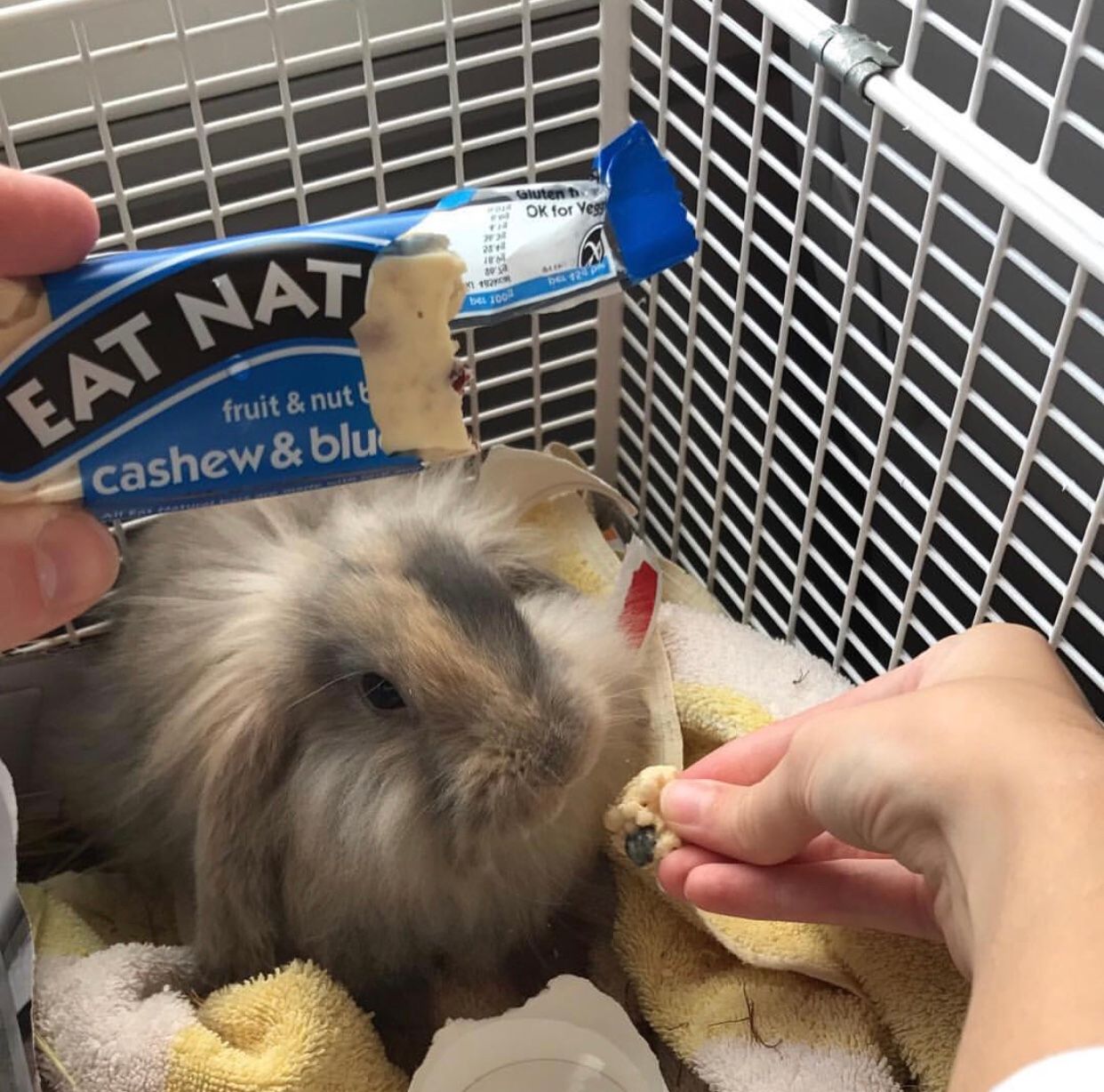 And what about his daily exercise routine – do you take him on walks?

We do have a lead for him, and have walked him around the top of Salisbury Crags. He has gone to the pub, but on quite a quiet evening – with too many people it would be too noisy for him – and in London he has been to Duke on the Green.

And so he has crossed the border to the South?

Oh yes, he loves the train. He just sits on the seat next to me – not in a cage – as he is very well-behaved – and quite smart actually, and is able to open things. I remember I had a lot of rabbits as a child, and none of them were able to do that, so that is quite impressive. He is definitely a high-functioning rabbit. 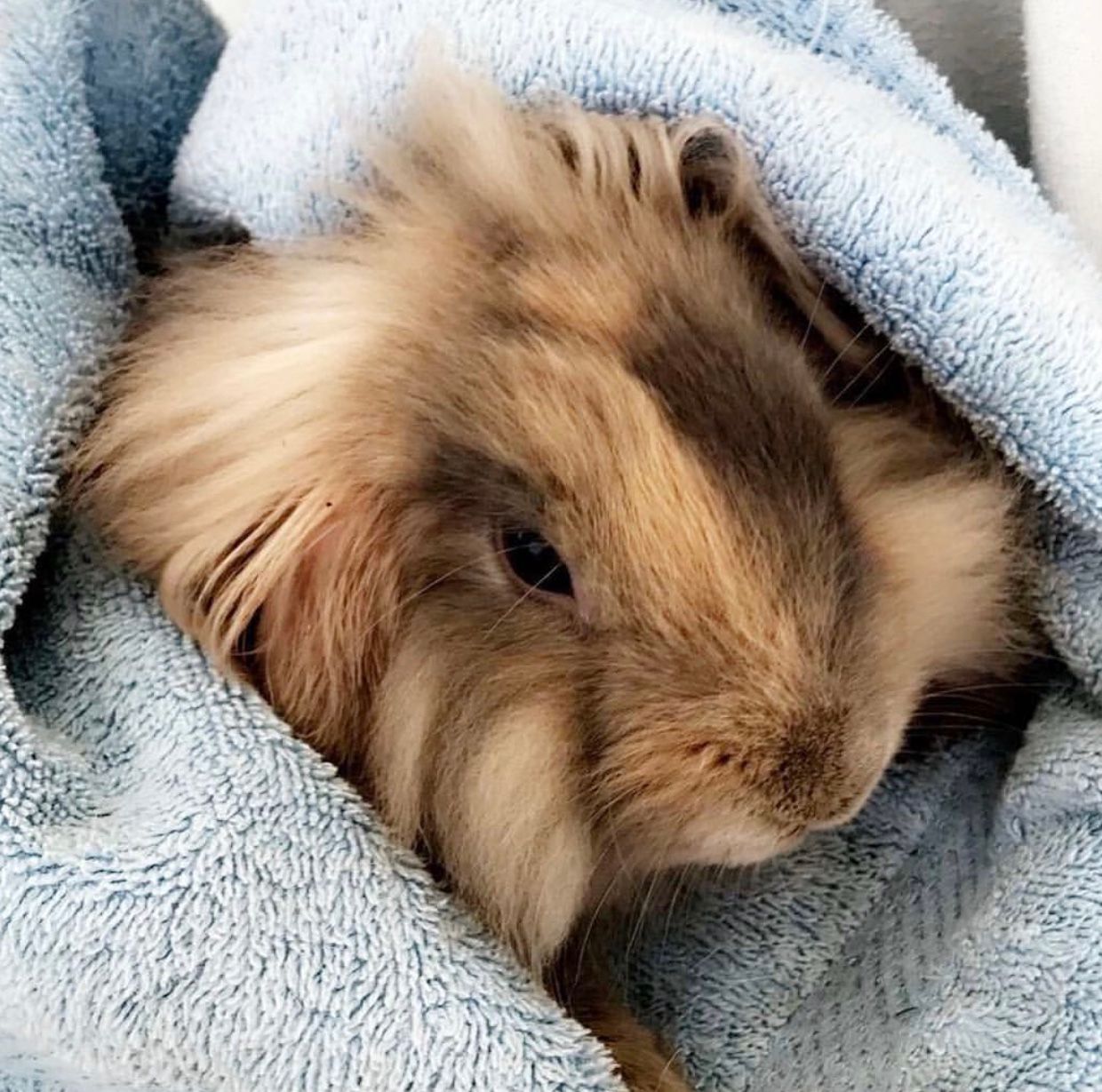 Do you have any tips for any future rabbit-owners – be they in or out of Pollock – on how to successfully raise their pet?

I think in terms of Pollock, you need to get the right cleaner, and be very nice to them. I think it’s easy to forget how much they do for you. Remember also that they are an actual live animal. A lot of people seem to have asked, “Can you bring him to this… can you bring him to that?” – he’s not a toy, he’s an animal.

Make sure you litter-train them – if you don’t that would be a fucking disaster. Also don’t worry about the warden. Their threats are just so spectacularly hollow. I have never seen such an amazing catalogue of inefficacy.

To finish, if you could sum up Oscar de la Rabbit in three words, what would they be?

I think anything that can be surmised in three words is either a victim of concision or is really not that interesting at all.

All in all, I can affirm that Oscar de la Rabbit is clearly subject to the highest levels of care and affection that any rabbit deserves – be they living in or outside of Pollock Halls. His owner was, naturally, rather allusive as to where Oscar is currently residing, and asks for us to respect Oscar’s privacy for the time being. Regardless of his location, however, a well-behaved and litter-trained rabbit like Oscar is hardly the wildest of animals that staggers through the gates of Pollock Halls at 4:00AM, with a VK still in hand and drawings of male genitalia scrawled in permanent marker across their forehead.