Not your usual weekend activity

One of the oldest tunnels of its kind in the UK, the Innocent Railway Tunnel was constructed in 1831. It lies directly beneath Pollock Halls of Residences yet is unknown to the majority of freshers who reside there. A place of both mystery and intrigue, we decided to take a sneaky wee look for ourselves to see what this peculiarly-named tunnel entails. 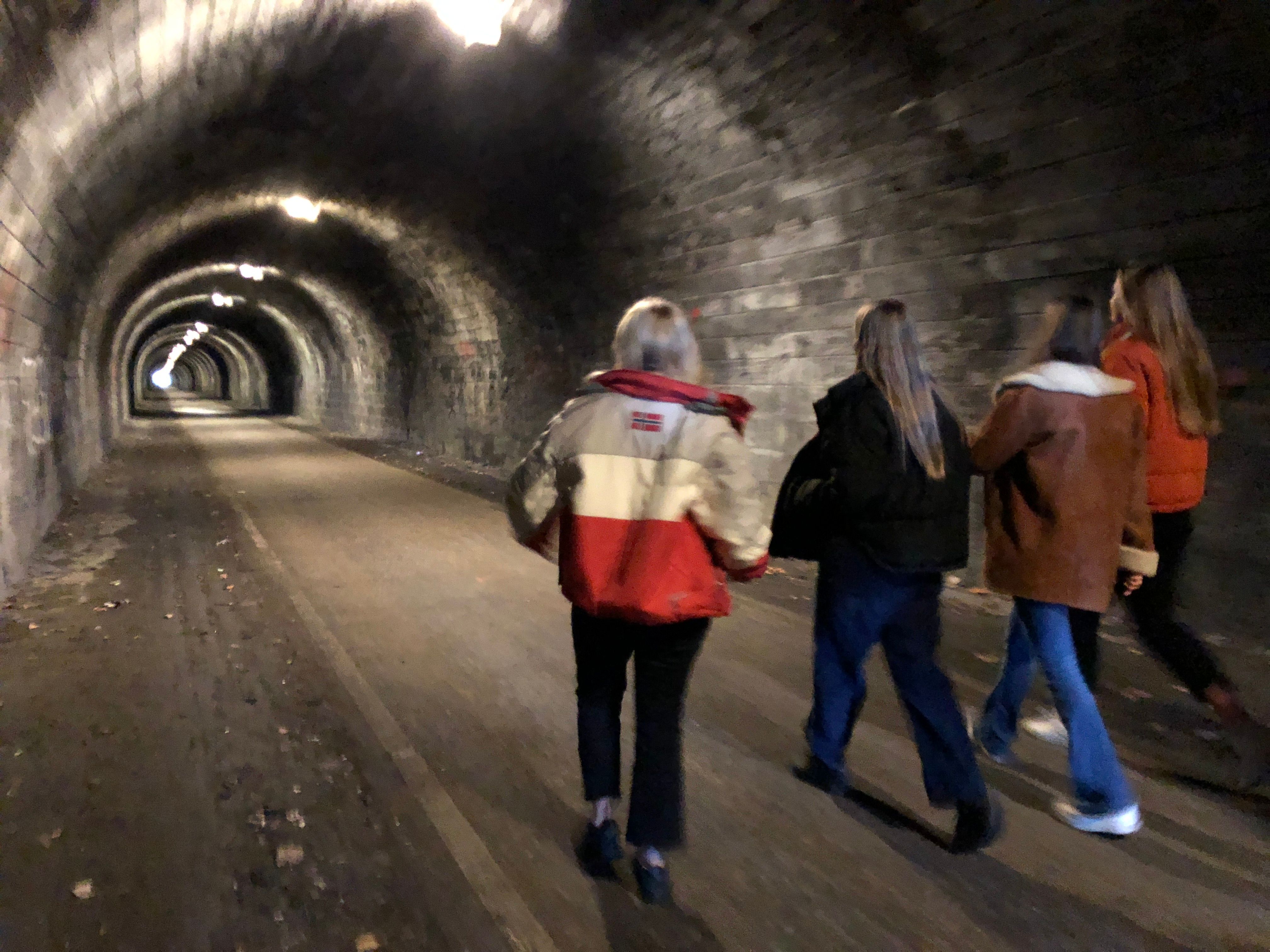 The gals striding along with a spring in their step, before realising they would have to walk 500 miles, then 500 miles more to reach the end of the ginormous tunnel

The tunnel was thought to have inherited its unusual nickname due to the myth that a fatal accident has never taken place in it during the course of its operation. First, it was a horse-drawn transportation line for coal, then later on was a passenger carrier. However, evidence has shown that injuries were, in fact, numerous, and multiple deaths – including those of two children in the late 1800s – took place in the tunnel also. Jinkees indeed.

Instead, others have argued that it was more likely coined the 'Innocent Railway' because at the time of its construction, horse-drawn transport – a distinguishing feature of the line – was seen to be a much safer and more leisurely option than the use of steam engines. With the new knowledge that this tunnel wasn't so 'innocent' and accident-free after all, the idea of going below ground to explore it became all the more intriguing. Naturally. 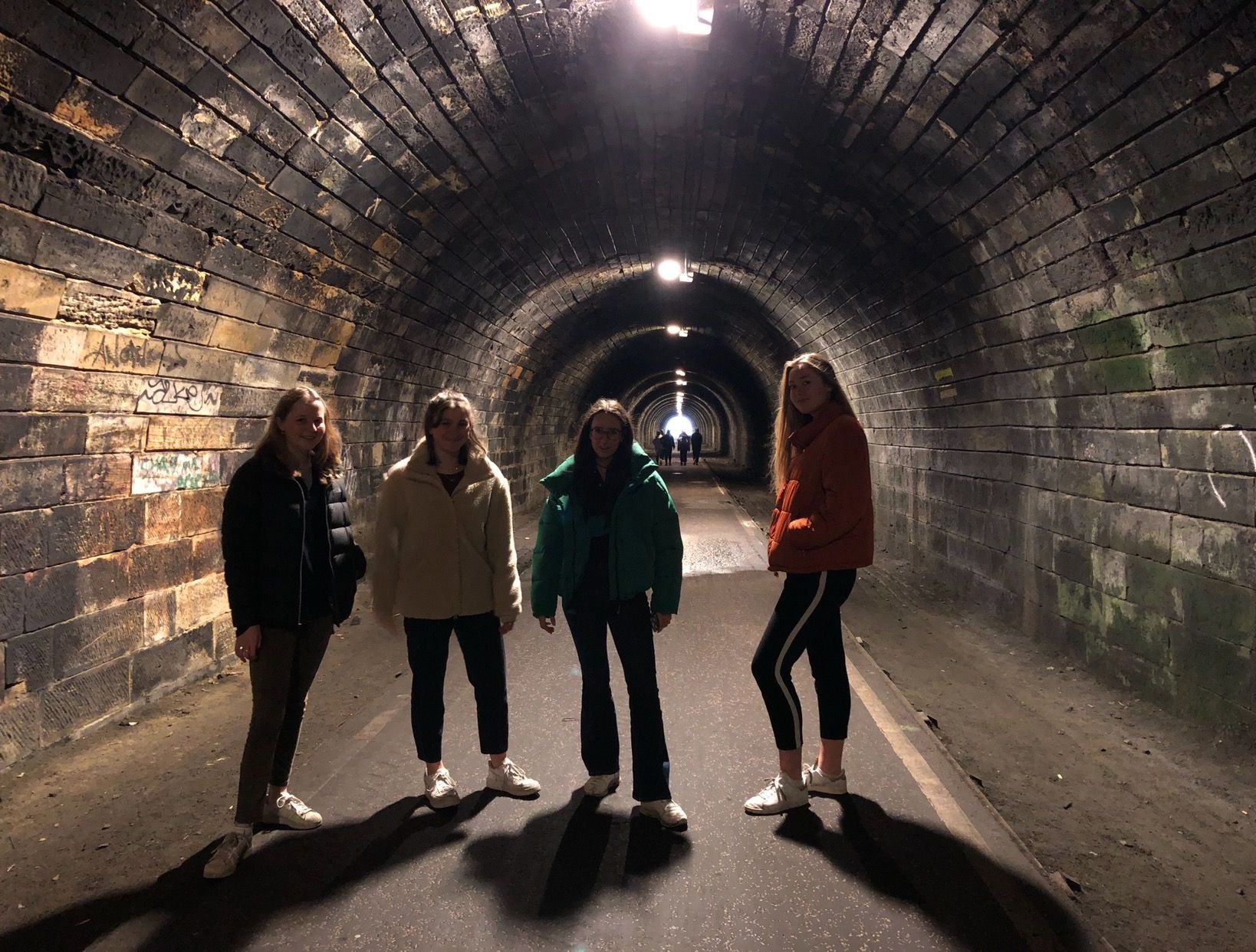 The album cover of a new underground, Scottish girl group, you ask?

Although the tunnel is now a perfectly safe public cycle path used daily by commuters, there was still a rather creepy vibe down there. A sufferer of chronic claustrophobia myself, there was undeniably a sense of neverendingness as we made the trek through the dimly-lit tunnel in which the light – and FREEDOM – at the end felt very far away for a sizeable amount of time. It was a feeling reminiscent of eagerly spotting what you believe to be your food arriving at a restaurant, only for it to be taken to another table. Absolutely gutting. 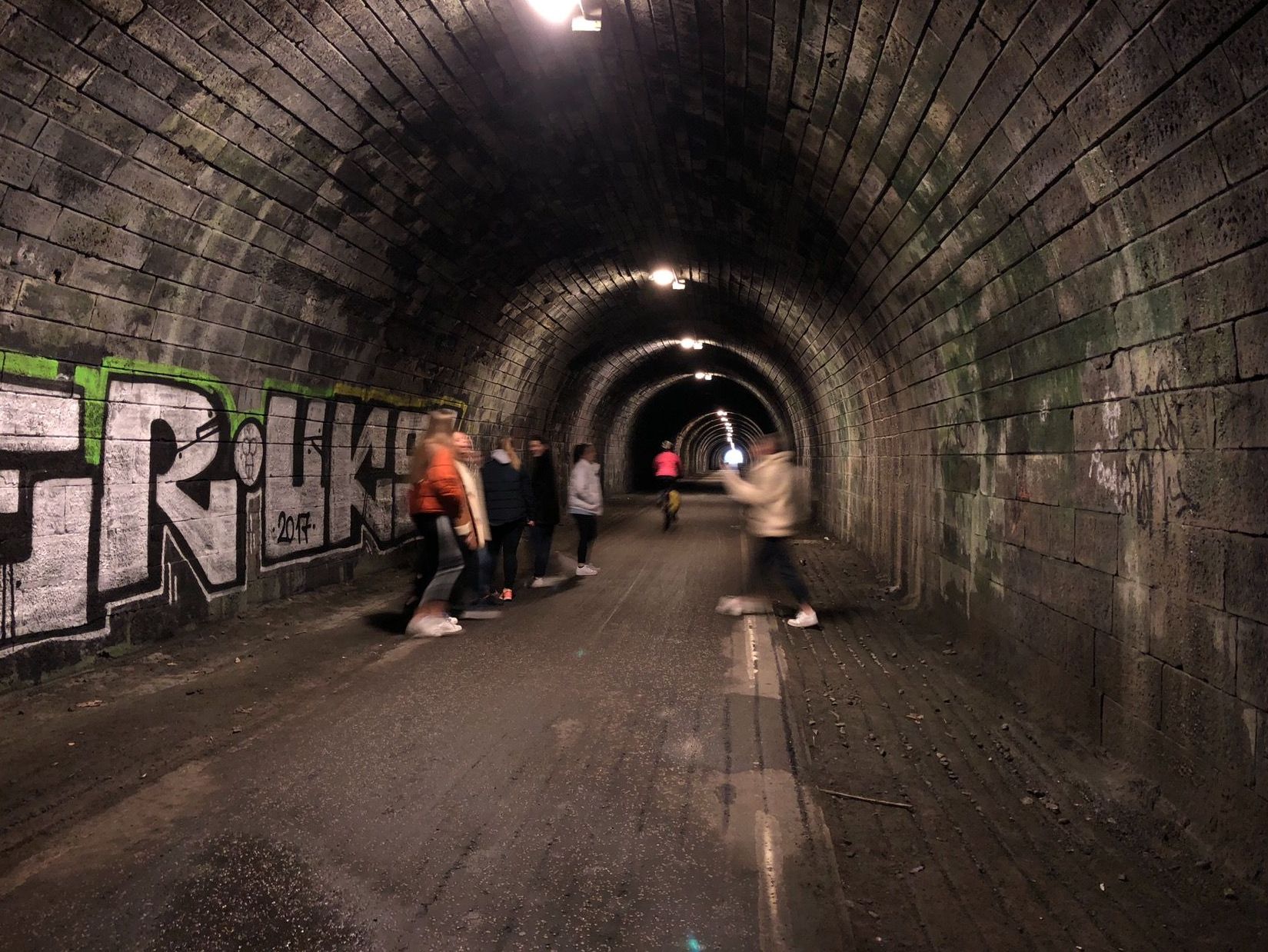 Disclaimer: Keep an eye out for cyclists when immersed in a photoshoot bang in the middle of a cycle lane.

Despite the eerie vibes and the fact that our group may have consisted purely of Southern softies – seriously, is anyone in Pollock Scottish? – we prospered on into the darkness. It may have taken us around 20 minutes to find the entrance to the tunnel just off Holyrood Park Road – apologies pals for not having done my homework – or Gold DofE, for that matter – but on finding it, we cast our fears aside and threw ourselves right in. After all, you only have to be able to run faster than at least one member of the group, right?

The tunnel itself is long, and, being a group of rather basic teenage girls, we, of course, resorted to taking indie pics for the gram to pass the time. We actually came across some rather cool, and at times questionable, graffiti and wall-art, with the majority of it being unfortunately too explicit to grace The Tab. Hence, you will have to pay a visit to the tunnel to see its more unusual wonders for your own eyes (say our names at the door for guestlist). 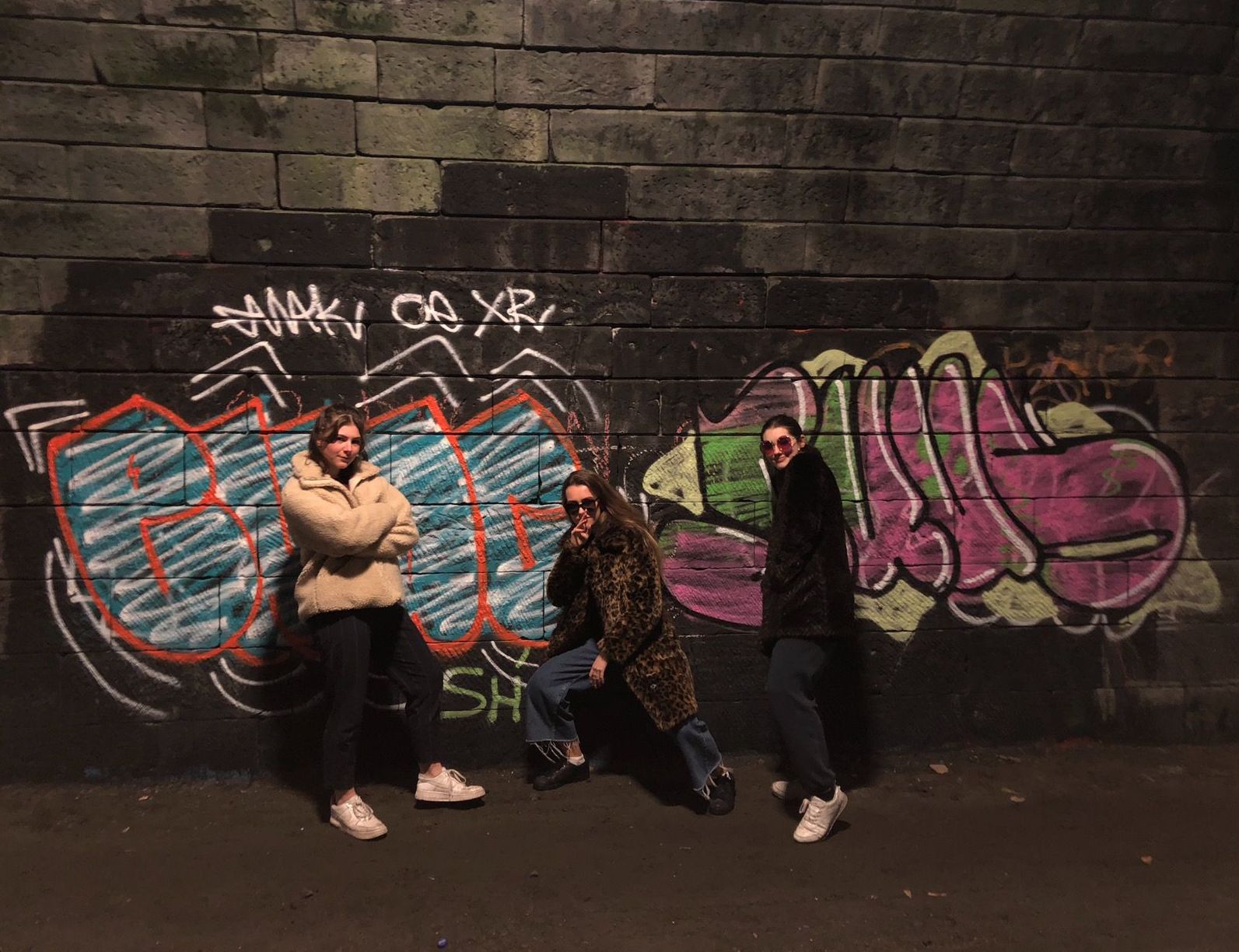 Because sunglasses are definitely a necessity in an underground tunnel

“What a remarkable place to host a rave!”, one of the group excitedly exclaimed mid-trek. We all agreed but, in fact, it appears as if we have already been beaten to it, with a huge rave taking place in the tunnel last year. Despite the long run up to the climax of the video clip below – in which a full-on shindig can be seen to be taking place – and despite the rather annoying and constant yelling of the cameraman, the event actually looked pretty sick. That is, of course, if hanging oot in a dingy, old railway tunnel at night is your scene. Each to their own, I suppose.

Nevertheless, the tunnel was still super interesting to visit during the day and, due to the sheer lack of bright light and loud noises, is a great route for a rejuvenating weekend stroll for anyone looking to get over that head-pounding hangover from a mad night out on the lash the night before.

We tried to film a cyclist's point-of-view of Tunnel last night and ended up with this. Great effort from Sam, the lack of bike lights made it tricky.

Who knows what potential the Innocent Railway could possess once word gets out about this mysterious spot and its unusual history. Could running solo through the tunnel on the first night of Freshers Week be the new obligatory climb of Arthur's Seat in order to avoid 7 years of bad sex? Or should the tunnel be left alone as an innocent – I use the term loosely – route for cyclists, dog-walkers, and joggers alike.

Either way, on discovering that the tunnel itself was not that creepy after all, the residents of Chancellor's Court can be rest assured that they may continue to sleep easy in their luxurious double beds and Egyptian cotton sheets, despite being just a couple feet directly above the Innocent Railway Tunnel. 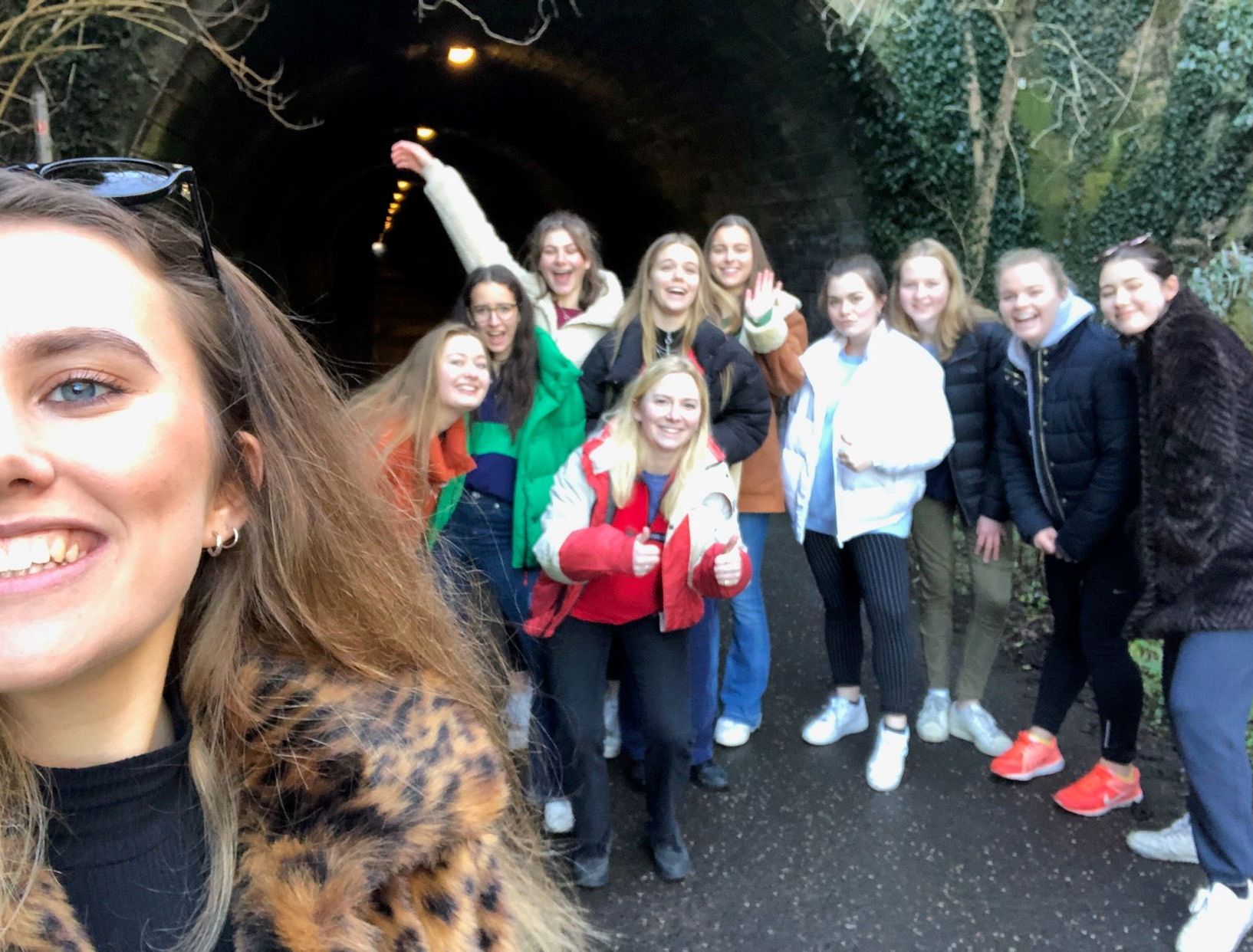 What better way to celebrate surviving a trek through the Innocent Railway Tunnel than snapping an absolutely tragic group selfie? I'm embarrassed for us, but 10/10 would recommend a visit