The dog’s not a mortar-border collie, he’s a cocker spaniel

A finalist who graduated alongside his delicious pet dog has told how the qualification would have been impossible without his lifelong pooch companion.

Jack Proctor, 34, and his cocker spaniel Fudge dressed in their honorary robes to receive their parchments BDes (Hons) in Design and Digital Arts from Edinburgh Napier.

Fudge, six, starred in Jack’s introductory video and course work, and featured prominently in his dissertation, which got an A grade. 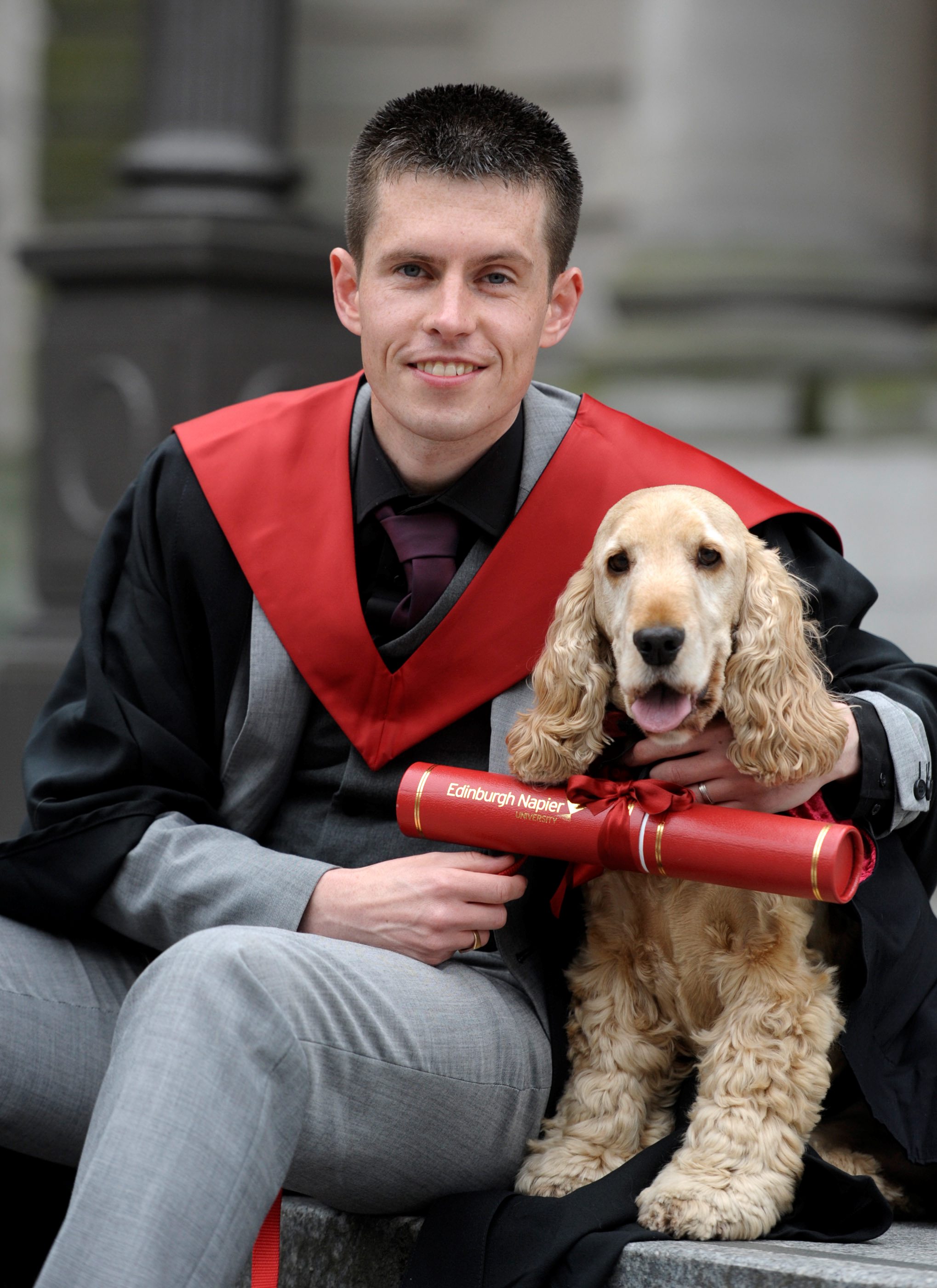 To mark his star role in Jack’s academic journey, Fudge joined him at the Napier graduation ceremony wearing bespoke robes made by Jack’s wife.

Fudge soaked up the attention from fellow grads and even paws-ed for photographs outside the venue where he had an adorable uni scroll attached to his red collar.

Jack, from Coatbridge in Lanarkshire, said: “It’s great and means a lot. He’s been my best friend for six years and he put in as much work as I did so it felt only right for him to be here.

“I had a few pre-match nerves but he didn’t. He’s a natural, I’m the side-kick.

“I was very nervous in front of camera and just to have Fudge there to take the focus off me so I could sink into the background which was ok.

“It started off way back when we were first asked to make introductory videos and I was a bit camera shy so I kind of chickened out and I got fudge to do it in a humorous manner. And it went down quite well and got a few laughs in class.

“From then on he made cameo roles in videos throughout my studies. For my honours dissertation I thought for one of my research things I would try and make some videos.

“I thought because Fudge had helped me this far he may as well help me with that.

“Then we made some videos and then they went viral so this is much his graduation as much as mine.

“It’s fantastic. It’s been a great journey. I’ve had a great experience through university with a class full of inspiring and creative people, it’s really helped me get to where I am today.” 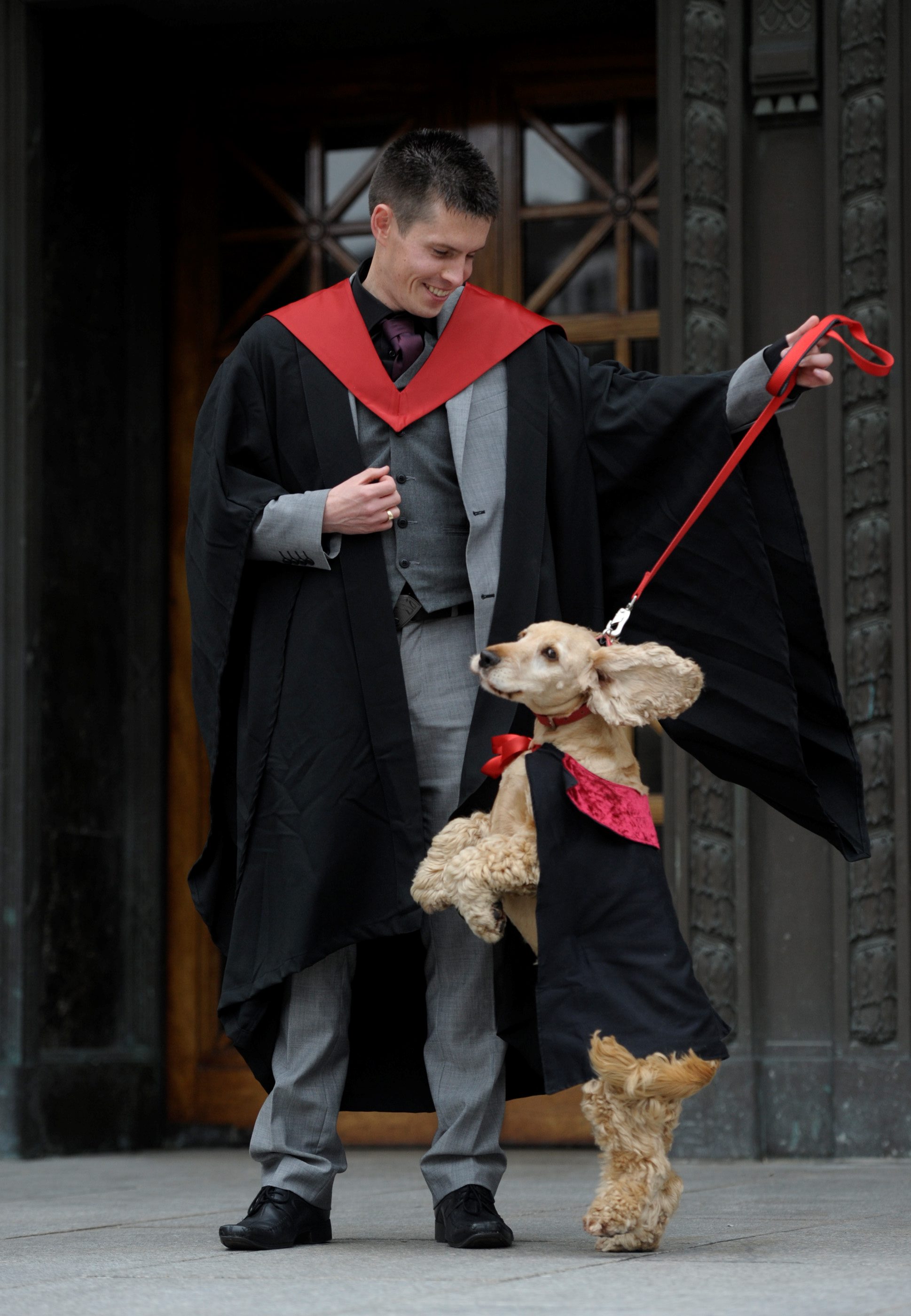 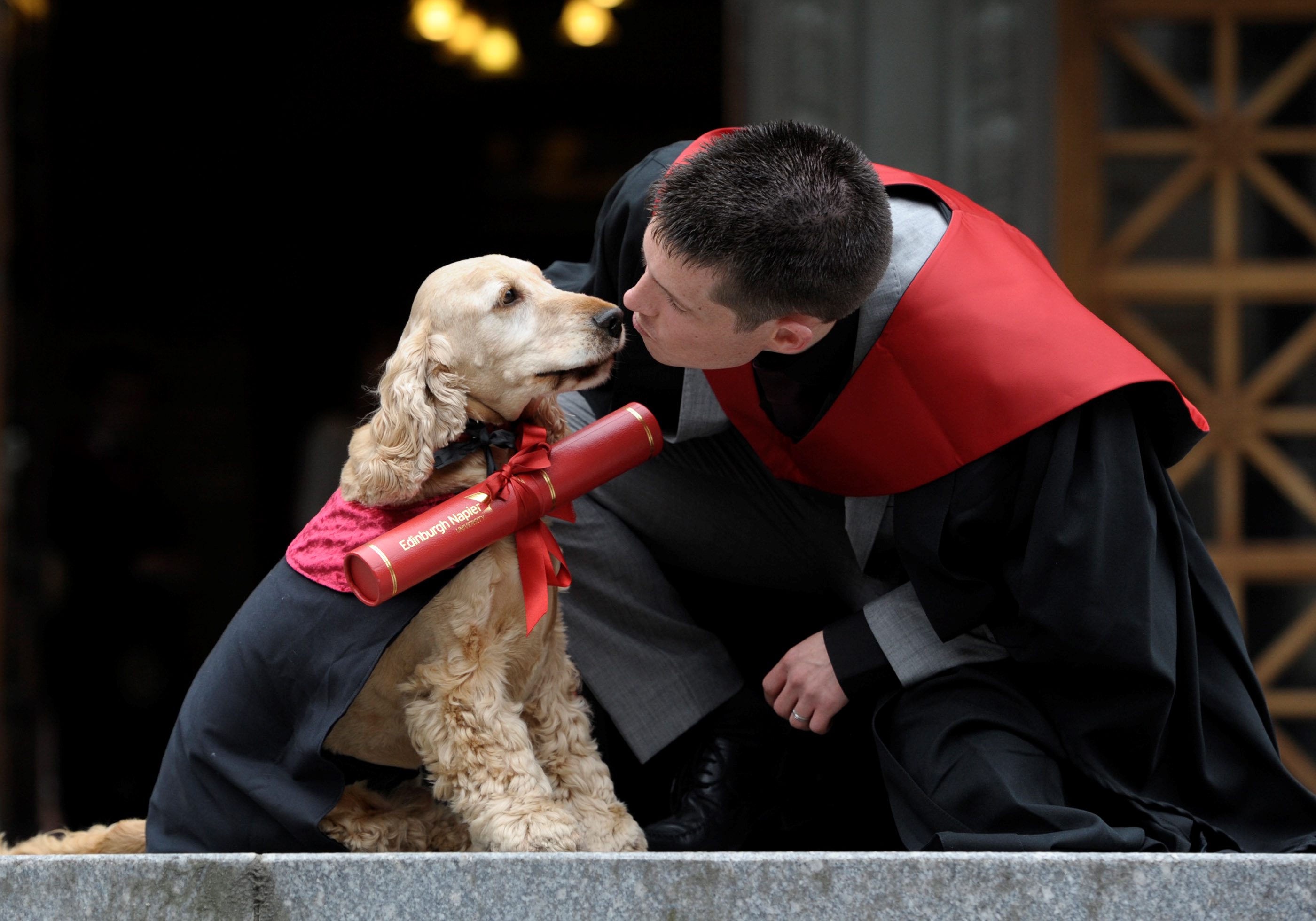 You look good enough to eat

Jack and Fudge delighted animal lovers during last year’s Ice Bucket Challenge craze when technical trickery was used to show him being hoodwinked into getting a soaking by his four-legged friend.

But their video collaborations go back to his very first day at the uni, when Jack’s class were asked to make introduction videos.

Fudge was given the lead role in Jack’s film and the laughs which followed encouraged him to keep putting his mutt in the spotlight. 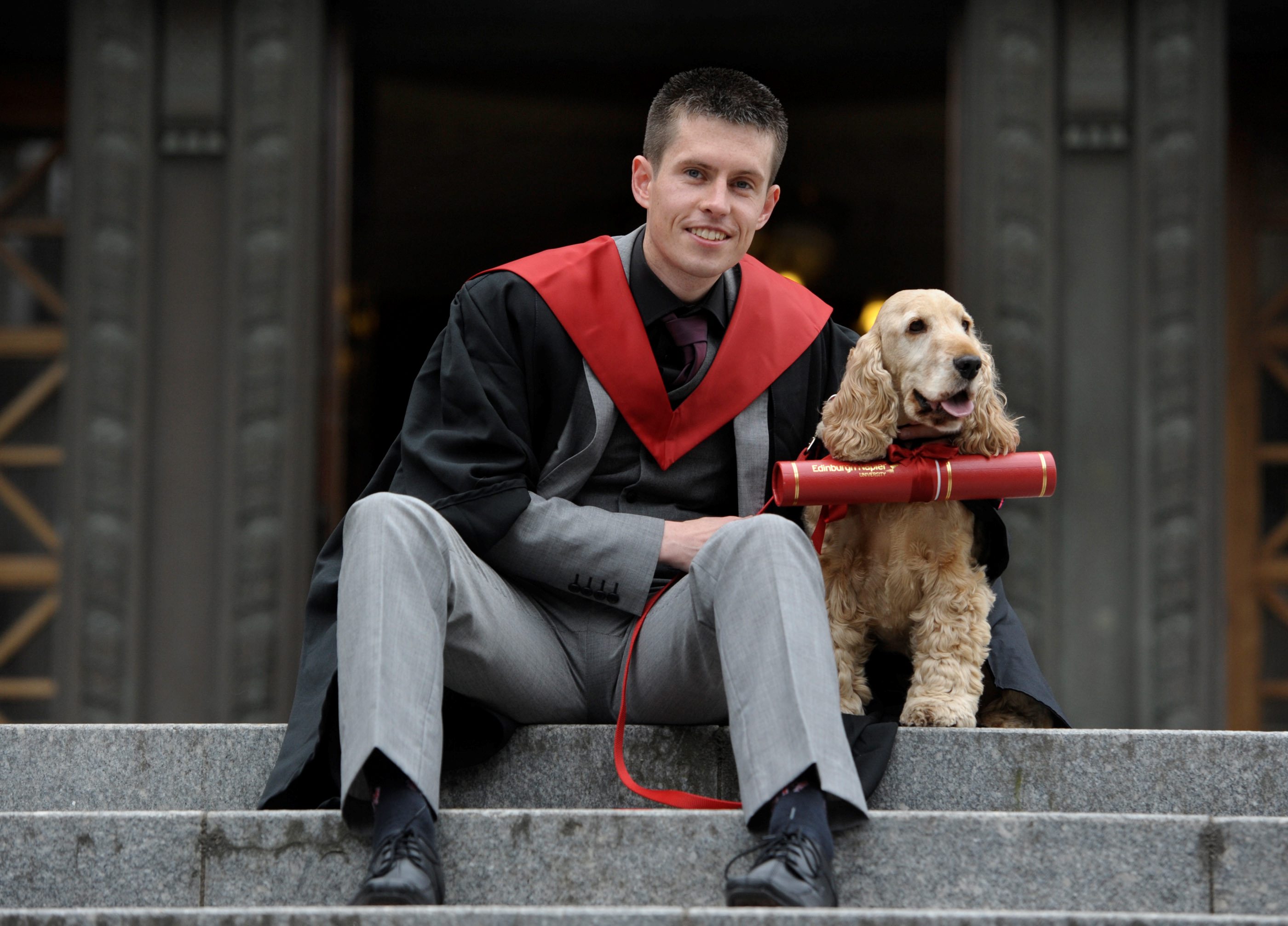 Look at me and my dog 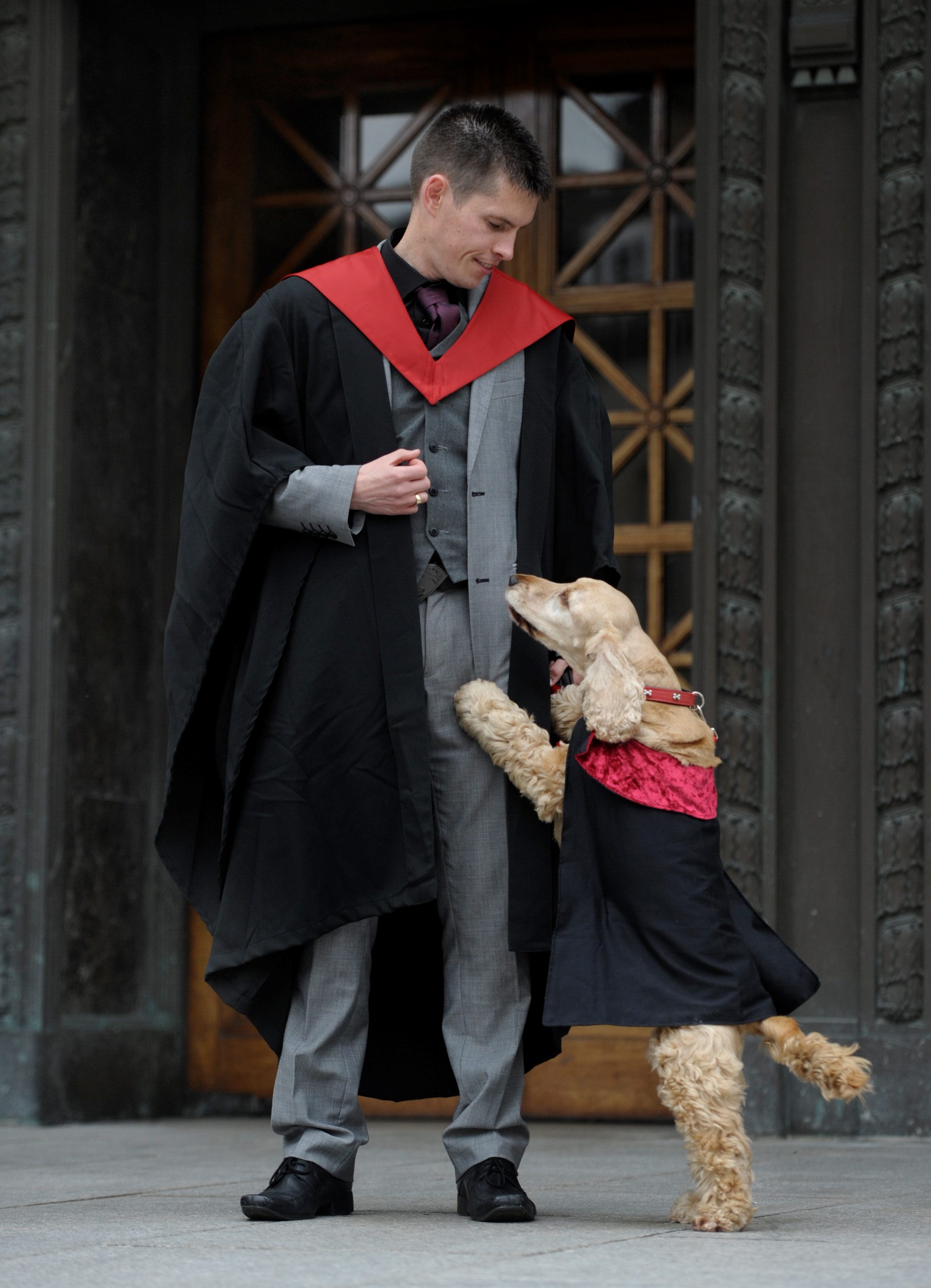 I love my mutt

The star pooch featured in a series of videos for Jack’s dissertation on how designers can optimise the shareability of their work.

He also took lead and cameo roles in Jack’s course assignment videos including The Dog Dice, where Fudge plays Snakes and Ladders and the Soi Dog Foundation.

Jack added: “Our Ice Bucket Challenge video was our most successful, with millions of views on Facebook and 250,000 on Youtube, but other videos we had made have had view counts ranging from 30,000 to 300,000, and have appeared on news video sites.

“We are very much a partnership so it just seemed right that Fudge should share my big day with me.”

Will Jack and Fudge return for a dog-terate?