Scaffolding standing in the way of McEwan Hall graduation

Current third and fourth years will graduate in Usher Hall

Graduating in a beautiful, historic setting is the stuff of many students’ dreams.

But those leaving Edinburgh uni in 2015 and 2016 will be denied the chance to throw their mortar boards in the air outside McEwan Hall.

The uni recently announced the construction won’t be completed until December 2016. 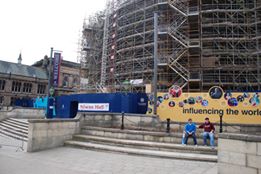 Thank you for ruining Bristo Square

“It’s such a shame. One of the privileges of studying at Edinburgh University is that you get to graduate in the historical McEwan Hall.”

Fourth year Mawish Moulvi said: “It’s a shame, I was really looking forward to graduating there.”

But others couldn’t care less. Third year Katie said: “I don’t even know what building that is.”

Usher Hall has been lined up as replacement venue for those affected.

Current second years and below will graduate in the brand-spanking-new refurbished hall.