EUSA, Feminism… Wait, Have We Been Here Before?

A motion promoting the decriminalisation of sex-workers has been passed by EUSA.

EUSA has passed a motion promoting the decriminalisation of prostitution. The motion was tabled at last Thursday’s Student Council meeting, and went through comprehensively.

The motion was originally tabled by Naomi Beecroft, who, interestingly enough, wore two chains to the event, although it isn’t known what her rapping contemporary thinks as of yet. The result was lauded by some as a feminist triumph against the possible criminalisation of the act of purchasing sex in Scotland.

EUSA: Back in action, doing its ‘thang.

Rhoda Grant MSP has brought forward a bill that proposes, in order to protect sex workers, to end demand by making it illegal to buy sex. This bill would bring Scottish law into line with Scandinavia, where buying sex is illegal, but selling sex is not. Interestingly, laws such as this have been brought in, not as restrictions against immoral behaviour and licentiousness, but as a way to protect the sex workers themselves.

Moving past the complications that this individual bill has caused with Amnesty International, and the possible quandary that it puts feminists in, this bill does in fact have a direct effect of Edinburgh students. 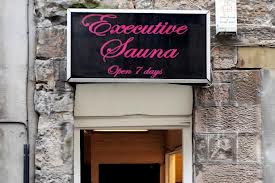 A ‘ahem’ sauna. No, actually, its just a sauna. Really.

Whether you see it or not, there is an overlap between sex workers and students, not just in Edinburgh, but across the UK. Paris Lees, LGBT activist, recently wrote an article for VICE on this exact matter. However, it isn’t just students who sell sex it possibly affects. Seedy underbelly of life it may be, but students can buy sex too.

With the removal of licenses for sex saunas in Edinburgh, the sex industry is an uncertain place. Scot-pep, a charity dedicated to sex worker’s rights, has decried both the new bill and the removal of licenses. EUSA has its critics, but it remains on topic, promoting a subject that is both difficult to discuss and to legislate on.