Listen up and Embrace the Waste people

"Embrace the Waste" is a new initiative which began at Castle college last year. We caught up with its founder, Durham student Matthew Unerman, to find out more about the initiative, and how other students can get involved.

Tell us a little about yourself?

My name is Matthew Unerman and I’m a final year Anthropology student at Castle College. I consider myself a keen and active environmentalist, as we are at a critical point where we have the chance to reduce some of the devastating consequences of climate change. I believe that change both at the individual and corporate level is necessary to stop a [further] climate disaster. 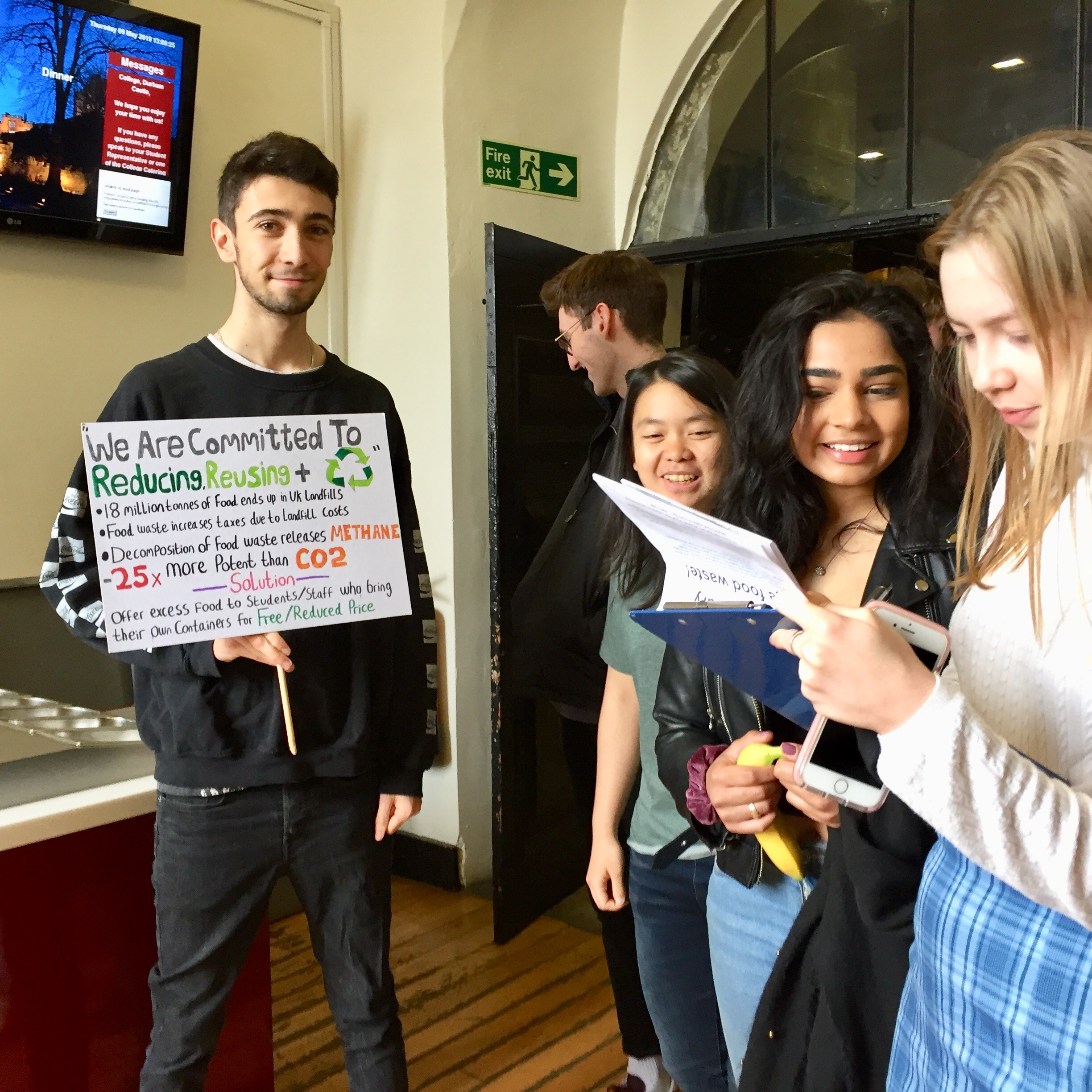 What exactly is the "Embrace the Waste" campaign?

Embrace the Waste is a food-waste initiative that offers non-catered students the chance to come to a meal and eat the food that would otherwise be thrown away for a minimum donation of £1.50. This money goes toward the chosen college charity. The food served is already cooked for the last shift of the meal time, so as opposed to creating more waste, it reduces food waste.

What prompted you to start it?

During exam season in May 2019, I was revising in college and decided to see if I could grab myself a free lunch at the end of the meal. For me, I could see no reason why I shouldn’t be allowed the food as no one else wanted it.

I was told I couldn’t have the food, and when I asked what happened with the left-over food I was told that it went straight to the bin. Not only was I now hungry and confused, I was also pissed off. The next day I made a protest sign and sat in the servery at lunch for a week protesting. No one joined me but everyone praised the protest and said they agreed with it.

In just 5 days I had managed to convince my kitchen manager to start a food waste-reduction scheme, and in just 2 weeks we had stopped around 90 meals from going to waste. Starting university this year, I was extremely keen to reintroduce the scheme, rebranded as "Embrace the Waste".

In its first full week of implementation, we had 161 students use the scheme, and we had raised £242 for the college’s charities.

How have college staff reacted to your campaign so far?

Initially, college staff were quite reserved with their opinions as it was during the beginning of the restructuring of the college staff. However, every single staff member who walked passed me protesting told me they were happy that I was protesting, including catering and office staff.

The Castle kitchen manager has been great in helping support the scheme and get it running in college. Recently, I met up with the Head and Deputy Head of Catering for the whole university, and again they were very positive about Embrace the Waste, and we are working together to get it implemented in every catered college.

What are you hoping to achieve with your petition?

Whilst I have the support of the Head and Deputy Head of Catering for the whole university, I still need to work on convincing the kitchen managers of all the colleges that the scheme is practical, worth-while, and has a huge body of support from the students. Seeing the different reasons for signing that people give is inspiring and makes me want to fight even harder to get this scheme implemented. 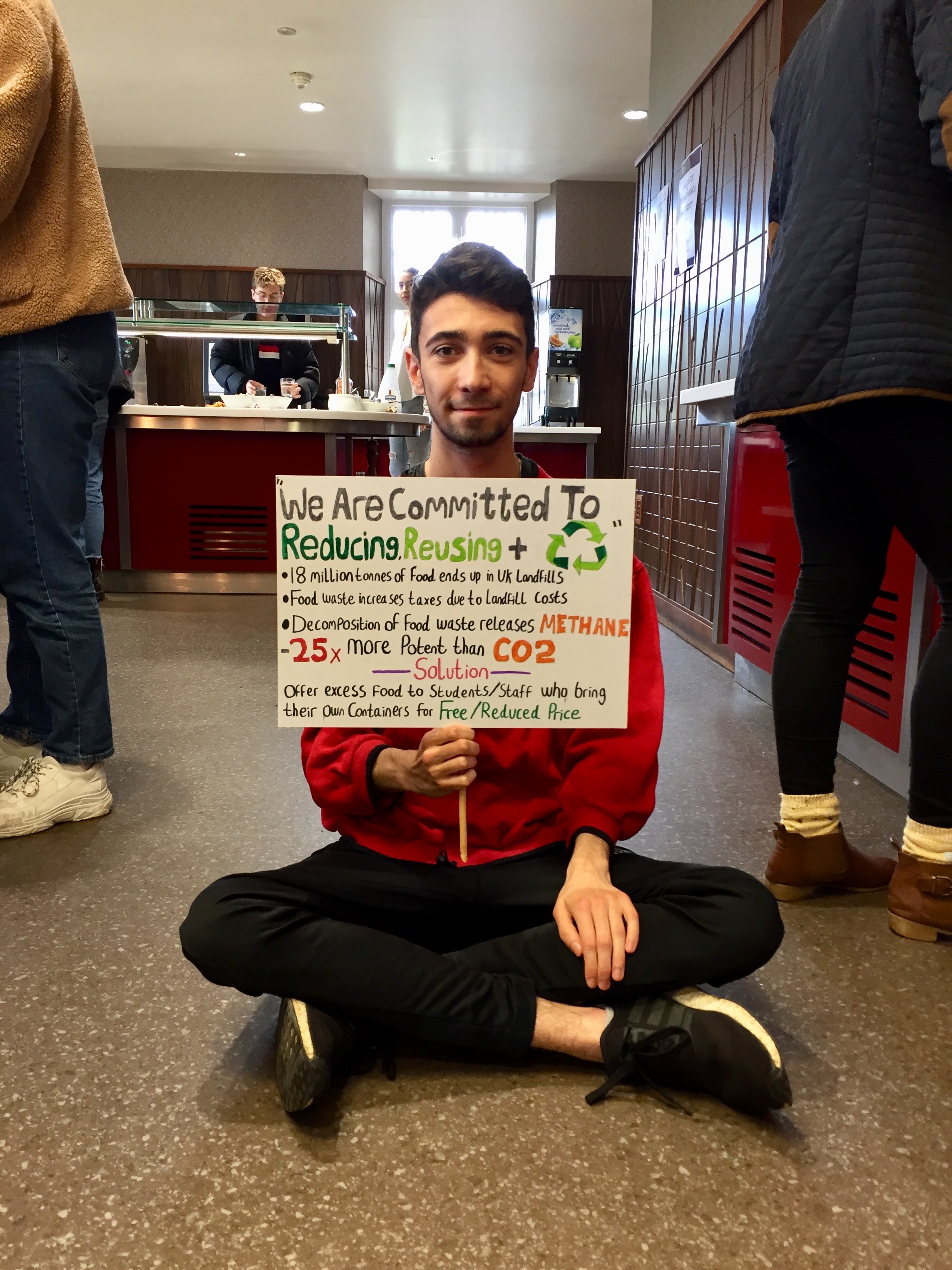 How can other students get involved in backing the campaign?

There are many ways that other students can get involved and help support Embrace the Waste.

2) Sign the petition to show your support. The petition can be found at the bottom of this article.

3) Become a College Rep! You don’t need to be living in college to do this, all you need to do is be passionate and enthusiastic. Once the logistics have been ironed out, we will need College Reps to help run the scheme in all the different colleges.

Do you think the university is doing enough in general to curb climate change? If not, what more do you think could be done?

This is definitely not an easy question to answer as there are many facets when talking about action to curb climate change. I can say with certainty that the university is working to make their food a lot more sustainable in a few different ways. Firstly, they are trying to implement Embrace the Waste. 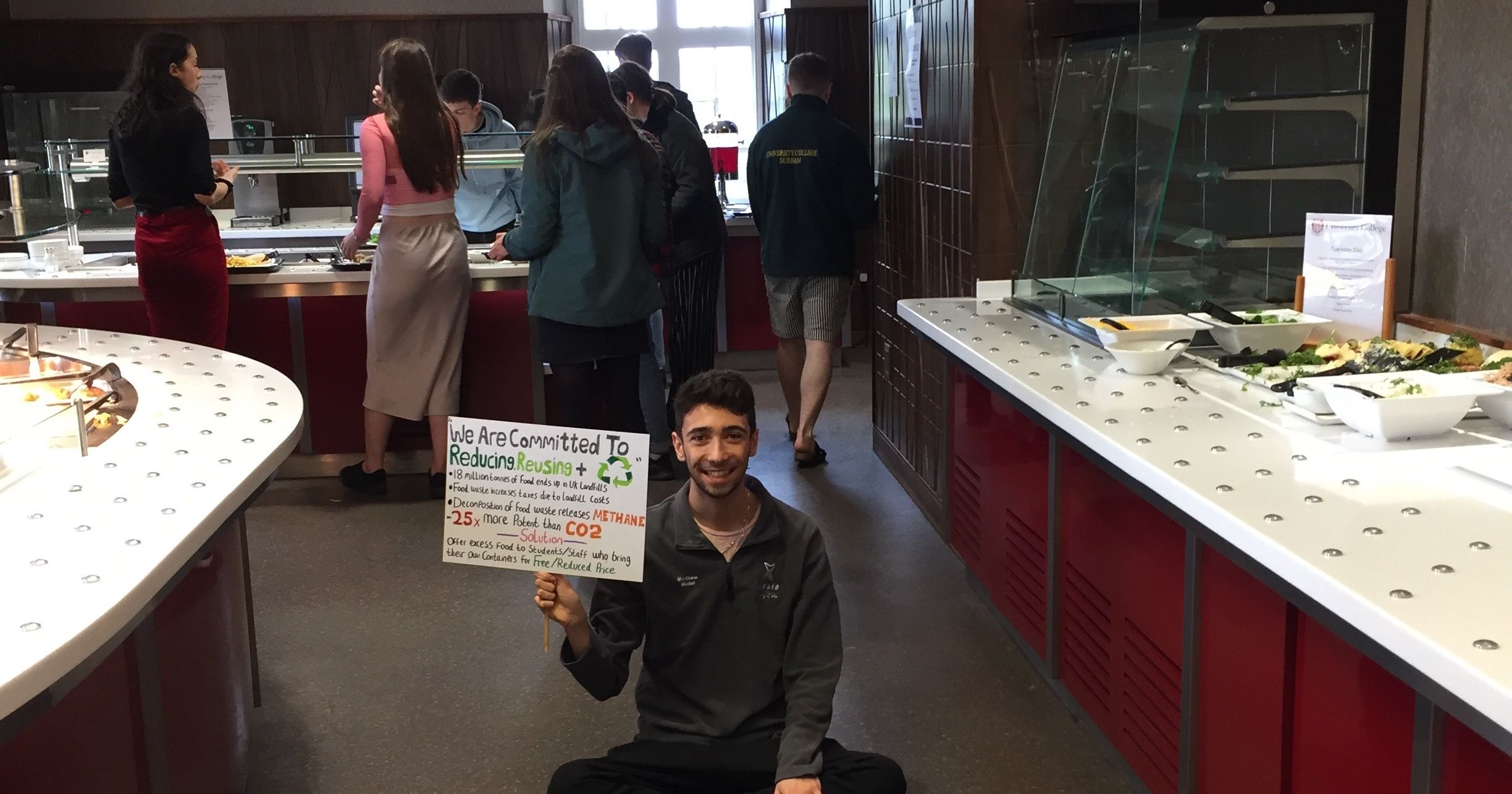 I feel that Durham University has focused heavily on rapid expansion, and in doing so has overlooked some easy eco-friendly ideas as well as overlooking some of the consequences that arise from construction. North-East England is not particularly strained for fresh water, but fresh water as a global commodity will become increasingly rare and expensive. In an already strained-for-space area, I think the construction of new colleges and student accommodation is irresponsible in many ways.

However, Durham University often looks to consult experts on ways to increase sustainability and sometimes expert advice is not always correct. Durham University, just like any individual, business, or institution, could be doing a lot more to curb climate change, but I do feel that they are trying to work towards a greener future, they just might need some innovative suggestions from students to help them achieve this future. 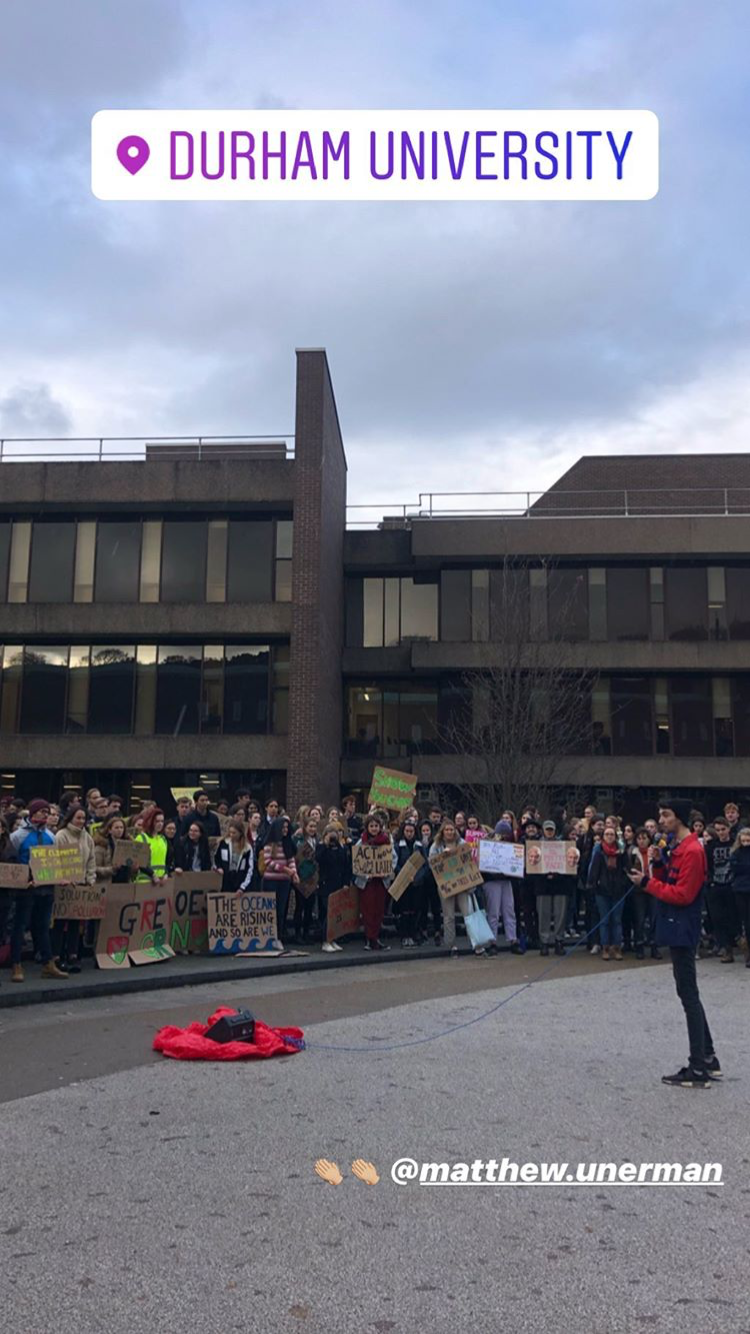 Matthew speaking at the Climate Strike on 15th November

Where are you hoping Embrace the Waste will be at the end of this academic year? Do you think there are any barriers from the university that might prevent its success?

In an ideal world, Embrace the Waste will be implemented in every catered college and will be a popular scheme that would have raised thousands of pounds for charity and saved countless meals from going to waste. The only barriers to this I can see are some colleges having separate catering systems e.g John’s, and others not having the staff / facilities to do so.

In a slightly different turn, I have also been talking to food businesses in the Durham area to see if they would like to implement an ‘Embrace the Waste’ scheme in their shops.

So far the response has been positive overall, with a couple of places confirming their participation in the scheme. I would love to see the majority of businesses in Durham County running this scheme, as there are many benefits for businesses who run the scheme.

The petition in support of Matthew's "Embrace the Waste" campaign can be found here.