Every boy you’ll meet on Tinder in Durham

Ah, Tinder. We love to hate it. Nobody I know has had any real success from it, and yet still, they're unable to resist the urge to drunkenly redownload the app at 2am for a late night swipe. Frankly, I don't see the point. You're only going to be met with one of the following anyway…

Is this guy looking for a girlfriend, or just someone to flatter his ego? In his photos, he’ll either be holding a pint or his protein shaker, and as a bonus, he’ll probably include his team’s photo from the college naked calendar. How else are you going to know he’s got a decent rig?

What his bio will say: “If you can beat my pint time, I’ll take you on a date”

What his opening line will be: “You out on Wednesday? Maybe see you when I’m on my social x"

How the date will end: Shit missionary that only lasts about twenty seconds.

This one doesn’t mess about. You and your housemates will swiftly realise he’s sent you all the same message, labelling each of you “the cutest girl he’s seen on here”. He’s here for one thing only, and God knows he’ll try his absolute darnedest to get it.

What his bio will say: “Not really looking for anything serious”

How the date will end: This one doesn’t date as such – he just takes you out for as many drinks as it’ll take for you to find him attractive. He’ll repeat the process about three times a week, just to get his college bingo stats up. 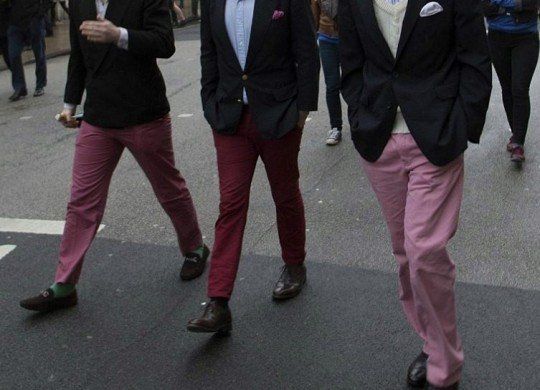 You don’t even need to look at the photos to know this one’s a posh boy- his name alone (something ludicrous like Spartacus or Zebedee) will be a giveaway. At least one photo will feature him in red chinos, and another in tweed. Don’t forget the token picture from a social where he’s wearing some ridiculous fancy dress, in a desperate bid to prove that he is in fact fun.

What his bio will say: “Wiltshire / Durham. Looking for a girl I can bring to our holiday home in Lake Como x”

What his opening line will be: Something a bit weird like “If you were a drink, you’d be a Dom Pérignon. Classy and intoxicating”

How the date will end: He’ll be too awkward to make a move on you, so will opt for a really uncomfortable hug in which he tries a little too hard to avoid your torsos touching.

The guy with only one photo

I’m not really sure what this one’s trying to achieve. Somehow he expects you to glean huge amounts of information from a single picture- more often than not, a mirror selfie where the camera flash obscures his face anyway. Come on babe, I’m going to need a bit more than that.

What his bio will say: He won’t have one- that would be giving too much away

What his opening line will be: “Hi”

How the date will end: Probably with your murder.

The one that doesn’t go to Durham

Somehow you can just tell whether someone on Tinder’s a Durham student or not. Frankly, the local’s profile will be the most “normal”, but there’s something about an absence of DU stash and Klute club photos that just makes the whole thing seem a bit off. Then too, even if he seems otherwise perfect, he’ll live outside of your designated one mile radius, so you’re never going to make the effort anyway.

What his bio will say: “Here for a good time, not a long time. Love going to the gym. Don’t bother matching if you’re not gonna reply x”

What his opening line will be: "Hey beautiful, how's it going?", followed by an obscene amount of emojis

How the date will end: A really long walk home for you, because he probably took you somewhere other than the classic Boat Club.

Oh how the mighty have fallen. He thought he was too good for you back when you broke up, and that he’d land into a new relationship with someone 10x fitter immediately. And yet here he is, back to his tragic swiping along with the rest of us. You’ll 100% stalk his photos and critique them extensively on some girls’ group chat, and secretly feel smug when they text back agreeing that actually, the photos he’s picked aren’t all that fit.

What his bio will say: Whatever it is, you’ll tut at it

What his opening line will say: Good luck getting a match in the first place

How the date will end: I’ll pass, thanks.

I was talking with one of my friends a few months back when she piped up with the assertion: “I swear literally every girl in Durham has had a really bad first date at The Library”. When I think about it, a truer word has never been spoken. This guy’s profile had seemed so wholesome, and to this day, you’re still not sure where it all went so wrong. Anyhow, it’ll be a sharp swipe left- the mere thought of you two ever speaking again is just the most awkward thing ever.

What his bio will say: "If you don’t like dogs, it’s not going to work, sorry x"

What his opening line will be: N/A

How the date will end: N/A.

Usually a humanities student, this one will do everything he can to flaunt how cultured he is. His bio will just be a list of his favourite bands and inspirational quote pages on Instagram. He’ll dress in trousers that are slightly too short, just to be edgy, and at least one of his photos will be a candid of him frolicking in some dandelions on Observatory Hill.

What his bio will say: “Arctic Monkeys // Kasabian // The Vaccines. Particularly enjoying reading autobiographies at the moment”.

What his opening line will be: Probably a poem asking how he “shall compare thee to a summer’s day”

How the date will end: He’ll burst into a dramatic soliloquy about how he’s not over his ex, and you’ll promptly leave and never contact him again.

This one’s always a tricky one to navigate. You don’t want to swipe left in case it comes across as rude, but at the same time, you worry that if you swipe right, they might not realise it’s banter, and might genuinely think you’ve fancied them this entire time.

What his bio will say: Literally just the basics: “3rd year NatSci at Collingwood”

What his opening line will be: "Fancy seeing you on here haha x"

How the date will end: There won’t ever be a date, but next time you see each other, you still won’t talk in person, despite your extensive Tinder exchange lasting several days. 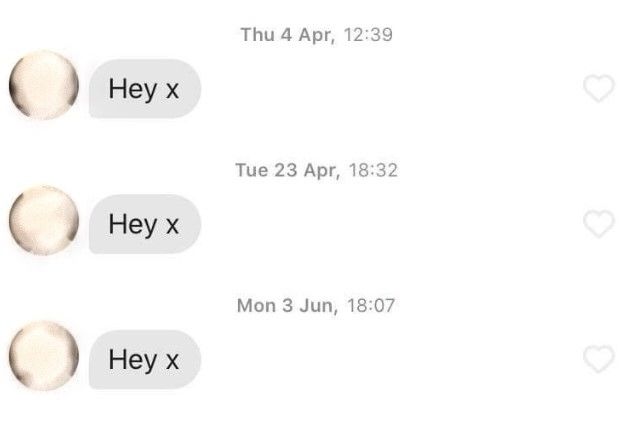 This one’s probably had Tinder for ages, and doesn’t realise that his overbearing bio is actually putting girls off. He'll refresh the app every hour or so, desperate for a new match, and will always ask his housemates for extensive input on what he should message someone.

What his bio will say: Literally his entire life story

What his opening line will be: A really cringe poem tailored to the girl’s name, in a diligently constructed iambic pentameter

How the date will end: He’ll do all the right things: ask for your number, give you a friendly hug, promise to text you the next day. Unfortunately, he won’t have picked up on the fact there was literally no chemistry, and that you aren’t exactly planning on date number two yourself.

These tend to fall into one of two camps: either a real keen bean who’s desperate to lose his virginity, and will message every single girl he matches with in a bid to make it happen, or alternatively, some wannabe Don Juan, who wants nothing more in life than to establish the reputation of top shagger amongst his group of friends. Either way, he’s still young and naÏve enough to think that the monkey with its hands over its eyes emoji counts as a legitimate form of flirtation.

What his opening line will be: “What you up to aha? You’re really fit btw aha”

How the date will end: He’ll end up way more drunk than you despite both drinking the same amount, and try and slur requests that you go back to some really far hill college with him. You’ll refuse, because walk of shaming back to the Viaduct from JoBo just feels like a bit much. 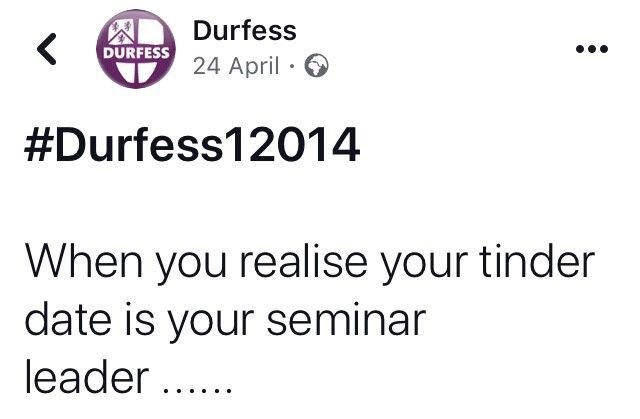 This one will really play up the fact he’s more mature than you, and will adopt an eerily formal tone for the entire conversation. Calm down, love- you were born in 1995, not 1905. If this works out, it won’t be the age gap romance you seem to think it is.

What his bio will say: “Looking for a lovely lady to wine and dine, and hopefully find a really strong connection with”.

What his opening line will be: “Well hello there, beautiful. How are you on this fine Sunday evening? I hope you don’t mind me messaging you. Can I tempt you with a beverage at a local tavern sometime?”

How the date will end: You’ll be so traumatised at how quickly this guy wants to get serious, you’ll conclude that going back to sharking might not be such a bad thing after all.