The Musicians’ Union of Durham students (MUDS) have written an open letter to the organisers of the University College June Ball demanding higher fees for the 250 performers.

The open letter has been backed by over 200 students, with many more expected to come forward in support.

In the letter, MUDS demands "fair payment". The Union argues the "hours of practice, preparation time, and other behind-the-scenes factors" are not adequately reimbursed. The exec told The Durham Tab they would be meeting with MUDS on Thursday to resolve the issue.

According the letter, performers are currently paid based on features such as location, “intensity" of performance, and predicted audience size – the lowest tier payment is £13.

The June Ball is the largest of University College’s yearly balls with over 900 attendees. The event has been featured in Tatler magazine.

Tickets cost £121 for a Castle student to attend the meal as well as entertainment for the night. Non-Castle members have to pay an additional £35 contribution fee on top of their ticket price.

Heads up Castle! In exactly a week's time, we'll be releasing the signup for June Ball! So get those dates ready! ? . . . . . (*Only one signup per couple. More info to come so be sure to check those emails) #castlejb2018

A performer told the Durham Tab: “I can't believe how little we are being paid for how much time and effort it takes us to be able to perform at an event like this.

"Not only are we being under-appreciated as performers, we are also being taken advantage of in a professional capacity.”

Last year, The Durham Tab reported performers had to pay up to £70 for tickets to attend the June ball after a £23,000 overspend. According to the letter, performers were told this would be "a one off".

While the exec maintains £12.80 is "a good hourly rate for a student job," MUDS argues musicians should be paid the national gig rate of £41.50 an hour. They also claim there should have been a reason given for the current rate of pay, given the ticket price is lower than it was last year.

The letter says: "Sadly, it is clear that performers are not a priority for this year’s June Ball.

"By expecting £3200 to cover '46 bands and acts with over 250 individual performers over 42 performance hours' is naive at best, and it is disappointing to see that a ball with one of the biggest budgets in Durham is not dedicating more of its funds to these performers that play such a large role in the ball." 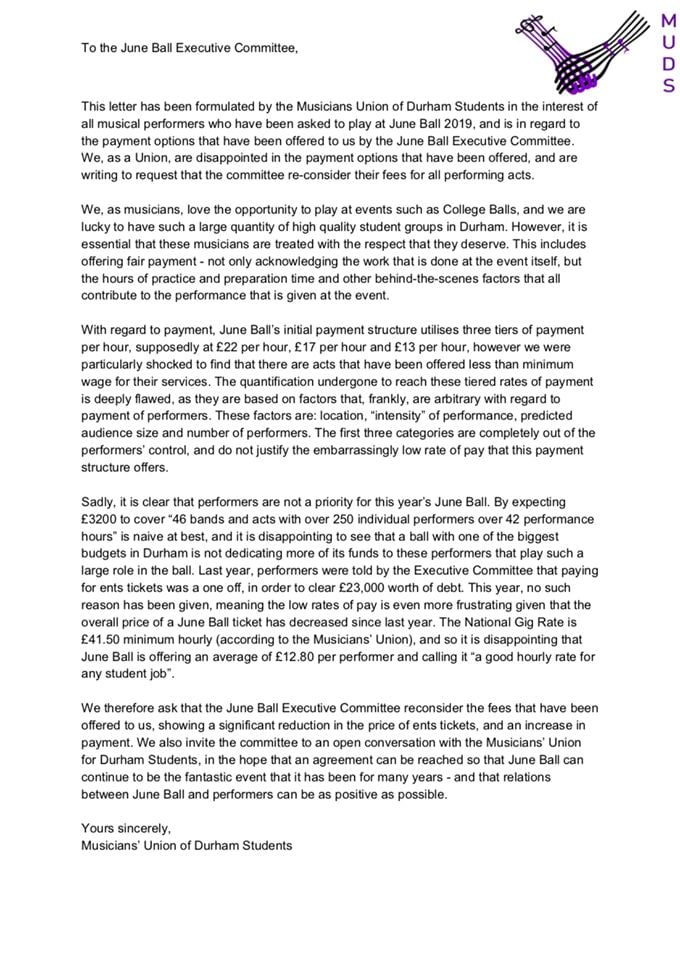 The open letter in full

The Vice President for the exec told The Durham Tab they would be meeting with MUDS on Thursday to find a solution, adding they were initially "too optimistic" in the number of performers the budget would allow.

She said: "There are various reasons why we set our prices as we did and various things we wished we had done differently in hindsight, but the last thing we wished was for anyone to feel insulted, taken advantage of or undervalued.

"Performers make June Ball the amazing event it is and we are doing everything we can to revert the situation we are in."

A link to MUDS's Facebook page can be found here.