Suspend your disbelief, ladies and gents

If you happen to have a Facebook account, chances are you’ll have heard of the notorious "MenSoc" at some point.

The society's online presence in past months has rendered it more synonymous with misogyny, arguments, and controversy. Amidst a series of scandals, including some heated arguments on Durfess, as well as a number of (now-deleted) posts on the Overheard Facebook page, MenSoc seems to have fallen off the beaten track somewhat. 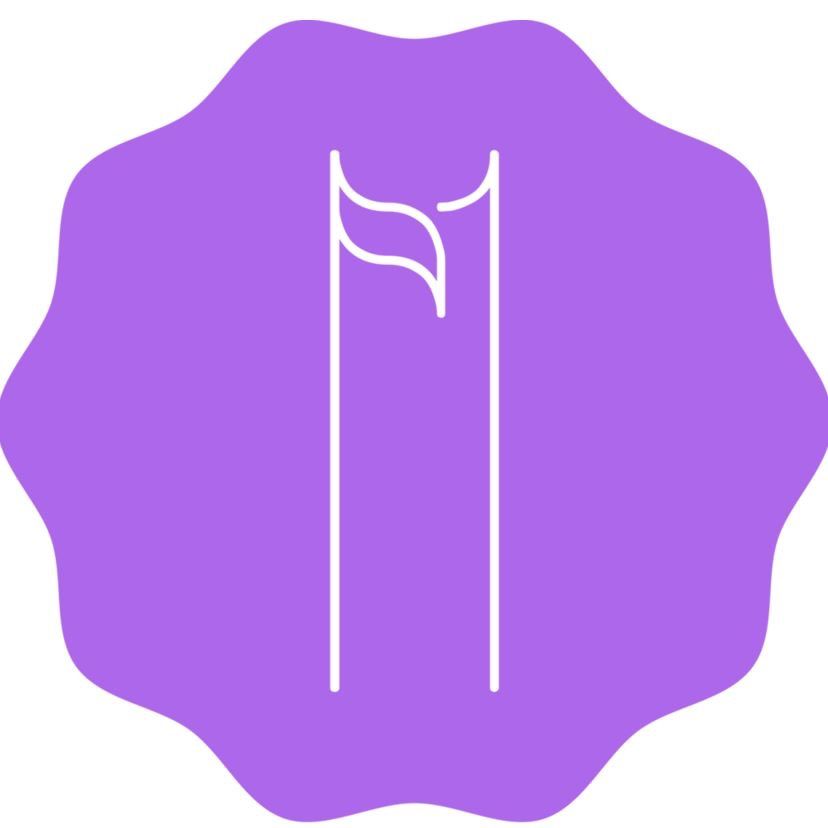 More recently, MenSoc has come under fire again, due to accusations that it is claiming to be a "DU" society, without having ever been officially ratified by the University. (For the sake of clarification, this isn’t something you’re allowed to do).

Though the MenSoc Facebook page’s URL is "MenSocDU", this is an accusation that was strongly denied upon our asking.

We caught up with its President, Sergey, to try and find out more about why he founded the society, what its aims are, and what it makes of the backlash it has faced.

Sergey told The Durham Tab that the society was created as a "project raising awareness about issues which are affecting men, and then society as a whole".

He said these issues include "fatherless boys who lack of role models, which leads to disadvantages for them as men, and rising crime stats among them."

He added that he wanted the society to provide a space for Durham students "to avoid dogmatic influences". He told The Durham Tab: "It did not seem to be taken very seriously when it was launched, and was even opposed by those who were afraid of it." 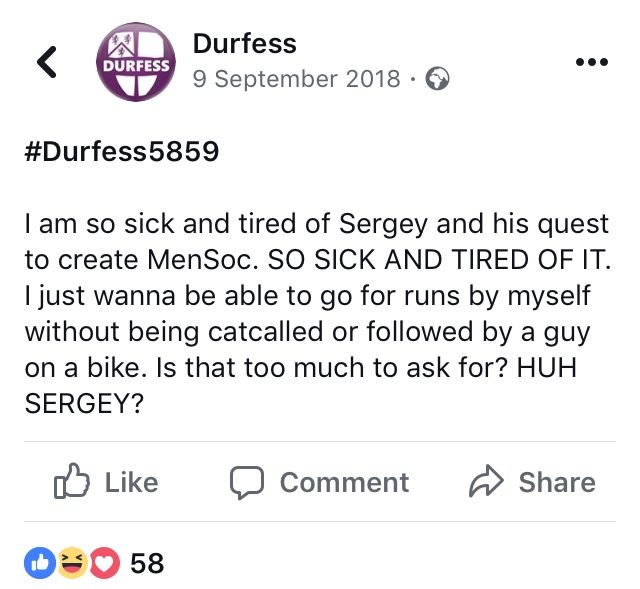 Most of his critics 'see the world through a feminist ideology', he says

Sergey blames the feminist thinking of the "deniers" for the backlash he's received. He told The Durham Tab the project is about "equality in the multi-gender environment of our society".

He said: "There were many unknowns, inconsistencies and things that feminism cannot explain or does not attempt to." 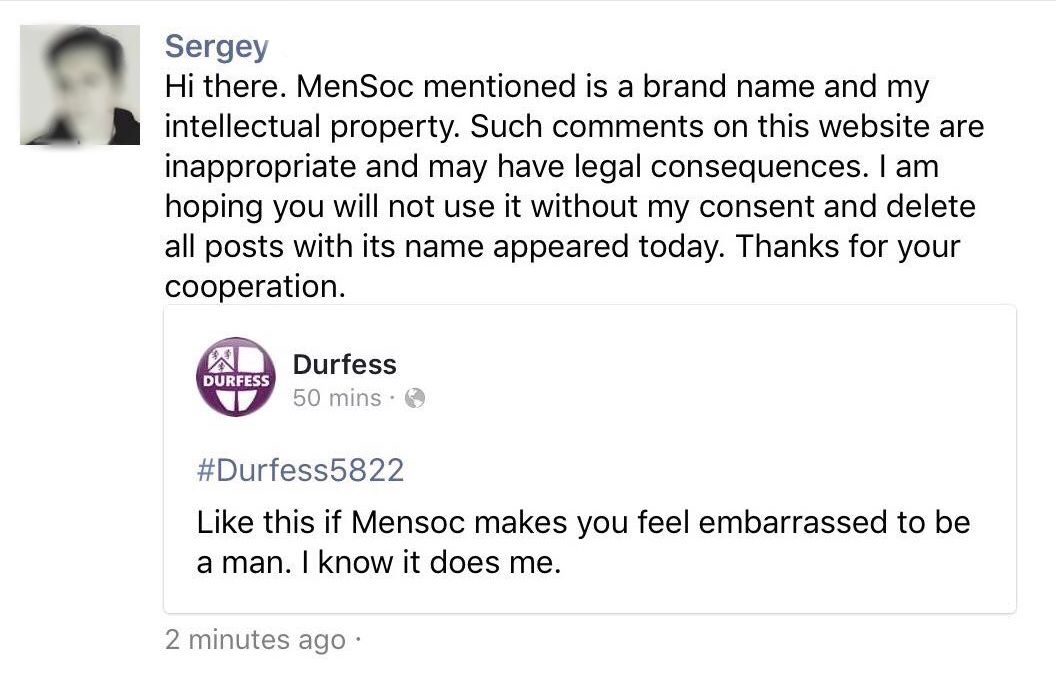 He strongly denies claims that it is a misogynist society

Accusations of MenSoc challenging the rights of women is one of the biggest challenges he says the society faces. When asked about whether there was any truth behind such criticisms, Sergey explained: "It was not intended to be misogynistic and it is not. Women, men and non-binary genders should be understood, respected and appreciated, that is what MenSoc is about."

When challenged about the supposed DU status of MenSoc, The Durham Tab were told: "It was decided not to apply for Durham Student Union ratification this year, in light of all the harassment which happened online".

However, he assured us that in the future, he may look into getting the society ratified. Undeterred by the delay, for now, he said: "Distance from the University and DSU gives much more freedom of expression in its current form".

Sergey understands that he can be seen as a controversial figure

On the topic of his heated contributions to both Durfess and Overheard at Durham Uni, Sergey acknowledged that, at times, his comments had been met with shock and disagreement.

Many of his most provocative comments have now been deleted from Facebook. However, he described one Durfess in particular involving a student asking for advice on an uncomfortable sexual situation they had found themselves in. Many students commented saying the incident was a case of sexual misconduct, Sergey disagreed.

Sergey told The Durham Tab: “Shockingly, it appeared that even though I was, many times, sexually assaulted in the past, and thought that I could present a justified opinion on this (without having to point out my traumatic past experience), in some weird way it appeared that I couldn’t express it without a fear of being harassed afterwards”.

Stating that the situation left him feeling as though his gender meant that others were less likely to agree with him, he added: "People were more concerned with what they wanted to hear, leading them to disregard something they heard from a cisgender male”.

Sergey stands by what he said. 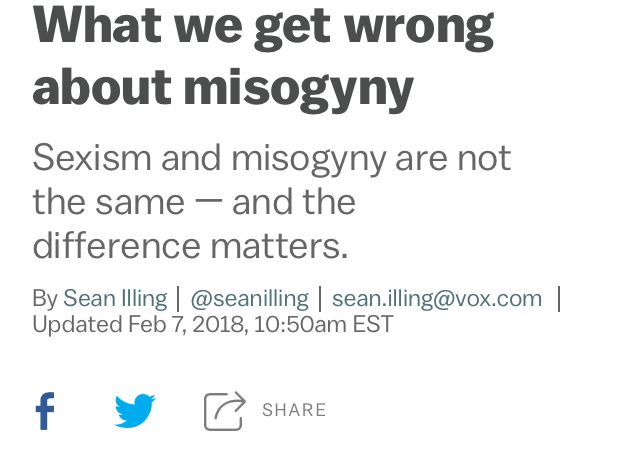 The definition of misogyny, he says, is 'much more different than mainstream opinions hold'

Towards the end of the conversation, Sergey returned to the concepts of radical feminism and misogyny, saying "mainstream opinions" of it are incorrect. He linked an article entitled: “What we get wrong about misogyny”, it seemed that the things we discussed were beginning to come full-circle.

For reference, its opening paragraph detailed how misogyny was “about controlling and punishing women who challenge male dominance”.

The controversy of the society is something which will probably always remain, and whilst our chat did indeed shed some light on the reasons for its establishment, it still remains unclear what MenSoc’s aims for its future might be.