It’s been happening since Michaelmas

Certain Durfess posts have been sent to the Durham Union Society for approval in advance, The Durham Tab can reveal.

This comes after accusations published on Durfess accused the Union of being nepotistic and undemocratic for having removed the only non-DUCA affiliated presidential candidate.

The DUS have demanded that either all related submissions to Durfess be sent to the "returning officer for approval," or that Durfess "desist from any further such posts" so as to not influence the outcome of the election.

An admin told The Durham Tab that DUS have “periodically” seen posts before they were published “since Michaelmas last year”, adding: “They wanted to minimise the impact on individuals, they have now relaxed their restrictions on posts.”

This came after a message to the Durfess admin claimed one post was "an attempt to influence the upcoming election rules, which will result in the disqualification of anybody found to have sent it to Durfess."

In message exchanges seen by The Durham Tab, one DUS member said: "The union has a constitution which is legally enforceable document in so far as it forms part of the Deed of Trust which is filed with the Charity Commission and which we are therefore bound to uphold.

“That constitution, which is being violated, including by a Union member during what is currently the election timetable.”

Members of the DUS have also complained about a Durfess post they believe to be a "blatant attack on an individual." The post in question included photo of several members of the DUS.

A DUS member then told Durfess: "I'm depicted in Durfess post #9175 without explicit consent in a post which marks a departure from not posting pics of students.

“If somebody clearly believes the Union is unfair, then it's utter hypocrisy for them to go and break the election rules… on those grounds I politely ask you to remove that post."

Durfess’s disclaimer states that photo submissions must have the consent of the people pictured. When the admin was informed that this was not the case in this instance, the photo was covered, and the post later removed. 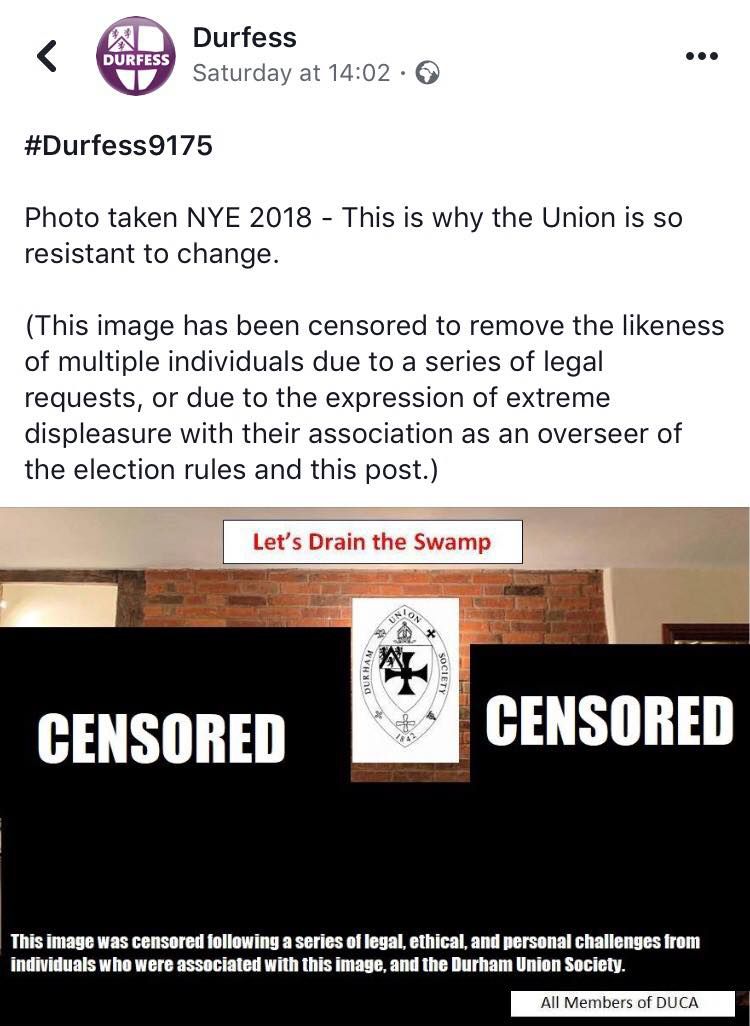 Rumours have circulated on Durfess posts that the DUS intends to sue the page. A Durfess admin told The Durham Tab: "We have a working relationship with both the Durham Union Society, and with the Durham University Conservative Association. This allows us to ensure that all posts meet our standard of containing fact.

"We interpreted a message from an officer of the DUS to imply imminent legal action – this has since been rescinded."

The Durham Union Society has been approached for comment.