Racism is an uncomfortable reality at Durham

“My speech will just be Enoch Powell’s Rivers of Blood”. This comment was one of myriad racist slurs from an Exeter law society group chat that have recently come to light, leaving many people in shock.

But it's important to acknowledge that this is just one example of racist discourse at so-called ‘elite’ institutions, all home to a privileged demographic. And Durham is about as 'elite' as it gets.

Listening to and highlighting the voices and experiences of People of Colour is conducive to meaningful anti-racism. We are Samuel Osman, Welfare Officer of Durham People of Colour Association, and Alisa Graham-Brown, its Campaigns Director. Our article is based on the experiences we, and dozens of others have had, here in Durham.

Since racism fundamentally comes down to power, it is often more damaging that people perpetuating it could be our future politicians, lawmakers and government officials.

If students of colour were taken seriously, there would be a commitment to eradicating racism on campus. But presently racism is only combatted when it is an issue of PR, rather than a genuine concern of student welfare.

In 2014, Durham Students’ Union voted to ban students ‘blacking up’ for socials. Aaron Kiely, then NUS’ Black Student’ Officer, told the Huffington Post UK: “I welcome the positive steps taken by Durham Students’ Union to challenge the deeply offensive practice of ‘Blacking up’ by passing this motion. Despite this positive motion, these events still occur and can’t be tackled solely by top-down solutions, they require the victims being listened to and the conscious unlearning of prejudice."

Mentioning race at Durham Uni is like farting at the dinner table. Racism is only taken seriously when there is explicit evidence, often accompanied by violent, almost pornographic depictions of POC being the victims of violence. In turn what this does is provide a platform for bigots, amplifying their voices and instigating arguments about ‘freedom of speech’.

Because if there’s any group that doesn’t have freedom of speech, it’s bigots. Racism at Durham University is far more common than people would like to believe. Wilful ignorance allows racist incidents to perpetuate themselves within more often than not ‘elite universities’ like ours.

Racism is not just an idea. It's a harsh reality 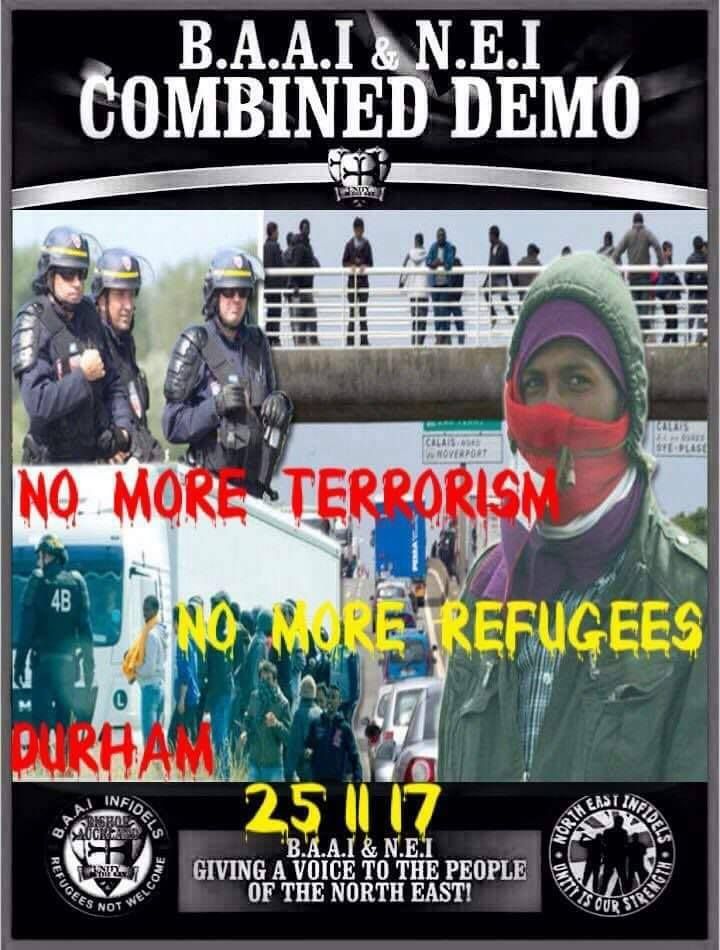 A flyer spread before a recent NEI/BAAUI protest in Durham

The majority of the time, students and the institutions they inhabit want to discuss definitions of race and ideological rhetoric that exists within the realm of ideas. But the experiences of racism for students of colour at this university and others like it, is a harsh reality rather than an intellectual exercise.

Students are quick to deny the existence of racism, and are reluctant to engage in an anti-racist narrative if it requires them to self-reflect and self-critique their actions and world-view. Racism is only perceived as real in overt circumstances; this is a dangerous false dichotomy.

The shock of the general student population in reaction the recent far right NEI/BAAI protests in Durham is illustrative of the general ignorance and denial of racism.

The fact that this kind of racism exists in the UK should not shock people, as racism is a daily experience for many PoC in Durham. How uncomfortable a lot of my white friends became when they heard about it is in stark contrast to the “oh, here we go again” attitude of many PoC.

There is now a toxic ‘Ideologically pure SJW’ stereotype attached to anyone who meaningfully wants to address racism. This stereotype completely ignores how tiring, stressful and potentially harmful standing up for yourself as a minority can be. We can all acknowledge that university is difficult, but do you think you’d do as well in your exams and seminars if you’ve been verbally harassed just ten minutes before?

Racism can be violent

How hard is it to believe that in order to be committed to anti-racism it requires listening to PoC voices, and allowing them to have spaces where they are not in fear of being ignored and delegitimised? If reading this has made you feel uncomfortable or attacked, ask yourself why.

Are you allowing your momentary experience of discomfort to stop you from actively engaging in anti-racism? Trust us, being called a racist isn’t as bad as receiving racism.

A selection of anonymised accounts from a recent survey carried out by DPOCA, in which PoC students were given the opportunity to report recent race-related incidents, indicates the prevalent ‘everyday’ nature of racism in Durham.

It's important to recognise that prior to 2017, there was no Durham People of Colour Association or African and Caribbean Society.

There was no organisation that existed to raise awareness of the issue of racism and hate crime at Durham, and this is obviously something the university is not going to want to draw attention to out of fear of tarnishing its reputation or dissuading BAME students from applying to an already under-represented institution.

But we're here now, and we cannot afford to be silent at the expense of the mental, emotional, and physical safety of the Black, Asian, Muslim and other targeted students that occupy this centre of learning.

One of the campaigns DPOCA is doing this year is #MyDurham, which will illustrate how what PoC deal with daily to pressure University administration to better care for its PoC community.

We encourage any students who have experienced a race-related incident to submit a report to DPOCA’s poll here. Or if you would like to support The Tab's campaign calling out racism across UK campuses, you can do so here.

DPOCA has a trained welfare team on hand, please do not hesitate to contact via message to the DPOCA Facebook page with questions, advice, or sign-posting.