Not your standard campaign tactic

Tom Harwood, a second year Politics student from Mary’s, is running a campaign to become an NUS delegate, and it’s unlike anything you’ve seen before.

His campaign video has been viewed more than 12,000 times on Facebook, with outlandish claims to “Construct a giant statue of NUS President Malia Bouattia, so that students in Durham can see how vitally important the NUS is to us.”

Most striking are his promises to “Use NUS Boycotts to Destroy ISIS” and “Bring down the government by means of violent revolution.”

He pledges to make “sweeping Agrarian reform a national priority”, and also promises to fight for Durham-specific issues, like bringing back the Quaddie, and cutting back the foliage surrounding our glorious Students’ Union, so that its architectural beauty is even more visible.

While his video and campaign page are filled with audacious claims, Tom explained this is all part of a clever subversive ruse. In a Facebook post, he said: “As the NUS is a ridiculous organisation, I will be running a ridiculous campaign.” 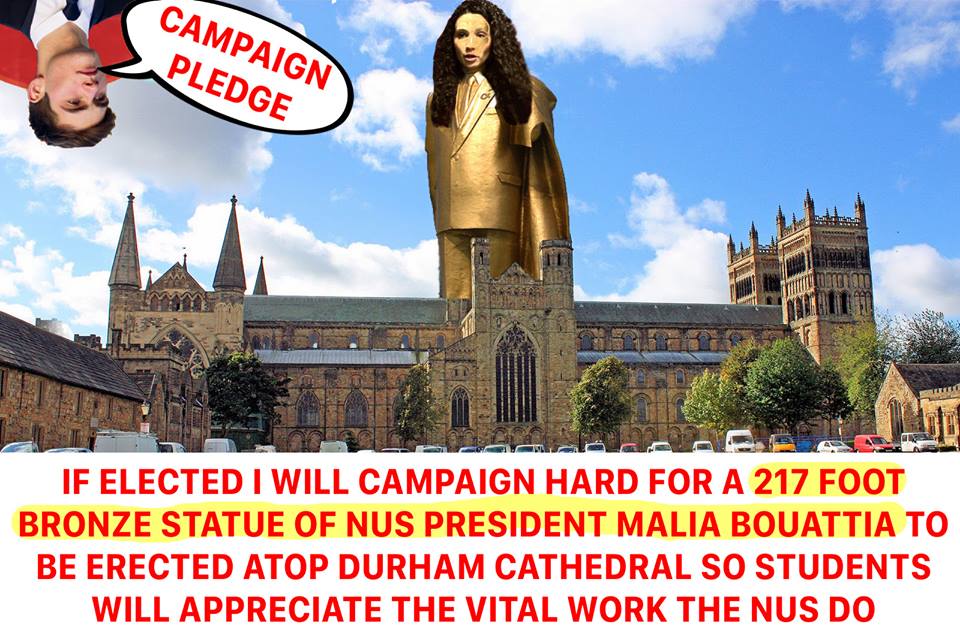 His video ends on a serious note, with Tom promising to be a voice of opposition at the NUS delegate annual convention. He pledges to vote against “all irrelevant, grand-standing, self-aggrandising, self-defeating NUS policies that only serve to discredit students as a whole.”

40 per-cent of Durham students voted to disaffiliate from the NUS last year – it’s clear there is a sentiment Tom could capitalise upon if he fulfils his pledge to be a subversive voice, representing real student views and issues at the annual conference.

There are four places for delegates and voting opens tomorrow until Friday, here.