He doesn’t even have Netflix

While you’re soaking up the summer sun in Spain, Durham Masters student Jake Newport, is living as a Stone Age hunter-gather in Germany.

The 24 year-old research masters student has been fascinated by everything hunter-gatherer since he was a kid, so much so that he couldn’t help but embrace the lifestyle itself. 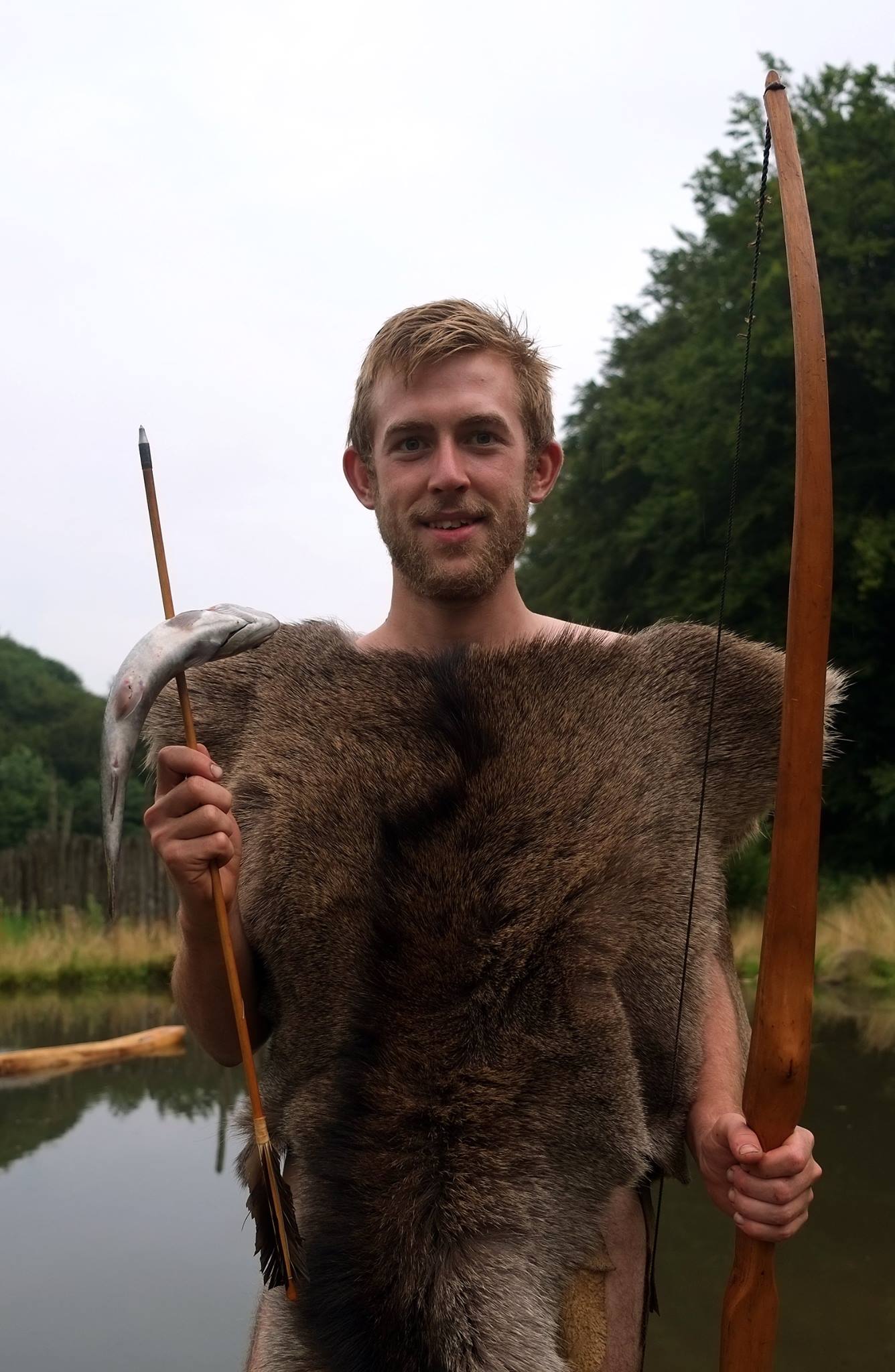 The Tab spoke to Jake to find out more:

Why do you live as if you’re in the Stone Age?

Since before I can remember I have been into bushcraft and survival. Some kids love football, some tennis, my thing was bushcraft. I was intrigued that animals seem to know instinctively how to survive, to hunt, gather and feed themselves; but many people left alone in the woods for an afternoon could easily find themselves in great peril. I wanted to learn to survive using my wits and what nature could provide. I have always loved a challenge and what could be more challenging than that?

Before and during my undergrad at Durham, I spent a lot of time further learning anything attributed to survival, from woodworking to basket weaving. I studied Archaeology with a special interest in the Mesolithic (the hunter-gatherer Stone Age). Every penny I saved I put towards travelling the world in search of new environments in which to challenge myself, and to meet indigenous peoples who could share with me their skills.

It was quite unsurprising that during the first year of my Research Masters, studying plant foods used during the Mesolithic, that I was invited to participate in the 6 week Living Mesolithic Experimental Archaeology project. The project took place on a 700ha site connected to a Living Museum in Albersdorf, Germany. 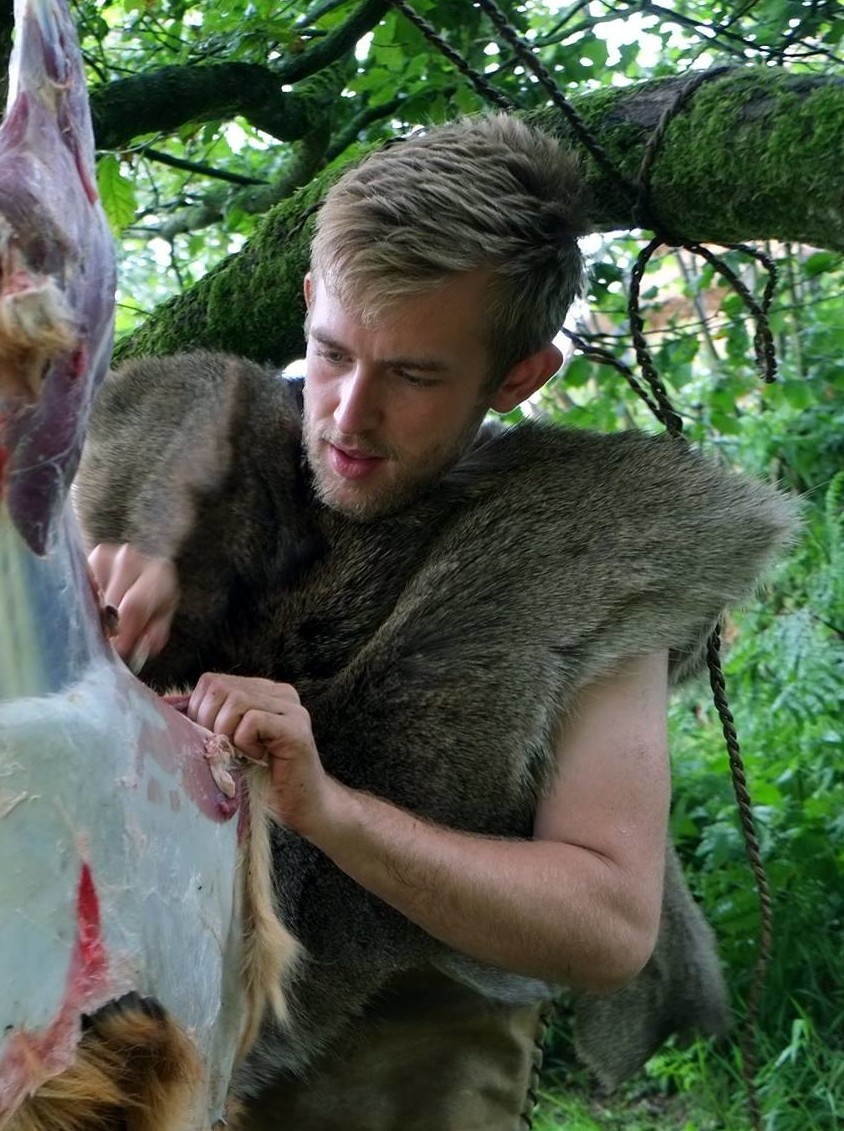 The aim was to bring together academic and practical specialists in European Stone Age hunter-gatherers, to live and breathe a Stone Age life in the name of archaeological research. I accepted the challenge, what could be better than pitching my skills at the most basic level? We practice bushcraft from the most primitive perspective, learning from other specialists, making and using flint tools, skinning game and tanning leather to make clothes.

During the project visitor numbers to the museum were record high with people trying to get a glimpse at our ‘tribe’ in action, and the project had also received a lot of attention from the press and television. Suddenly other open-air museums, universities and TV producers were enquiring about our movements and wanting us to do similar things in the future.

Following this life changing six weeks, myself and the other participants decided to found “Forest Seal – The Stone Age Skills Specialists”. Despite being the director of my own company, we are now planning something similar for this summer, over 8 weeks, at several sites including Northern Germany, Denmark and Finland. 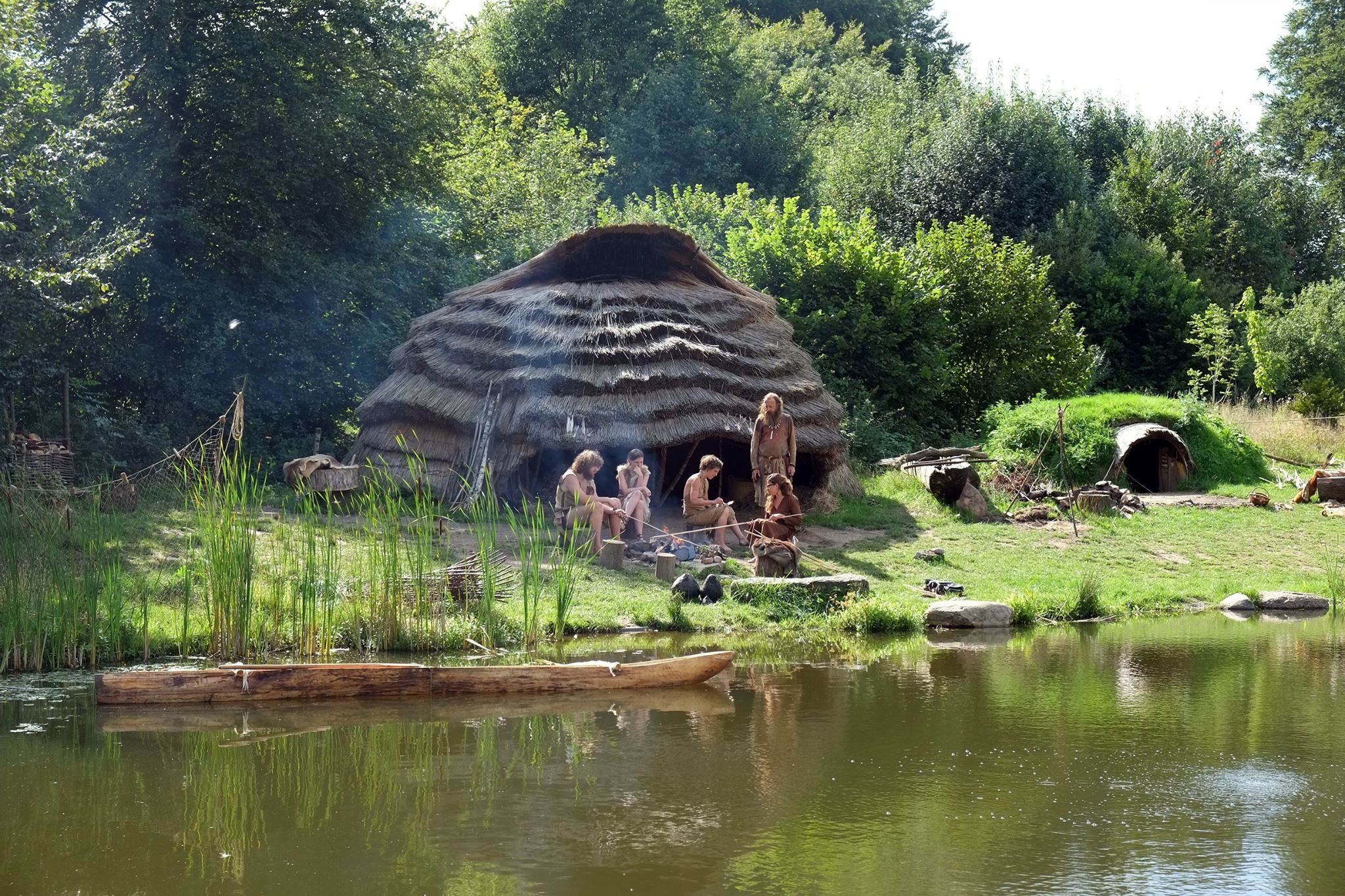 What is it like? How does it feel in the morning? Is it liberating, or is it exhausting?

It certainly takes a little adjustment. The first week was tough trying to establish where the best food sources were and what strategies we would put in place to procure it, so we went pretty hungry. Generally speaking it is incredible. To provide for yourself at that level is really empowering and knowing you can survive in your environment is really liberating.

Mornings are tough in the beginning too, but mostly due to caffeine withdrawal. I had sorted myself a decent sleeping set up with ample hides and raised bed area early on. The value of a decent night’s sleep cannot be overstated. Once you get over the lack of coffee and processed sugars, you feel really great. I hadn’t quite appreciated how much of an impact diet was having on my mental state until I participated in this project. Whilst there were days where getting enough food was difficult, I rarely felt hungry and if anything I felt more clear-headed and focussed.

Although you are always busy, rarely spending more than a couple of minutes not doing something, it isn’t really exhausting, more rewarding. When things did get really tough, the community spirit and camaraderie of our international ‘tribe’ helped to keep us all in a good place. 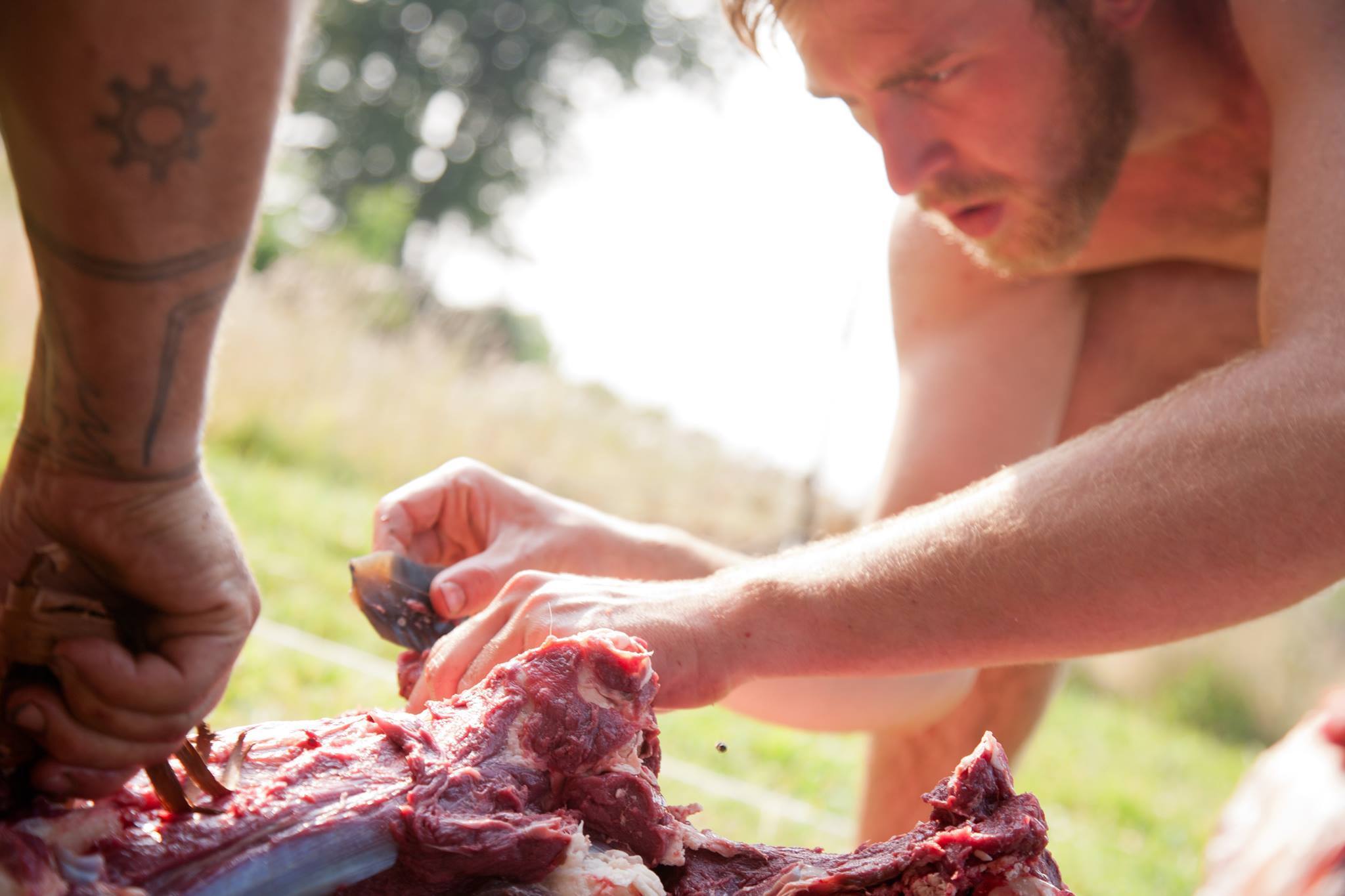 What do you miss most about “civilised” society?

The only things I really missed or found myself craving during the project was beer and pizza. I love pizza, but it is like a combination of the three least Mesolithic food available – bread, cheese and tomatoes. Whilst there were some bad weather days for sure, those glorious evenings after a long day don’t feel quite right without a beer in hand either!

What do you miss most about living in the Stone Age?

Tough question. I would have to say either the community spirit, or the sense of achievement of making lots of tangible things all day long. My ‘civilised’ job is a lot of online work and it is far more difficult to appreciate the time and effort that has gone into your days’ work when it is just a series of ones and zeros on a hard drive. When you can see the fruits of your labour in things you have physically created, it feels a lot more rewarding. 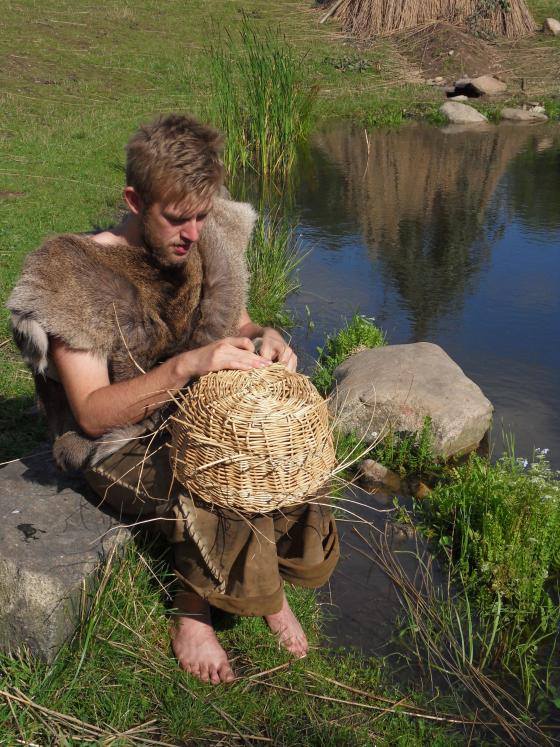 What is your favourite thing about living in the Stone Age?

Without a doubt it has to be learning and sharing Stone Age survival skills. Forest Seal brings together specialist in all kinds of skills from a Namibian tracker/bow hunter who works with the San Bushmen in the Kalahari, to one of Europe’s finest flint knappers who can make almost any tool from a stone. Learning from these highly skilled people in such an immersive environment is a gift and a real honour.

If there is one thing that you think people could take into living in “civilised society” from living in the Stone Age what would it be?

The diet. Although most modern ‘Palaeo-diets’ are fad nonsense, eating a diet comprising of meat, nuts, fish, mushrooms, roots and wild salad is a great way to be healthy. I think eating a really large variety of fresh plant species and getting my main carbohydrates from hazelnuts, great reed mace rhizomes and acorn flour had a really positive effect on my physical and mental health. The whole experience made me much leaner without losing muscle mass.

We often have a plentiful bounty of food in our close vicinity that we are leaving to waste in favour of foods grown on the other side of the planet. I’m not suggesting we return to the wild to graze on edible plants, and foraging is not without its risks, but if we all ate a bit more gathered foods we would be healthier and the planet would be better for it too, no doubt.