Durham station to get a Micropub?

A one room pub might be built in the Durham railway station, after planning permission was submitted for a ‘micropub.’

The so-called ‘The Dunelm Tap’ would open every day at 12 until 10 PM serving pints right up until the last train to Toon.

The application for a pre-train boozer was submitted by Middlesborough-based James Nicholl to operated in a storage area on the northbound platform. 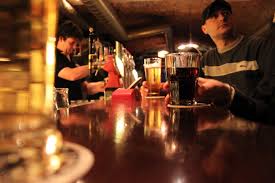 Focussing on pulling top quality pints without the usual music and games, the micropub is the micopig’s boozier cousin.

Durham was once free from a plague of lads saying they’re going for a ‘little drink,’ until micropub ‘The Station House’ opened last year on North Road. Now they might have competition.

If you’re bored, have nothing more important to care about, or are simply miserable: you can complain until the 27th of January. This is before mid February when we find out how insignificant the council found your comments and hopefully approves the micopub.

Until then, here’s to a pre-Toon pint. Choo choo.