This WILL get you in the mood for the festive season

Whatever the definition, one thing is a fact: good children get presents delivered by a fat, jolly, bearded old man who climbs down their chimney every year riding in his sleigh, driven, not by any ordinary propulsion system, but by nine ludicrously named reindeer. Some would call it grooming, others call it Christmas.

It’s logical to assume that to maximize time, Santa Claus travels from east to west. Thanks to the different time zones, this would give him about 31 hours (111,600 seconds) of Christmas for present delivery and mince pie consumption. 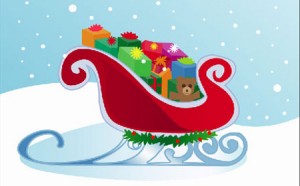 Let’s assume that there are 2 billion children in the world. The harsh tyrant that he is, Santa doesn’t deal with Muslims, Jews, Hindus or any other religions, leaving us with 378 million children (according to the Population Reference Bureau). A BBC survey in 2007, estimated an average 1.8 children per household, leaving 210 million family homes that suit Santa’s strict criteria.

If only half of the specified houses contain ‘good’ children, we are left with 105 million houses. Using these approximations we can calculate that, on Christmas, Santa visits a feeble 941 households per second.

For the sake of ease, I’m going to ignore three key variables. Firstly, that the payload of the sleigh would be over 400,000 tons due to the sheer amount of presents. Secondly, the idea that Santa has somehow genetically engineered his reindeer to fly, travel at super speeds and support 400,000 tons of weight between them. Finally, the fact that Santa travels at over 3,000 times the speed of sound so he should theoretically instantaneously vaporize due to the immense air resistance.

Traditionally, children leave carrots, mince pies and milk on Christmas Eve to thank Santa and his army of reindeer. Considering that once a year the big man eats half of each mince pie, therefore consuming a hefty 470.5 million mince pies, it’s safe to say that he is most likely obese, diabetic and would have various other severe binge-eating health related issues. His face would be so large due the amount of stored fat, that any expression would be lost. This could potentially be a reason for any who have seen Santa to have described him as seeming ‘jolly’. 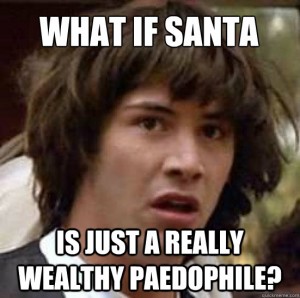 With major advances in technology and the creation of the extremely influential ‘World Wide Web’ one would question why Santa doesn’t buy and send his presents via courier. Whether he does it because of an underlying fetish for danger involving visiting children, or just out of tradition and true altruism from his big unhealthy heart – there is no dispute that he is, and always will be, the true spirit of Christmas.