A Taste of Bass

On her Tab debut, Iggy takes you through the soundtrack of a Big weekend. 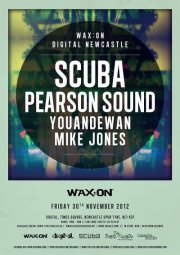 Digital is not a bad little venue at all considering the kind of events it holds. Recently Jamie Woon, Diplo and MSTRKRFT have graced their decks- so there has certainly been something on for everyone at one point or another. Scuba sent the crowd mad on Friday night, although Pearson Sound (formerly known as Ramadanman) set the mood right to begin with. I’d certainly recommend checking out what may interest you in the future and visiting, there isn’t much of an excuse not to as it is so close to Durham!

Scuba was playing at The Warehouse Project in Manchester the following evening, however it was difficult getting into the room which he was at. As he was one of the main acts again, this part of the venue was insanely busy so Digital was certainly a good choice the previous night.

Blawan absolutely killed his set, and weirdly, took requests! Check him out if you haven’t already, although this is a bit like advertising old news (his “Getting Me Down” was Resident Advisor’s best single of 2011).

Now this is currently the track played by so many. Julio Bashmore hit it towards the end of the night which was definitely a good choice, some people actually stopped powdering their noses so they could sing along…

Joy O – You Make Me Weak, You Make It So Good

And finally this track by the man himself is really lively! Perhaps already familiar to some because it was Nick Grimshaw’s record of the week a couple of weeks ago- if not, get downloading!