“A very enjoyable piece of theatre and a great evening out”

Before I write this review, I will issue it with the disclaimer that “Je ne sais pas anything about Molière’s Tartuffe”. Having now seen it, I suppose it is a farce and probably a commentary on social norms at the time it was written, but I don’t know and I suspect some of the nuances of the play which would have been hilarious for a French literature student were lost on me. Disclaimer aside it was a very enjoyable piece of theatre and a great evening out.

Castle’s Great Hall provides the perfect setting for this play (as an aside, the foreword by Seif El Rashidi brilliantly encapsulates why the Great Hall, and – more generally – the castle, is such a good setting, but I’ll let you read it yourself). In a sense, however, the drama begins before we’ve even got there. I imagine it was a purely practical consideration, but having the audience grouped together in the undercroft before being officially taken over to the great hall lent a certain sense of formality to the play (as did the opening dance) and this really helped me to get into the spirit of things; it felt as though I, personally, was an important state guest and the jig was being performed as much to introduce me to the actors as the actors to me. 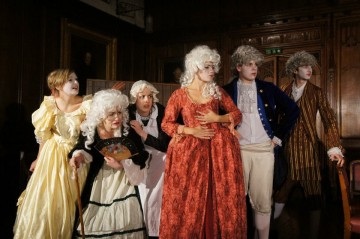 This is where, unfortunately, I must include my biggest criticism: while the setting harked back to an era of past decadence and the rulership of a capricious and power-hungry elite, the set looked like the trappings of a Benedictine monk. Perhaps this was a clever nod to Tartuffe’s alleged piety and stoicism, but, for me, this rather bland set was one of the biggest weaknesses in the production as a whole, and only just stopped me from feeling fully involved in the drama. It seems an easy choice to set a period farce in a luxurious, oak-panelled room and let the audience buy into it, but I wasn’t convinced. The staging provided the bare-bones; everything that was needed to run the performance and nothing more, and I felt this sparseness very much detracted from the aesthetic in a play where decadence is clearly the order of the day.

The lighting was another area which was stark and simple, but in this case, the simplicity was very effective indeed, and helped to focus the audience’s attention on particular points at key moments, without feeling intrusive, a feat for which lighting designer Ophélie Labrasseur deserves praise. Similarly, the house lights during the opening dance seemed to provide a certain feeling of immersion, which, as stated earlier, gave me the impression that I was being introduced to the actors and was very much a part of the production. 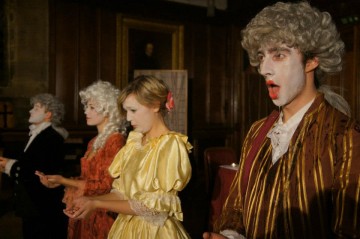 Ultimately, though this play rested heavily on one particular aspect, which was the ability of the cast to draw the audience into the drama and I’m happy to say there absolutely was not a weak link, which was one of the key strengths of the performance. A play of this energy and pace needs tireless effort from the cast and no actor ever seemed to slow down or drop the ball. There were, however, certain actors who particularly stood out. James Hyde’s portrayal of the capricious Orgon was pulled off with wonderful physicality and flawless comic timing, and provided the perfect counterpoint to Elissa Churchill’s Elmire, whose scenes with Tartuffe (including the hilarious seduction scene) were brilliantly well-pitched. Hannah Howie’s decrepit Madame Pernelle was also excellent, as were Nat Goodwin and Michael Galea, whose early scene was one of this reviewer’s favourites. Finally, though, and his reputation surely proceeds him, was the magnificent Tartuffe, played by Adam Phillips, who managed to pull off both his scheming deviousness and po-faced sincerity with a vigour which never failed to amuse.

AND THE BOTTOM LINE – I’d recommend anyone with a decent sense of humour go and see this show; the blistering pace will ensure it doesn’t outstay its welcome, and the brilliant acting and hilarious script will keep you laughing the whole way through.