From college to cribs, living out in second year proves a challenge

As October arrives each year and the exodus to Durham begins in force, the tumbleweeds rolling through the Viaduct through the summer months are dispelled, and a new band of Second Years, feeling decidedly smug to have shifted the title of ‘Fresher’, move in to their new student cribs.

The hasty house-hunting of the year before had drifted into distant memory. Pulling that dreaded number out of the hat, watching Nadal crash out of Wimbledon, or in some rumoured cases, producing the lowest sperm count (‘The most fertile one will put their room to the best use obviously’), led to a few tantrums.

But the cruel reality of living in a box room only strikes home when those doors open. Even for the most house proud and savvy student, the change from college to house was never going to be a completely smooth transition.

The ease of transition often rests upon the game of landlord roulette. Some students have been lucky, with bottles of bubbly on arrival to their new homes and friendly responses to requests for more shelves or new mattresses to replace their well-worn predecessors.

Some, however, are not: accounts of smashed showers still unfixed from summer, broken boilers and slug infestations, to name a few. What we would advise: Persistence is key. 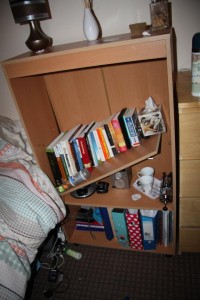 Undeniably, one of the most exciting perks to living out is the ability to party late after Durham’s clubs have shut their doors. From the Viaduct to Claypath, house parties have been in abundance even as the dust settles from Fresher’s week.

There have been a number of dreaded white notices seen on student doors that constitute noise complaints. Whether it’s pre-drinks or an after party, a night surely can’t be successful unless there is some form of complaint from locals or students.

Although seemingly a good idea at the time, waking up to a house smelling of garlic mayo and with empty bottles littering your living room can make households think twice about hosting.

As much as the ease of rolling out of bed in college and crawling to the dining room to push some food towards your face had it’s redeeming aspects, it seems that most students have found the shift from college to cooking surprisingly easy.

Rumours of roasts to rival those seen in the Great Hall at Hogwarts suggest an apparent refusal to cave into the student stereotype of takeaways. However, it’s impossible to ignore the nights of Cheerios or beans on toast that are an unavoidable and integral part of the student lifestyle.

Undisputedly, there is significantly more room for gourmet flair (or should we say, experiments…). Let’s just say that our college caterers never proved sufficiently sculptural for some tastes.

One of the more creative student constructions we have witnessed: A mash potato landscape, equipped with broccoli trees, a baked bean river, a blue WKD lake, and scattered with Turkey Dinosaurs to ‘y’know, roam around.’ Masterchef eat your heart out. 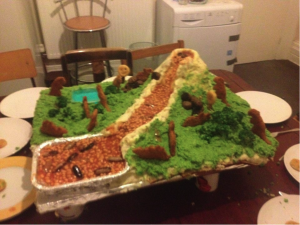 And the biggest difference compared to college life? To borrow the words of Destiny’s Child: Bills, Bills, Bills. It is so easy to take for granted the constant presence of water/electricity/internet, that it can be a shock.

Phoning BT on the day of our arrival to finally ask for an ‘Internet man’ to come and ‘give us some Internet please’ has meant that has been two weeks and we are still Internet-less, awaiting with baited breath the engineer’s arrival.

The process of becoming that little bit more independent is, suffice to say, a work in progress.

As we are still a fresh-faced two weeks into term, we realise that the novelty of this new independence may wear thin when the bills roll in and the student loan runs out.  For now, however, living out is definitely delivering.