This summer Kronos Productions enchanted the Edinburgh Fringe with Oscar Wilde’s Salome. Daisy Cummins went to see what was drawing their audiences through the door.

Understated and downplayed, this production bears all the intensity and depth that the legendary woman herself possessed.

Co-directors Ben Weaver-Hincks and Felix Stevenson played their cards safely, choosing a truly beautifully written play. And who could blame them? Producing a classic risks displeasing those with preconceptions, but for Kronos it pays off. We are simply captivated.

Salome provided well-deserved exposure to some of Durham’s most promising actors; Felix Stevenson as Herod gives an outstanding performance, Charlie Warner weaves his magic into Jokanaan, Grace Cheatle performs a simultaneously innocent yet chilling title role, whilst Cecily Money-Coutts flaunts her skills as the brutally calculating Herodias. With such well-crafted, complex and crucial characters, one could not help but pity the other skilled actors whose characters lack the dialogue required for any serious depth.

Featuring onstage throughout the entire performance – washing clothes, counting money and playing cards – Iona Napier, Olivia Fox, Mike Clarke, Ed Cherrie and Joe Burke portray the constant tedium which consume their characters. And yet, these actors all brilliantly demonstrate an endurance and determination to keep their characters fresh and interesting to their audience. Their constant presence on stage establishes spatial tension – the proximity of the people’s hardships to the ignorance of their indulgent King.

The production, very effectively, implies a similarity to the current Middle-Eastern situation. The conceptual link to the Arab Spring is well reflected in the males’ modern day camouflage clothing, though whether Herod’s corruption is intended to mirror the tyranny of current African state leaders or their rebel counterparts remains unclear. Other costumes however fail to depict modern Syria: Herodias’ dress too high-street Greek chic; the girls’ dresses too short for Arabian slaves. 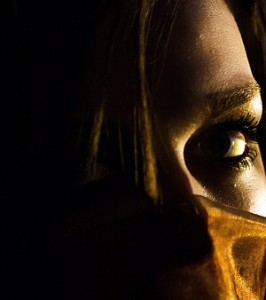 Such issues are nevertheless minor as our attention is consumed by the actors who stand at our fingertips in the intimate venue. At times, the space seems cramped, even with its simple set, illustrating the lack of luxury in militarised rebel camps. The consequent irony of royalty using tin bins for thrones is superb considering their inner corruption and tendencies towards decadence.

Stevenson and Money-Coutts, playing the royal pair, are highly commendable. Every lip curl, brow rise, and telling glance oozes with character. However the mother-daughter bond could have been further explored for little love was apparent between them.

Cheatle’s portrayal of the notorious temptress is subtle and, by avoiding melodrama, induces an uncomfortable sense of reality. For such an innocent-faced actress to convincingly convey Salome’s savagery is unnerving – especially at such close proximity. Through cold and fascinating eyes, Cheatle holds us as spellbound as Salome holds Herod in the script.

Warner’s performance as Jokanaan too possesses a magical quality – his address into the spotlight is both aurally and visually arresting. The arrival of Jokanann’s decapitated head, impressively so similar to the actor’s own, permits belief in Salome’s macabre longing for intimacy – a truly grotesque act yet disturbingly sensual.

Though the mystery of Salome’s allure is heightened through the symbolic nature of the dance of the seven veils, it could afford more explicit sexuality – the gravity of dancing for Herod maybe merits a little more than a routine implying temptation.

Overall, Kronos Productions offers a thoroughly enjoyable performance; well paced, tense, and engrossing. The intimacy of the venue perfectly exhibits the actors’ total conviction with character and their skills in its execution. The bar has been set; let’s hope Kronos continue producing shows equally enticing as Salome.

What they said
**** Scotsman ‘a skilful production that flows from start to finish’
*** Edinburgh Guide ‘This is a good play. It just should have been a great one.’
** Broadway Baby ‘lacked the bite and intensity that is so required of the play.’
** Three Weeks ‘It’s not terrible, but it’s been done before, and better.’