One message reads: ‘Her pussy is so wide you could fit a bus in there’

Members of the Coventry University Cricket Club have been sending messages in a WhatsApp group chat where they rate girls at Coventry Uni they've slept with.

Screenshots of the group chat obtained by The Tab show one member of the cricket team rating a girl he had slept with out of ten across various categories.

He rates her out of ten for her forehead, face, ass, sexual creativity, sexual skills and then gives an overall score.

He also rates her personality as "non-existent".

After the list of numbered ratings, the male Coventry Uni student gives a description of the sex: "[Her] pussy [is] so wide you could fit a bus in there, massive flaps," before adding, "what a slag". 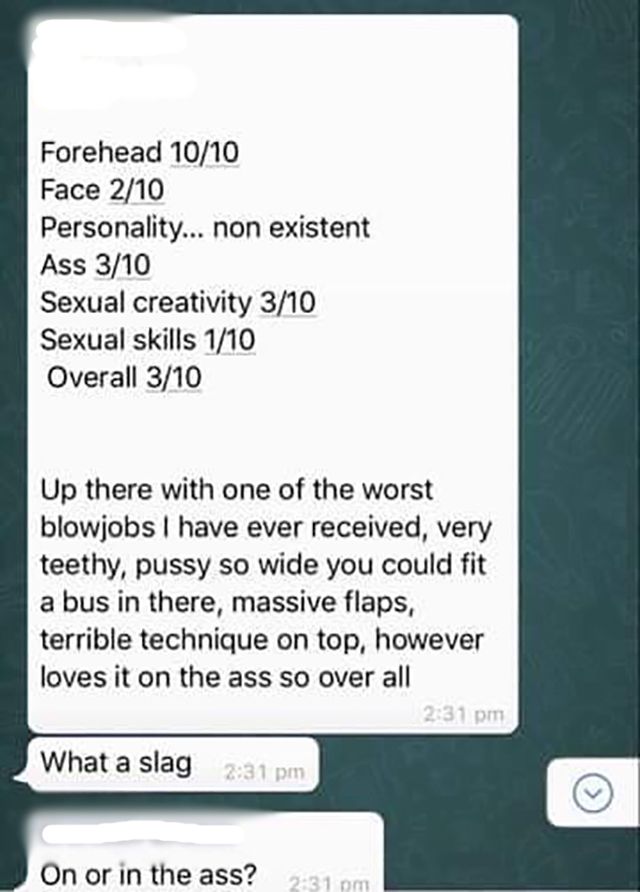 The Tab understands members of the cricket club regularly rate girls they've slept with on the boys group chat.

The male Cov student then refers to himself and the other club member as "#CUCCLegends", CUCC being the acronym for Coventry University Cricket Club.

More screenshots include another cricket player stating: "Majority of birds at Cov are rough as toast," and the student who posted the long rating above adding that the club will beat an upcoming opponent and then "shag their birds too".

The Tab understands one girl has approached the Coventry Union Students' Union (CUSU) about the group chat but whether a formal complaint has been issued or whether the Union have begun an investigation is currently unknown.

The University of Coventry told The Tab: "The university takes issues of this nature seriously and any allegation would be investigated in line with the university's relevant procedures."

CUSU have been approached for comment, and to ask whether they plan on disciplining the students involved and what specific action will be taken, but they have not responded.

Coventry University Cricket Club have been approached for comment but have not responded.

The individual club members who sent the messages have also been approached, and offered the chance to apologise, but have also not responded.

We will bring you more on this story as we have it.

Do you have any extra information about the cricket team's group chat?

If you have any more screenshots of sexist messages sent in this group chat or information regarding the situation, please get in contact with us, we will keep you anonymous and not reveal your identity: [email protected]